Today, I'm sharing a layout as a cautionary tale; the lesson here is to make sure you choose your adhesive wisely. You'll see what I mean in a minute. This layout features some photos from an amazing volcanic sand beach in Plaka, Greece. I remember Plaka as a VERY small town pretty much in the middle of nowhere. I encountered it in 2010 when I took a group of students on an international trip to Italy and Greece. There were only 9 of us in all, so it was an intimate trip in a way that groups of 25 or 30 just can't be. On this layout, I feature a beach pic of about half of our group. (The other half were off doing something else during this time, but I'm usually game to go to the beach at any point. I won't post pics of me in a swimsuit, but I'll definitely tag along.)

I still really love this layout EXCEPT for the fact that my adhesive wasn't strong enough for the rubber embellishments I used. Unbeknownst to me, the adhesive loosened, and some of my embellishments have fallen off and been lost. Bummer, dude!  Word to the wise - use an adhesive designed for the kind of embellishment you are using. In retrospect, I probably should've used a liquid glue like Glossy Accents or something similar.

This is a one page design that is built on cardstock, something I rarely do anymore. I still really like the graphic, lined patterned paper on the right, and I'm glad that I incorporated two photos on the page. The journaling is adequate, but it isn't anything special. I'm glad I have the minimum of information included, but I probably could've done a better job of describing the place and our activities. For example, I should've mentioned that the beach and water were so rocky that I really needed to wear shoes in the water to avoid cutting up my feet. I could've mentioned how we traipsed down a path winding down on a cliff to get to the water. I could've talked about how the "road" to our hotel was basically packed dirt - thankfully, it didn't rain a bunch while we were there. I could've mentioned how this part of the Mediterranean is apparently prime shark bite locale, even though I didn't know it at the time. Or maybe I could've described how cool the water was in contrast to the hot, dense air around us. 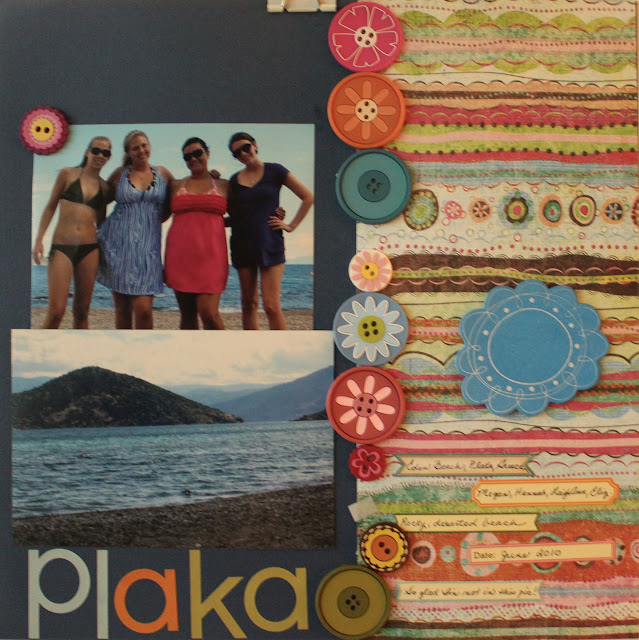 I still really like the letter stickers I chose for my title because I think the size fills the space nicely and the mix of colors draws attention to what is otherwise a very plain font. 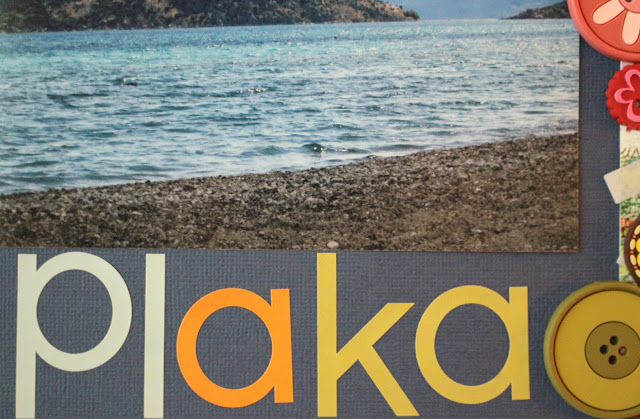 The strong vertical line of embellishments is a technique I'd definitely do today, although I probably wouldn't use all the same sizes these days. Those are some pretty large embellishments I have stacked there. Maybe one or two large pieces with more small pieces would've been a better choice. 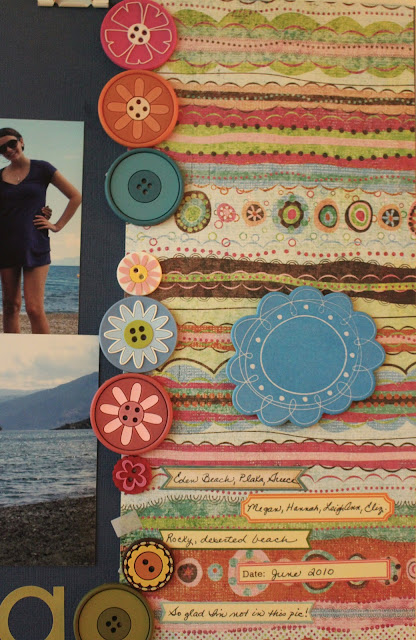 Here's a close-up look of the journaling that I did include. 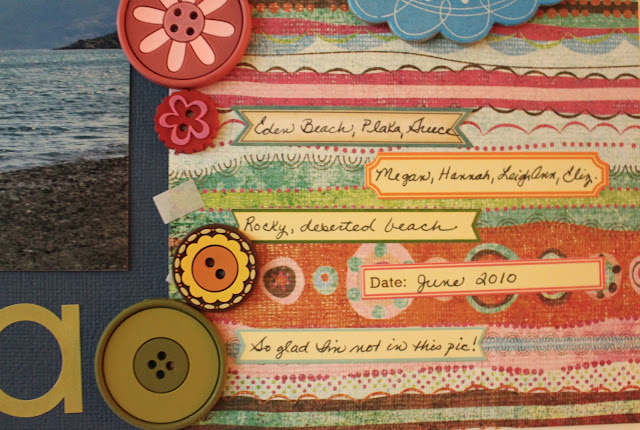 The question at this point becomes whether I do something to 'fix' this layout or whether I leave it as it is and simply learn a lesson from here on out - what would you do?
Posted by Tiffany Lowder at 12:00 AM