Sharing a layout - using your stash 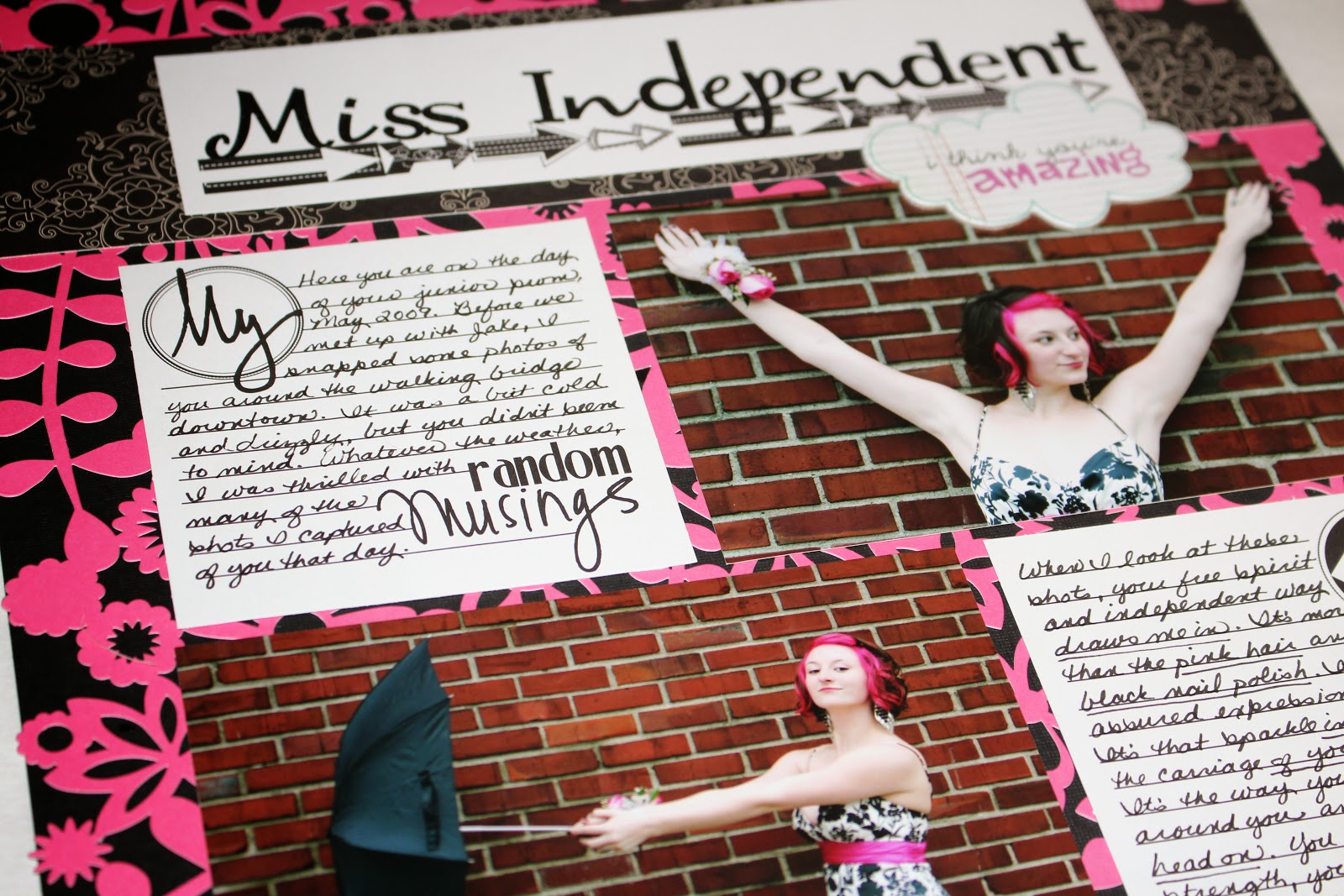 In this week's podcast, Tracie and I discuss mixing old products with new. In light of that, I thought I'd try to 'shop my stash' and use some old & new product together. I had a couple of pics of Kelsey on the day of her junior prom glamming it up for the camera. While I've already scrapbooked her actual prom photo shoot, I thought a layout about her personality would be a great match to these photos. With that in mind, I chose two photos of her that I thought were particularly good. I wanted the layout to feel timeless and young, free-spirited and fresh. Keeping that in mind, I headed to my stash. 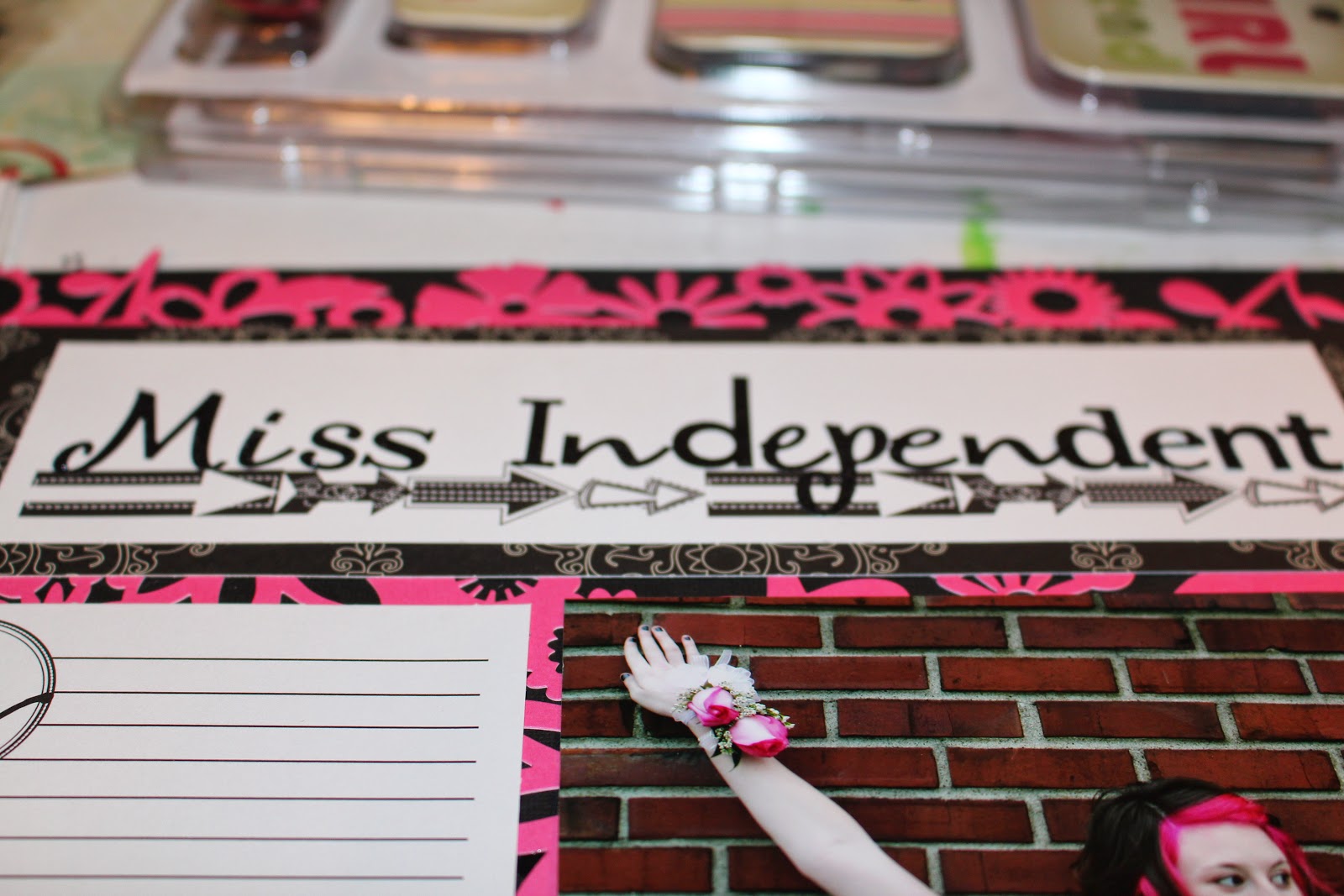 I started by choosing my papers. I began with black card stock and added this cool laser cut paper that I know is several years old. That pink was the perfect color pink of Kelsey's hair, sash, and flowers. Because I wanted to add a little more visual interest, I added the strip of damask printed black paper that was oldddd as well. (Idk how old but it was super thin; that's usually a sign to me that it's a few years old at least.) 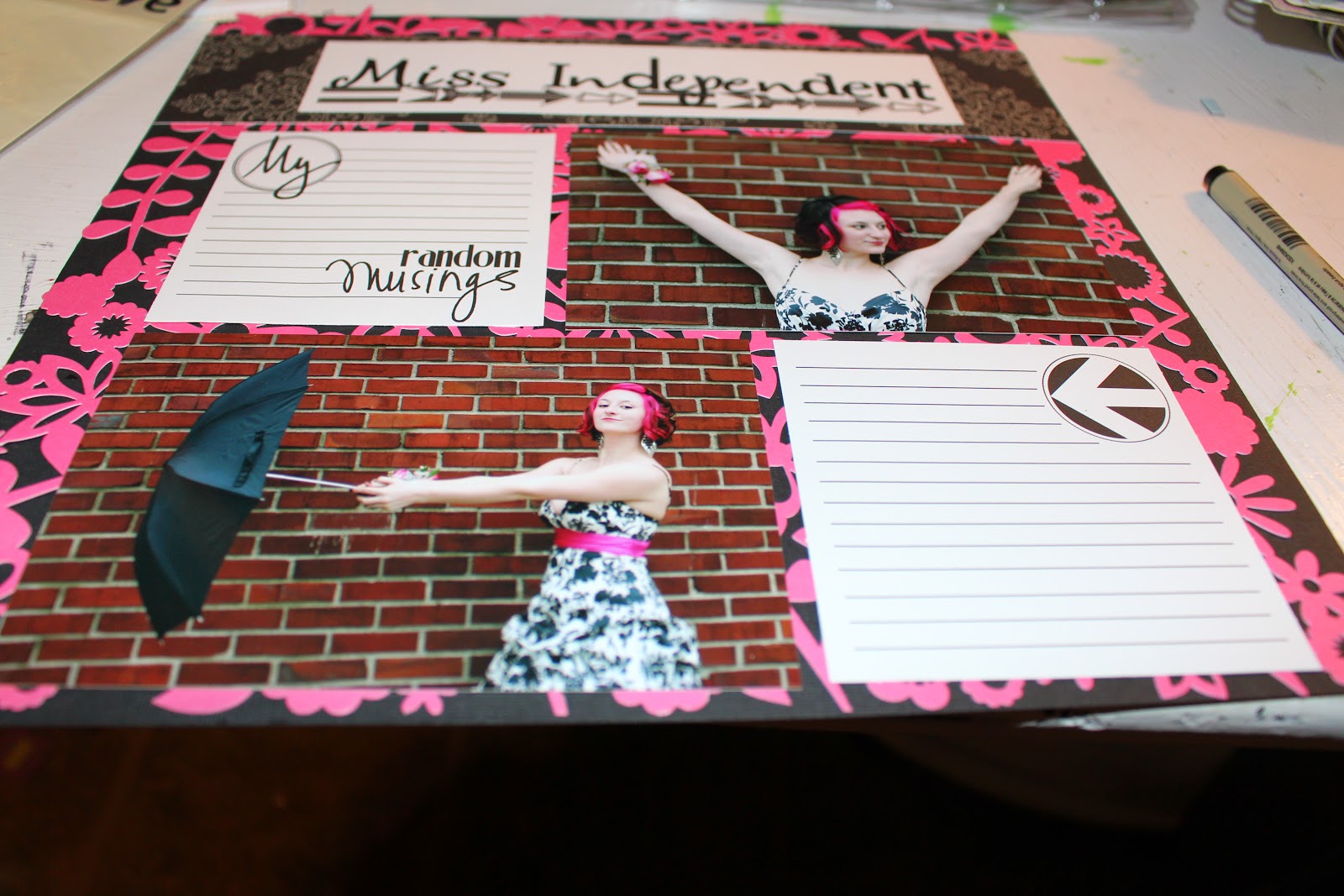 In designing the layout, I just played around with my pics a little. I knew I wanted plenty of space to journal, so I needed to leave room for that. I found some old diecut journaling spots by Luxe - again several years old - and used those in my design placement. When you look at it, the basic design is a flipped grid - what's on the left at the top of the layout is on the right at the bottom. I made sure that my gutters between elements and the edges of the layout remained fairly consistent because I think that helps unify the layout. Likewise, limiting the color palette to just black, white, and pink gives the layout a graphic, modern feel even though the products themselves aren't brand new. 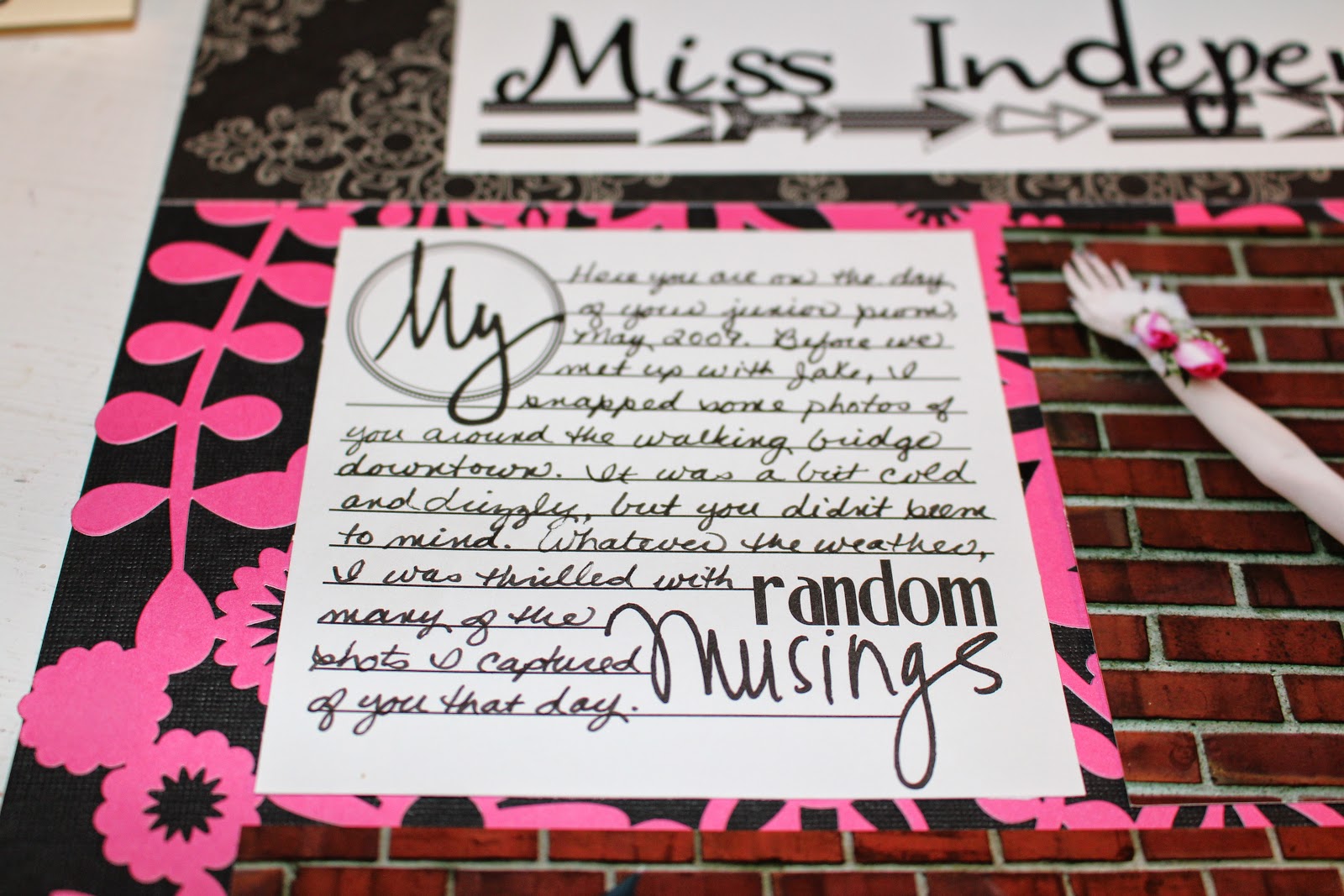 While the pic is from 2009, I told the 'story' from my perspective today. I summarized the fact that it was a prom photo shoot, but the meat of the journaling is really about what these pics tell me about her personality. This time around, I wrote my journaling directly to Kelsey. I don't do that often, but I thought these photos lent themselves to that approach. 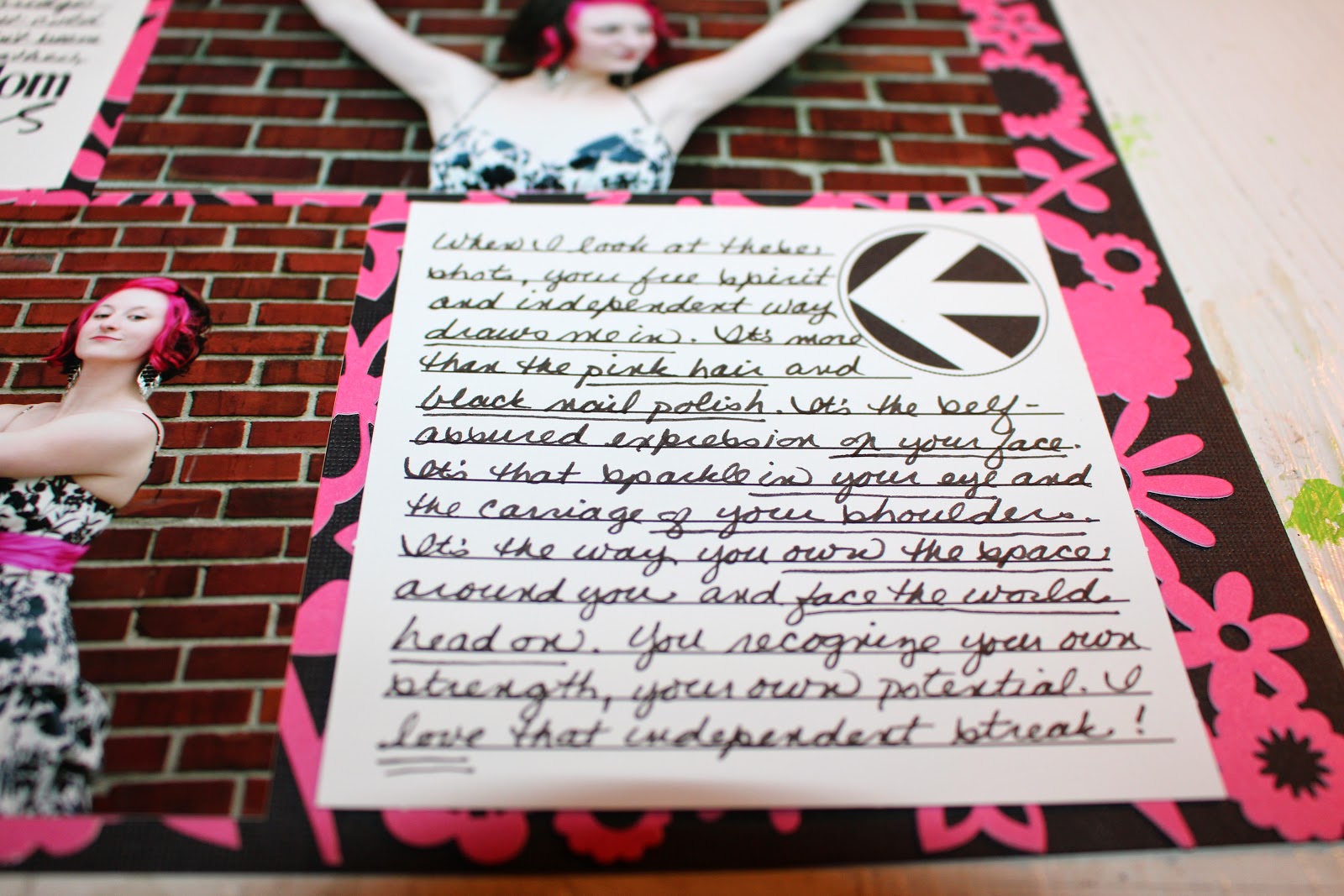 I was tempted to use a pink hi-liter to draw attention to some phrases in the journaling but decided that would be disruptive or harsh. With the bold colors, I felt like I already had a lot going on in this layout, so I stuck with underlining some phrases. While that might seem strange to some people, I think it goes along with the intensity of colors and the hand drawn feeling of the journaling spots. 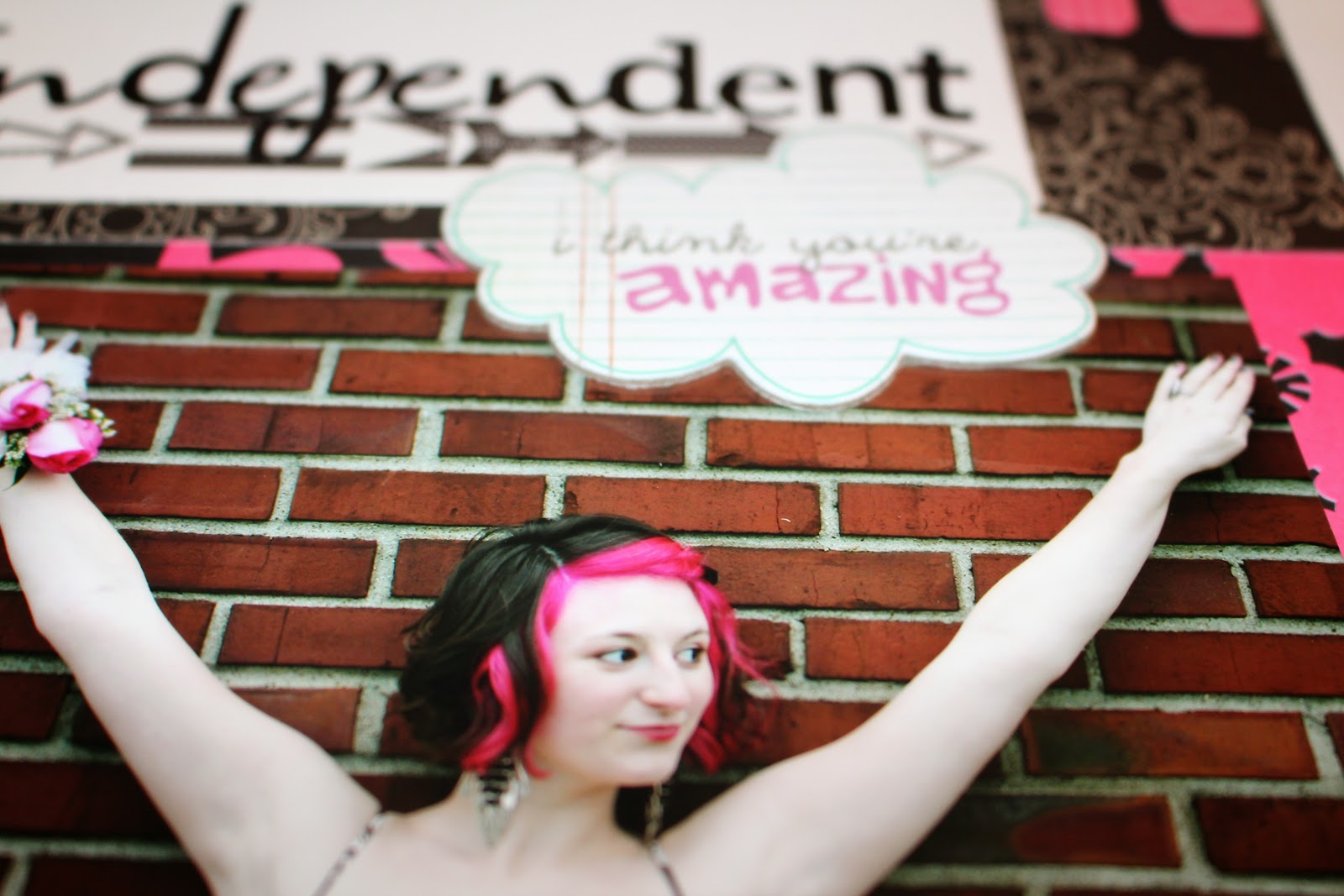 I felt like the title treatment needed the journaling spot & the printed paper to ground it and give it enough substance. The letter stickers are Making Memories glitter letters that have been out a few years at least.

Once I had the basics arranged, I looked for a few recent embellishments to make the layout feel more current. With just a few touches added with a label, a diecut printed chipboard shape, and some mini tags stapled on using my tiny attacher, I think I managed to infuse old product with new life.

Do you have old product that needs to be used? How about trying out a layout that uses some of the oldies but goodies? It felt amazing to use some product in my stash that I still loved in a way that feels fresh to me.  Go and be crafty, my friends!