Today, I'm sharing an old layout that I made about my brother, Brian,  and his wife, Beth. I made this layout around 2008, I think, and it isn't one that I love. Here, I thought I'd share with you what I don't especially like about this particular layout.

1) It's awfully plain. I mean, I'm a fan of white space, but there really isn't anything going on in a large chunk of this page.

2) I know that the landscape 8.5 X 11 style was kind of popular for a while, but it never really worked very well in my traditional albums. It just seems awkward to flip an album around to look at a landscape style page. 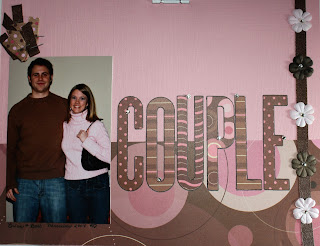 3) There's really no journaling on this layout at all. Why did I make it? I have no idea. Yes, I labelled who the people are under the photo, but that was all I had to say on the entire page. Maybe I just wanted to play with some pretty stuff. 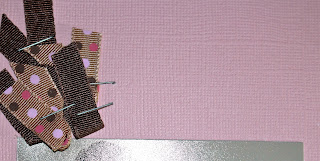 4) I really love ribbon - then and now. But I'm just not a fan of that cluster of ribbon pieces held in place by full-sized staples. It's not terrible or anything, but it's certainly not indicative of my style now. 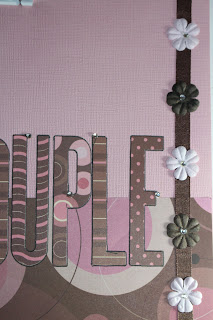 5) I do sort of like the strip of ribbon on the right hand side of the layout with the paper flowers, and I still like those crystals in the middle of the flowers too. I probably wouldn't use them today because I think it feels a bit dated, but I still like the products in my heart. Haha! 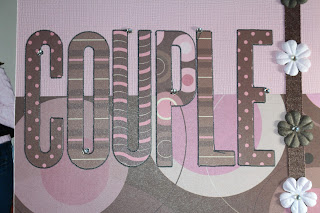 6) Man, that's a big title. I don't remember how I made it either. Were those punch out letters? Or maybe I used a stencil? Idk how I did it. It's hard to tell in the photo, but I used a black ink pen to trace around each letter for some reason. Maybe I thought that made them pop against the patterned paper at the bottom? That seems like a reasonable explanation.

So yeah, this is a layout I made that really doesn't tell a story. I didn't think I did that very often, but it looks like I did fall victim to that occasionally. I'm sure I enjoyed scrapbooking it, but, to me, this is really just a decorated photo album page. These days, I'm much more interested in making sure I tell some important stories as I scrapbook. That's a change that I'm proud to have made, and this layout is a good reminder of why that matters to me.