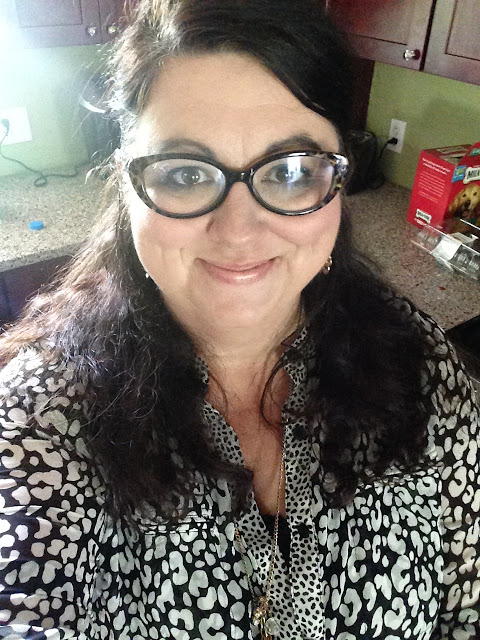 Quick selfie before heading out to my first ever political rally - only took me 44 years to make it to one. Regardless of your political affiliation, I encourage you to attend a political rally at some point in your life. I found it to be an exciting experience that really spoke to my sense of patriotism; it awoke in me more of a desire to be part of the political process and to have my voice heard. How amazing would it be if more people in the USA felt excited and honored to be part of the political process?!

The fella and I decided to go to the political rally on a bit of a whim. (His son decided to stay with the grandparents that evening, so we had a couple's evening all to ourselves. How did we decide to spend it? By attending a political rally held in our hometown.) It was freezing for KY in May (mid 50s), and we ended up being out there for about 5 hours, but it was totally worth it. (Boy, I was glad that I grabbed a sweater to take with me at the last minute!) The event was held outdoors at our restored L & N Train Depot; you can see the art deco building in the background here. As we walked from a downtown parking lot over to the train station, at least four different vehicles stopped to ask us what was happening and where we were going. I guess the fella and I look like safe people to approach at random - haha! 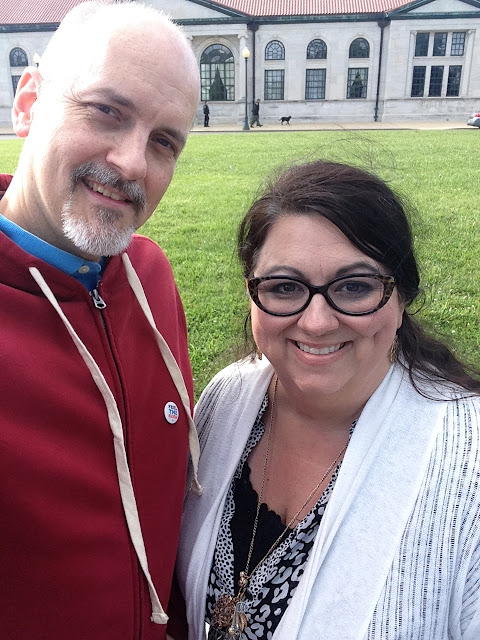 The security line was quite long, at least a few hundred people deep by the time we arrived, but it didn't take much time to finally make it to the xray machines. I'd left my purse in the car, so I cleared that part easily. I'm not sure if it my bra or the metal plate in my neck set off the sensors, but I was selected for 'wanding' by security agents. Deemed not a threat, we were able to enter the event without problem. Looking around, the demographic was quite young. The fella and I were some of the most mature people there. (I thought that would sound better than oldest, but it really doesn't...) Anyway, I expected it to be mostly made up of the under 40 set, and I was right. There were a few older people there, but we were certainly the minority.

We waited for a long time for the candidate to arrive; he was scheduled to arrive at 5:00 according to local media, but he didn't speak until about  7:00.  The people-watching in the interim was lots of fun.  I kept my eyes peeled for people I might know. Apparently, I mostly know Republicans, because there weren't many people I recognized. Haha! I did see a few people I know, though. For example, I learned totally by accident that a relative by marriage is now the chairperson of the Democratic party in our county. Who knew? I never even knew she was a Democrat before this event. Haha! (We try to avoid political discussions at family gatherings; it's safer that way.) It was pretty fun to run into her at random. 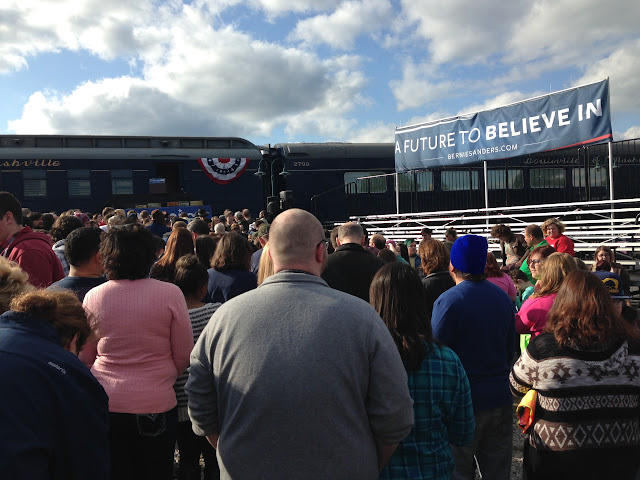 I thought it was cool that the podium was set up at a refurbished train car entrance/exit point and that the grandstand was located in front of the restored train as well. 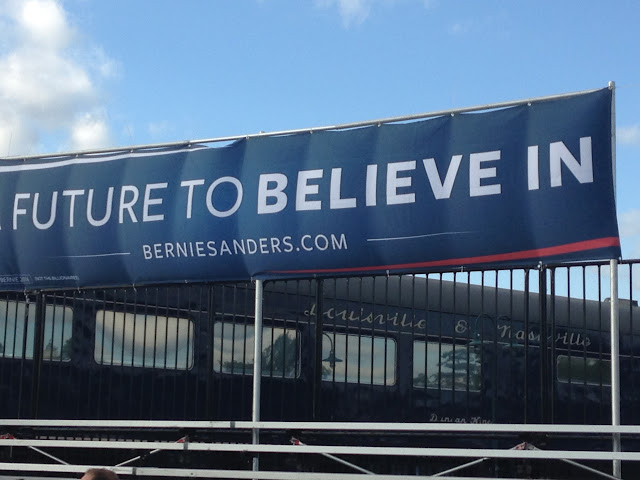 The fella patiently snapped more selfies at my request - I like the soft light/edges on this one even though it was totally accidental. Here's the close-up version.. 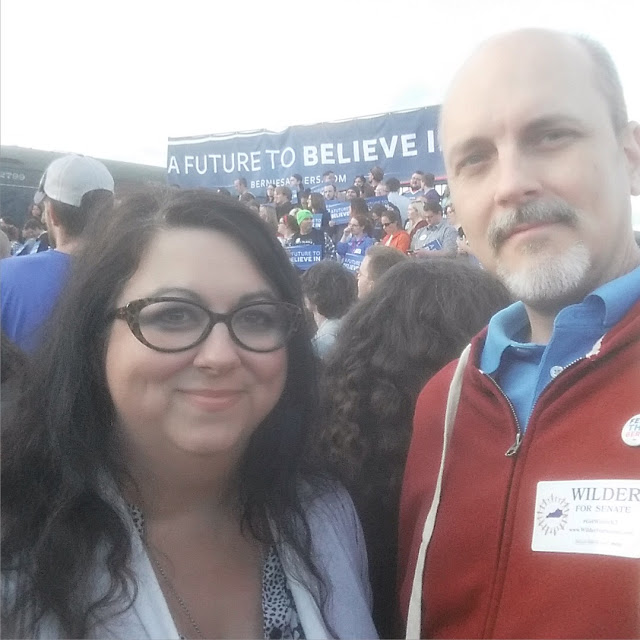 And the one from a bit more of a distance... If only I'd remembered to grab my selfie stick from my purse... 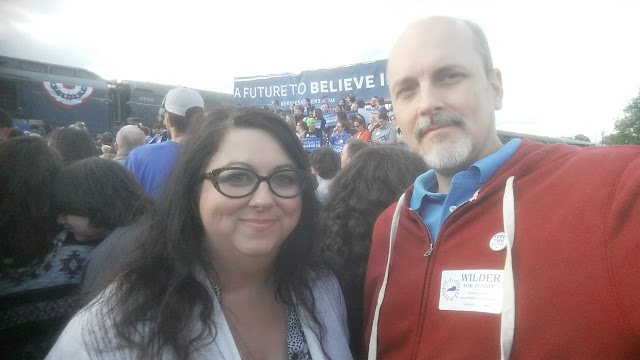 Here, you can see the grandstands filled with people holding signs. 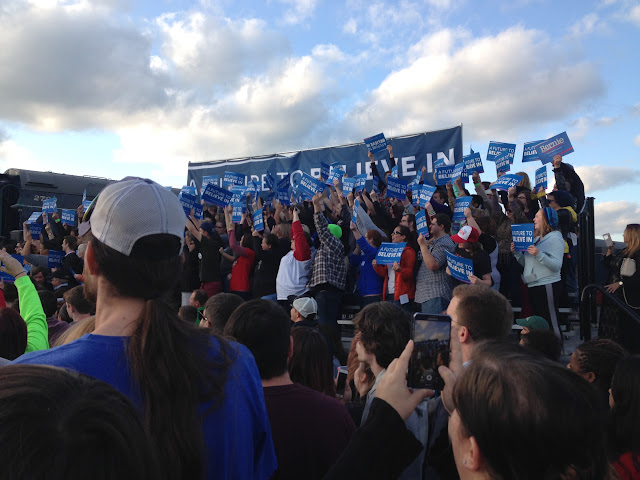 Before the candidate spoke, a campaign worker and a member of the executive board of our county's Democratic party spoke to us. 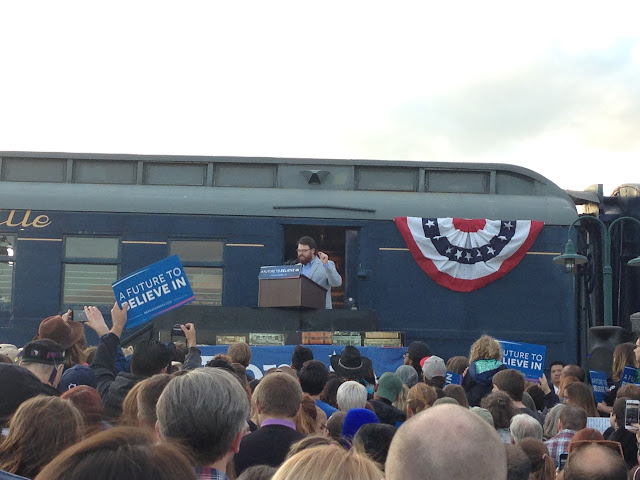 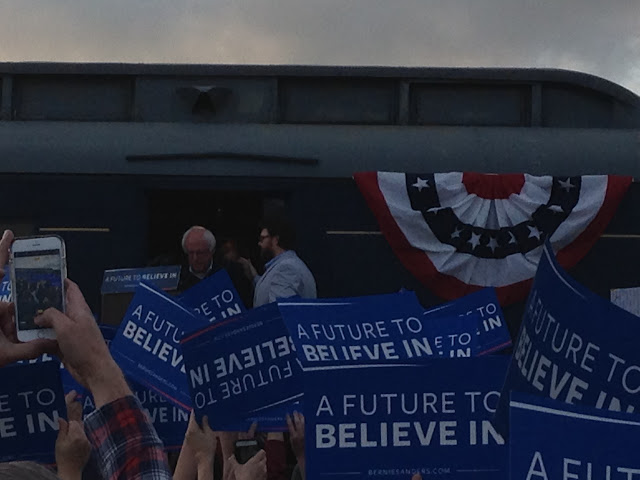 Bernie Sanders spoke to us for about an hour, and he was exactly the same persona in real life that I'd come to expect based on what I'd seen on television and read in the news. I found his speech to be well-written, direct, and moving. 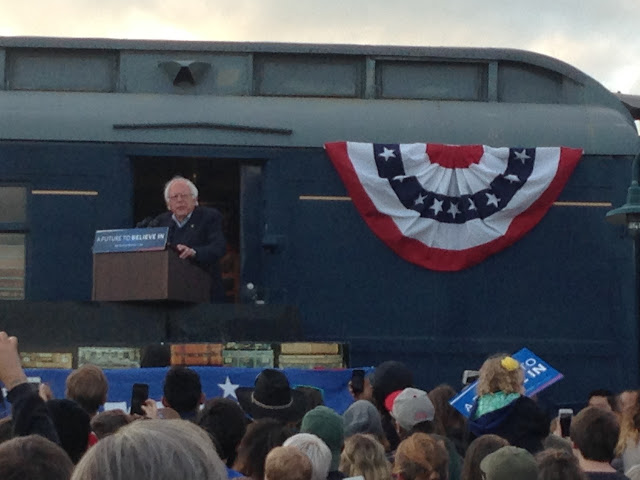 He spoke for at least an hour, and the crowd was extremely supportive. 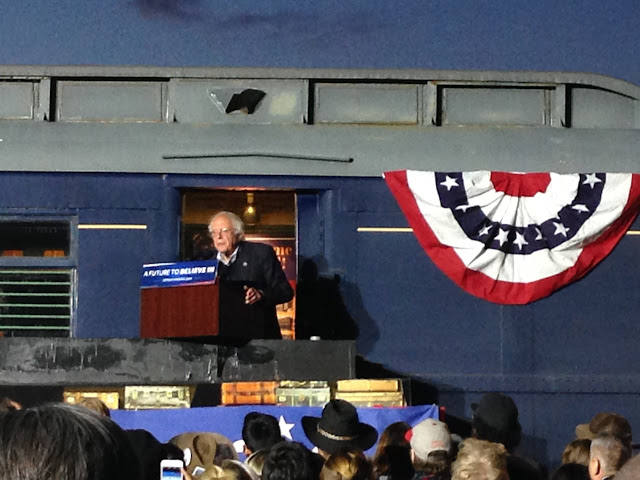 Our primary was held last week, and Hillary Clinton beat Bernie Sanders by less than 1/2 of 1% statewide, or about 2000 votes total. While the candidate I preferred didn't win the primary, I'm so glad that I was able to attend this rally and hear from him myself.
Posted by Tiffany Lowder at 12:00 AM

Email ThisBlogThis!Share to TwitterShare to FacebookShare to Pinterest
Labels: All about me, Photography, Wordless Wednesday