Some of you probably already know that I love a good crafty project, especially the multitude of them that I pin to my various boards on Pinterest. If you've been around my blog a while, you also know that my Pinterest attempts are often thwarted by things like - I don't know - reality. Anyone remember the painted canvas curtains fiasco? So....I thought I should surely try some more projects that could potentially either unleash my inner artist or, conversely, send me to the edge of insanity.

What better project to consider this time of year than one that would involve pumpkins? Now, I'm not really a fan of pumpkin anything. I don't eat or drink pumpkin products if I can help it; I don't even really like pumpkin pie unless it's slathered in whipped cream and/or ice cream. I don't really carve pumpkins because the guts feel weird on my hand and smell weird and the pumpkin kind of rots before it's actually Halloween. I probably have a few pumpkin decorations, but that would involve going out into the abyss of the bonus room (an area I haven't managed to corral properly just yet) and looking for them. I'd much rather spend $382 and 64 hours making my own pumpkin decor, hello?!

One of my friends recently pinned this pin on Pinterest. I followed the link through to the website and was impressed by the tutorial that made me believe that I, too, could paint a lovely pumpkin canvas. I want to make mine into a door hanging for my front door, but I'll do that only if the final product doesn't embarrass me. 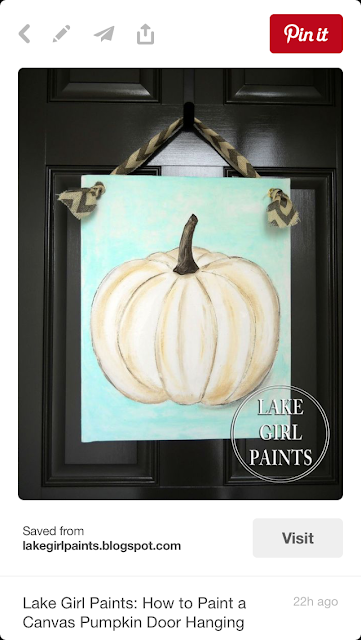 Here are some links to various blogs that I linked to from Pinterest in order to do this project:
http://lakegirlpaints.blogspot.com/2015/09/how-to-paint-canvas-pumpkin-door-hanging.html
http://www.sleepyheaddesignsstudio.com/2013/09/painting-pumpkins-on-canvas.html
https://www.etsy.com/listing/190228391/art-original-acrylic-two-pumpkins
http://www.jenniferrizzo.com/2013/09/you-can-paint-pumpkin-canvas-art-skills.html
If you like these links, you should prob follow my Craftiness board on Pinterest, just saying.

To prepare for this grand project, I headed to my local craft stores for supplies. I bought the canvas and paints at Michael's; canvas was 50% off or about $8 for a 20 X 24 piece and paints were 66 cents each - I bought 5 colors. Next, I stopped by Hobby Lobby to look for something else entirely and came upon a great deal on paintbrushes for mixed media. I snagged a package of 10 for $5.99; with my 40% off coupon, it was around $3.50 total for the package. Pin was pinned, canvas & paints &
brushes were purchased. All that was left to do was actually make the project.

After a pretty long day of work and night class, I settled into my studio to watch the democratic debate and sketch out my pumpkin. Here's what my initial sketch looked like. I didn't trace anything; I just referred to the pics and her instructions on her website, then I went for it.  I had thought to myself that tracing a pumpkin was an option if I couldn't just freehand it. If you're too nervous to freehand it, definitely just trace a pumpkin. Who cares if you use a pattern or stencil to get the exact pumpkin shape you want! 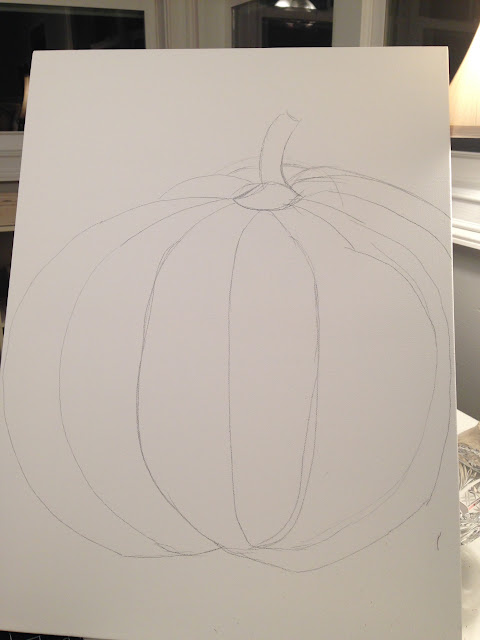 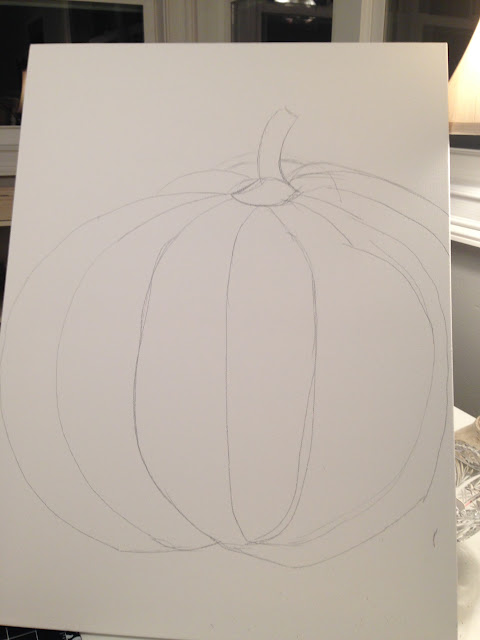 I learned something new; it's really difficult to erase pencil from a canvas. In fact, I didn't have much luck at all. When I do another project like this, I'll use a cheapie pencil and draw VERY lightly. Using my sketching pencils that are so dark was probably not a good idea in this case.

I didn't want my finished project to look too much like the original, so I started looking for ideas that would allow me to make it a little different. Ultimately, I decided I wanted two pumpkins on my canvas instead of just one. (I really wanted three, but I didn't think I could get everything to fit since I'd drawn the first pumpkin as such a fat one.) Take a look at the sketch that includes a small pumpkin in the foreground. 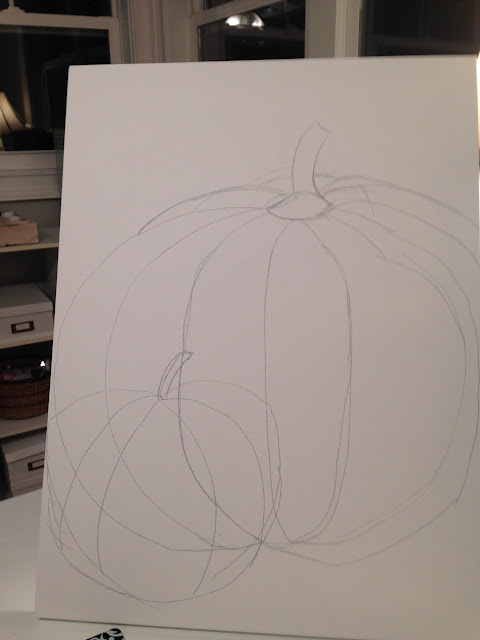 Here, you can see the paints and brushes I'm using for this project. 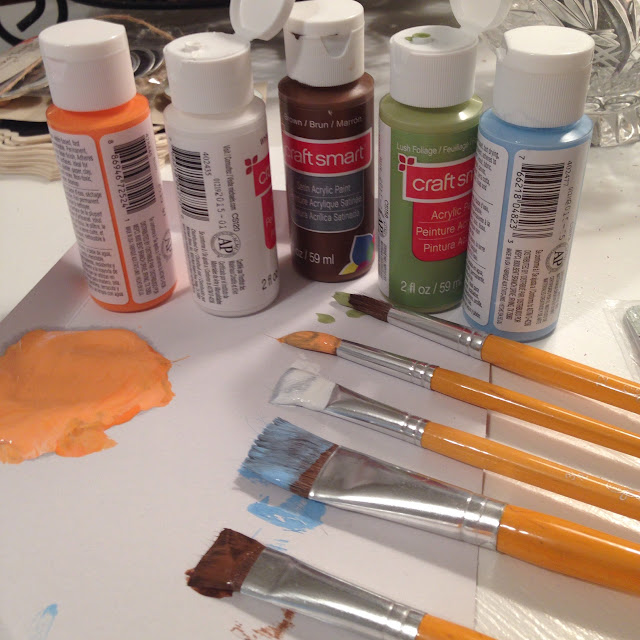 I tweaked my sketch a bit, especially the back side of the pumpkin that is partially visible behind the stem, but I finally had a sketch that I thought was workable. I began filling in my sky first. I remembered from my paint 'n sip class that you should always paint the "sky" part of your canvas in vertical strokes to lead the eye in the right direction and to provide depth to your painting, so that's what I did. I also remembered to wrap the paint around the sides of the canvas to make a more attractive finished product. Here, you can see the first coat of acrylic paint. I sort of wish I'd done a more turquoise colored sky that was super light; this one kind of looks like a cartoon sky. It's not a big deal, but it is something I'll be aware of next time I do this. 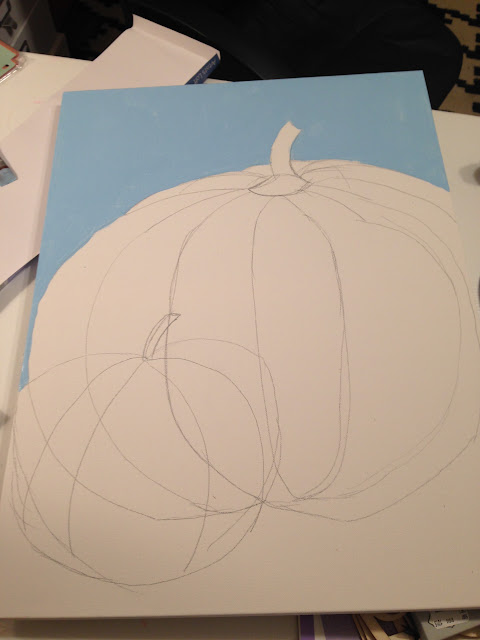 Next, I painted my table underneath the pumpkins.  I don't love this color brown either, It's too muddy for my taste; I'd rather have an espresso or cocoa color. I think I'll be able to live with it once I tweak it some on the next coat with some highlights and lowlights and stuff. Remembering my painting instructions from my recent Dabble experience with the fella, I painted the table with horizontal strokes to ground the painting and give the eye a "horizon line" on which to rest. Just like with the sky part, I wrapped my color around the edge of the canvas. 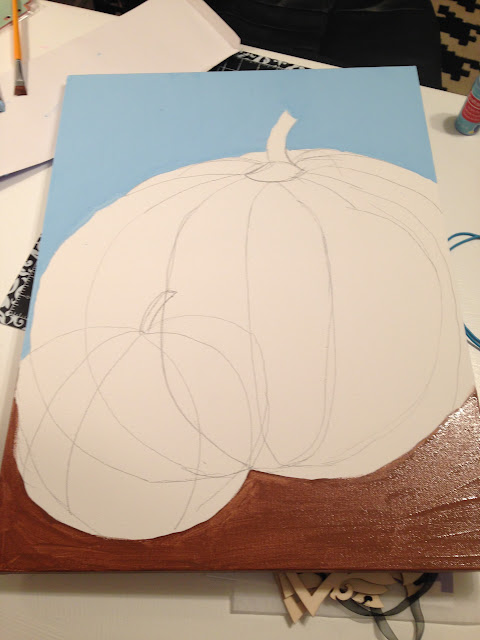 Next, I painted the large pumpkin white and the small pumpkin orange as well as the stems green. This pic shoes at least two coats on the white pumpkin and one on everything else. The white paint I used is a bit thinner than I like; next time, I'll try a different brand for the white. To make the pumpkins seem more realistic, I used brushstrokes that followed the "spine" lines of the pumpkin, basically big letter Cs or large parentheses shapes. Along the edges, I had to follow the outer curve of the pumpkin, but I think following the spine shapes on the inside of the pumpkin was a good choice. I did the same thing (albeit on a much smaller scale) with the shape of the stem. 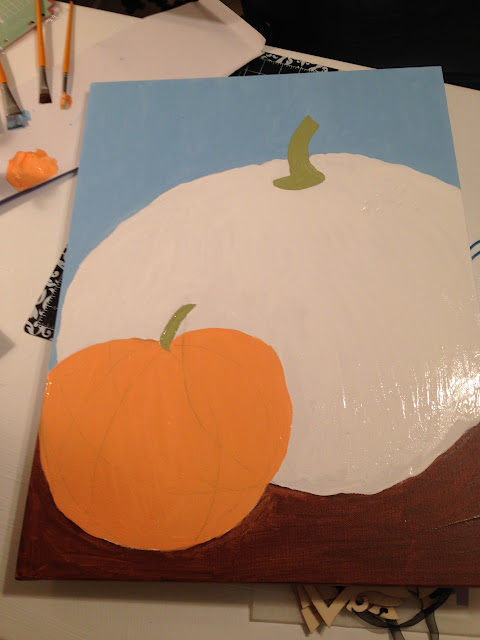 At that point, it was really my bedtime for work the next day, so I soaked my brushes and headed to bed. The coats of paint I had already applied were still not dry, so I knew I really couldn't keep working on it until it had. Right now, I'm wondering a few things -
- Will I still be able to see my pencil lines to create the pumpkin lines? yes, no problem there
- How will I cover said pencil lines if I can still see them? the darker color paint and blending fixed this no problem
- Should I try to put my initial or a phrase or a word on the large white pumpkin, especially knowing that I'm likely to majorly jack it up in some way? too afraid of jacking it up, so I opted not to try this
- If I love it, what will I make on the 12 X 24 canvas I also bought? A scarecrow? A pumpkin topiary? A shock of corn? A snowman? I'm excited about the possibilities, but I guess I need to finish this one first. idk what I'll make yet, but I guarantee I'll be making more of these

I have plans with the fella this evening, but I plan to head home after school and a meeting to work on my pumpkins a bit more. Take a look at what I manged to accomplish is just about an hour of work between my plans on Wednesday afternoon.

I mixed up some light brown paint for my shadowing... 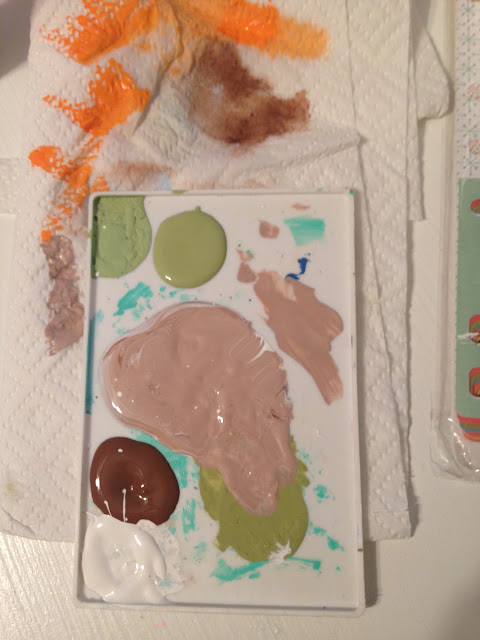 I blended some brown and white to create a light brown and painted spines on my pumpkin. Honestly, I wasn't very pleased with the way this looked at first. The lines were a bit too heavy and a bit darker than I wanted. I didn't freak out or anything, but I knew I'd have to continue working with them somehow. 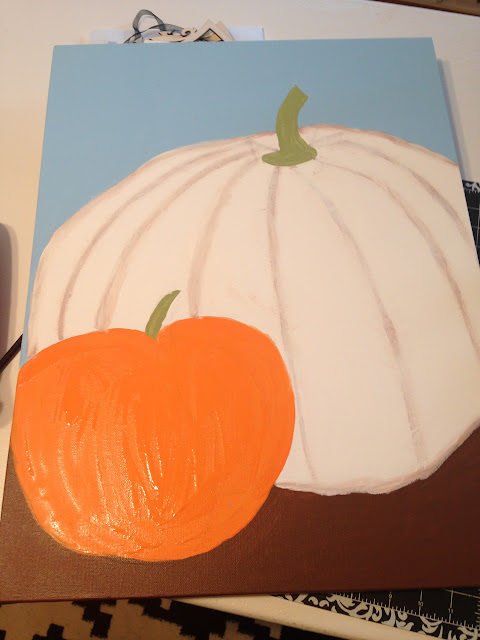 I repeated that process with the same color and the same brush on the orange pumpkin as well. Essentially, I followed the original pencil lines I had made for the outline and spines of the pumpkin. Since you could still sort of see them through the base coat, I thought that worked out quite well. I sort of wish I'd used a smaller round brush; this one gave lines that were really thicker than I wanted initially. I flattened out those heavy lines by taking a dry flat brush and working the paint out of such a harsh, heavy pattern. Since the paint was still damp in lots of places, I was also able to take either orange or white to soften the edges of the spines. I kept working with it and blending the colors until it looked/felt more like what I had envisioned. 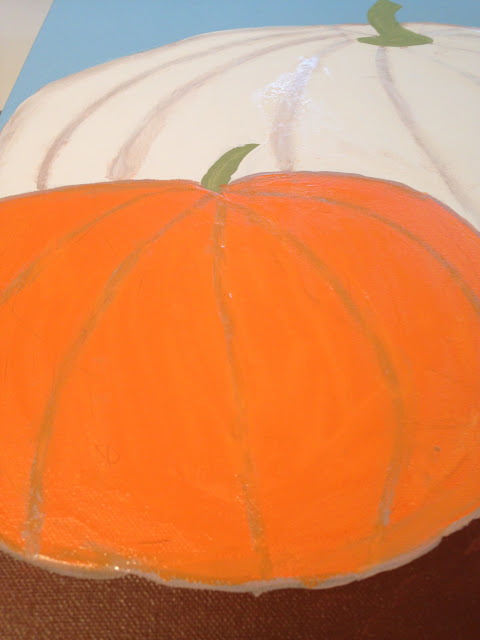 I looked at some pictures of handpainted pumpkins online and decided I wanted to add some curly things coming off of the stem. Here's how I started that process. I also toned down the bright green stems with some brown and khaki to muddy it up a bit and make it look more aged. 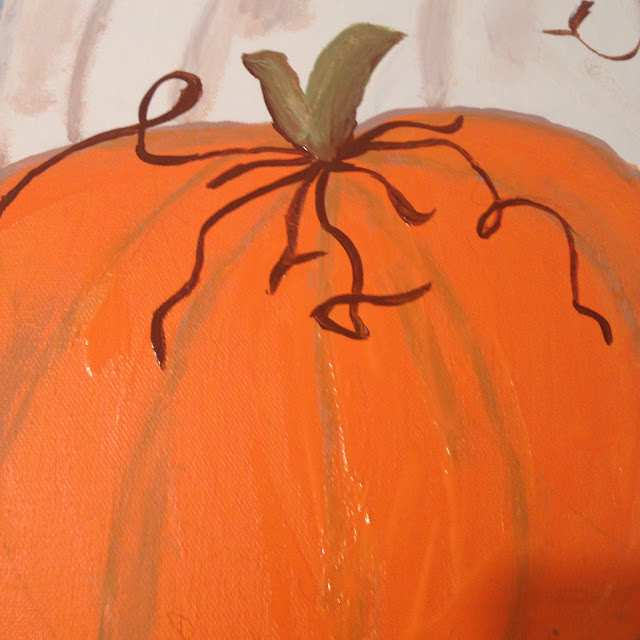 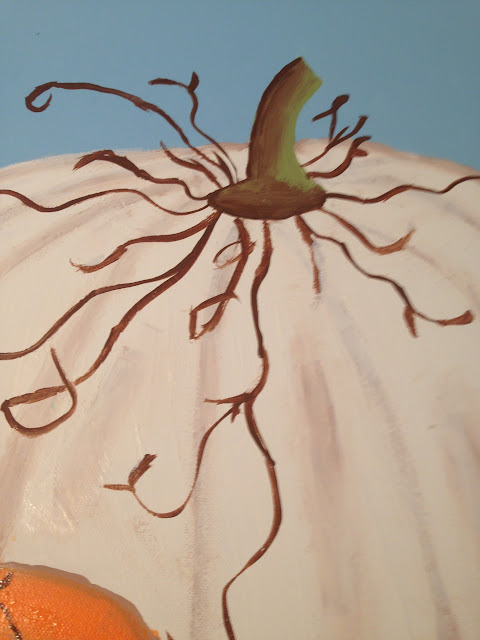 You can see in this picture than I did go back and add some more shadowing with the khaki paint I'd mixed up myself. Once I'd brushed it on rather lightly, I went back with my dry brush and worked those areas more softly into the canvas. I like how rustic these shadows makes the pumpkins look. I used the same process on both the orange and the white pumpkin. 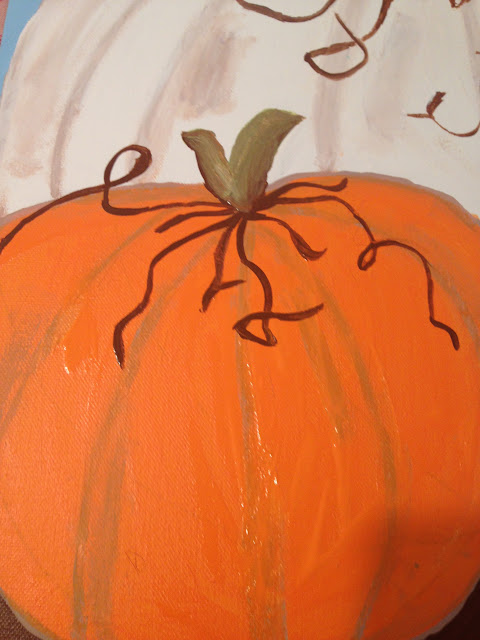 And here's how I left my painting as of Wednesday evening. My plan for Thursday is to come home and touch up any iffy areas as well as create a hanger for the decoration with a wide, fall themed ribbon. Hopefully, I can mount it on my front door no later than Friday morning. 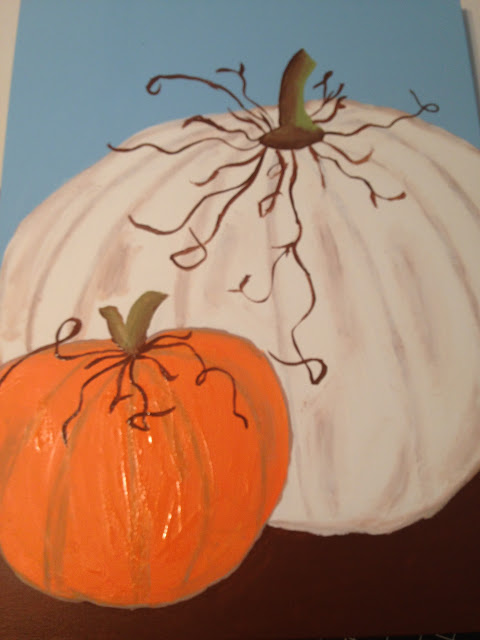 In all, this project cost me about $15. I spent a total of about 4 hours working on it, not counting drying time. I'm actually really proud of the finished project and hope some of you will consider making your own seasonal door hanging. Check out my finished door hanging:

Here it is from a distance with the sunlight shining on it Thursday afternoon. (And yes, those are all the leaves that fell in the last 24 hours on my front step. Oy!) 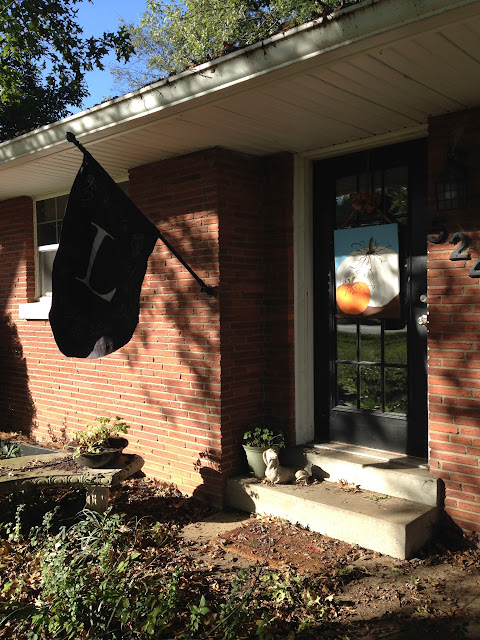 And here's my view from the inside of my house looking out my front door. I think it's cool how the design bleeds through to the back with the light shining on it - an unintended bonus. 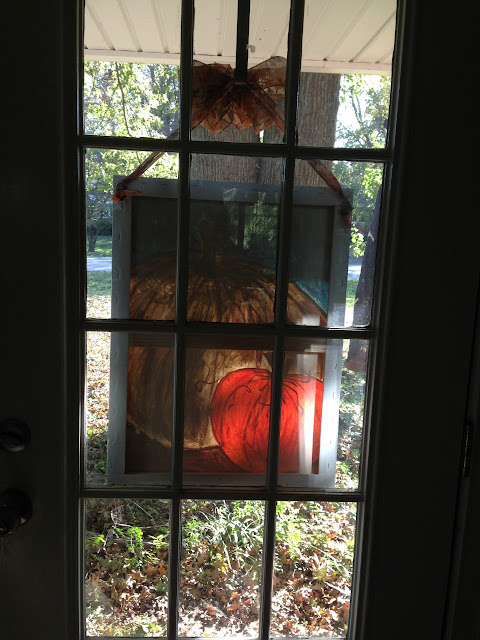 Finally, here's the closeup photo of my canvas on my front door. I'm loving it and am super proud of myself; look at me making a Pinterest project that wasn't a nightmare failure. Woot! Woot! I cannot wait to work on another canvas - check me out being all crafty and messy. These are better photos that I took before leaving for school this morning. 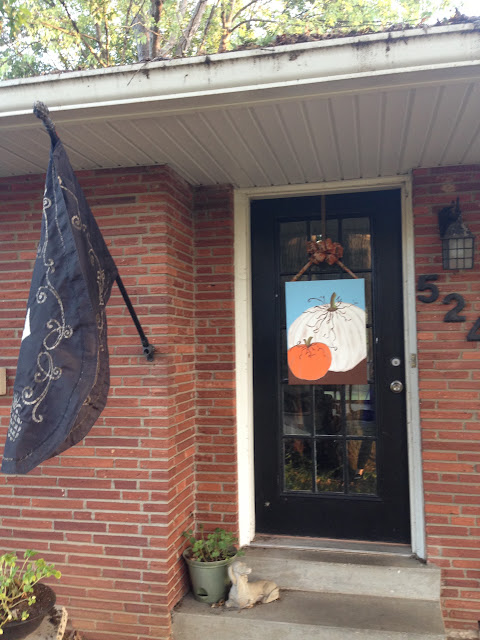 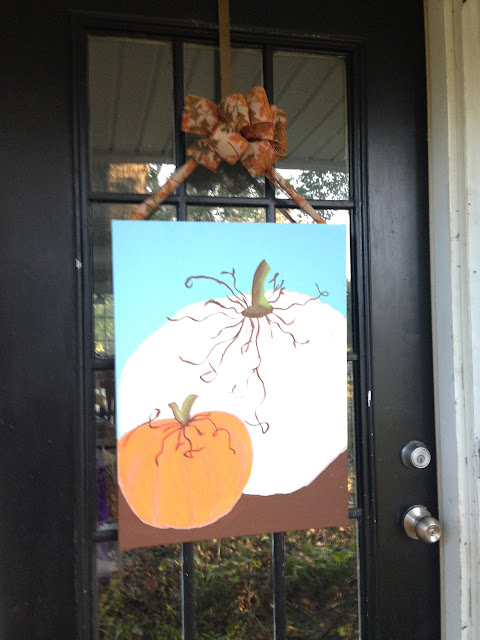 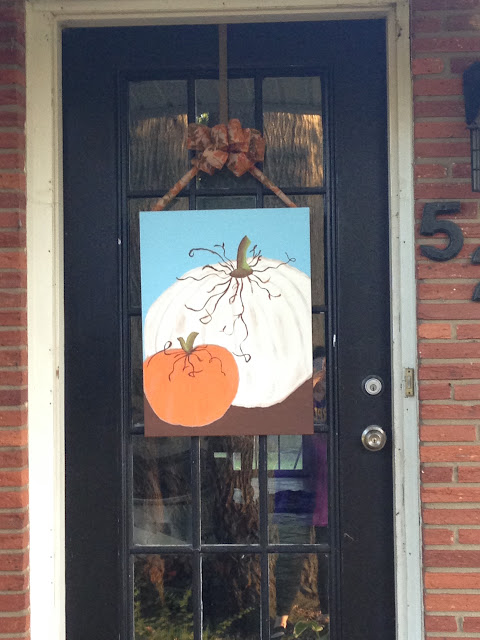 Ultimate takeaway from this crafty experience? If I can do it, anybody can. I promise you. Now, go and be crafty, my friends. :)
Posted by Tiffany Lowder at 12:00 AM