I mentioned before that I want to start using this blog space to record some of my childhood memories that I may not have scrapbooked about up to this point. In this way, my blog becomes a journal of sorts that I can reference when I'm ready to make the actual layout.  Like the last memory I shared about Weebles, I don't have any photos of this memory. I will do some searching for photos from that year and for photos of the pony from another time period though. The point is that I'm not going to let a lack of photos prevent me from telling a story that is important to me. This story is all from my memory of that day. Only my aunt and uncle are still living from that side of my family, and I haven't asked them for any details. Instead, I prefer to look back on the day through the lens of my own memory, even if it could be a bit flawed after so many years.

Every little girl wants a pony, and this girl was no exception. My Pops called me his little cowgirl, and I regularly sported cowboy boots and a cowboy hat with my school dresses. My mother probably hated this fashion trend I started for myself, but she never told me as much. Christmas 1976 or 1977, when I was 5 or 6 years old, my grandparents had a huge surprise for me. We had all gathered at Mama and Papa's house (my great-grandparents) for our family Christmas celebration like we always did. My mom and I arrived first, so I busied myself playing with Papa in the living room while the grownups did whatever they did to get the holiday meal ready. My aunt and uncle arrived, then my other aunt arrived too. Only my grandparents were missing. In retrospect, I probably should've thought that was strange since they usually arrived everywhere early. But it was Christmas, and I was a little kid hyped up on presents and sugar.

Oblivious to what was going on outside, I was surprised when Pops and Grandmother arrived and called out from the back door for me to come help them with the presents. I was excited to help and was already planning on carrying my OWN presents inside first. Everybody else's presents would just have to wait. (I was considerate at 5, you know? Haha- not.) There, in Papa's driveway on Detour Road were my grandparents and their light blue El Camino truck. I didn't really care about that, though, because Pops was holding the bridle of the most adorable black and white Shetland pony. I stopped dead in my tracks, mesmerized by the horse and still not sure what it all meant. Pops held out his hand with the lead dangling from it. "Here," he said, "come meet your new pony. Merry Christmas, sunshine."

Like any other kid would've done at that point, I squealed in delight, but I took my time approaching the pony. She shifted on her feet in nervousness, and I reached out my hand tentatively. Pops murmured to her, and she stood patiently as I approached. I noticed she wasn't even as tall as Pops, but compared to me, she felt huge.  I reached out and touched her velvety looking ears that twitched as she took in the situation. She nuzzled my arm, then her broad, pink tongue snaked out to lick my hand. I laughed delightedly and grew braver. Seeing that I couldn't reach her well, Pops swooped me into his arms so I could stroke the space between her eyes. She had the longest eyelashes I'd ever seen, and I could tell something was wrong with one of her eyes. When I asked Pops about it, he told me that she was blind in one eye and was going to be destroyed. When he saw her at the stockyard, he knew he had to save her and give her to me as a present. "Every cowgirl needs her own pony," he explained. Pops asked me what I wanted to name her, and I immediately chose the name Lynn. Maybe it was because of my Aunt Lynn or that my middle name is Lynn; I honestly don't remember. Looking back, it seems an odd name for a pony. 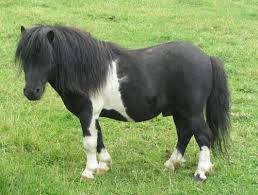 While this isn't a photo of my actual pony, this one is pretty close to the way mine looked.

Pops set me on her back - no need for a saddle to ride the gentle Lynn - and immediately began leading her around the yard. Lynn was a docile, sweet creature who allowed me to sit on her back for hours at a time. We spent quite a bit of time in the backyard at Papa's house that Christmas day, so I could ride Lynn over and over again. When I wasn't riding her, I fed her apples and carrots and took her to the trailer attached to the truck to munch on some hay. I was immediately smitten and worried that Lynn would miss me terribly since she couldn't sleep in  my room with me at night. My mother was horrified at the idea, but Pops assured me that my Grandmother's horses, Lucky (an ancient Shetland pony who drank coca-cola from glass bottles and had a nasty habit of biting anyone he didn't like, including me) and Honeybee (a beautiful Palomino who was never broken to saddle but could run like the wind) would keep Lynn company in the barn. He was right, of course, and Lynn settled nicely into her new home.

We'd ride around the house, even in the front yard. We'd set off at a stately pace toward the pond until we were out of sight of the house, then Lynn would break into a dead run as I bounced along, laughing the whole way. Once, she was spooked by a snake and ran us both straight into the fence behind the workshop. I got thrown but wasn't hurt; Lynn had a few cuts and bruises too but recovered well. She and I were pretty tight from the time I got her until I was around 12 or so. As she got older, she spent more time just shuffling around the pasture around the barn, but I always looked at her fondly.

I don't remember when Lynn died, but I'm pretty sure I was a teenager by that point. Even with her one blind eye, she was able to enjoy a long and peaceful life on our little farm. When my mother and I moved out to the farm with Pops after my grandmother died, I was able to see Lynn often. By that point, junior high, I wasn't really that interested in playing with her though. My time of being a cowgirl had come to an end, especially since I'd figured out that I didn't really like getting dirty or hanging out with stinky animals or wearing hats. Haha! I do know how incredibly lucky I was to be a little girl who grew up with a sweet pony to ride, a doting family, and the chance to be a real, live, cowgirl.
Posted by Tiffany Lowder at 12:00 AM

Email ThisBlogThis!Share to TwitterShare to FacebookShare to Pinterest
Labels: All about me, Family life, Pets, Throwback Thursday, Writing