I'm happy to report that I survived the camping weekend extravaganza. I even enjoyed myself! Here are a few pics and some details about the weekend festival I enjoyed. 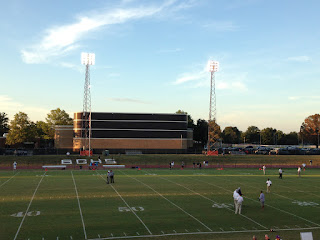 Before we went to the festival, we attended a football game at my school as they took on their cross-town rivals. Because the halftime score was 25-0, we decided to head on our to the festival at that point. The event was held on a farm about 20 minutes from where I live at the north edge of the county. I'd never been out to the actual property thought I'd driven past it innumerable times in my life. Parking was pretty well-organized, and we caravaned out there in order to know where the tent was and to be able to park together. Kelsey and Jake followed me, and I followed the fella. 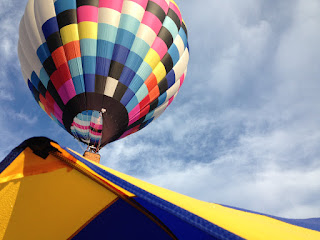 The fella had the tent all set up on Friday afternoon, so we were able to head right to the festival after halftime of the football game. (I had to support my Purples before I could enjoy the festival.) We listened to several bands and kind of wandered around checking everything out, but the evening was pretty low-key. I was exhausted from the week before at work, so I was pretty quiet that night. We headed to bed about midnight, I think, and I fell asleep immediately. The fella had trouble sleeping and couldn't quite get comfortable on the ground in the tent with all the noise going on around us. ;)

On Saturday morning, we awoke to the sounds of a hot air balloon directly over our tent. It actually landed just a few yards away from us. I was able to snap a few cool pics of the balloon, thankfully. Part of me would love to take a ride in a hot air balloon, but a larger part thinks it would be ridiculously scary. For now, I'll just enjoy the view from the ground, thank you very much. 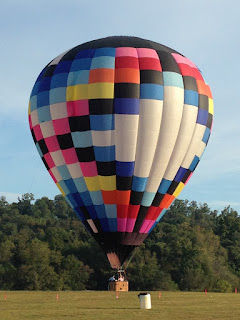 The fella is a good camping companion. First, he did all the heavy work and setup and lifting and stuff. Second, he worried about keeping me happy while we were camping. That's a win-win combination, folks. After rising early (like around 7), we headed home in order to shower and change. The fella knew I couldn't handle being dirty for 40+ hours straight. The bands weren't scheduled to begin again until 12:30, so we were able to take our time. I had planned on taking a nap at home, but I didn't have time for that. When we returned to the campsite about 11, we hung out and talked and read and just relaxed in the gorgeous weather. 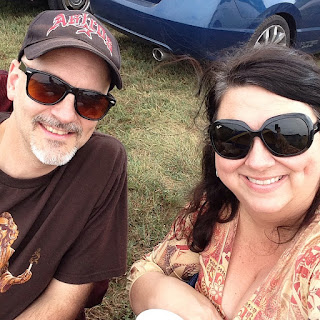 Here's a pic of our tent. It kept us nice and dry and was pretty comfortable thanks to the fella bringing like 5 comforters, and 2 sleeping bags, and several lighter covers too. I brought my favorite two pillows, so I was fairly comfortable. Friday night, we were pretty cold, but we made up for that on Saturday night with extra blankets.  I woke up on Saturday morning with a wicked sore throat, but I assumed it was just being out in the night air (didn't your mom/grandma used to say that?) or maybe an allergy thing. I expected it to get better throughout the day, but it really didn't. At least it didn't dampen my enjoyment of the festival. 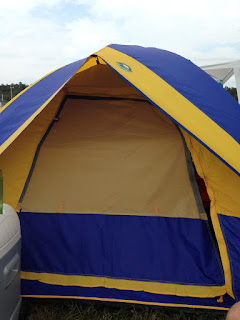 Here's a pic of one of the bands we listened to over the course of the weekend. I don't remember who it was - sorry. I didn't like a lot of the music to be honest. Most of it was just okay to me. If I'd loved the music, I probably would have thought the weekend was even more fun. For me, the truly entertaining parts were the people watching and just being able to hang out with the fella without television or the kiddo competing for our attention. We were both pretty relaxed about the whole experience. For whatever reason, I was so sleepy during the day Saturday that I could hardly hold my eyes open at points. We even took a short nap in our tent on Saturday afternoon, but I struggled the whole day. In retrospect, I think I was probably getting sick at that point and didn't realize it. 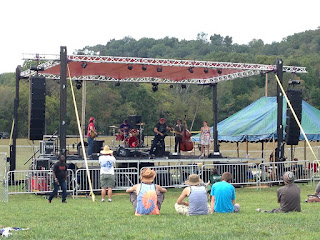 I'd bought groceries for us before the festival, so we had sandwiches on Friday night and Saturday at lunchtime. They did have food vendors, so the fella treated us to food truck food on Saturday night. I opted for a local Japanese restaurant's fare while he went with the classic barbecue sandwich plate. Neither of us really had much to drink; I had an apple ale on Saturday, and he had a beer. It was already so mellow without alcohol that we didn't really need it. Plus, it was less of a party atmosphere and more of a chill vibe all around. Some of our tent neighbors got super drunk and argued and broke up and threw up, etc. I'm not sure if it was all one group or there were several groups sharing in these events. It's hard to tell the direction of the voices from inside a tent. Anyway, all of that was entertaining in its own way too, but I was really glad that wasn't me. I guess I'm truly past the uber partying age these days; mellow is my happy place. 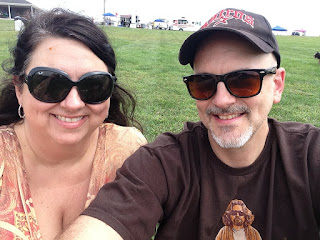 As a wise man should, the fella posed willingly for multiple selfies and even managed to smile in a couple of them. It's so hard to get men to smile in photos, isn't it? Anyway, I was pleased our dimples were showing for both of us in this photo. 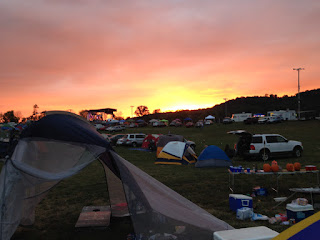 These pictures absolutely do not do the sunset justice on Saturday night, but I tried to capture it anyway. Plus, it gives you a good look at the scene of all the people camping. 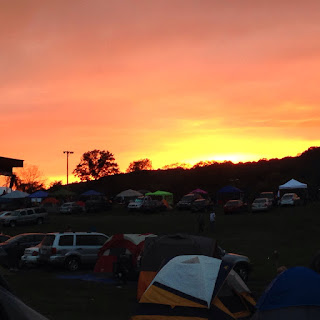 Check out one of the music stages on Saturday night. I think I snapped this while Government Cheese was performing. (They were probably the most widely known band that played the festival.) It was so cold Saturday night that I wrapped myself up in a blanket while listening to the various bands play. We made it to the last show, Canago, at 1 a.m. Sunday morning, but I called it a night when I caught the fella's teeth chattering. He wasn't getting my blanket, so I insisted we head on back to the tent to get warm and go to bed. 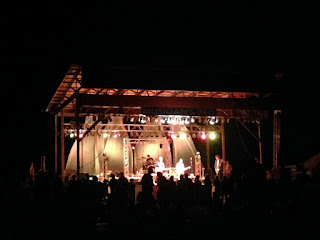 Sunday morning, we left the campsite about 8:30 and were home soon afterward. I must admit that I did take a nap at that point with the pups. They'd missed me, and I was feeling pretty drained. Again, I didn't realize I was actually getting sick, so that probably had a lot to do with my lack of stamina over the weekend. I hope the fella didn't think I was a total wuss who was no fun. I was just battling feeling at half-speed and didn't know why.

Pros of the experience: great weather during the day, not terribly crowded, a wide variety of music and people at the event, fella with great camping gear, no reason to hurry, plenty of time to talk and relax, didn't run into anyone we knew except Kelsey and Jake

Cons of the experience: porta potties - I'm scarred for life, enough said; the building with restrooms was a 3-4 minute hike away from our tent; the nights were a bit on the chilly side; I ended up being sick although I probably caught a bug at school last week, and the weekend just exacerbated it;  I didn't really like the music.

As of Monday morning, my sore throat had not improved, and my chest was feeling pretty tight. I've started an antibiotic, but I don't think it's really doing its job. My cough is worse (barky and deep like the croup or bronchitis) + I had lots of body aches yesterday. If I don't improve by tomorrow, I'll probably have to go get a shot to kick this thing. While I love fall in Kentucky, the quick change in seasons is often enough to send me into some sort of respiratory infection. Ick!

The takeaway: I'd def go camping again with the fella as long as there are actual restrooms, and I have a chance to bathe once a day. That's not too much to ask for, right?
Posted by Tiffany Lowder at 12:00 AM