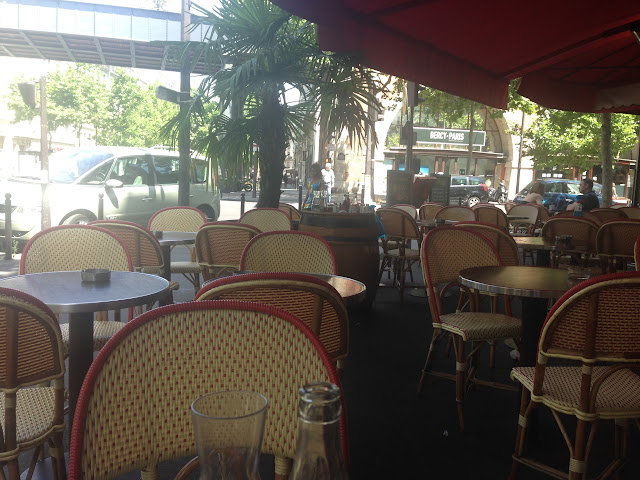 The way I see it, there's a huge difference between being alone and being lonely. Interestingly enough, I really didn't feel lonely during my 6 week solo trip to Paris. It was something I really worried about ahead of time, but it was thankfully not a problem. I think it helped that I could text and facetime/skype with my loved ones while I was away, but I also think it has to do with expectations. I knew I was taking this trip alone, so I expected to spend a lot of time alone. For me, loneliness is much more likely to strike when my expectations are highly different from reality.  Here are a few of my other observations about being alone versus being lonely...

Eating alone is uncomfortable at first, but no one bats an eye about solo diners in big cities. I ate almost every meal alone other than the week Tonia spent with me and the couple of meals I shared with Caroline and Madeleine in Paris and Steffanie in Amboise. I promise no one else cares that you're dining alone; if nothing else, it might even add to your aura of mystery. One thing I struggled with was not rushing while I ate alone. The French eat leisurely, so wolfing down my food would've been rude and set me apart as an outsider. I also noticed that the French don't really play on their phones at the table; they're much more likely to read a book (not a tablet/device) or to write in some type of journal. I think their favorite is probably people-watching - mine too.

Navigating the city is much easier to do alone. When I got lost, I didn't feel guilty that I took someone else the wrong way. If I needed to run to catch a train, I could. There was always space for just one more person wherever I went; sometimes there wasn't room for more. Train tickets and shuttle tickets and everything else were all simpler when I only had to worry about getting myself there in one piece and on time. At the same time, it can be intimidating to wonder if you're on the right train for a particular destination and have no one to ask for confirmation or reassurance. When all the announcements are in another language, well, you just have to hope that you read the signs/boards correctly beforehand. Thankfully, I didn't end up in the wrong city by accident. :)

Strangers are friendlier to and intrigued by a solo female traveler. They wanted to know my story and felt comfortable striking up convvos with me. Virtually everywhere I went, I had great conversations with the most random people - the couple retired from the Navy in Bayeux, the Australian couple in the Loire Valley, the grocer around the corner, the waiter in front of Notre Dame, the bookseller at Shakespeare and Company, the dapper older gentleman in the Tuilerie gardens, the famous magician I met at a local bar, the scarf saleswoman at the market, the Irish linen salesman at another market, my landlord's assistant, the gardener in Bayeux, the American and Russian girls at a cafe, the British and Australian college students in front of Notre Dame, the photographer at Giverny, the waitress at a neighborhood cafe, the groundskeeper in Vernon, the retired American couple on the train, the retired military contractor from NC at the airport, the gentleman who helped me with my suitcase on the return flight, the American medical student on the shuttle from Giverny,  the dreadlocked and pierced waiter at my corner cafe, the wine seller, my landlord. I'm sure there are more, but those are the ones that come to mind first. It was great to get to talk with them and share traveling stories, especially since other people's stories are fascinating to me. This was one of my favorite aspects of the trip, and I'm sure it helped me to not feel lonely.

One caveat to being alone in a big city is that you begin to close yourself off from others more, almost instinctively.  My friendly, wide smile and open eye contact weren't good choices in Paris. My friend Travis is fond of saying that I sparkle when I laugh and talk with someone. Well, I had to turn the sparkle down a bit while traveling alone.  As Tonia can attest, being too friendly garnered a surprising amount of male attention that was neither subtle nor invited. As a result, you begin to avoid eye contact with strangers; you smell with a bit of a smirk  instead of a toothy, open grin; you avoid touching others in conversation lest it be misconstrued as flirtation; you carefully guard your belongings in public; you approached every interaction in a quieter, more self-conscious way. At least those things were true for me.  I'm happy to report that I think I'm back to my more open self here in the U.S - once on American soil, I immediately felt more comfortable being my friendlier self, especially since I was traveling through the South on my way home.

Interestingly enough, I've actually experienced more loneliness since I've been back home than I did while I was away. That may sound a bit crazy, but I think it has to do with knowing that "my" people are here, but I might not be seeing them on a given day. I also think it has to do with being more plugged in constantly - checking email and texts and social media pretty constantly because I'm not limited on my data plan here at home. That sense of being plugged in but still being alone all day can kind of mess with your head. Of course, I'm also not distracted by seeing beautiful architecture and visiting amazing museums and pretty much just falling in love with the city around me. Perhaps this is just part of readjusting to regular life instead of a lengthy vacation; maybe it's part of leaving Europe behind and returning to the U.S.; maybe it is the funk of the end of summer or loneliness; and maybe it's just part of the natural cycle of things. Whatever the case, I can confidently say that traveling alone isn't the terribly lonely experience I worried about so much. If you ever have the chance to do it yourself, I highly recommend giving it a go.

Email ThisBlogThis!Share to TwitterShare to FacebookShare to Pinterest
Labels: All about me, keeping it real, Paris, Travel