Sharing a layout - using my Cameo 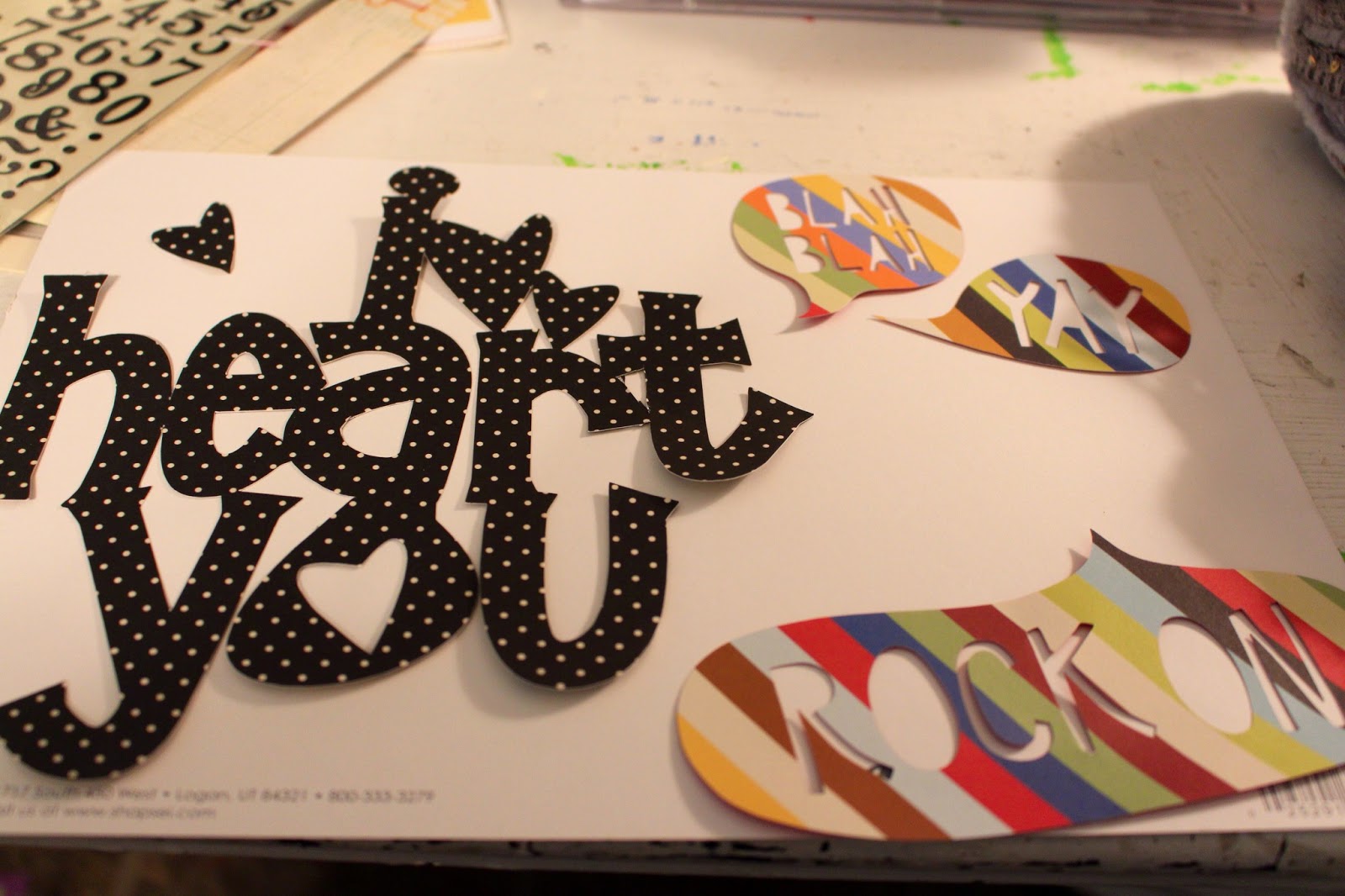 In this week's podcast, Tracie challenged me to use my Silhouette Cameo. I've had it for more than a year and used it like twice. I know, utter fail.  Anyway, I opened up my software, chose some random paper, and cut out a few things. Yeah, most people would start with a project in mind, but I just wanted to play. 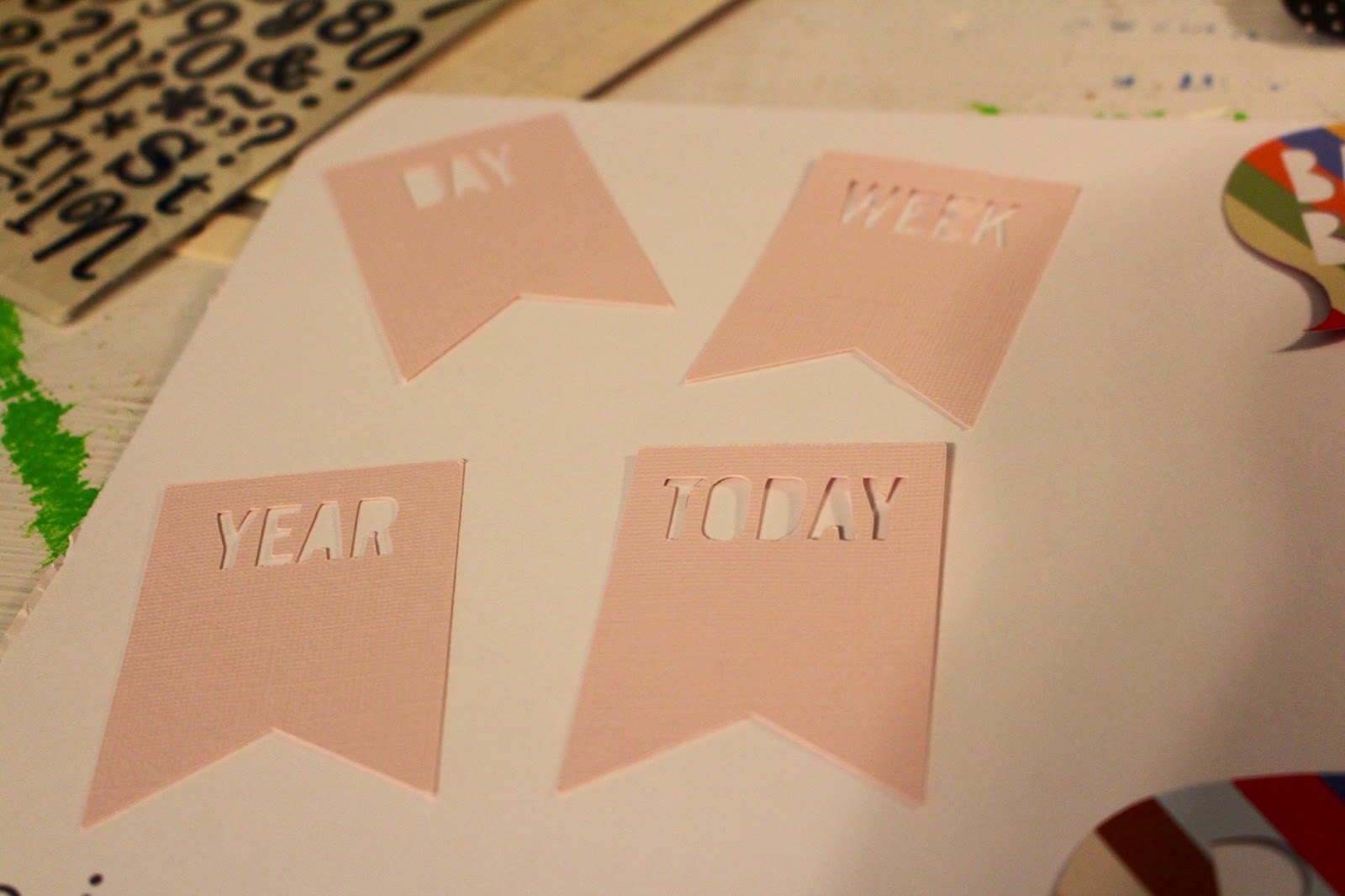 Most of my cuts turned out pretty well, but there were a couple of words that didn't cut exactly right. I'm sure that's user error, and I hope my skills will improve as I use it more. (Whew, my desk is a mess! I need to clean instead of scrapbook, but I'm trying to strike while the iron is hot.) 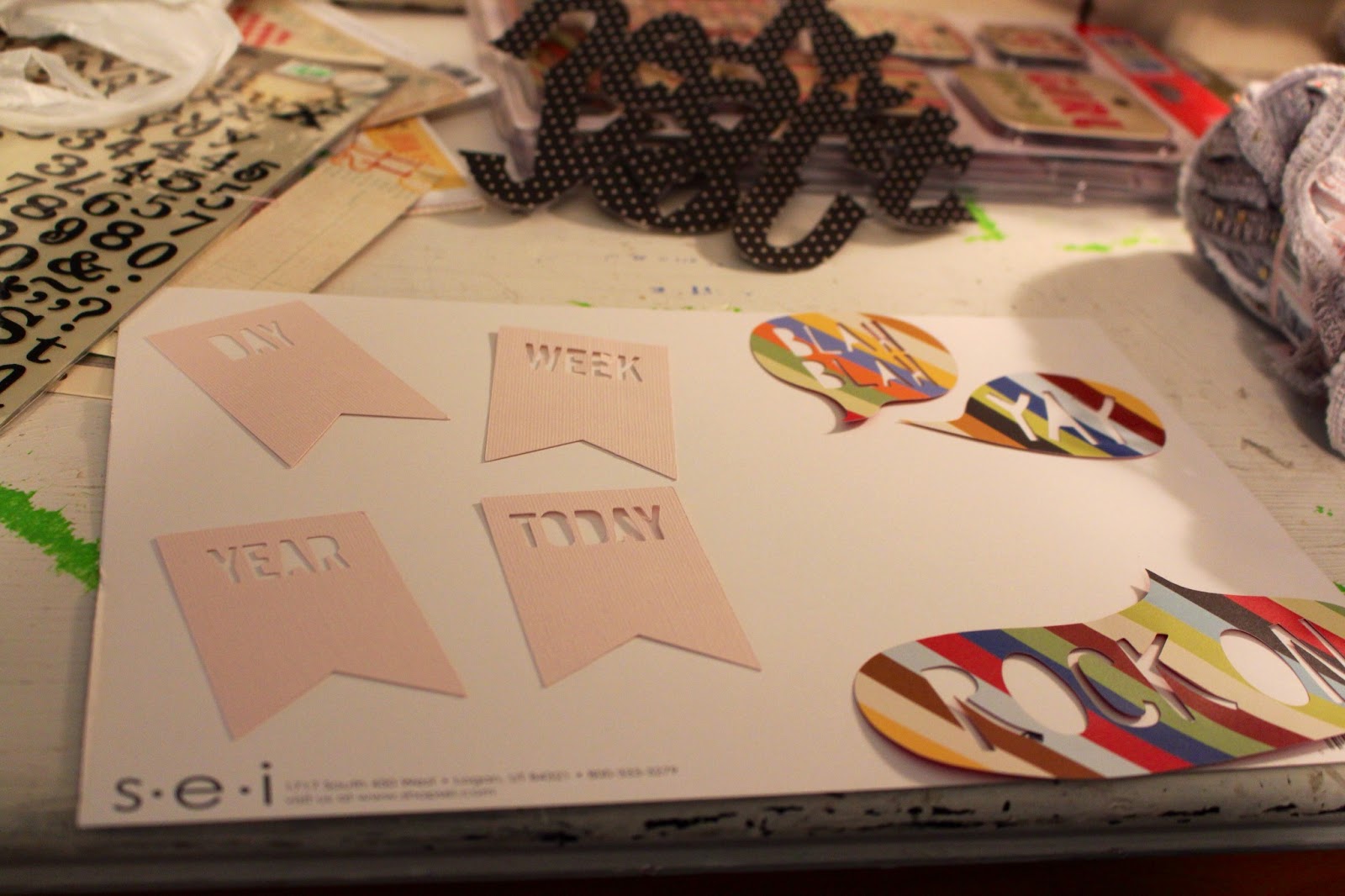 I just wanted to have a variety of things cut so I could then move forward with a layout.

As I sorted through my pics, I found this one of me from the first day of school this year. I'm really into yellow right now, so the graphic yellow and black print of my dress inspired me to work with that pic. Plus, I don't do a great job of scrapbooking about my work life, so I thought it would be a good idea to remedy that. 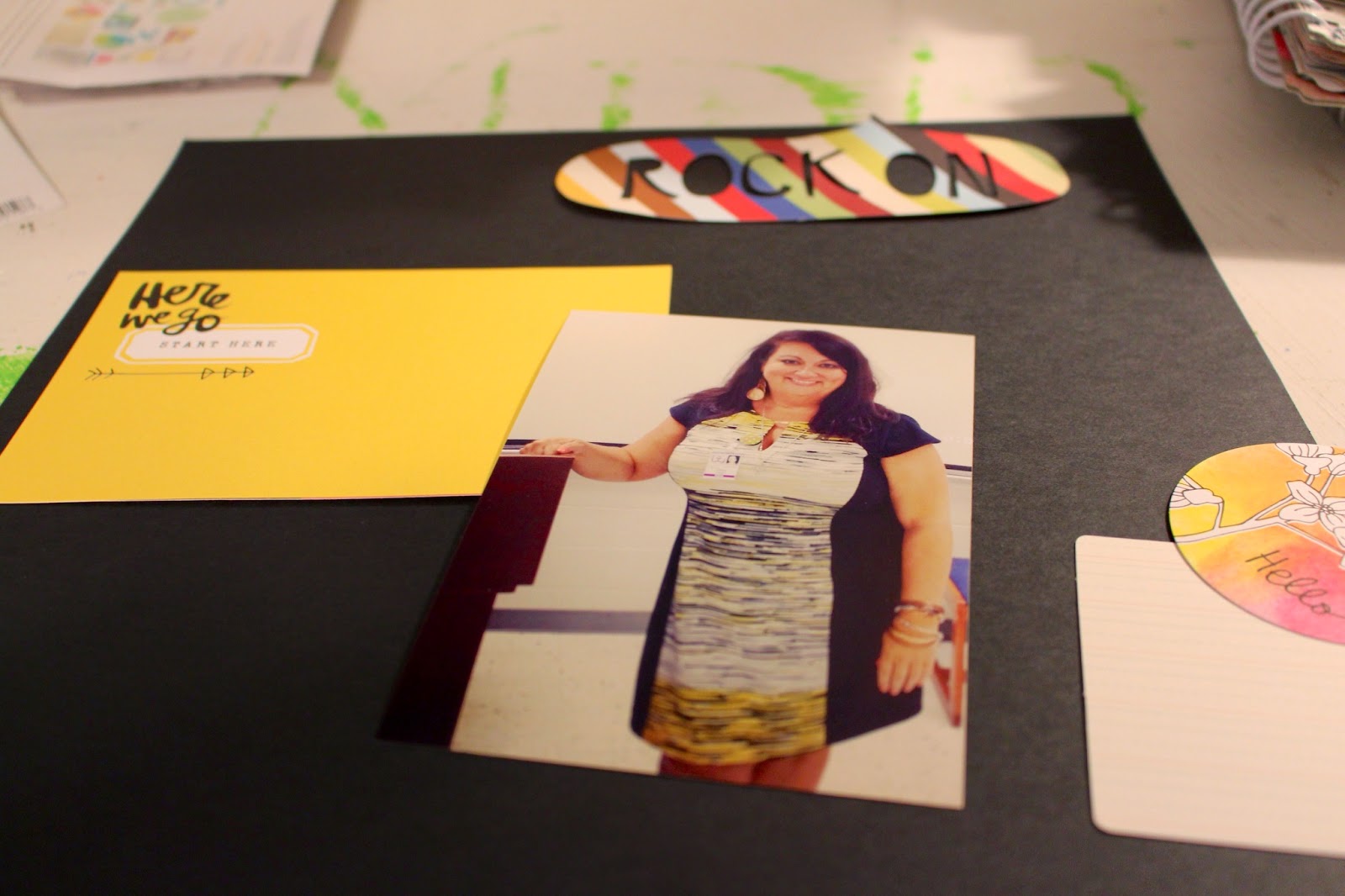 I started with black cardstock and a 4 X 6 PL style card in yellow and black. I knew I wanted to use those for sure.  Then, I began layering possible journaling blocks and embellishments.  I tried a couple of different cameo cut options, but ultimately decided on the day and year flags. 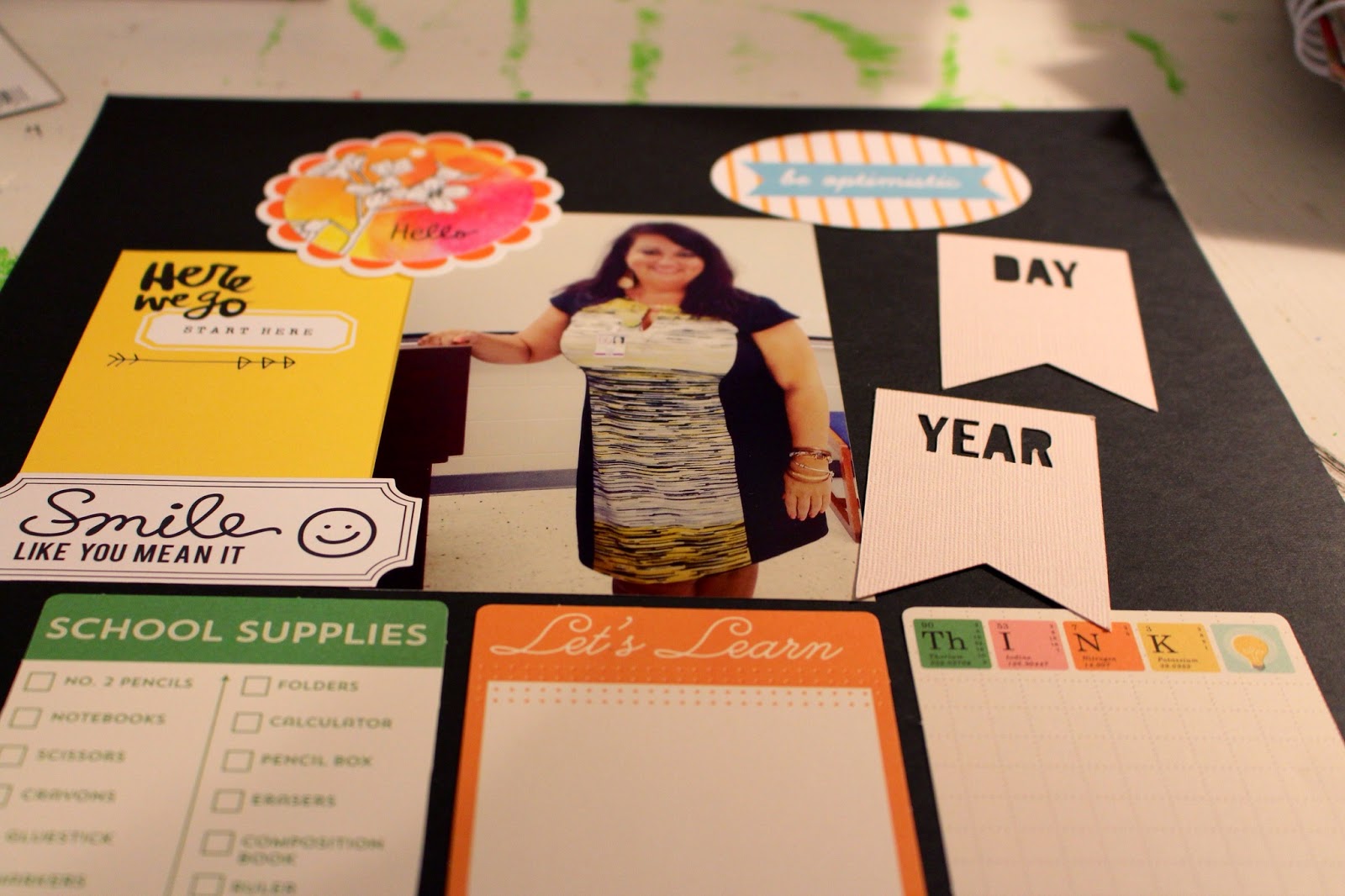 I wanted to incorporate several colors in the layout as accents, and I think this OA 'think' card accomplishes that for me. It allowed me to use the pink flags, the orange tag, and the multi-colored arrow and apple accents without it looking accidental. 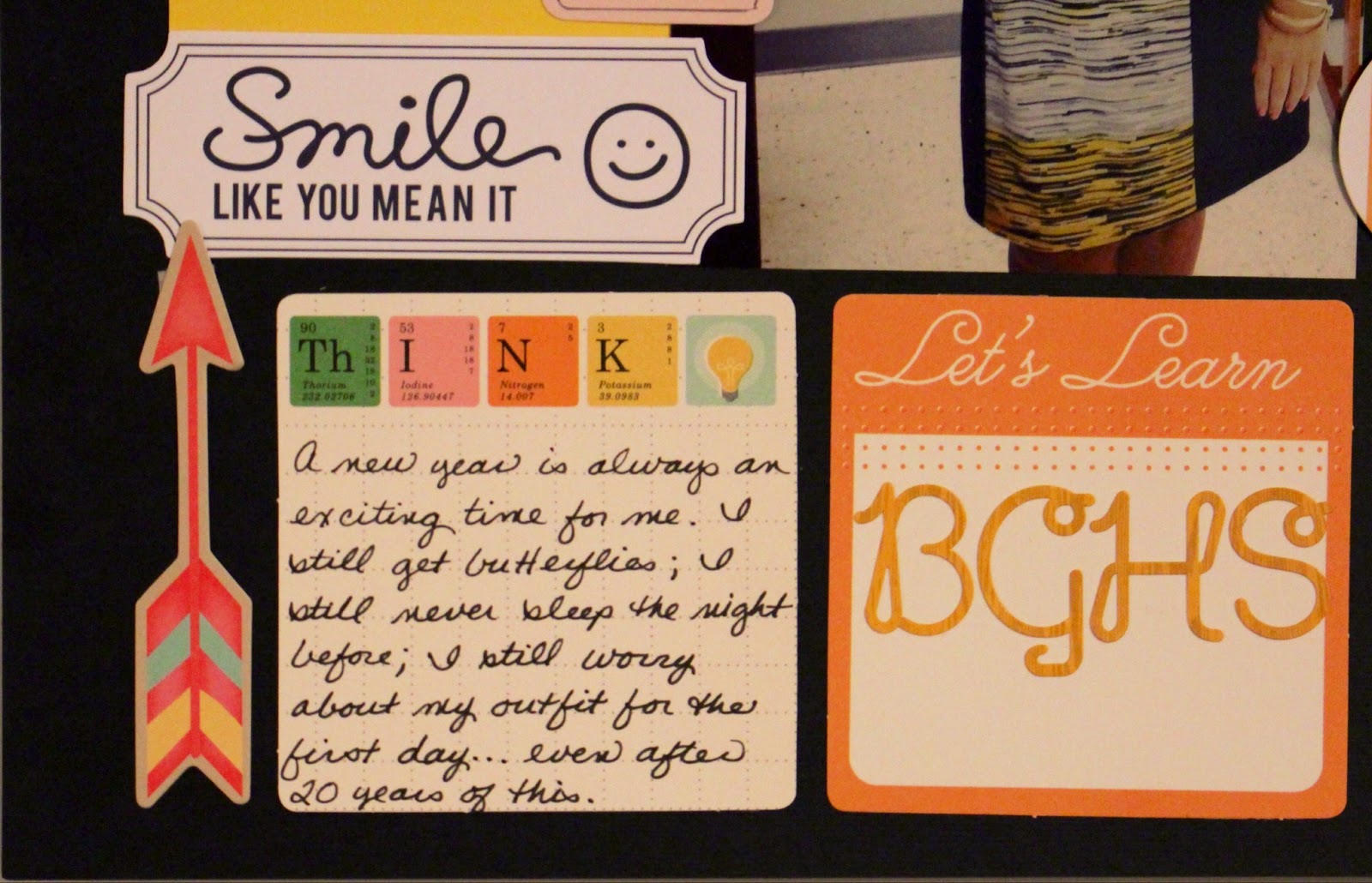 I had more to say about this pic than I anticipated, so I used another OA journal card to do that. I didn't care for the memo title at the top of the card, so I layered the multicolored diecut piece on top of it. I think the layering makes things feel more unified on the layout. I also like the repetition of journaling on the left and right hand side of the layout for the same reason. 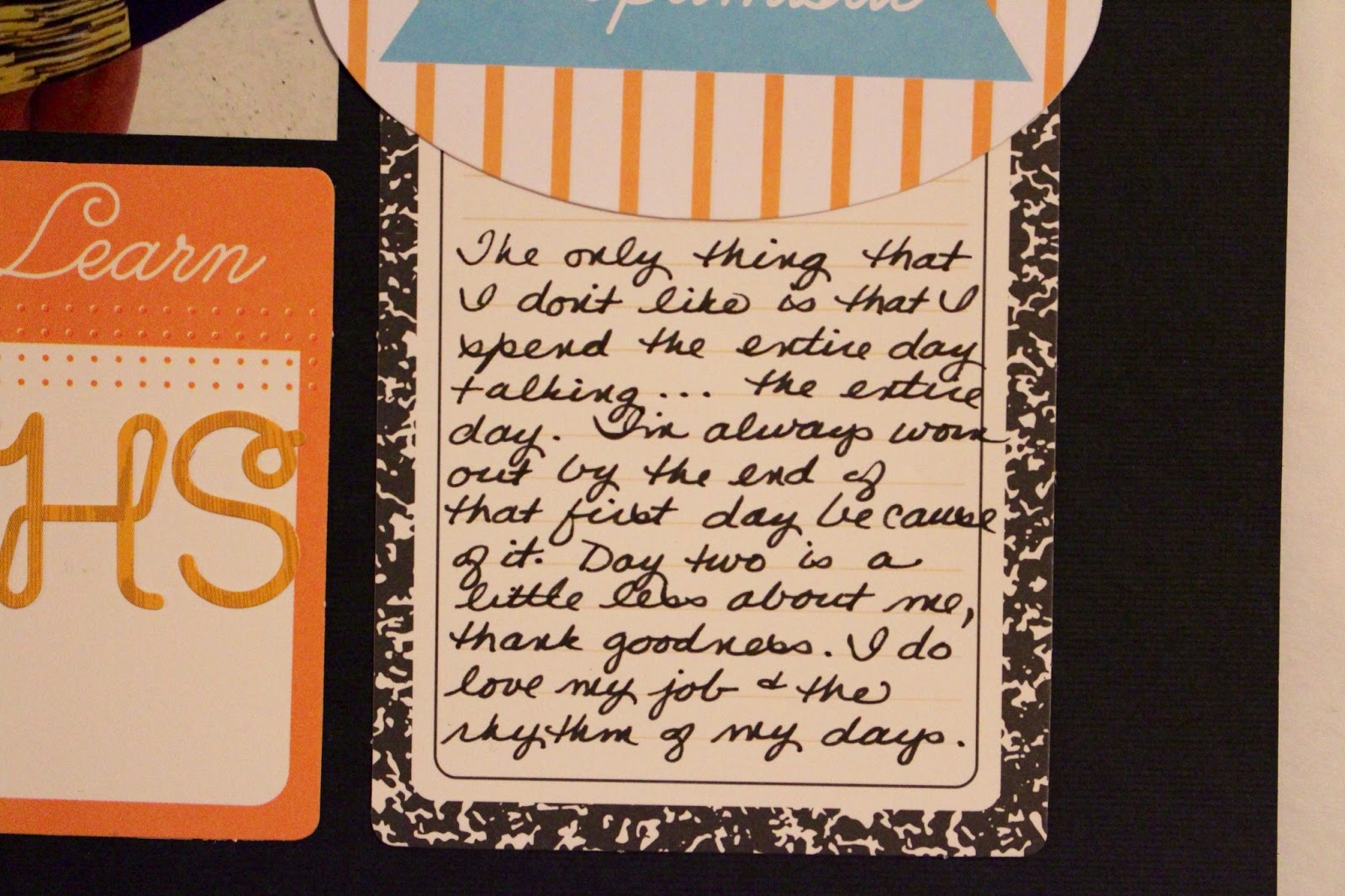 I included the initials of my school under my photo as a subtitle of sorts. I used a golden woodgrain sticker to pick up the yellow of my dress, but for some reason it looks orange in the pic. 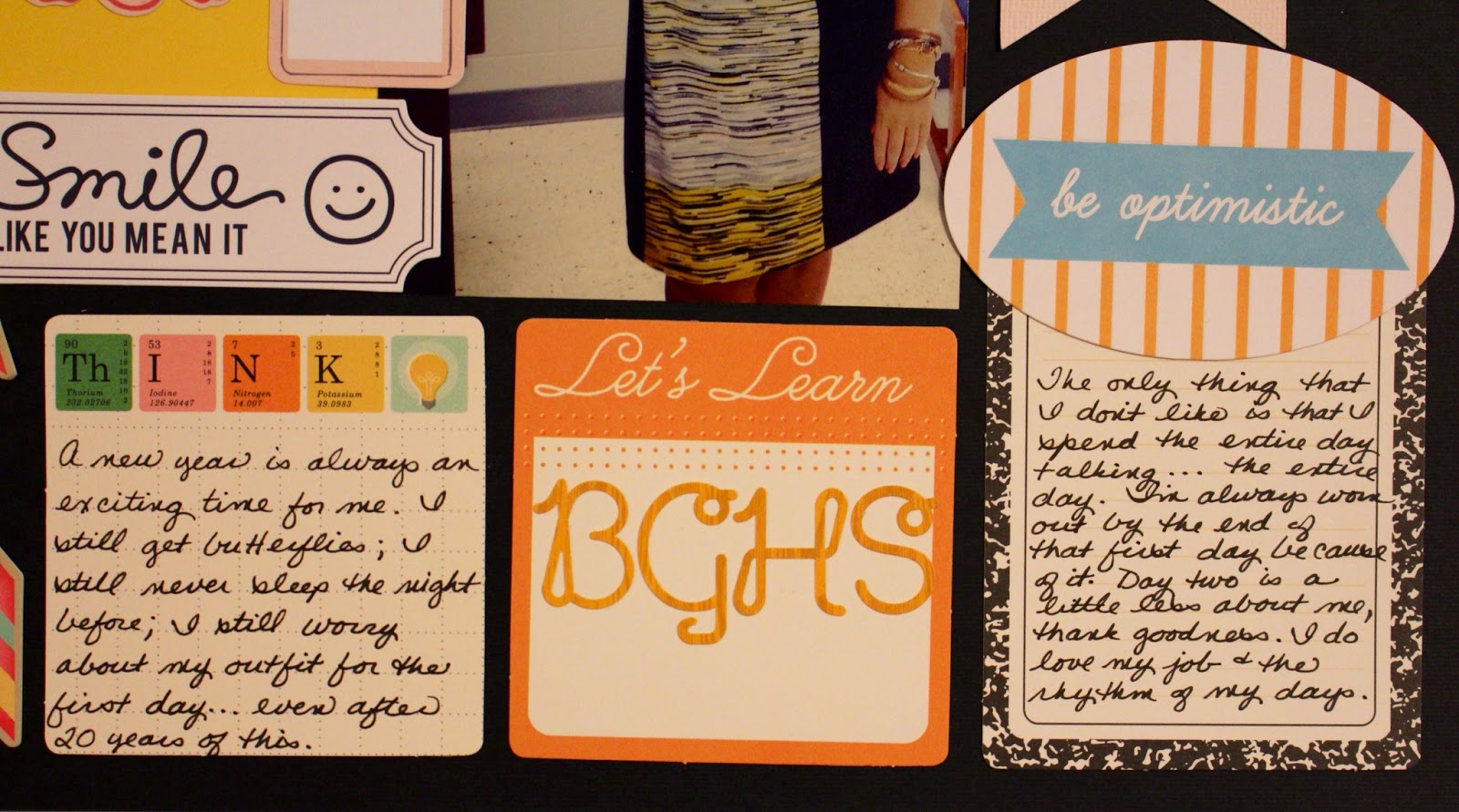 On the 4 X 6 PL style card, I added a red and pink apple diecut as a subtle nod to "apples for the teacher" and a diecut notepad in pink to pick up the pink from the cameo pieces I cut. It also balances out that white space on that card. Without anything there, it just felt too bare. 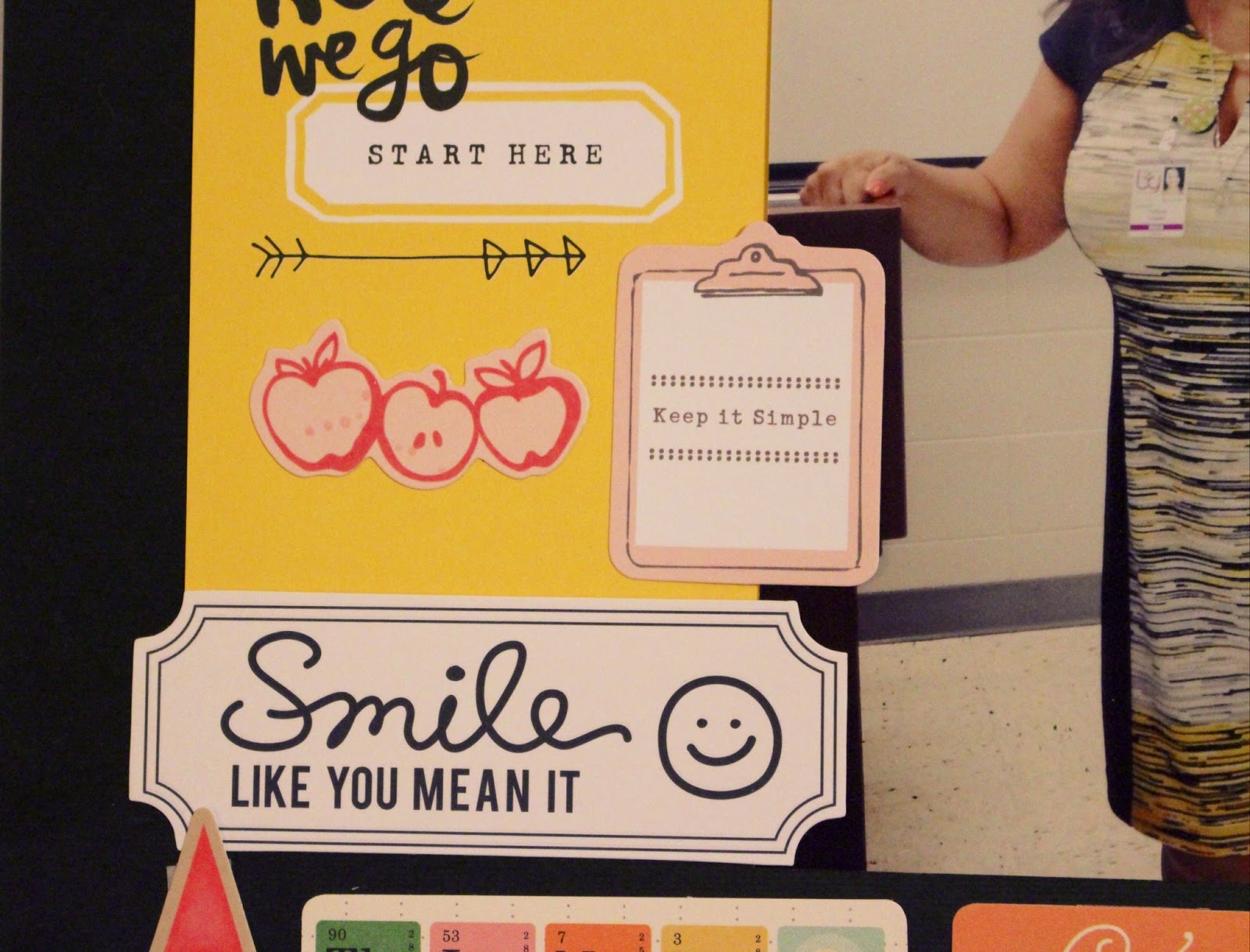 The title of my layout is actually found here in the Cameo pieces - Day 1 Year 20. While the right hand side of the layout isn't a traditional spot for the title, I thought the direction I was facing and the feel of the layout in general called for some balancing pieces there. I really like how the black cardstock shows through the cut words. The "Hello" diecut incorporates the pink, yellow, orange, black, and white in the layout. I thought it needed a bit more substance on the page, so I layered it over an orange scalloped trim journaling spot that I've had for a while. I like how the scallop plays on the flower feel. 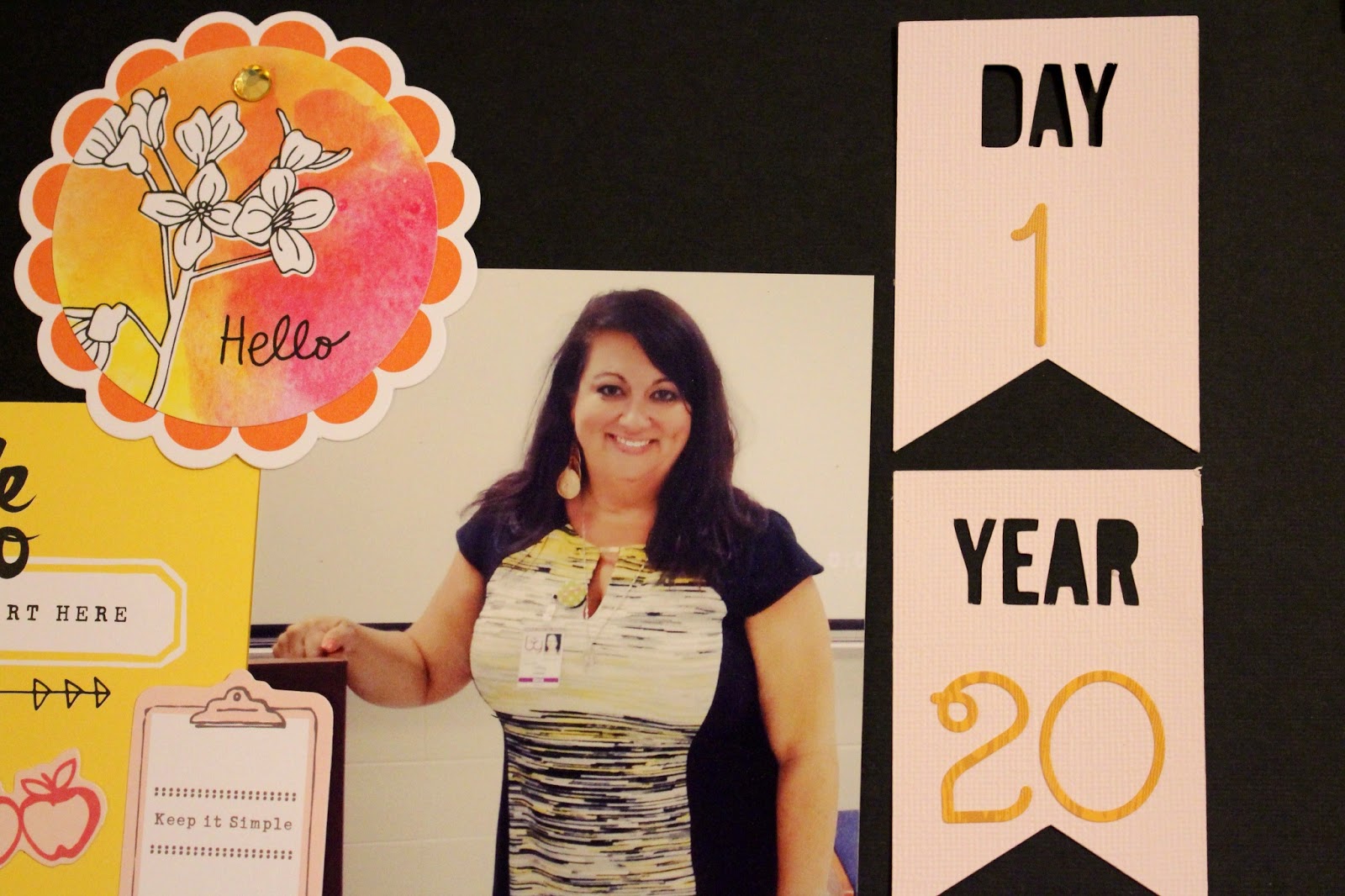 And here's the finished layout: 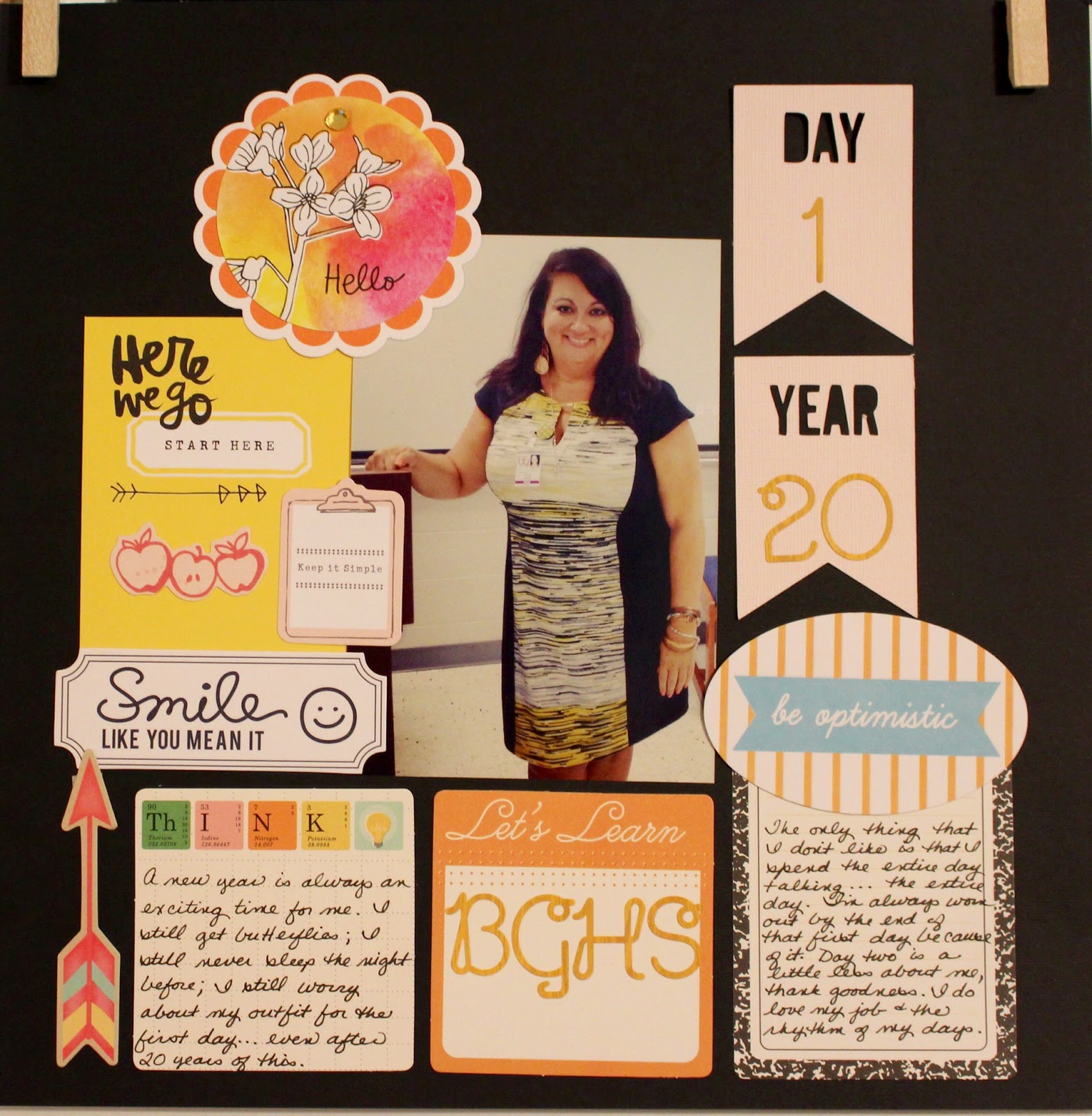 I really enjoyed using my Cameo for a title treatment and plan to play with it a bit more. In fact, I used it on a layout I'll share later in the week too.

Do you use your electronic die-cutting machine very often? If not, why? If so, what are your favorite ways/reasons to use it? I'd love to hear from you.
Posted by Tiffany Lowder at 12:00 PM