For my daughter's birthday, I bought her tickets to the ballet in Nashville. We left right after I got out of school because we knew we'd be pushed for time. The ballet began at 7:30 pm, and we left BG by 4:00 which we thought would be plenty of time. Add in the regular hour's drive + rush hour traffic + construction and we had a longer drive than we anticipated. We arrived in downtown Nashville at 5:30 and still thought that'd give us plenty of time to eat. I called The Old Spaghetti Factory, which is where Kelsey wanted to eat, and they did not have a wait as of 5:12. When we walked in the door at 5:28, the wait was already at over an hour. Bummed, we stepped out and realized that The Melting Pot was right next door. We'd both always wanted to try it, so we took the plunge.

The restaurant itself reminded me of Europe because it's actually below street level. I'm not sure Kelsey had ever eaten in a restaurant like that, but we stepped down a dozen or so stairs into a rather simply elegant space. Since we didn't have reservations, they sat us in the bar. It wasn't ideal, but at this point we couldn't be too choosy. As I glanced at the menu, I realized two things. First, this was going to be much more expensive than Spaghetti Factory, and second, I was worried we wouldn't have enough time to do their recommended 4 course dinner experience. When I voiced this concern to the waiter given our time to depart due to parking and walking to the ballet, he assured me that we'd have time. I shouldn't have listened to him.

The first course was the fondue cheese course with veggies, fruit, and bread. Kelsey chose a nacho, beer style cheese that made me want to kill her. No goat cheese, no brie, nothing super fancy. No, she chose basic nacho dip. Word of warning: don't get this. She enjoyed it, so I guess it wasn't a total loss. 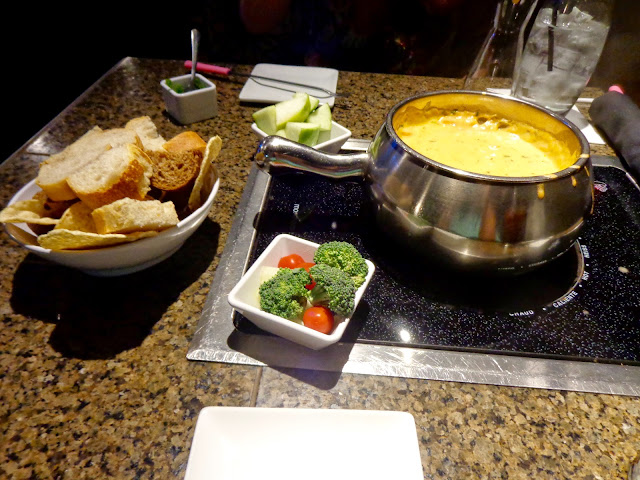 The second course was a salad; I chose a blue cheese and strawberry salad that was fabulous. I wish I could've had four plates of that instead of the rest of the meal, actually. Uh-oh, spoiler alert. Kelsey selected a different salad but loved her choice as well. 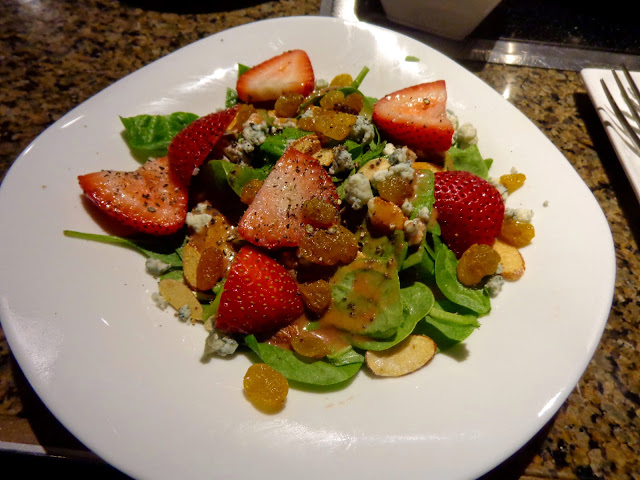 Here is her sassy self dipping into some fondue... 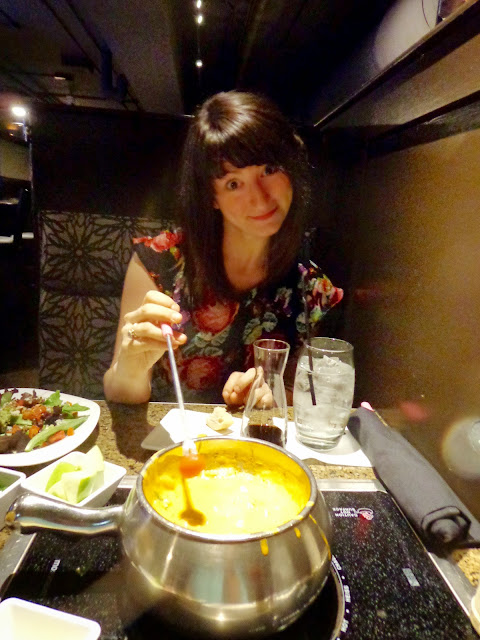 When we ordered our entree, I just didn't really think the whole thing through. You see, you cook your own ingredients. Since Kelsey is a vegetarian, that meant that I couldn't cook my meal for my entree until after every other thing we ordered had been cooked. Well, that took a while. Y'all know how long it takes potatoes and broccoli and stuff to cook, right? The other thing I didn't consider is that I hate boiled meat. Yeah, I should have gone with the vegetarian option too. Live and learn. 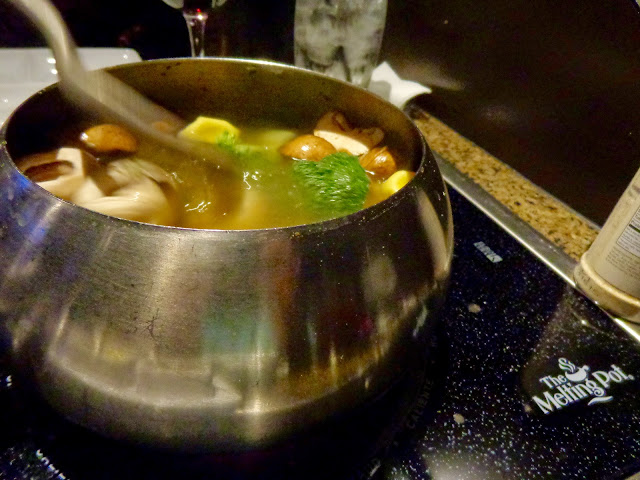 Unfortunately,  I was checking my phone the whole time for how long we had until we had to rush to the ballet. The blackberry mojito I enjoyed def helped take the edge off though. Kelsey stuck with a glass of pinot noir. (Can you tell this is a candid shot? Haha!) 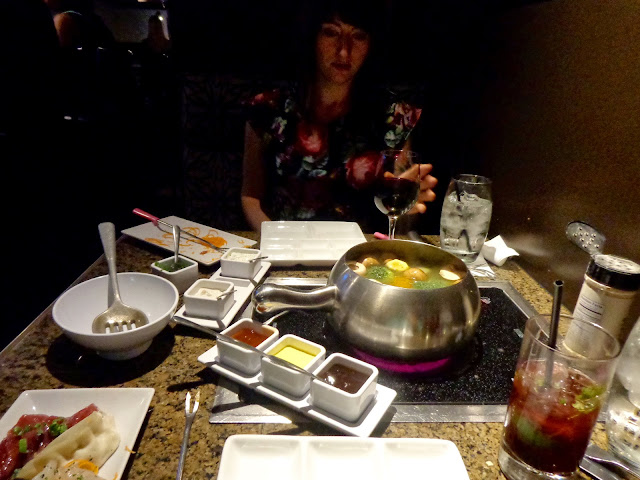 Here's a quick pick of me that she took at the table. Notice the tray of raw meet to my left. I like meat, but that was totally unappetizing. I can imagine how much it grossed out Kelsey since she's a vegetarian. 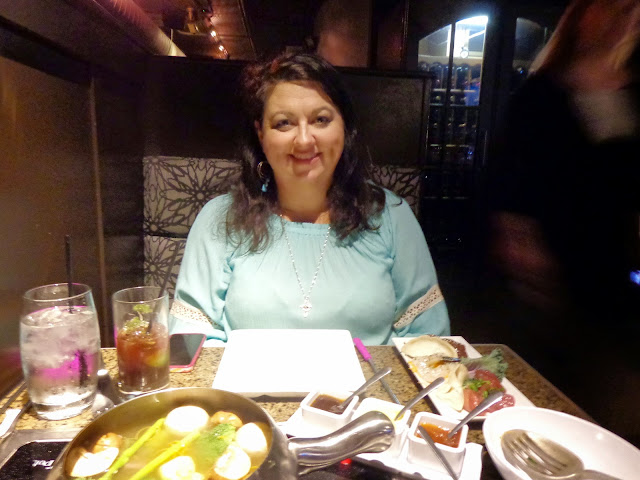 Check out my cooked veggies. They were boiled and tasted exactly how you'd expect, pretty bland overall. 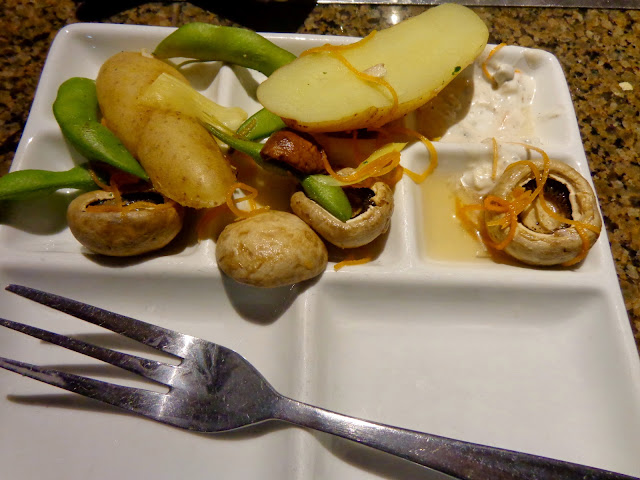 And here's my plate with the boiled meat on it. Just, don't choose this unless you like boiled critter from the sea and land. 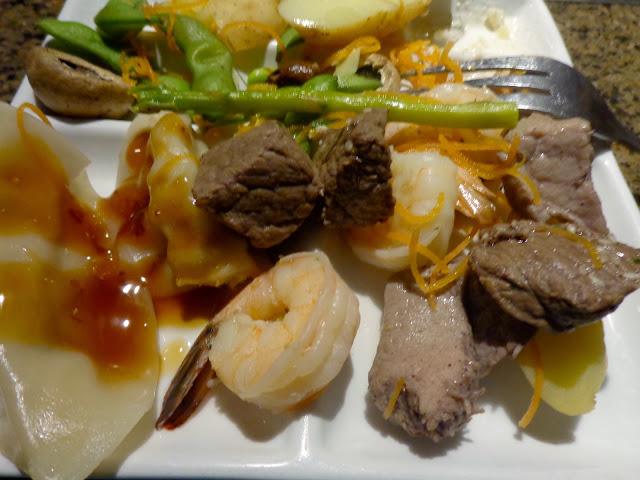 Our final course was the dessert course - fruit and cakes dipped in a dark and white chocolate fondue mixture. I definitely enjoyed this part. 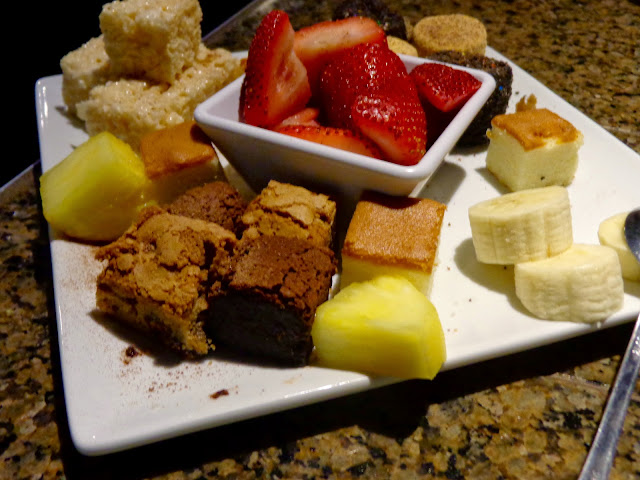 They even put a yin/yang design in the chocolate for us. 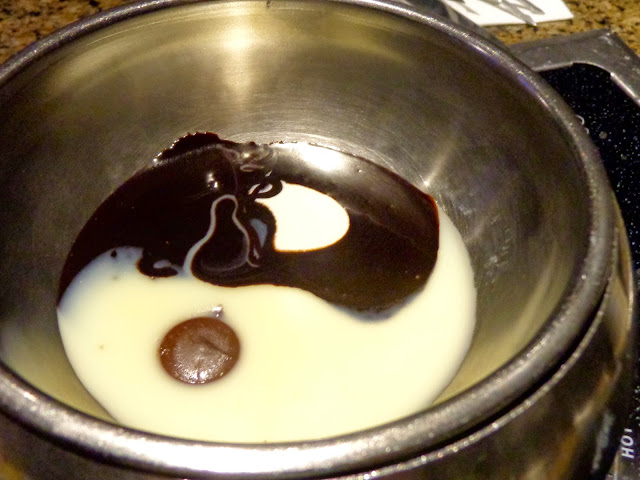 Final tally?  Parking was $10 and the meal was $118 before the tip. We did not have enough time to enjoy any of our courses and shouldn't have allowed the waiter to convince us that we did. In fact, we were 10 minutes late for the ballet and missed the very beginning of it. Grr!

Kelsey and I both agreed that we'd stick to cheese and chocolate if we ever returned. My ultimate review - we prob won't go back. It's just not worth the time and money for what is pretty bland food overall.
Posted by Tiffany Lowder at 12:00 AM