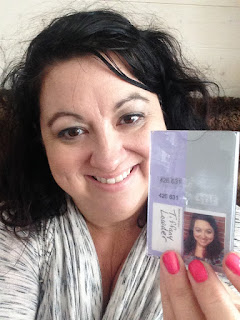 When I arrived in Paris, one of the first things I did was get my Navigo Decouverte pass - you can see me holding it here. The card itself was 5 euros, but loading it for the month for zones 1-5 was 116 euros. That's a big chunk of change but certainly not more than I usually spend in gas each month at home. Even better? It's for unlimited uses, so I can flit around Paris on the Metro to my heart's content. 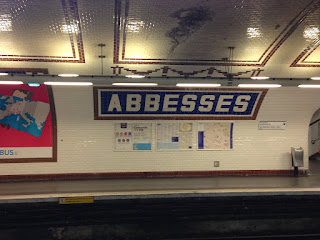 My metro stop for 'home' is Abbesses in the 18th Arrondissement of Montmartre. Thankfully, my apartment is just about a three minute walk from the metro if I take the steep stairs. If I go the long way around to avoid the stairs, the walk is about seven minutes total. Usually, there are lots of people in the street whenever I walk home; ironically, that makes me feel more secure than deserted streets would. When I went to meet Tonia at the airport super early in the morning, the streets were eerily quiet. 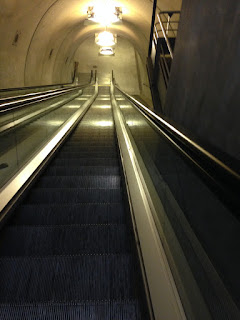 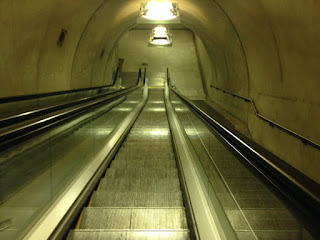 In each station, you have to determine which line you want to take and which direction you want to travel. For example, I'm on line 12 (green) and going into the city, I take it via the direction of Marie d'Issy. When I'm going home in the evening, I have to find line 12 and travel in the direction of Aubervilliers. There are maps in the station to follow, certainly, but I downloaded the Paris RATP Metro  It was free to iPhone and has been a lifesaver. I simply plug in the metro station point where I'm starting and where I want to go; it maps for me the lines I should take and the stations I will change in on my journey. It also estimates for me the total amount of time my journey will take. Best part? It doesn't need wifi or any sort of internet function to work, so it doesn't cost me onmy data plan. 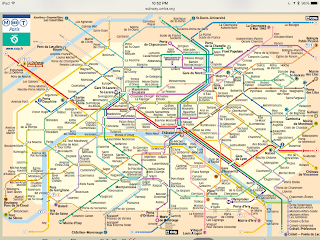 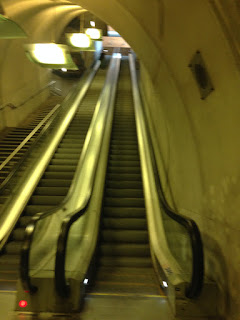 Some metro stations have escalators, but all of them have stairs. They also have long, winding tunnels that veer off into a multitude of directions. It can be a little overwhelming at rush hour when the tunnels are packed with people rushing in every direction, but it's way more disconcerting to find yourself in an empty tunnel. I guess I subscribe to the safety in numbers idea. 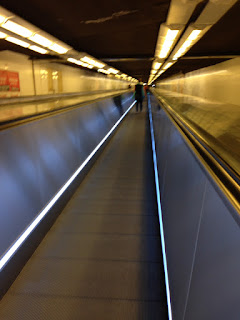 Some stations are very modern and sleek and clean like the ones you see here; others are in a bit more disrepair and need some work. Sometimes the tunnels smell a bit because of sewer issues in a large city. Yes, there are homeless people who camp  out in some of the tunnels, but there are also entertainers who perform and try to make a bit of cash at the same time. I've heard everything from George Ezra and the Beatles to Frank Sinatra and traditional French accordion music. One of these days, I want to stand and listen to these performers and maybe video it for y'all. (I'll have to make sure I have change on hand to give to the musicians.) 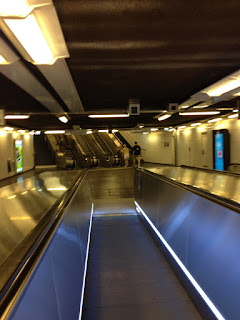 Some stations are so large that they even have the moving sidewalks in them like you see at the airport. 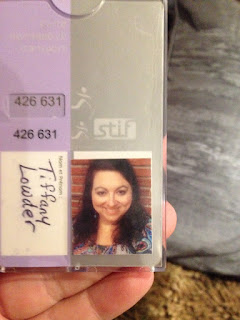 Here's a closeup of my navigo card - I got to bring my own picture with me to use on it. 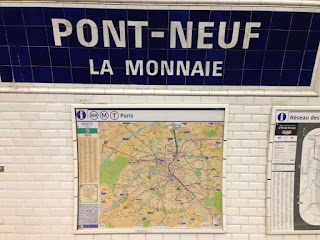 Here's a look at the city map that you canf ind inside of each metro station; it helps you orient yourself to the neighborhood and hopefully take the correct exit from the station for the place you're planning to visit. 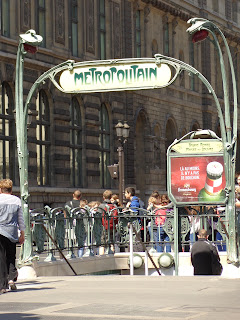 And here's what a metro station looks like from above ground - they are uniform in appearance to make it easy for people to spot them.

Hope you guys enjoyed my little glimpse into the Paris Metro. Next up on my list, try riding a city bus. :)

Posted by Tiffany Lowder at 6:54 PM