Since this week was homecoming week, I had the opportunity to 'dress up' each day along with the kids. While I didn't go 'all out' like many of the teenagers do, I did try to make my outfit correspond to the theme of each day. Check out what homecoming week looked like for the Purples.

Monday -- camo day. I don't own any camo myself since I'm not much of a country girl, but my boy bestie was willing to let me borrow one of his old uniform jackets. It's handy to have good friends who will hook you up with the necessary outfits. All day long, my male students wanted to know where I'd gotten my obviously army issued clothing. ;) 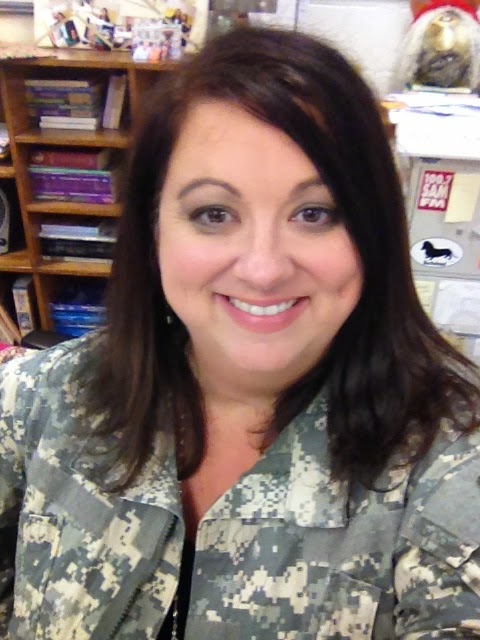 Tuesday -- superhero day. Here I am posing with my friend, Candy, who was also wearing her BatGirl tshirt. Since we were twinkies, we had to take a pic together in the hallway. Ironically, another friend of ours took the first pic, but we liked our selfie shot better. Hahahaha! 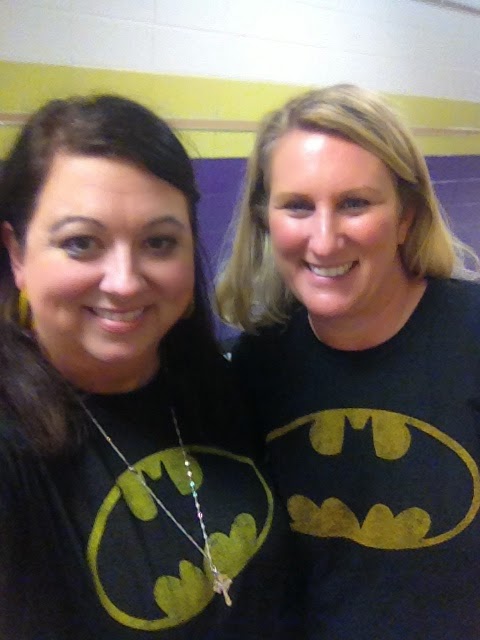 Wednesday -- luau day. Whew - Wednesday was a rough day. I barely managed to snap any picture at all. This shot of me lying in my living room at home after work was all that I wound up with from that day. It wasn't really a luau outfit, but a one shoulder large printed floral dress that I covered up with a black cardigan to make school appropriate. As I told one of my senior girls when she asked me where my coconut bra was, "Girl, coconuts don't grow that big." Lol -true story. 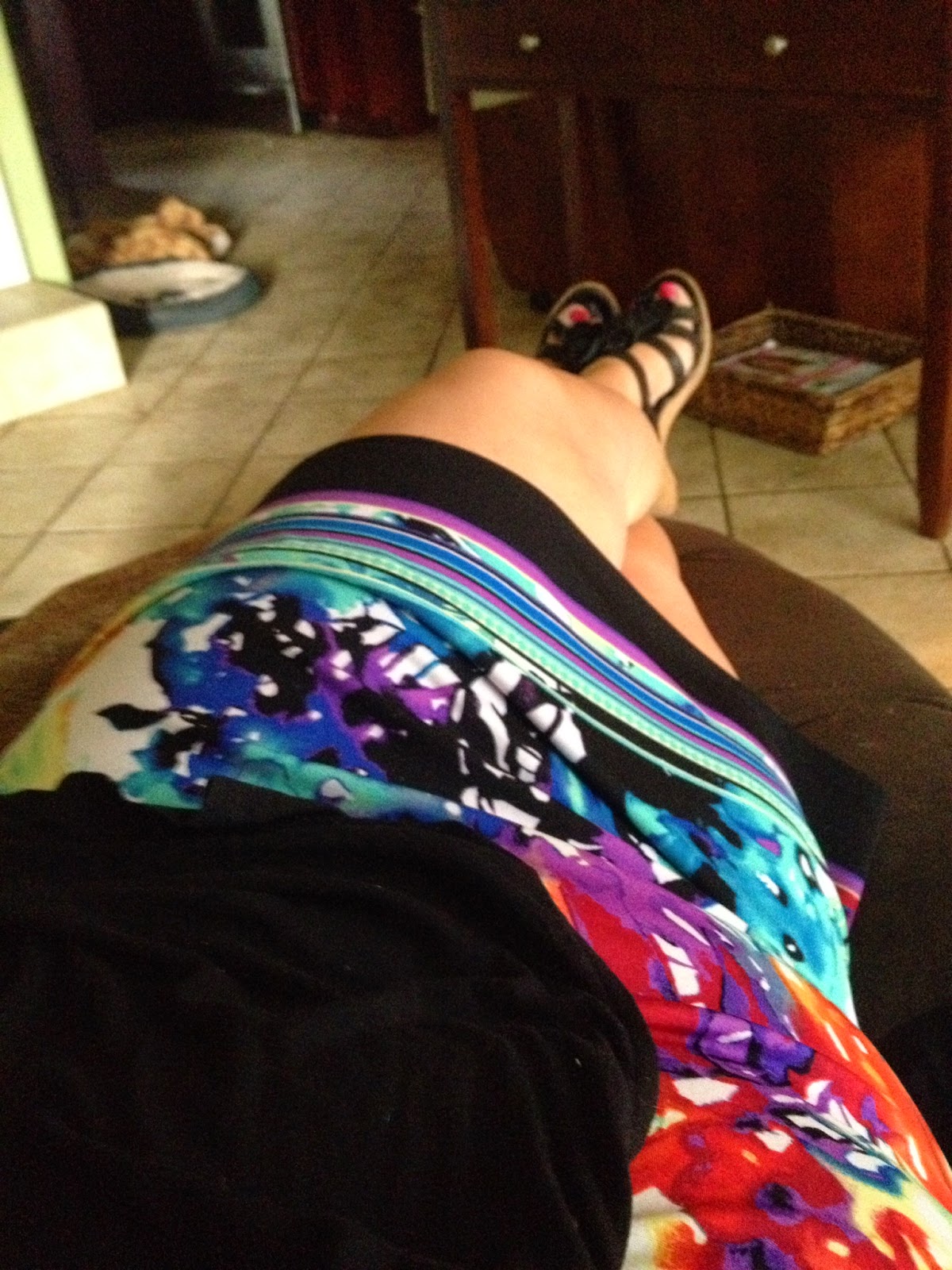 Thursday -- 'merica day. Just like I don't own any camo, I also don't own anything with the American flag on it. Call me crazy, but I'm not a fan of flag printed clothing. (IMO, flags belong on flagpoles.) Anyway, I tried to follow along with the day by wearing red, white, and blue instead. It wasn't especially original or flamboyant, but my outfit got the job done. 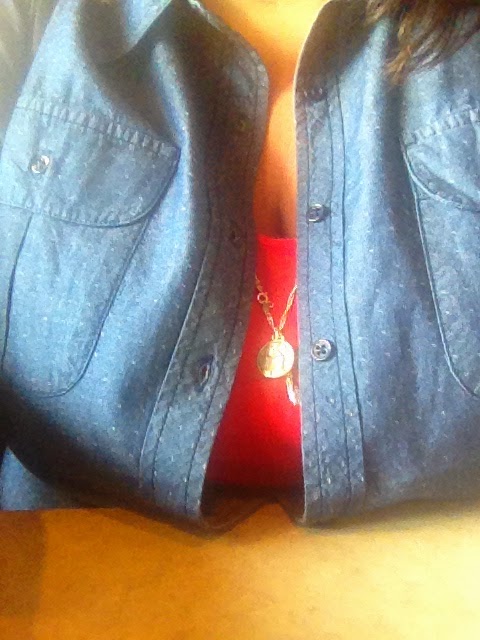 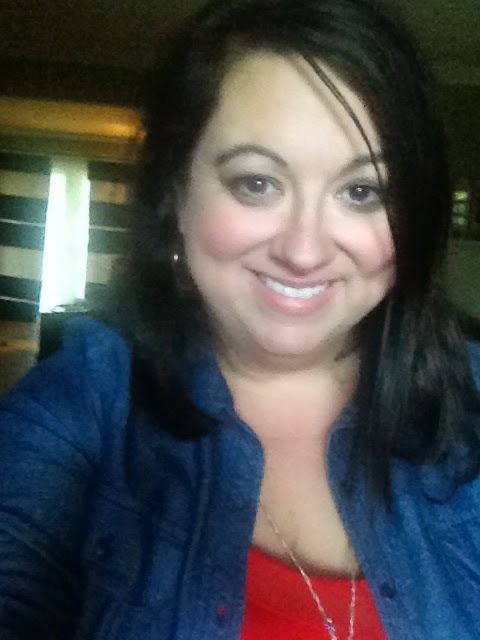 Friday -- purple and gold day. I'm still looking pretty tired here, aren't I? I sported my homemade spirit shirt and bandanna with jean floods and the decorated shoes that one of my students made me last year. 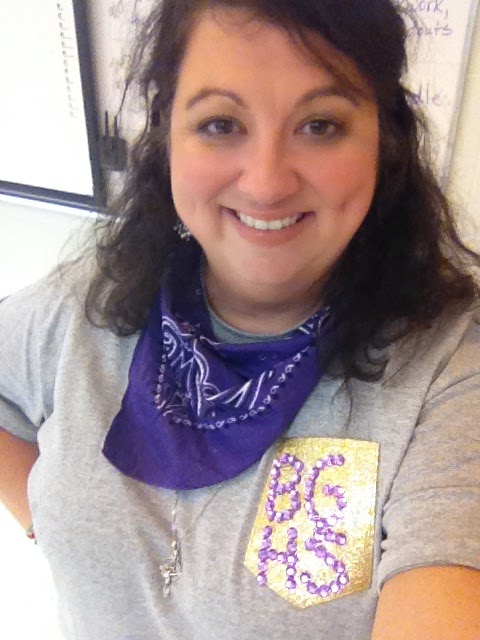 Another student brought in a crown and tutu that she asked me to try on before class. As you can see, I thought it was hilarious. I'm grinning like a maniac. All fun and all good...I'm just super classy, you know. Can't you tell from my outfit? 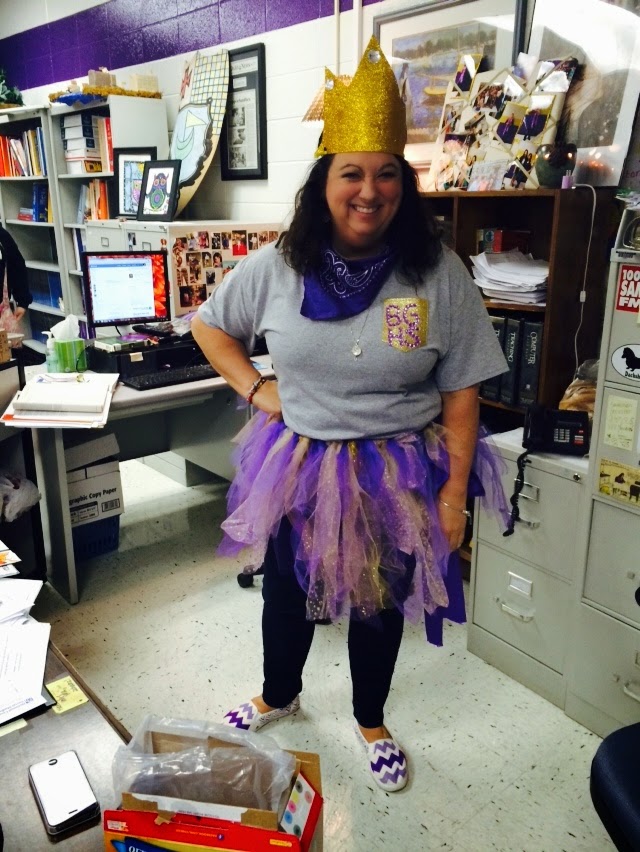 We finished the day with a pep rally outside at the stadium old-school style. Not all of the kids were really 'into' it, but I certainly enjoyed it. The weather was gorgeous, and I loved being outside. 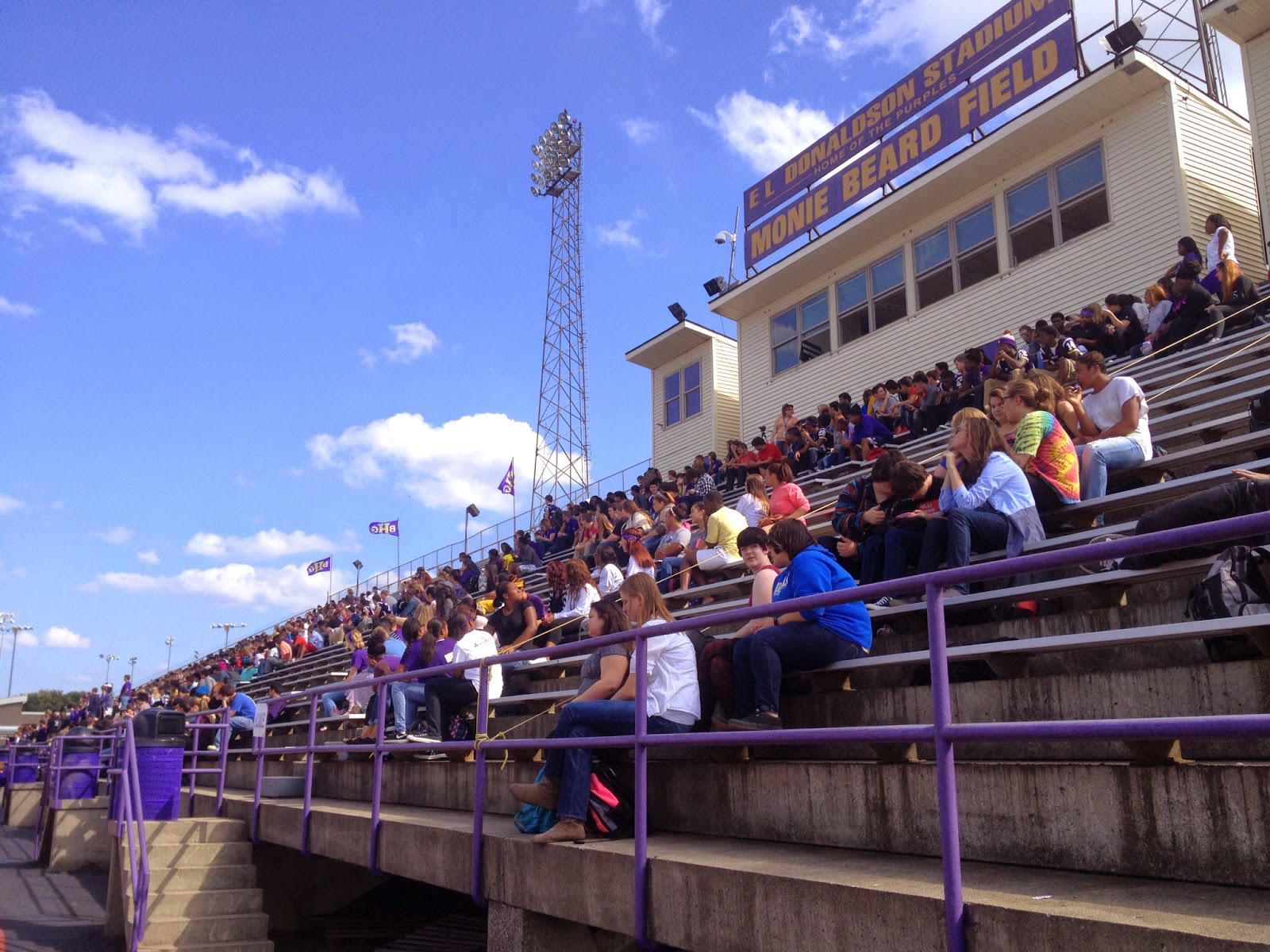 Unfortunately, the Purples fell short of victory at the game Friday night and lost to McCallie (TN) by a score of 21-20. It was a heartbreaking loss, but the opposing team pulled out all the stops in the last 5 minutes of the game and won. Unfortunately, many of the McCallie fans (mostly parents) acted like total asses at the game, but that's just how it goes sometimes.  This is the pic that ran in our local newspaper on Saturday morning. Any loss is difficult, but our kids had been on a 48 game winning streak, one of the longest in the country and only the second longest streak ever in our state history. Even though we've won three straight state championship titles in football, these kids really wanted the win against McCallie too. (Fwiw, we're a public high school with a 40% free/reduced lunch rate and 30% tuition base while McCallie is a private boarding school where families pay $42,000 for their kids to attend.) There'll be another game next week, and I sure hope that our kids recover from the loss and give it all their heart as they have for the last 48 games. Whatever the outcome, I'll continue to be a diehard fan for years to come. 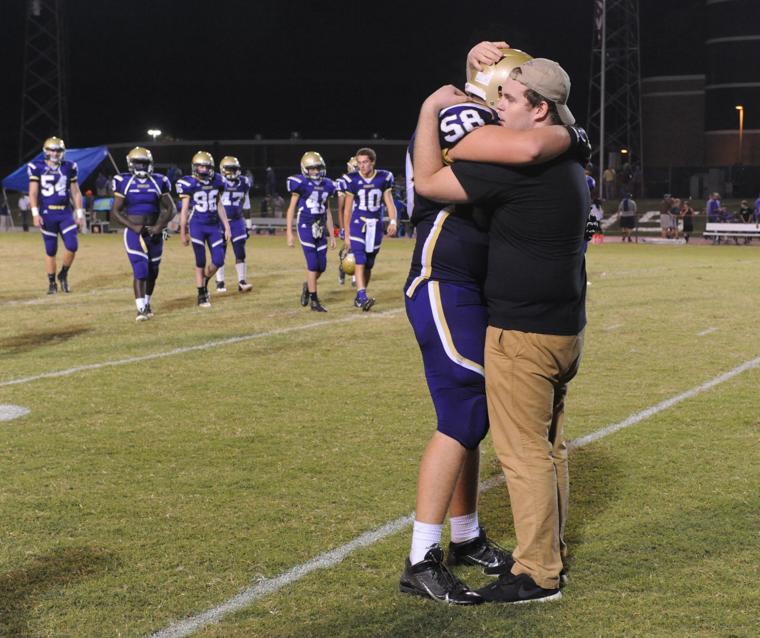 Hope you enjoyed this walk down the high school homecoming memory lane! Go Purples!
Posted by Tiffany Lowder at 12:00 AM

Email ThisBlogThis!Share to TwitterShare to FacebookShare to Pinterest
Labels: Teaching