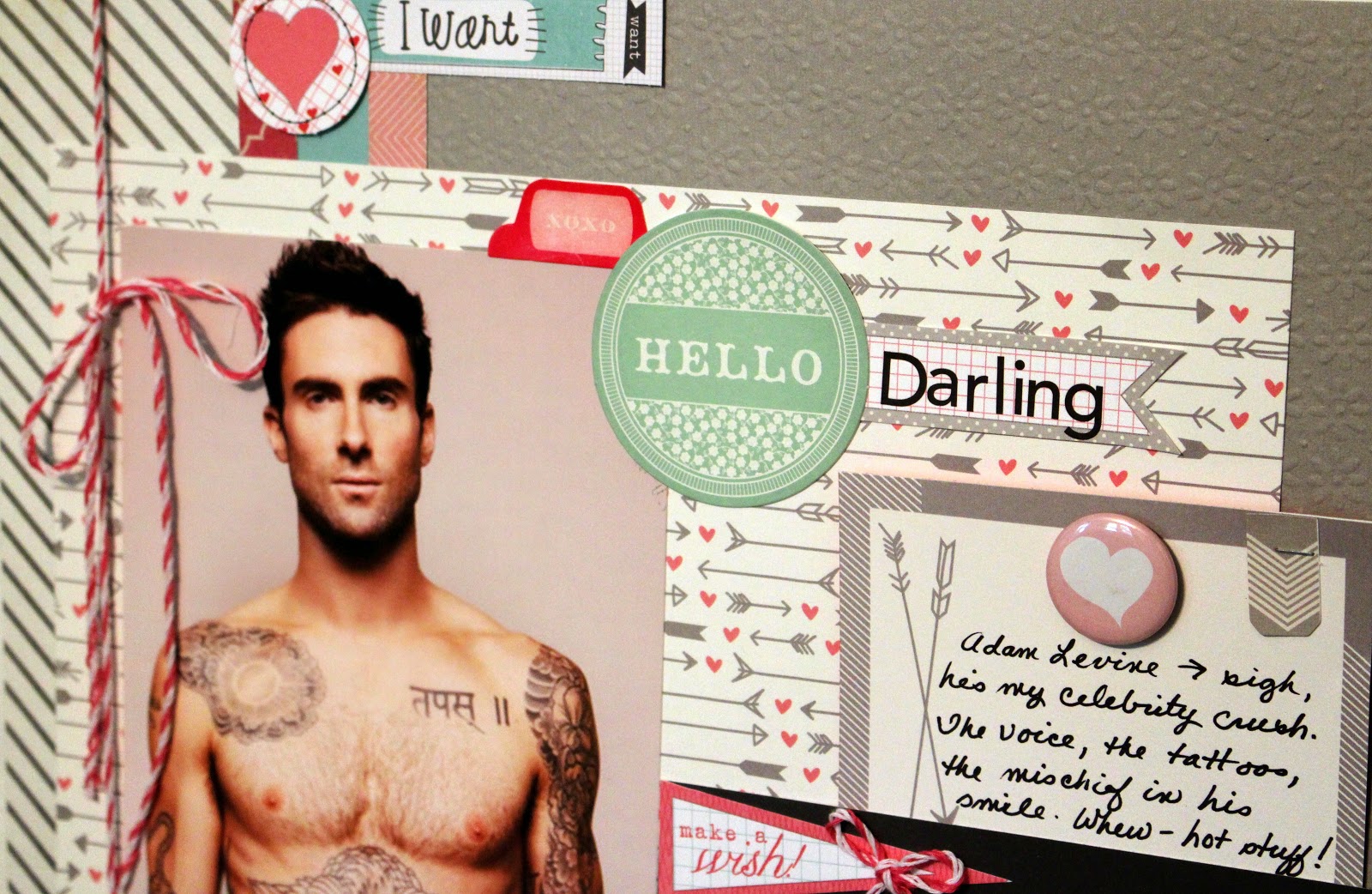 Were you waiting for it? Oh yeah, baby, I had to make a layout about my boyfriend, aka Adam Levine.

Of course, I've never met Adam, so it's not like I have any pictures of him.I don't like stalk him or anything. Honest. What did I do, then? Why, I got on my handy-dandy laptop and did a google image search. There were several pictures I could have chosen from, but why not go with my favorite? Wink, wink. These were the two that I considered, but I ultimately decided to just use the one. I printed out that baby on my home printer and got busy making the layout. 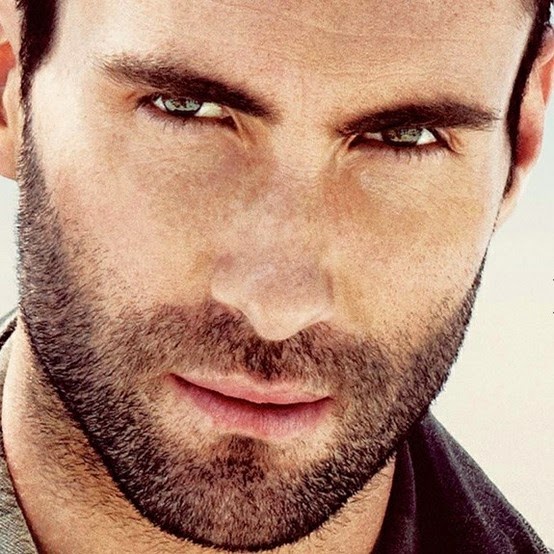 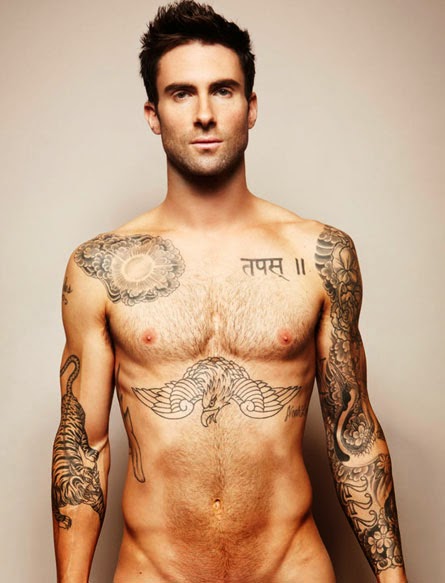 I wasn't feeling particularly inspired, even with the great photo to use. Since I had no ideas already floating around in my head, I decided to look for something online to inspire me. I found this great layout by Maggie Massey for Studio Calico and thought I'd try to copy some of the elements that I liked best. 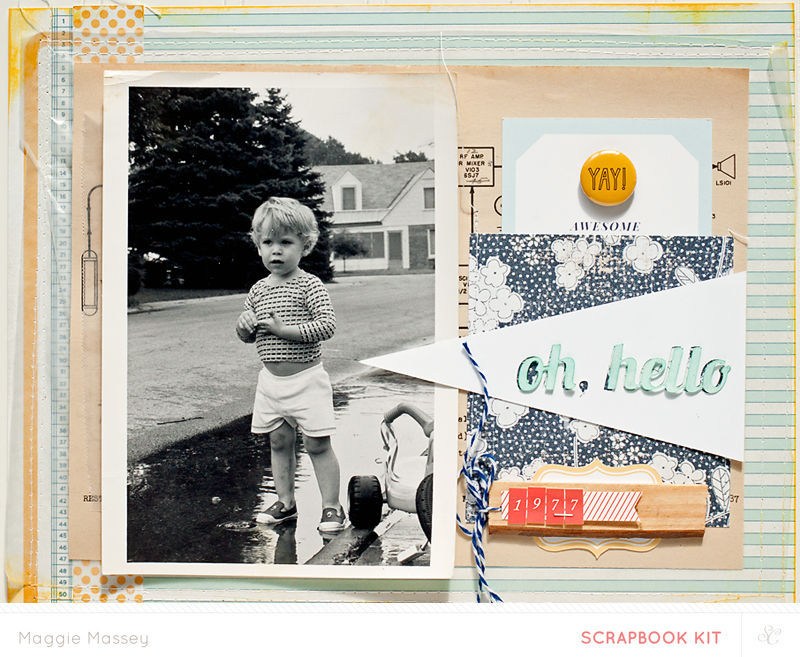 I didn't have those products on hand, so really I was going to focus on the placement of items on the page more than specific elements.

For some reason, I forgot to take pics as I worked, so you'll only see pics of the finished project. Sorry! (I guess I'm assuming that you like the in-progress pics; maybe you don't care one way or the other.)

As I thumbed through my paper, I realized I could use almost any color because he's basically naked on a plain background. After looking through my new product stack, I came across the Elle's Studio Love collection (I think that's what it's called) that I had paper and cut apart cards and embellishments for -- ding, ding! That would be perfect. While it's about real love, there's no rule that says I couldn't use it for a celebrity crush kind of love too. The gray embossed cardstock was the perfect accompaniment to that line.

Here's a closeup of the title block:  I really want to learn to use my Cameo to make awesome titles like Maggie does in the original, but I wasn't ready to work on that when I made this layout. I knew I didn't have a lot of time, so I stuck with what I know - letter stickers. Don't hate on my love of letter stickers, people! 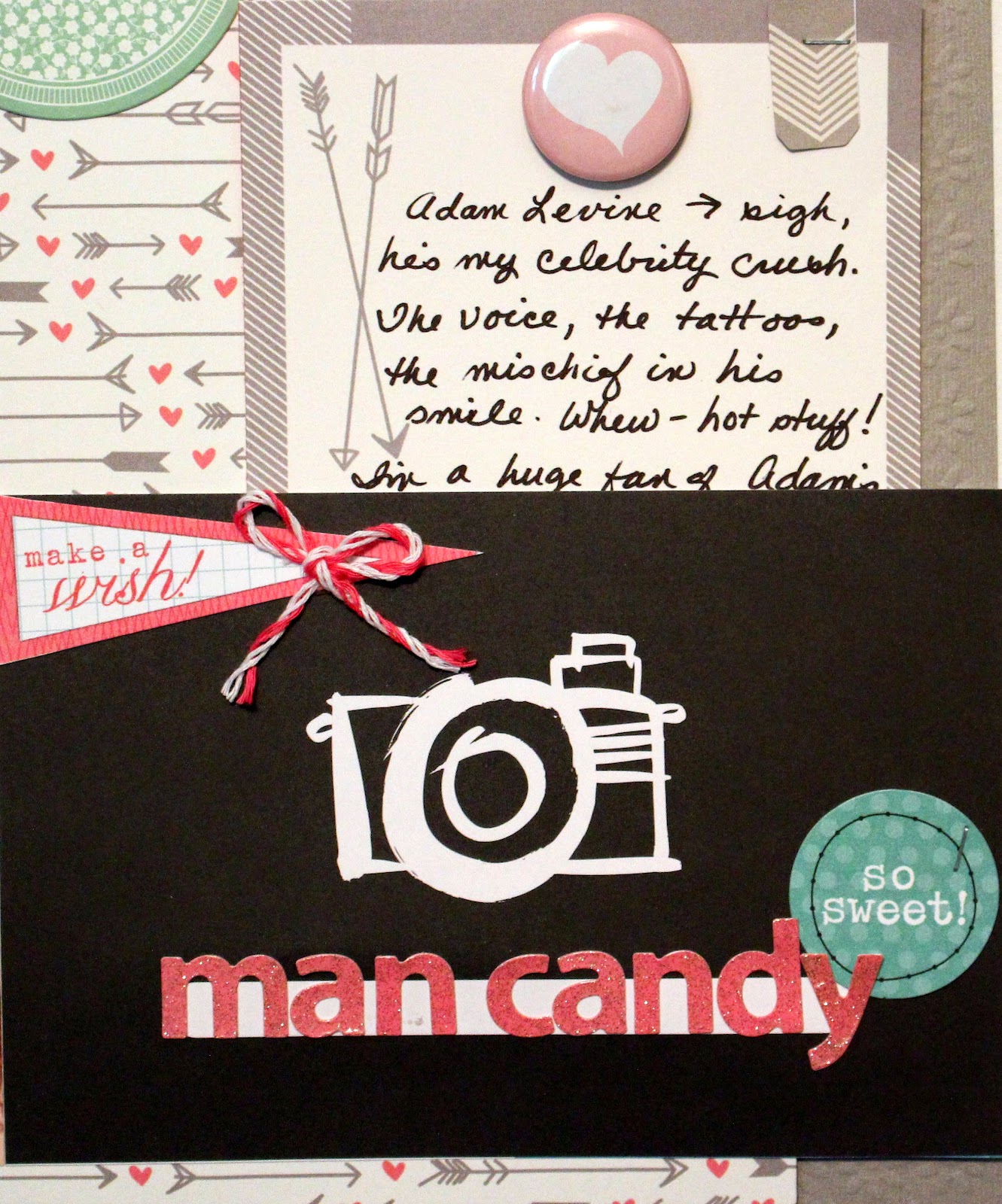 And here's a closeup of the journaling:  You'll notice that I tucked the journaling behind a cut-apart card which is reminiscent of the original layout by Maggie Massey. 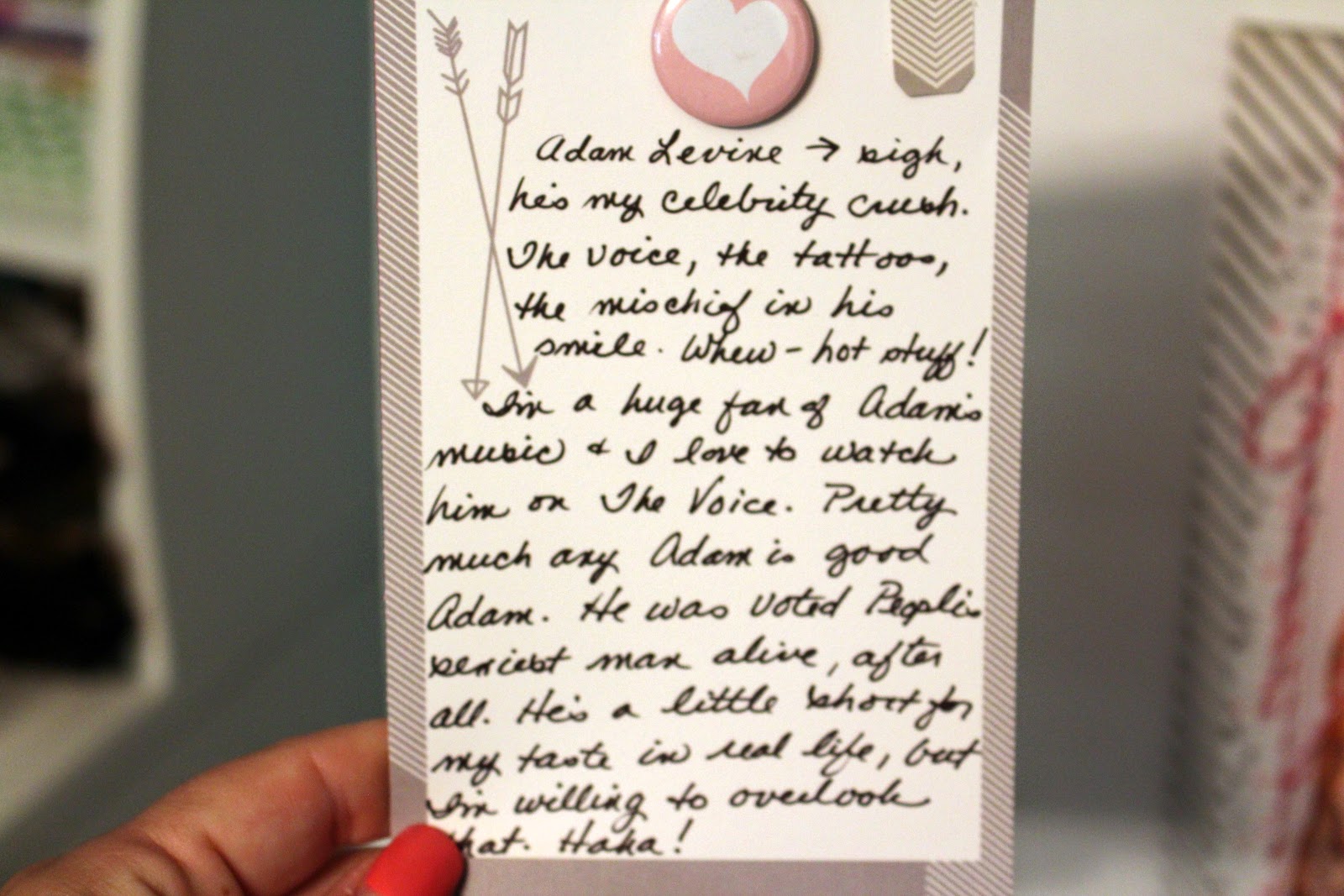 And an embellishment closeup too - 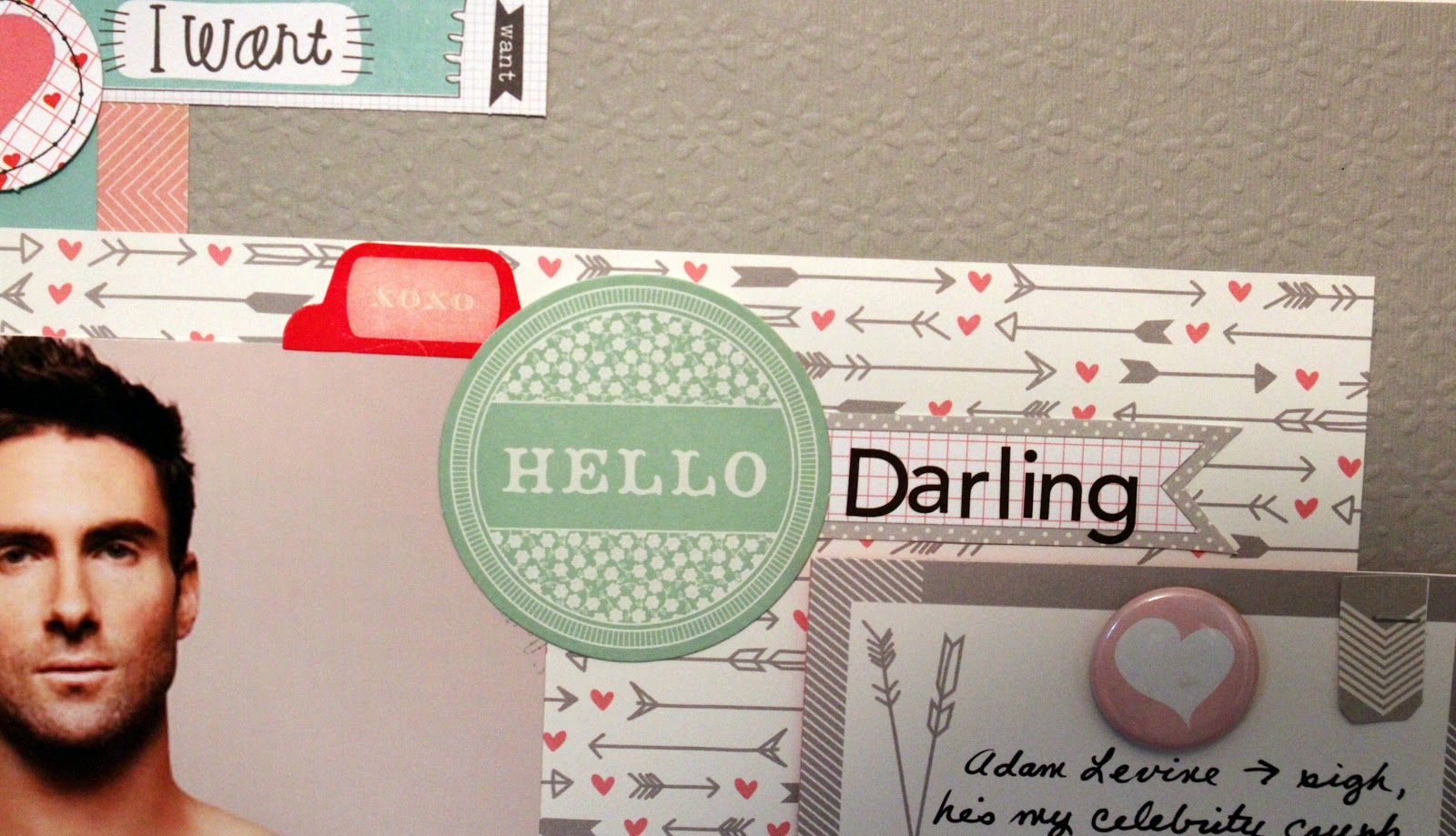 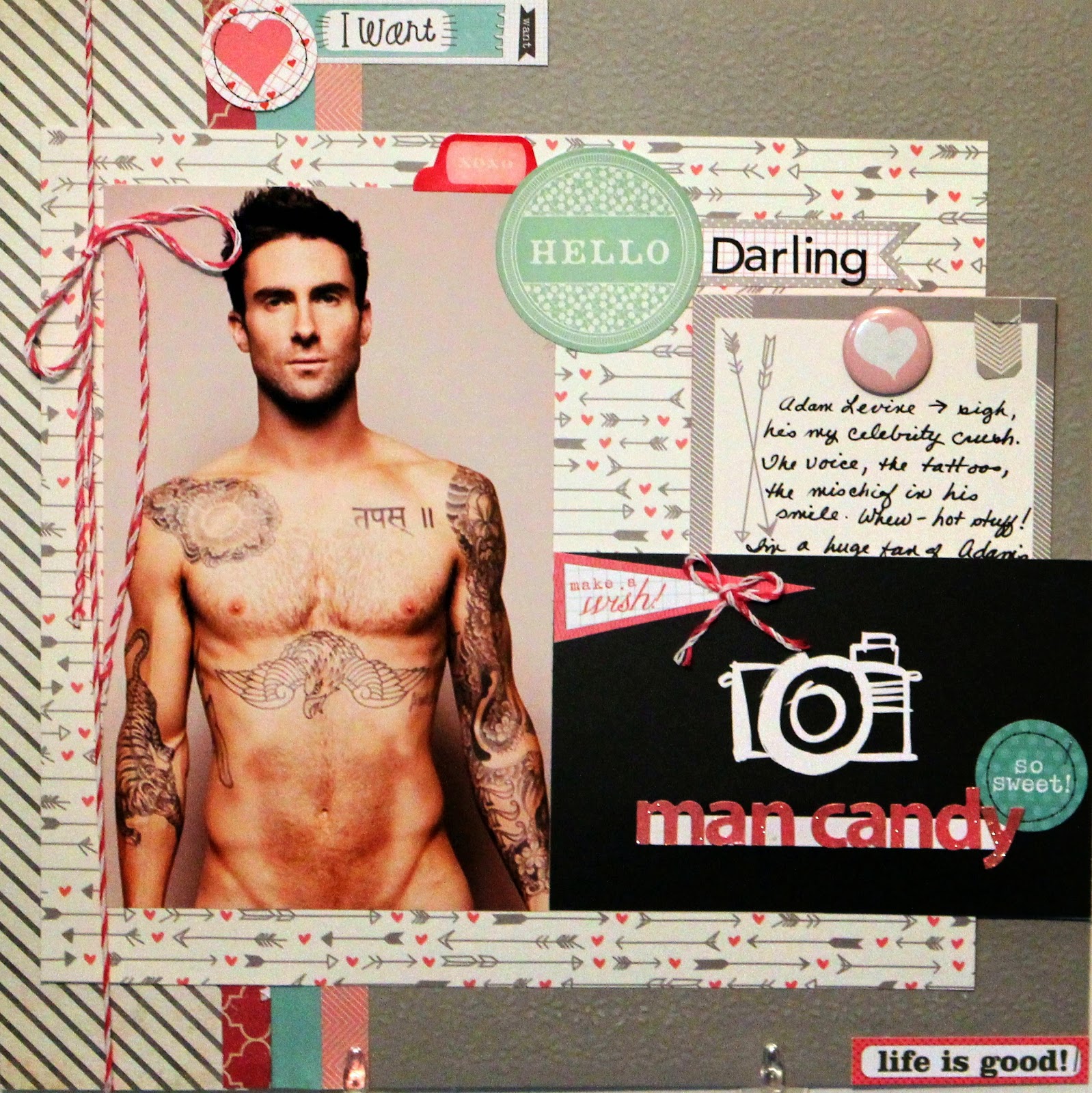 The takeaway: this layout was so much fun! Since I scraplifted, there was no pressure to come up with a great design; instead, I could just focus on the fun parts by choosing products I loved and putting it all together. I've never done a layout like this before, so that was a nice change too. I managed to put it all together in just under 45 minutes which is like a record for me or something.

What celebrity crush would you like to include in your scrapbook? If you don't have one, how about one that your kids have or one from your teenage years? It was so much fun to do, that I think I might have to revisit this topic periodically. ;)
Posted by Tiffany Lowder at 12:00 AM