Sharing a layout - Scrapbooking an event 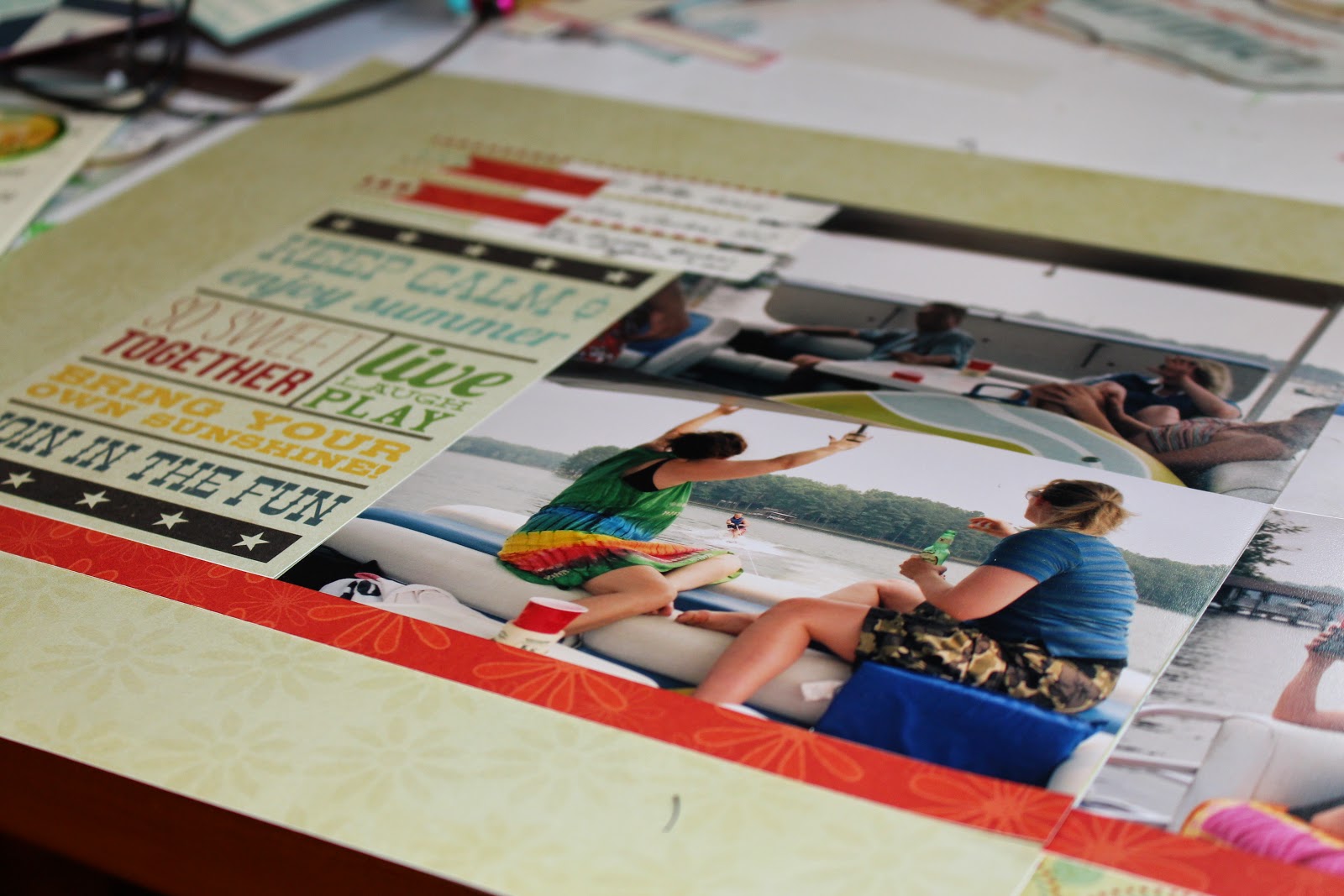 ScrapGals has a new podcast posted where we discuss various threads from twopeasinabucket and give our perspective on the issues. In this episode, we discuss a question posted by someone who wondered if anyone still scrapbooks events or theme pages. I decided to make that my first layout to share this week, and it was definitely a challenge.

I realized that I didn't have many current event type photos to make a layout from because I've been doing Project Life. For me, PL is the place that I put most event type items. That meant I needed to check out my backlog of pictures. It's a double-edged sword, you know. I want to use the photos from years past, but I'm often not inspired by those pics and/or the pics themselves either aren't great quality or are the 'wrong' size for whatever I have planned. I decided to charge forward, though. 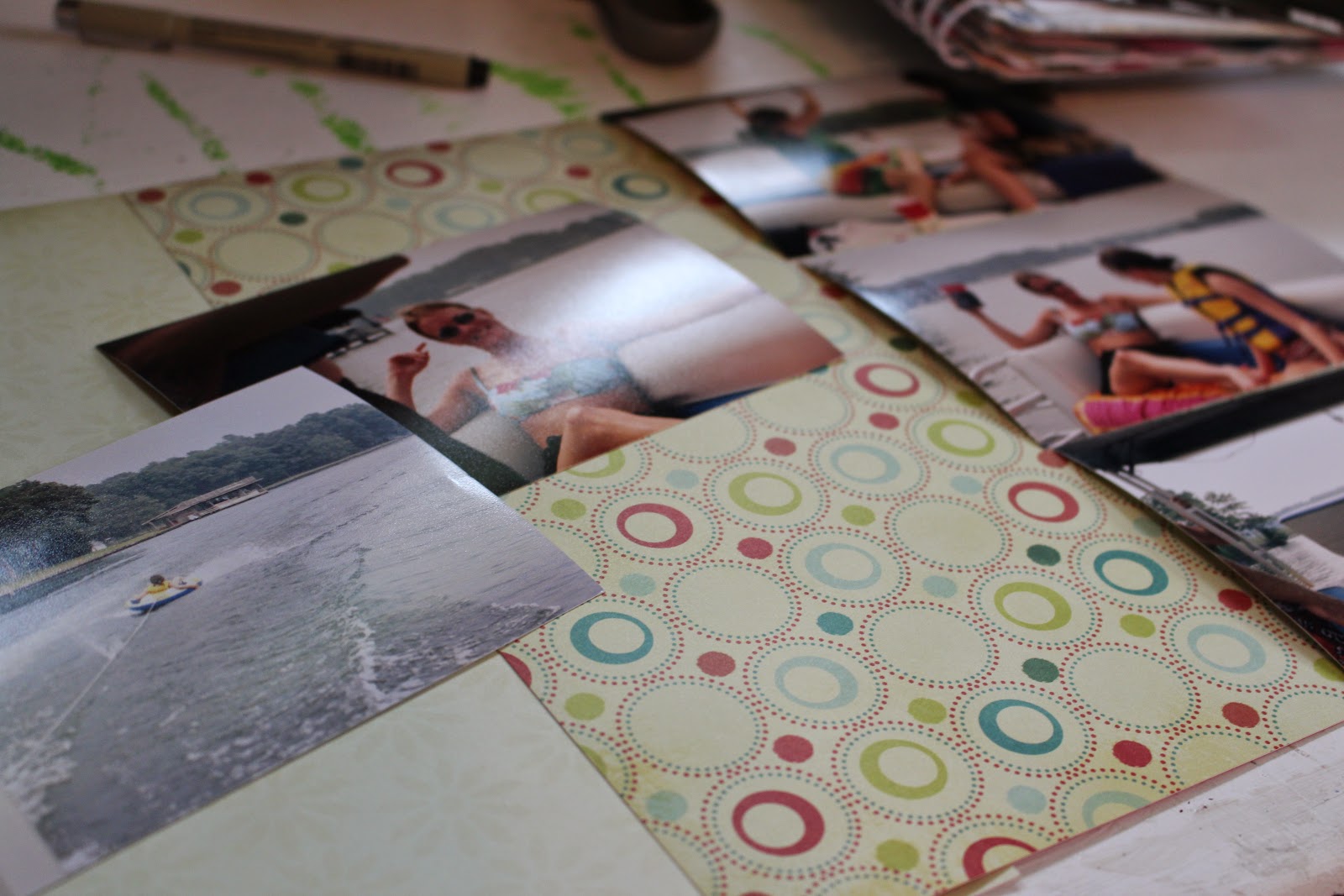 I found a series of pictures from a visit to my dad's house in NC from about 2004. It was one of the last times the family was all together visiting, so I do look at the pictures fondly because of that. For some reason, neither my brother nor my ex-husband nor I are in the pics from our day of boating even though we were all there. It's not ideal, but it's okay since I mentioned they were there in the journaling. I'm trying to just go with the flow in this process, but it's hard to do sometimes.

I narrowed down my pics into two sections - a day boating on the lake and a day of craftiness as a family. There were 5 boating pics, but I decided not to use one of them because it was poorly composed. (Photo-bombed by a guy in our family - only his side and swim trunks were showing.) Once I'd chosen the four photos, I immediately considered cropping them to 4 X 4 so I could fit everything on a single page layout. I couldn't make it work; I'd zoomed in too much in taking the pics for cropping to be effective.

Maybe a scraplift would help. I looked on my Pinterest scrapbooking board but didn't see anything that was a two page spread that I wanted to lift. Plan B was to look at my sketches board. Bingo! I found a set of sketches from last April from Creating Keepsakes magazine and decided to use that as my guide. 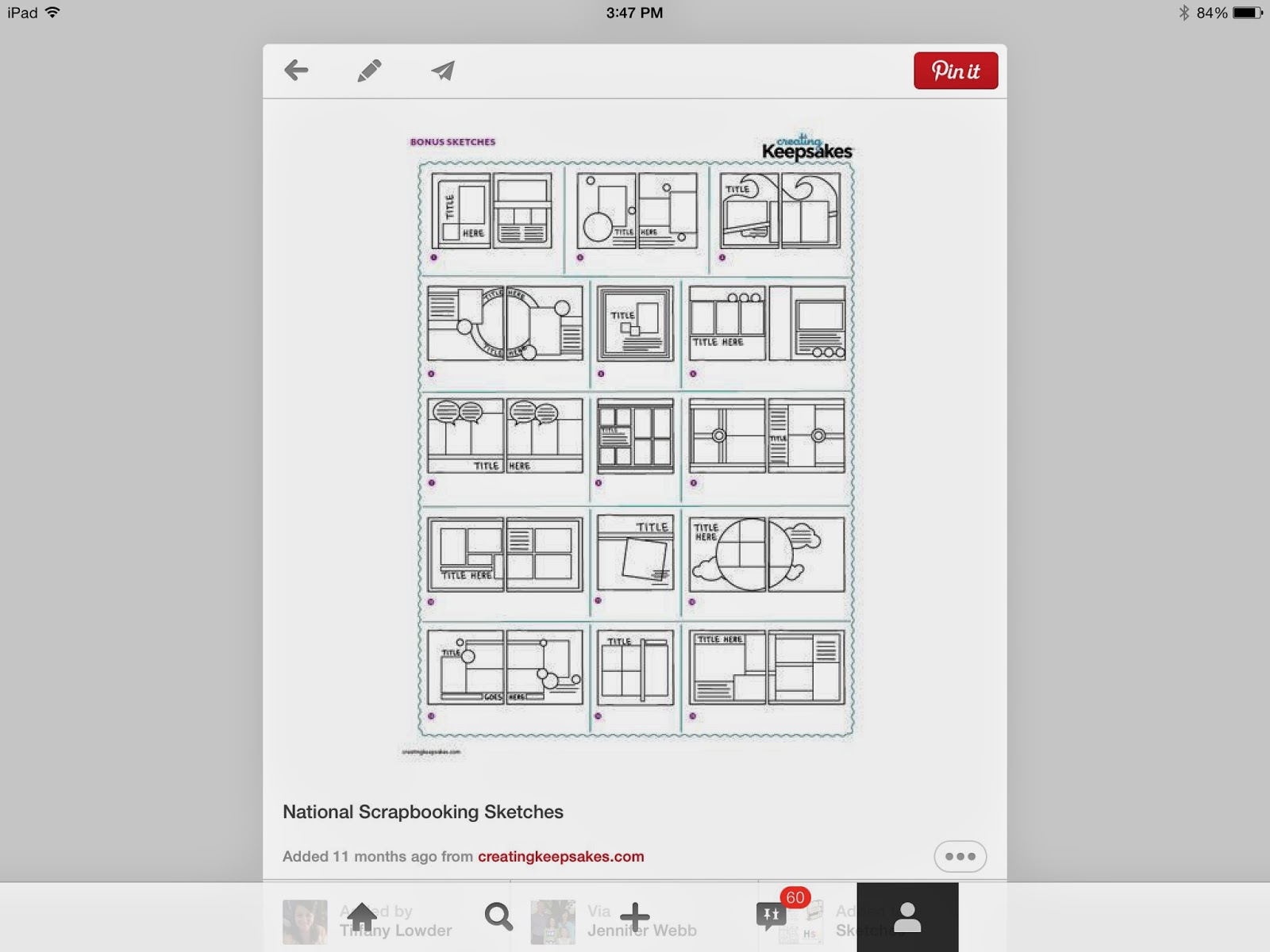 Next up, I looked through my paper stash for something that would evoke feelings of water and/or summer. I found some old paper by fromAtoZ and thought it'd be a good fit. I'm not sure how old it is, but it's several years at least. (This week's podcast also addresses mixing new product with old, so there's a tie-in to that with this layout as well.) There were a couple of circle patterns that felt kind of watery to me as well as some stripes and subtle floral background pieces.  I also took a few minutes to pull some summer themed embellishments that I thought might work. I didn't really have anything specific in mind, but I wanted to have some things out handy to choose from as I worked. (Btw, I guess I should clean off my desk since I'm working in a super tiny space because it's so cluttered right now. haha!) 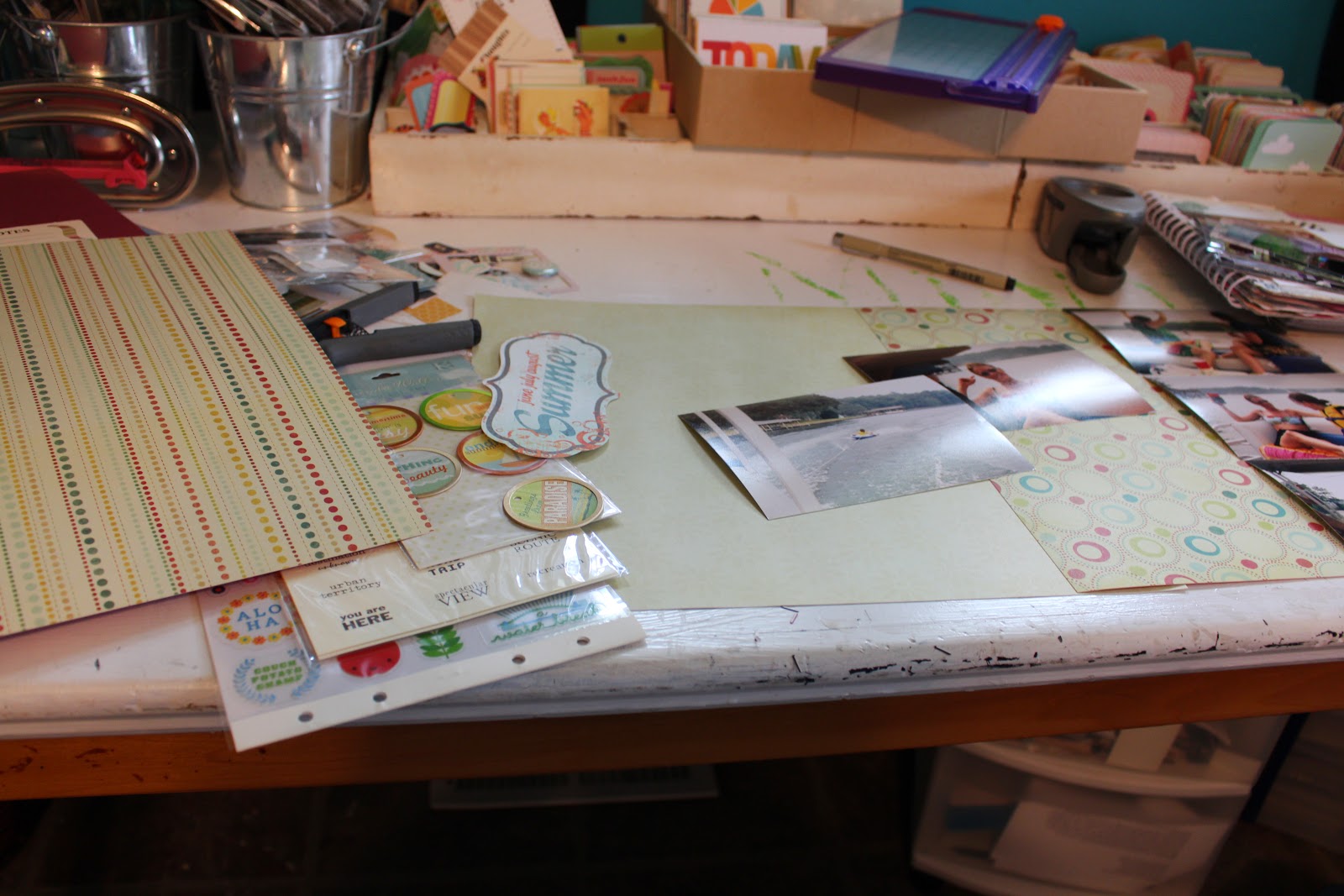 After arranging the pics on my paper according to the sketch, I needed to find something that would balance out the sides. On the sketch, those are vertical pics. Problem was that I didn't have any vertical pics from that boat trip. Immediately, I realized that PL cards would work there. I started with a couple of 4 X 6 cards but soon realized that I liked the idea of using 3 X 4 cards on the right hand side instead. The Summer line from Simple Stories worked well with the colors of the paper, so I chose that line as my 'embellishment' line. The small dot paper is part of the the same line as my background papers. 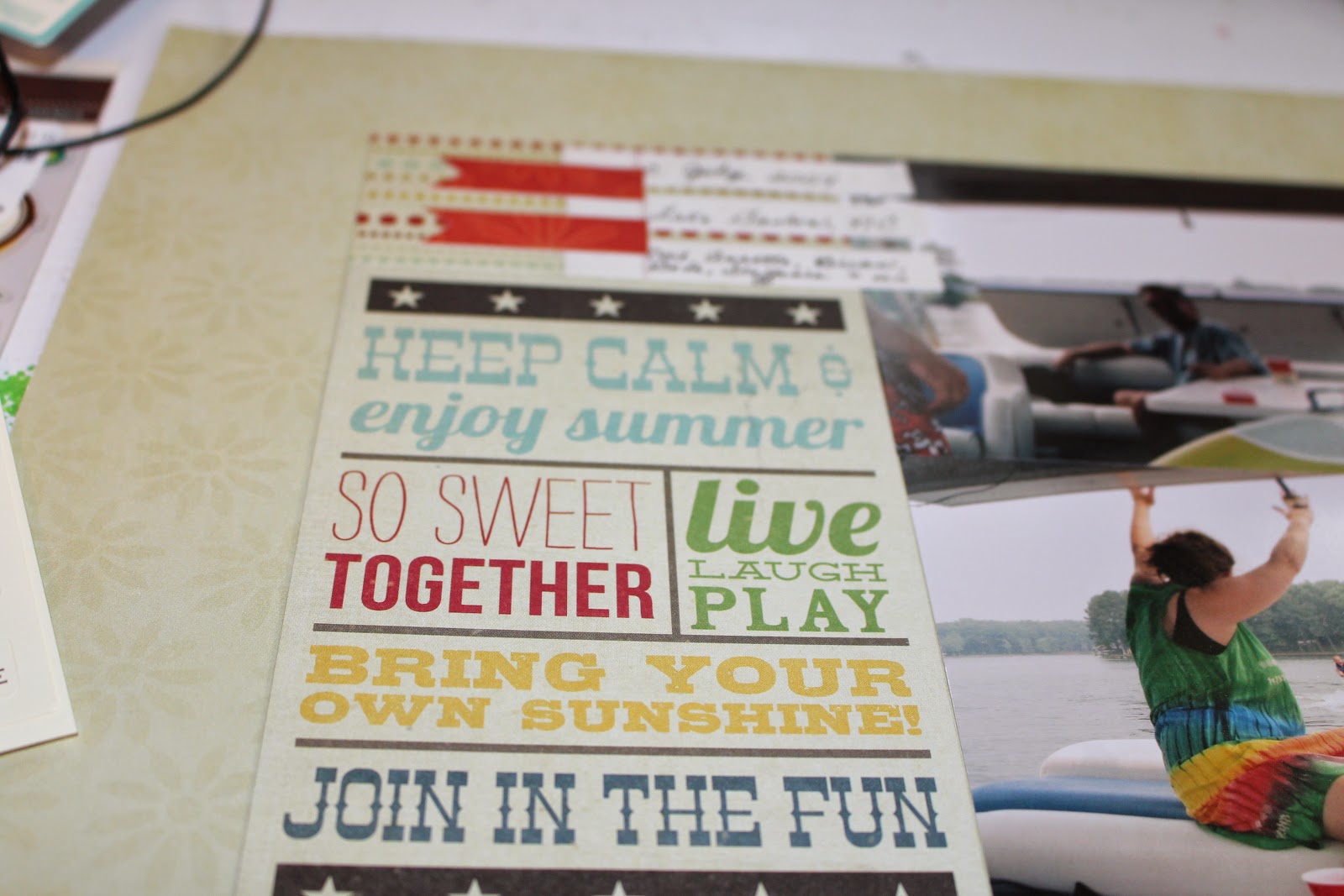 While I didn't have a lot of stuff to say about the event, I did want to include a few strips of journaling. Those strips were some scraps I had lying on my desk from a layout a couple of weeks ago. I moved my title to the other side of the layout from the sketch, so I did modify it some. The little title stickers are Jillibean Soup; the larger letters are old American Crafts. 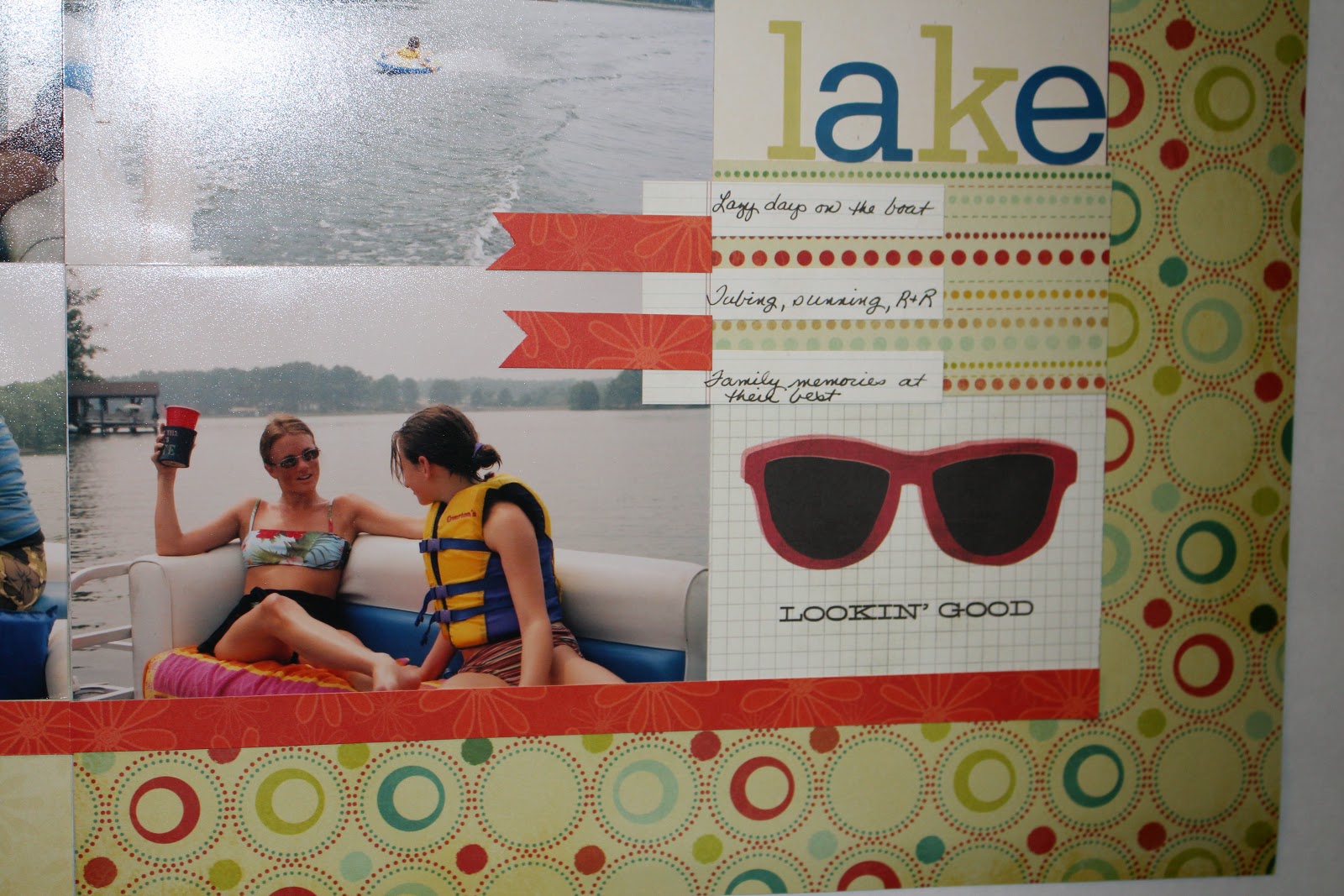 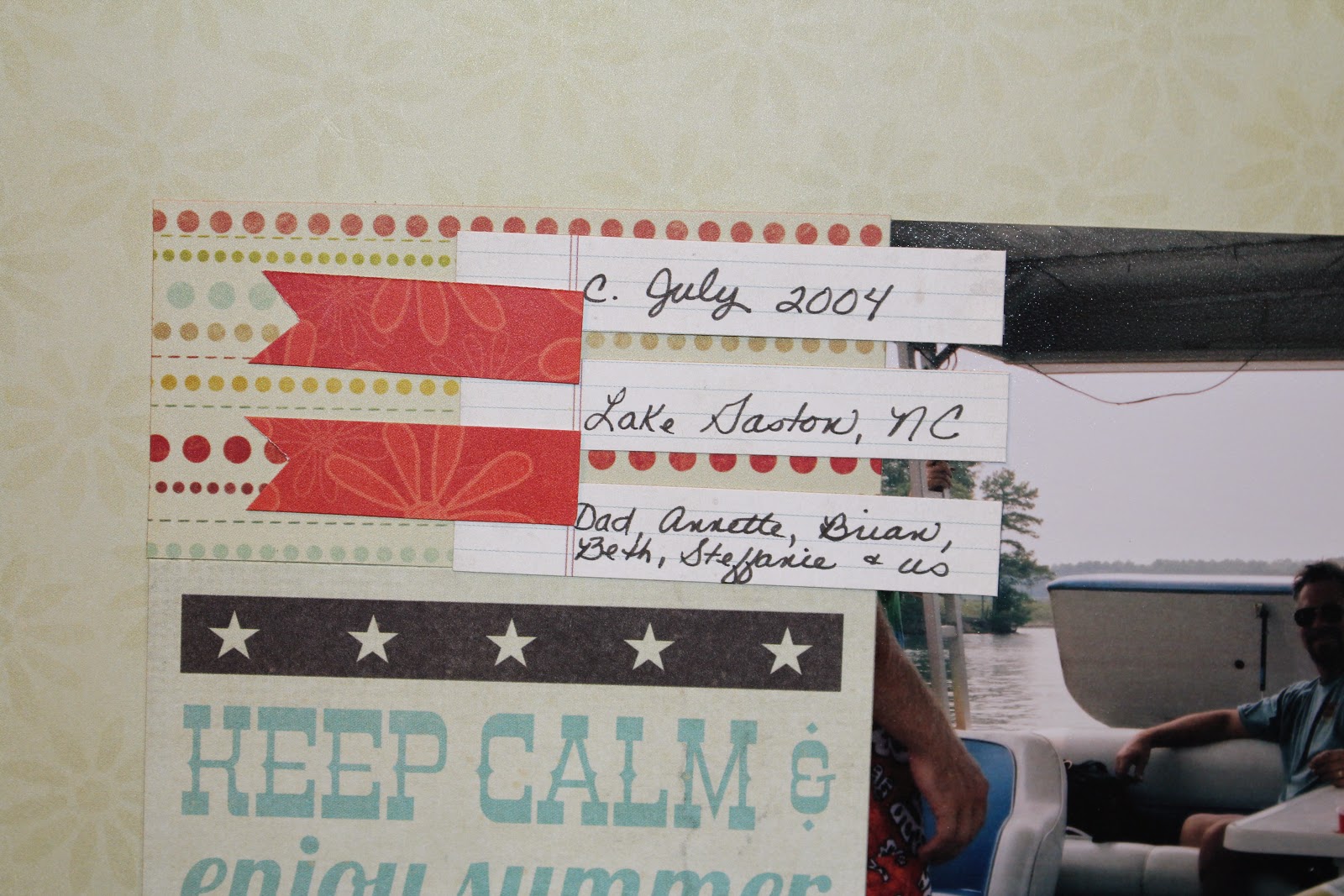 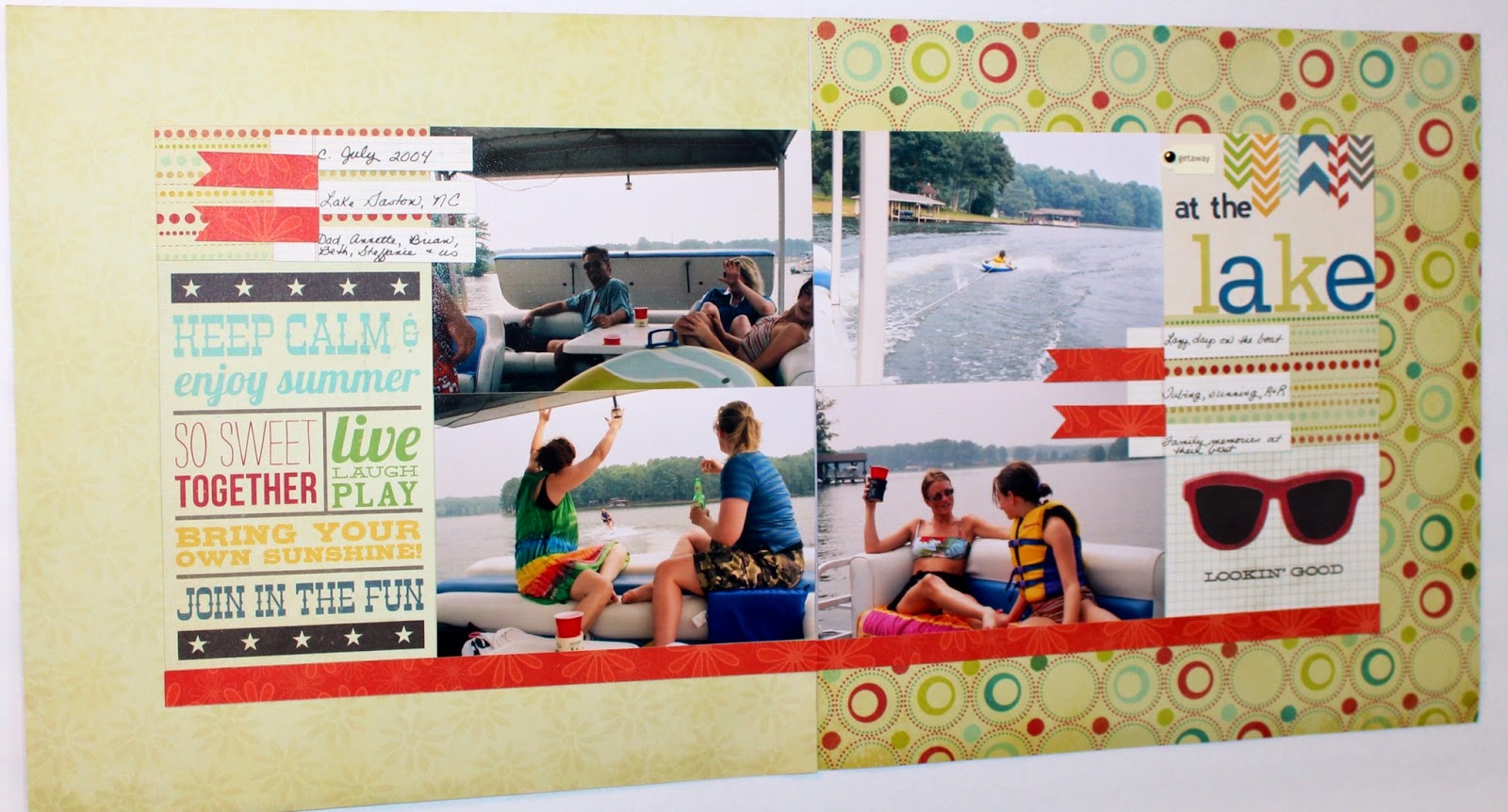 And the view from a few feet back...  (sorry for the glare) 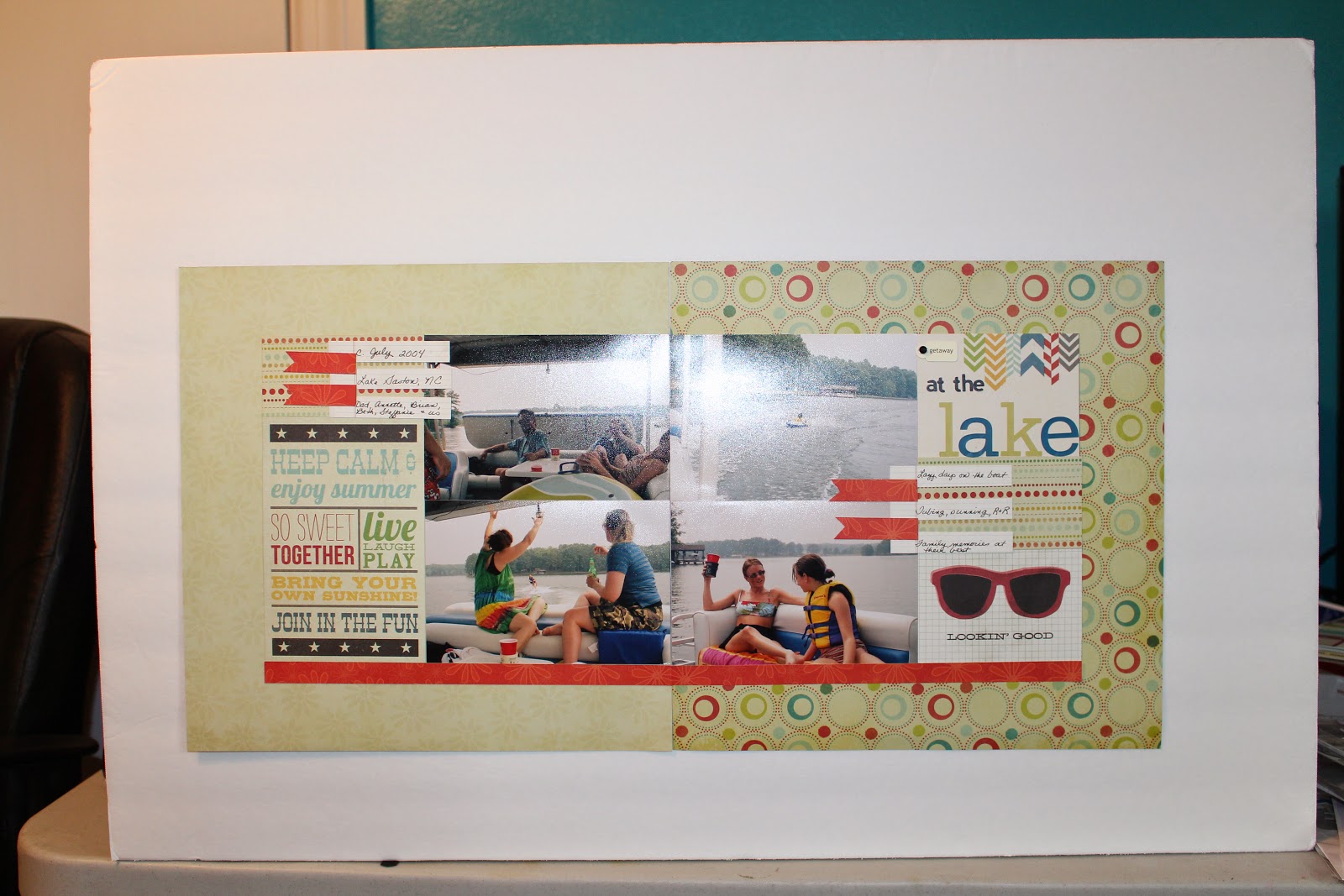 Hope you have a chance to listen to our podcast and to do some event based scrapbooking of your own. Thanks for stopping by - now go and be crafty!
Posted by Tiffany Lowder at 12:00 PM