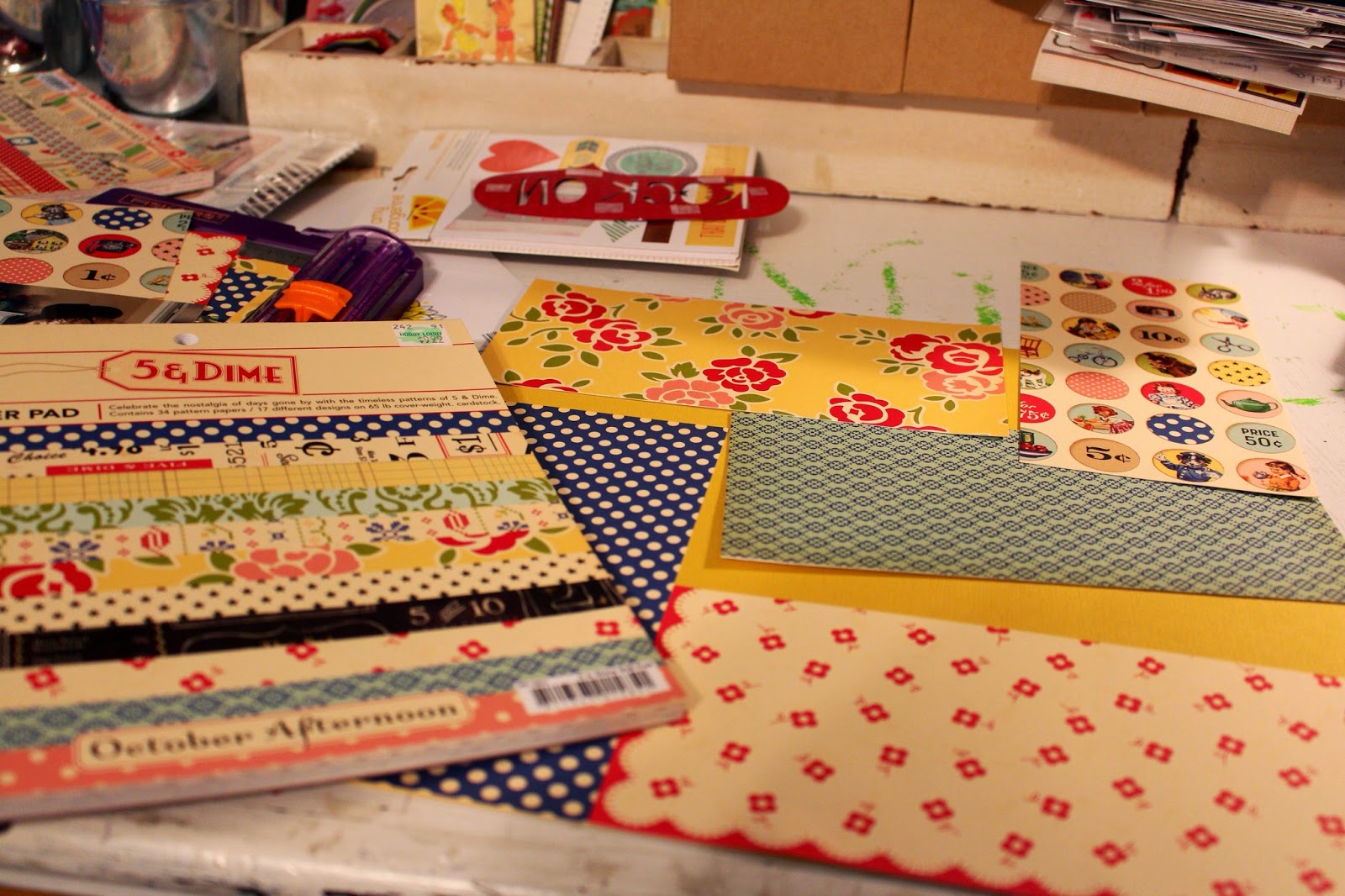 I had this collection of pics that told a story I wanted to scrapbook, so I started with those. These are pics of  a time this summer that I babysat a friend's grandchildren. The pics are bright and crisp with a bit of a vintage vibe, so I wanted paper that would pick up on that. I went to my paper pads and pulled a couple of October Afternoon pads. That's my fave line of paper, and I knew the pattern mix would be fabulous.

Flipping through both pads, I tore out pages that I felt would fit with the colors and scope of the layout. I think I started with about 6 of them although I didn't use them all.  I didn't want to do a traditional grid of paper, but I knew I wanted to use uniform sizes, so I cut each 8X8 piece into a 4X8 strip. I filed away the leftovers but kept one strip of each color at my desk. 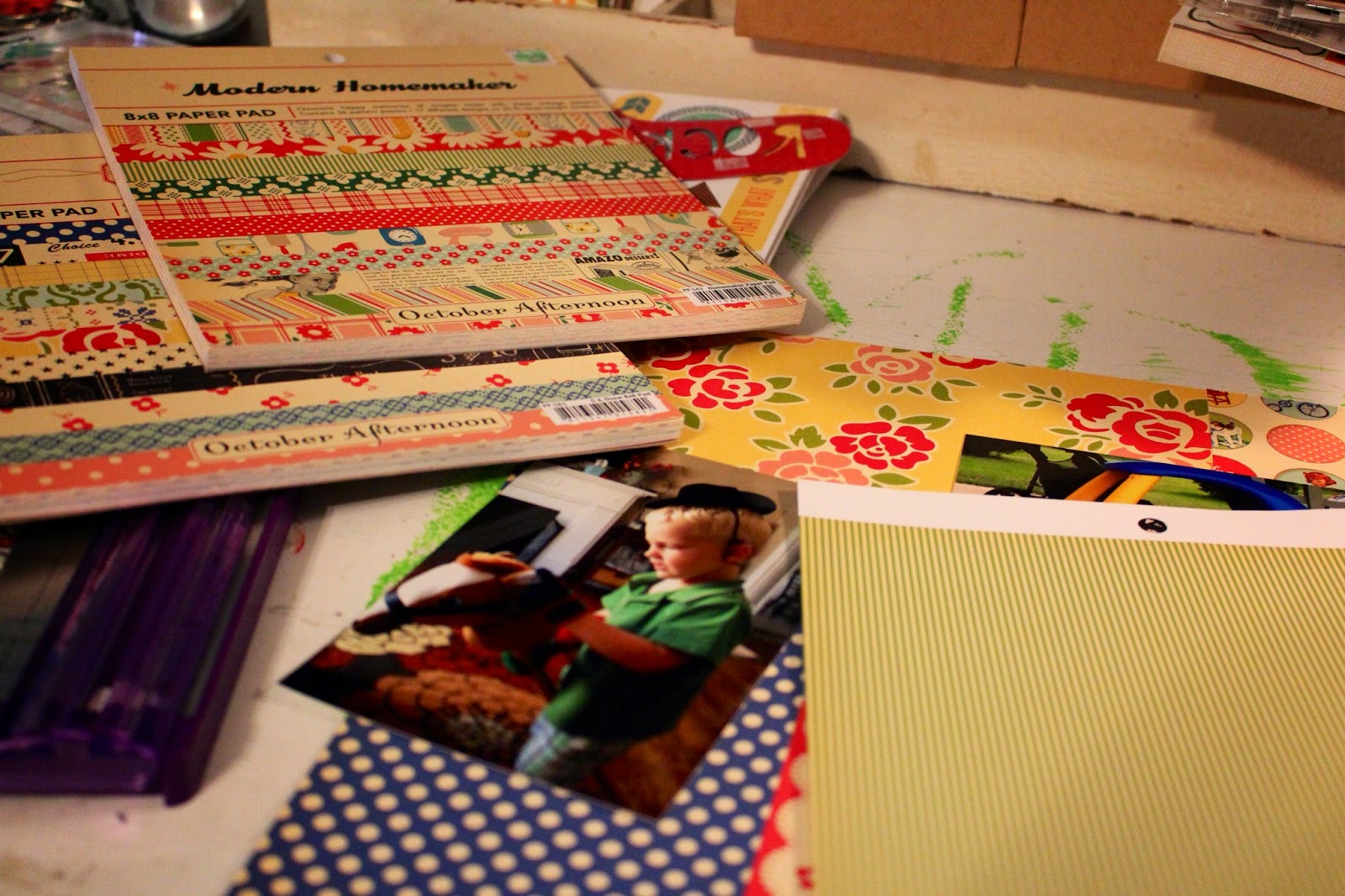 As I worked, I knew I wanted a mix of patterns - dots, floral, geometric, stripe, etc. - and that I wanted to vary the size of the pattern so that nothing too similar touched each other.  Once I'd arranged the papers on my background piece and adhered them, I decided that I needed a mat for the photo or it might appear to be floating. I used a full-size sheet of green pinstripe for the mat because each photo had some green in it. I wanted that to ground the photos and give the eye a place to rest. 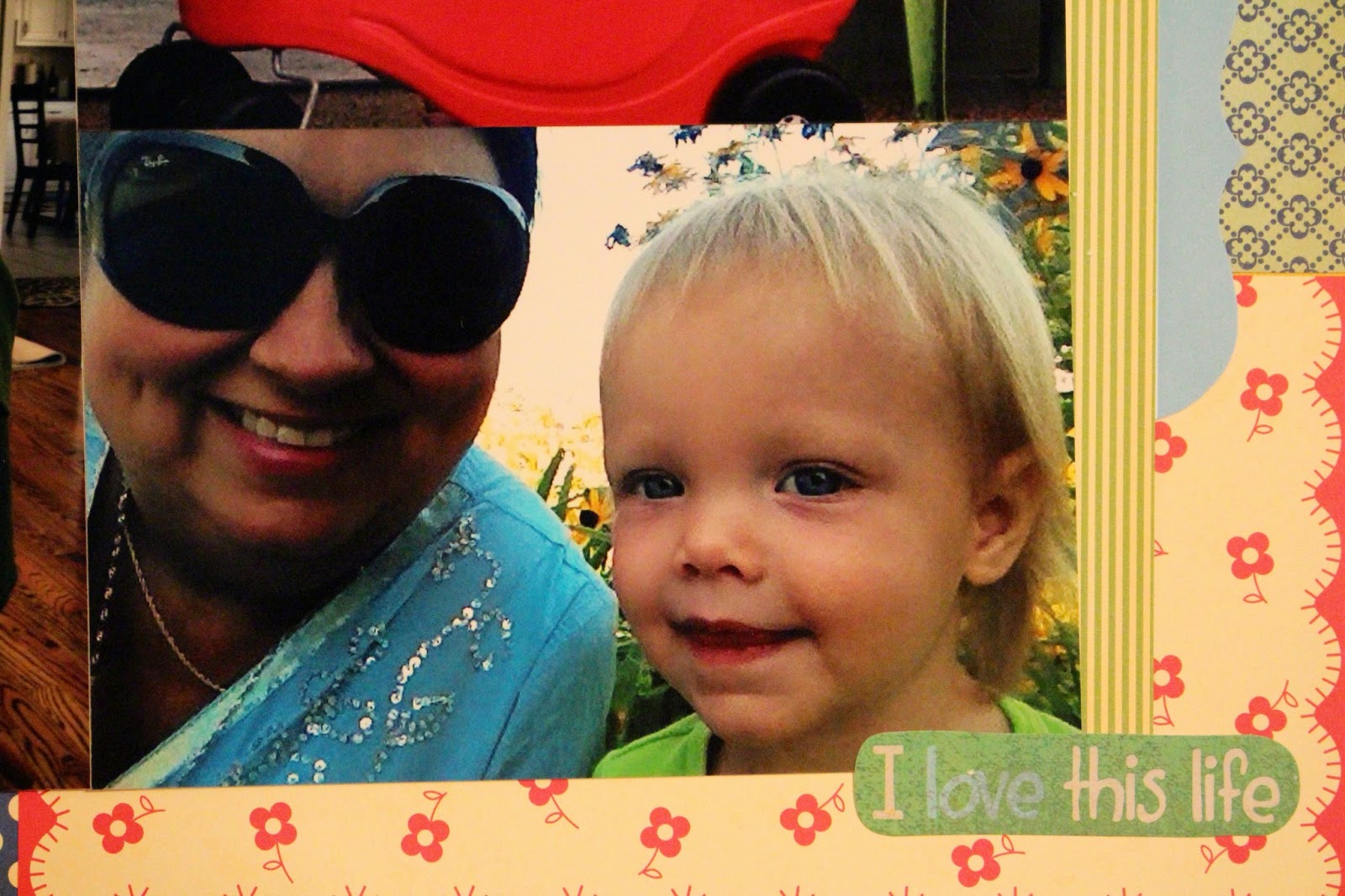 Since I love OA, I had several embellishment pieces that matched those lines. I went with the card showing the little boy holding a flat and added an Echo Park sticker to it. Maybe you'd think the title reads "Parade of Memories" or maybe you think it's "you make me smile." Idk which it is because I didn't really even think about it. I just liked the color combo. (I'm not somebody who gets hung up on titles much.) I did pop up the title card to give it a little more oomph! 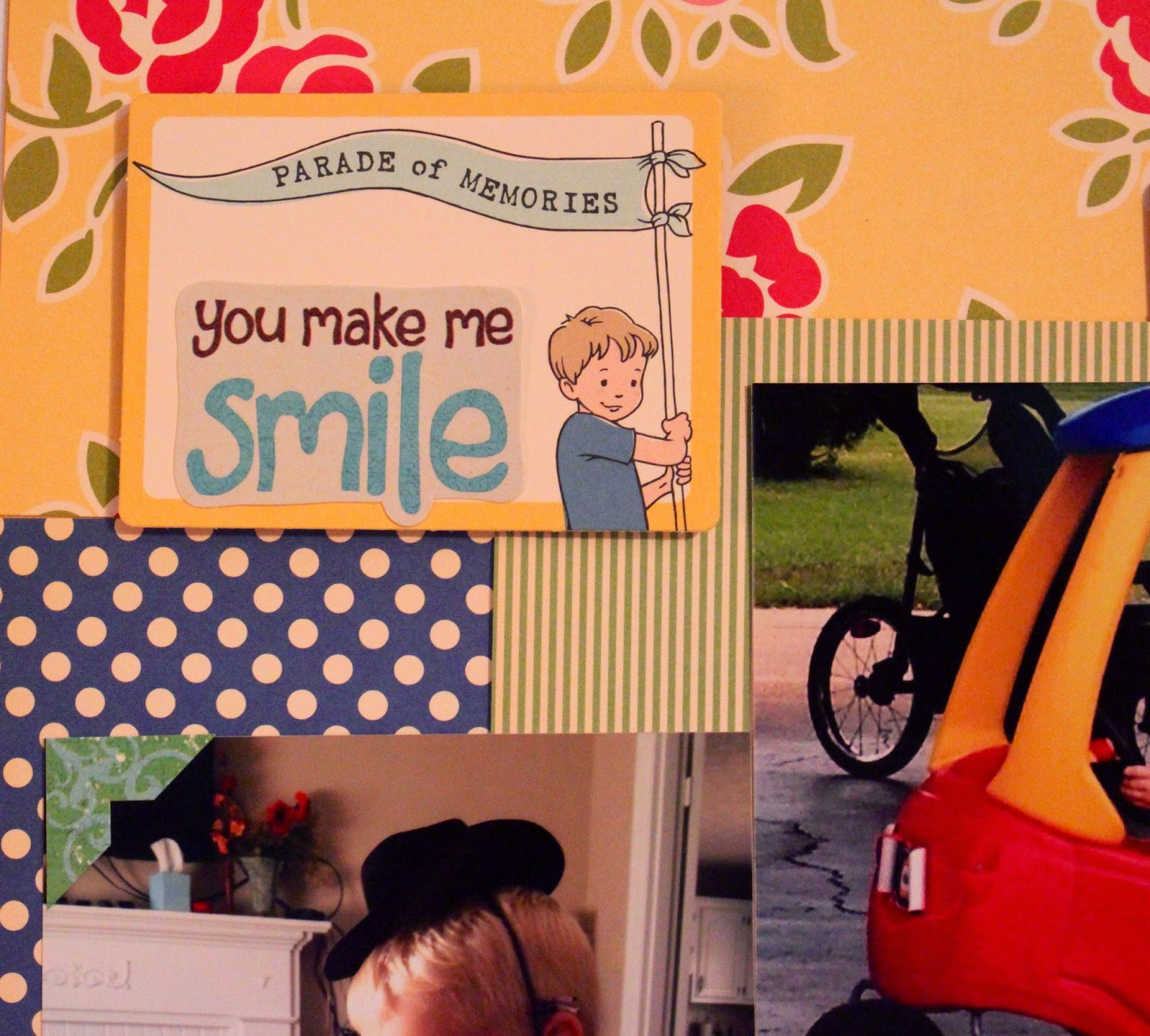 There needed to be a place for a little journaling, but there's already a lot going on in this layout. For that reason, I decided to tuck the journaling card behind the photo block. This allowed me to introduce another pattern via an OA card and it plays on the babysitting angle since the "once upon a time" portion sticks out at the top.  Notice that I only used a small bit of the circular paper. While it's my favorite from that paper pad, that's a lot going on in that tiny portion of print. When I tried to use a larger piece of that paper, it overwhelmed the photos/layout. 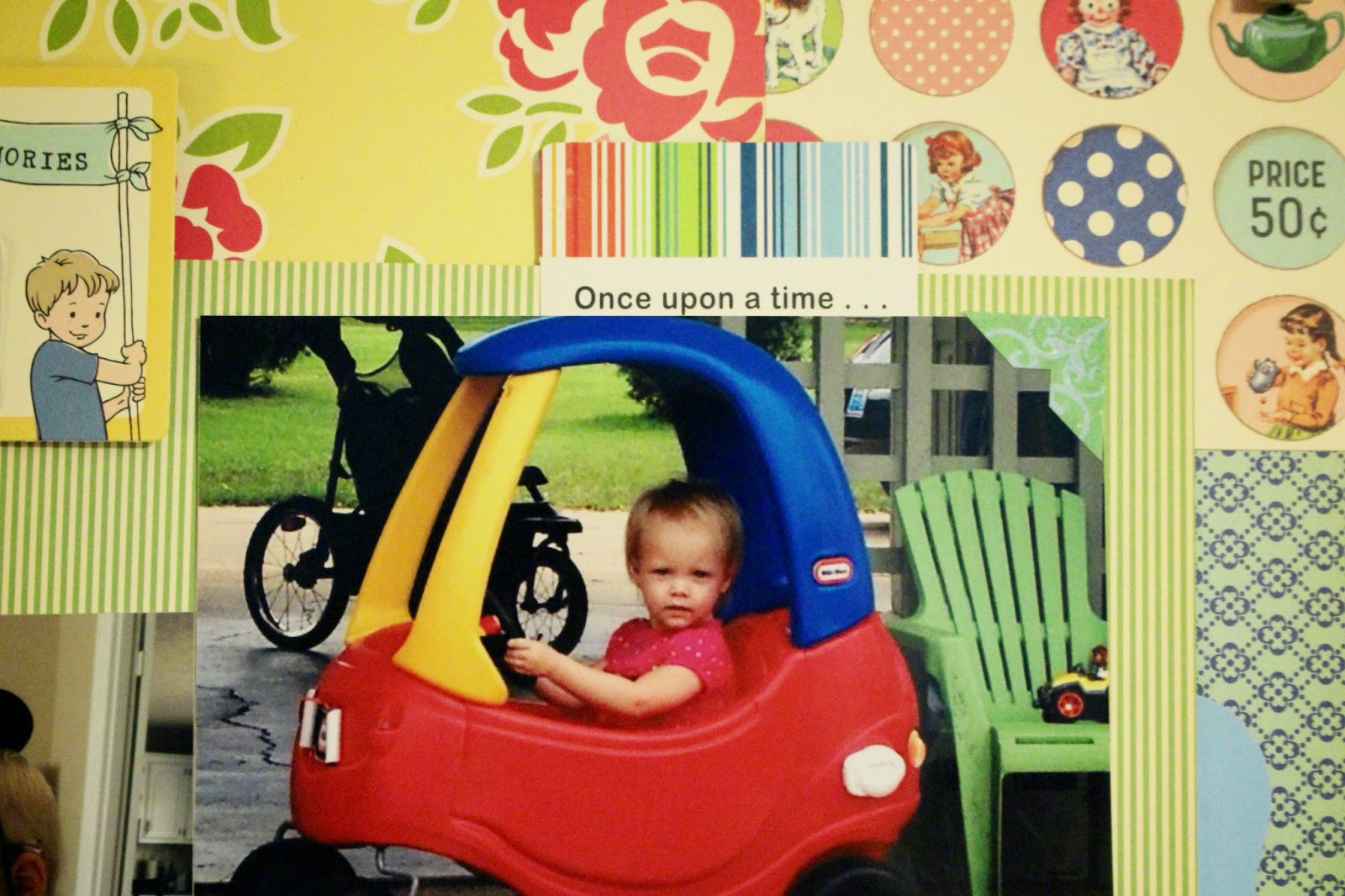 Because there were so many patterns going on, I bumped the pics up right next to each other to create a block of photos rather than leaving them to float on top of all the patterns. The layout felt a little top heavy, so I tried to balance that out by added a card with a fancy edge on the right side behind the photo mat. I didn't write on it or anything; I just used it to add some visual interest/weight to that side of the layout. For the same reason, I also added photo corners to the vertical pic and a sticker to the bottom right side of the photo grid. Working that visual triangle again and managing to balance the layout at the same time - yes! 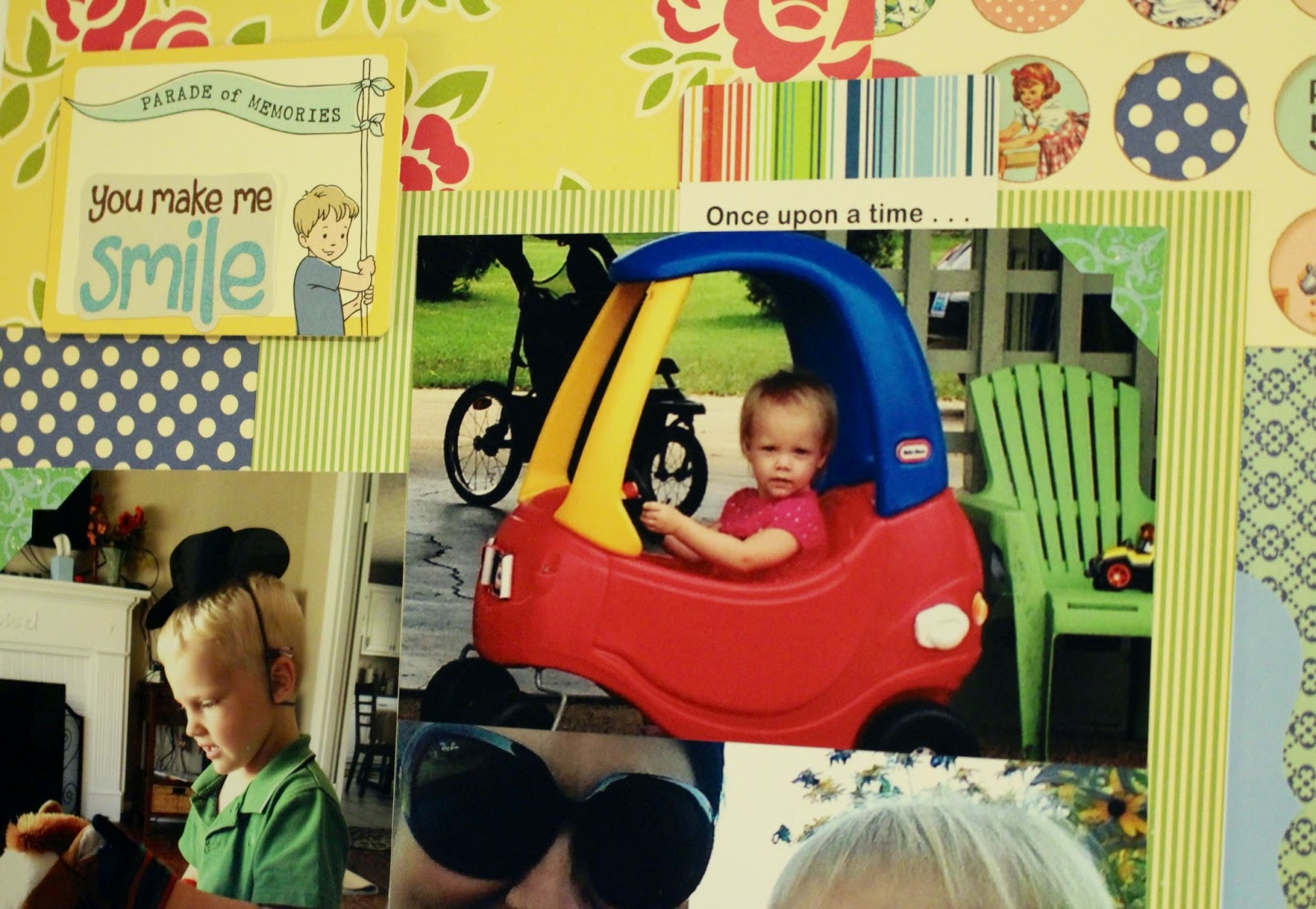 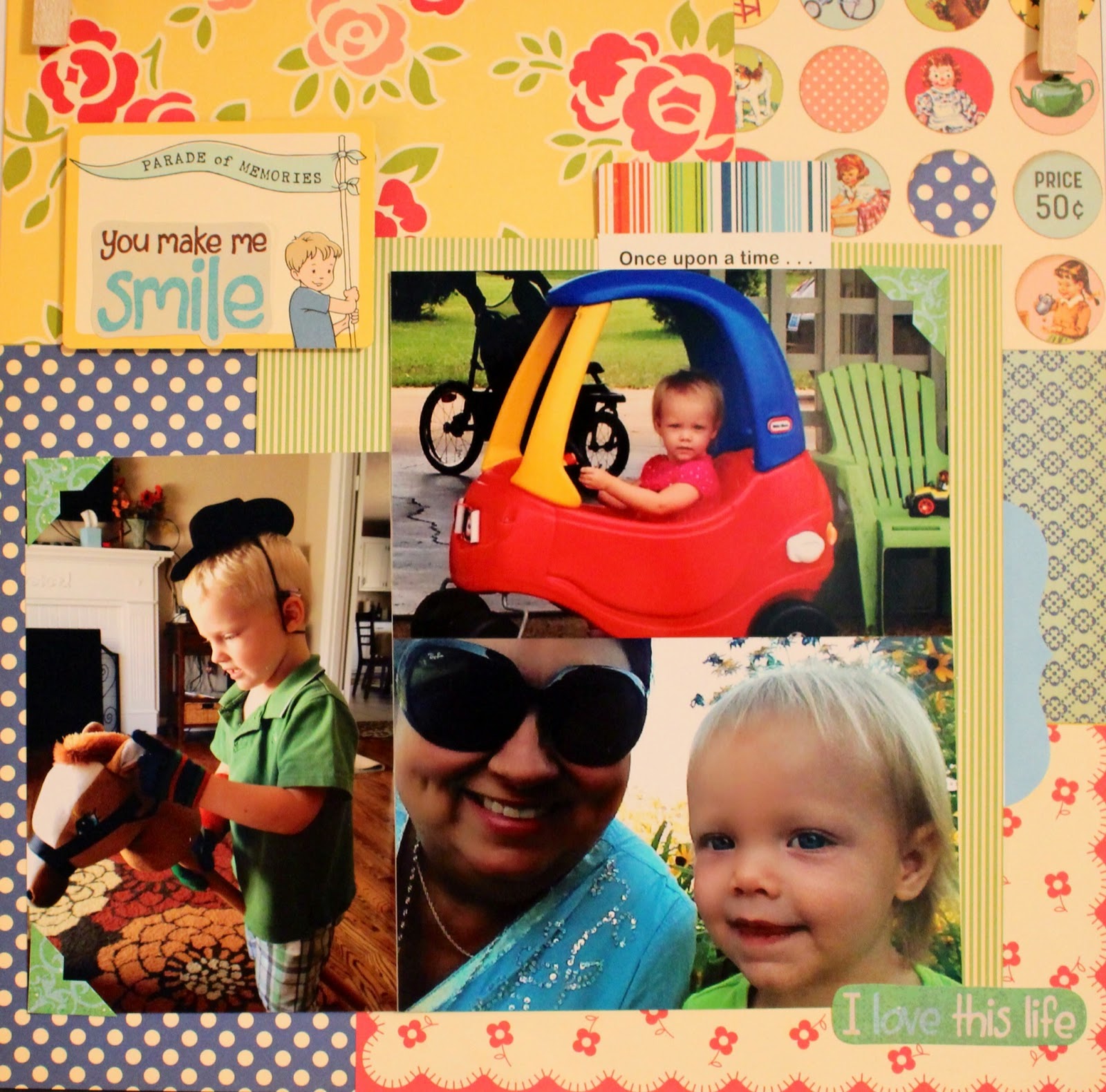 Takeaway:  The playful vintage feel of the OA papers allowed me to mix two of their paper lines along with product from EP and keep it all feeling cohesive. I'm really happy with the finished product here. Patterned paper just makes me feel good!
Posted by Tiffany Lowder at 12:00 AM