Sharing a layout - love photos but have nothing to say 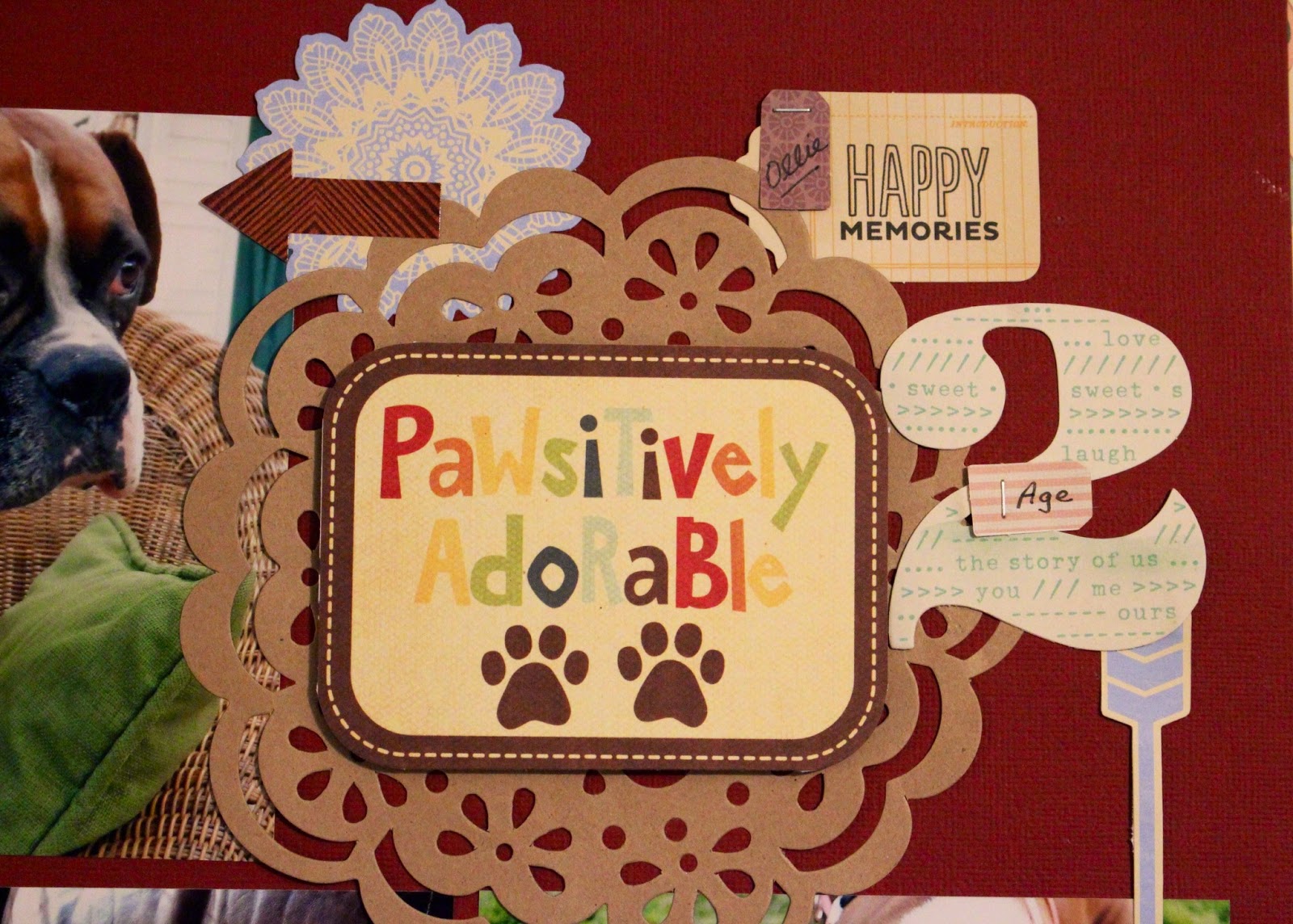 Sometimes, I have some great pics I'd like to scrapbook, but I don't have anything profound to say about them. What do I do in that situation? Well, I scrapbook them and don't worry about saying much. Sometimes the who/what/when is plenty to include on a layout. 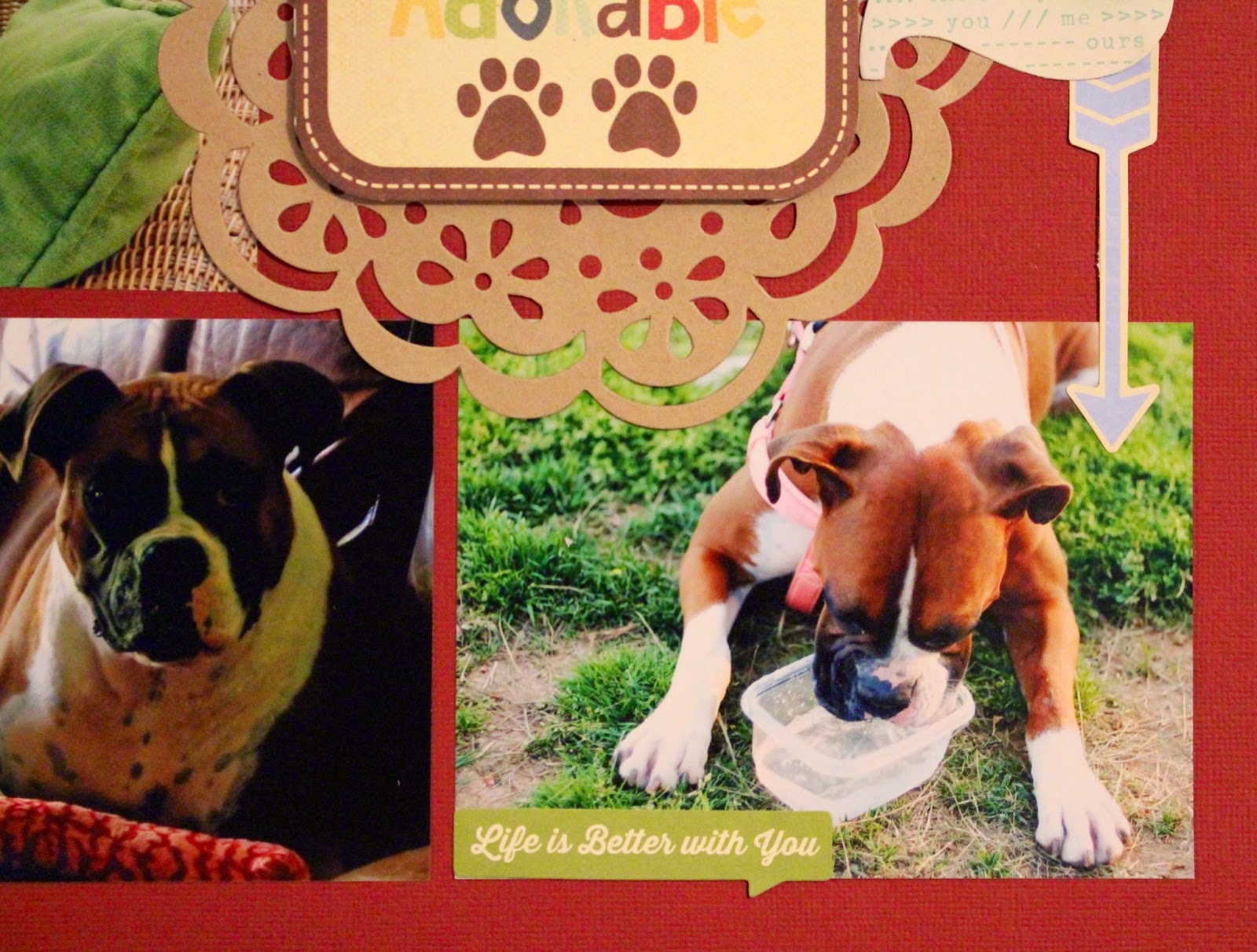 In this case, I had a few cute pics of my granddog, Ollie.  She comes and hangs out with me pretty regularly, so I snap pics of her randomly. While she hasn't always been good, she's turned into the sweetest big dog ever. I never would have thought it when she was chewing up the millwork in my house, but I love this big lug. 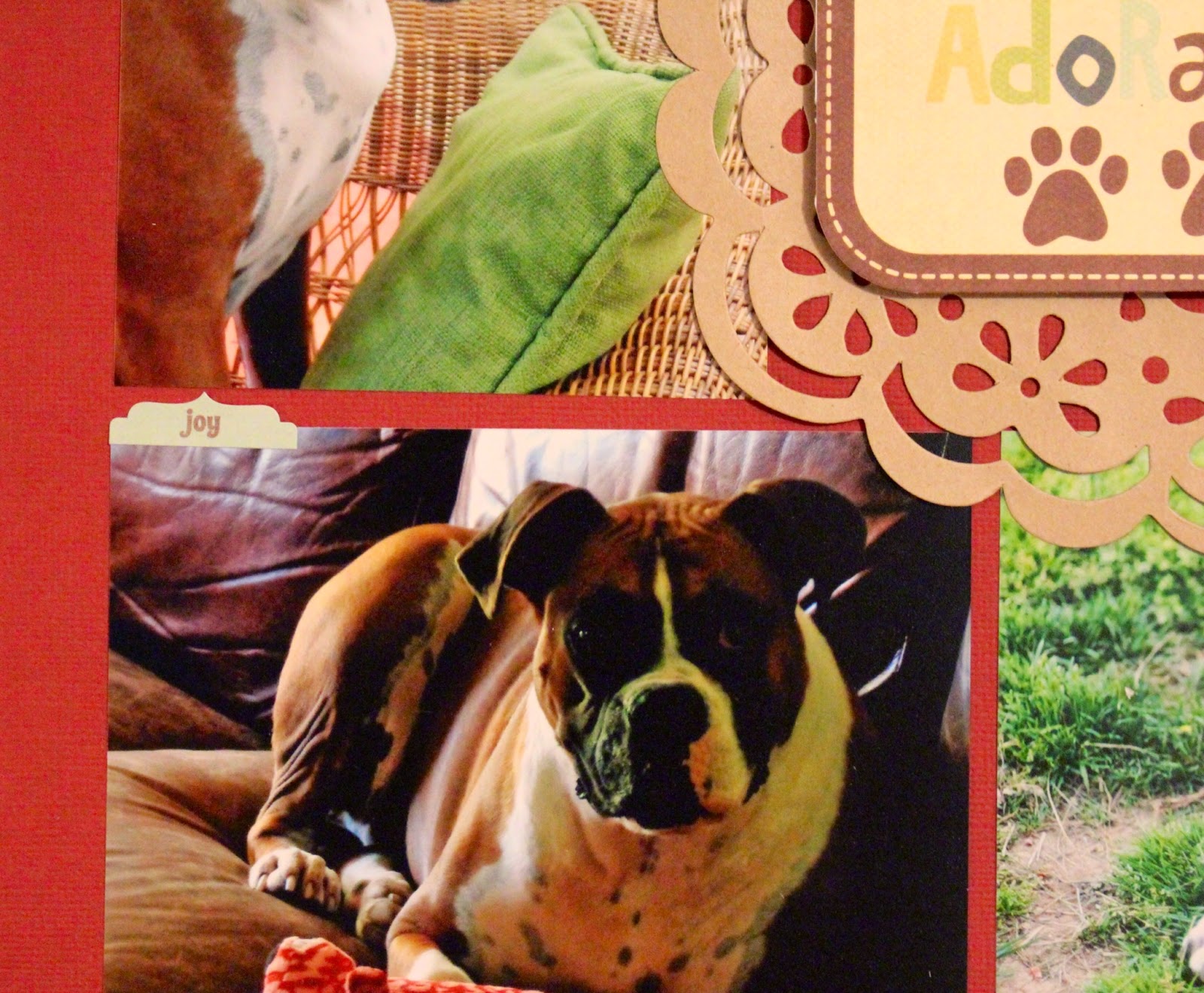 Since I have dogs of my own, I have a tendency to collect pet themed products. I started with the PL style pet card as my title and worked from there. I chose cardstock as the background because I wanted to keep things clean and simple; the color of the dog, the couch, and the toy in the pic made me go with a brick red. I thought it was a nice foil to the green of the grass and the pillow.

That kraft doily is a new purchase, and I like how it grounds the title block and the embellishments that I used to surround it.  By having the doily touch the edges of all three pics, I think it creates a sense of unity. I played on the green and blue elements in the title block by choosing small embellishments in those colors. By including an arrow on the top left photo, a small tag on the bottom left photo,  and a strip on the bottom right photo, I also created a visual triangle of embellishments. 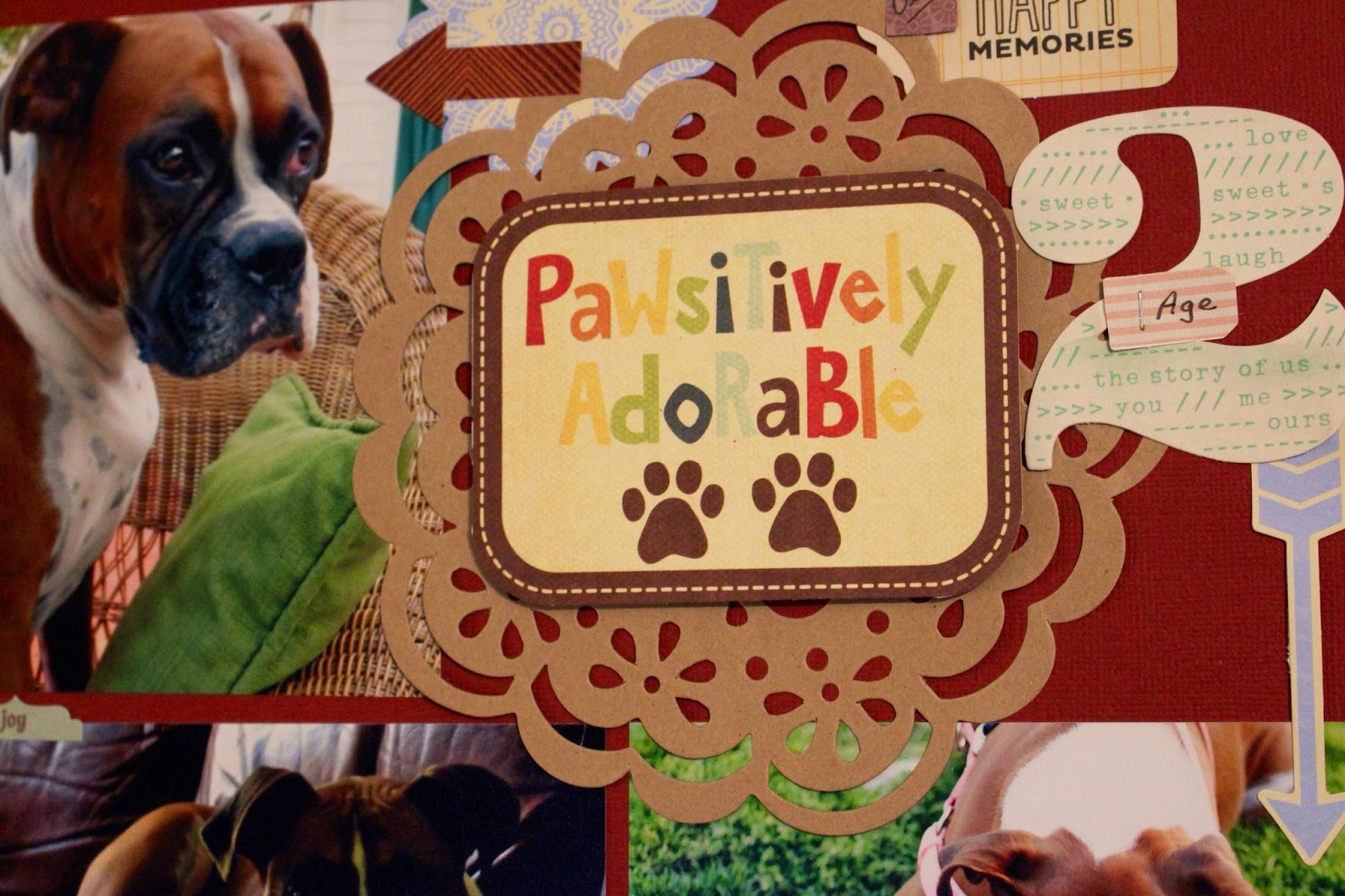 I think the overall look is clean and simple, even though I managed to incorporate some yummy product. 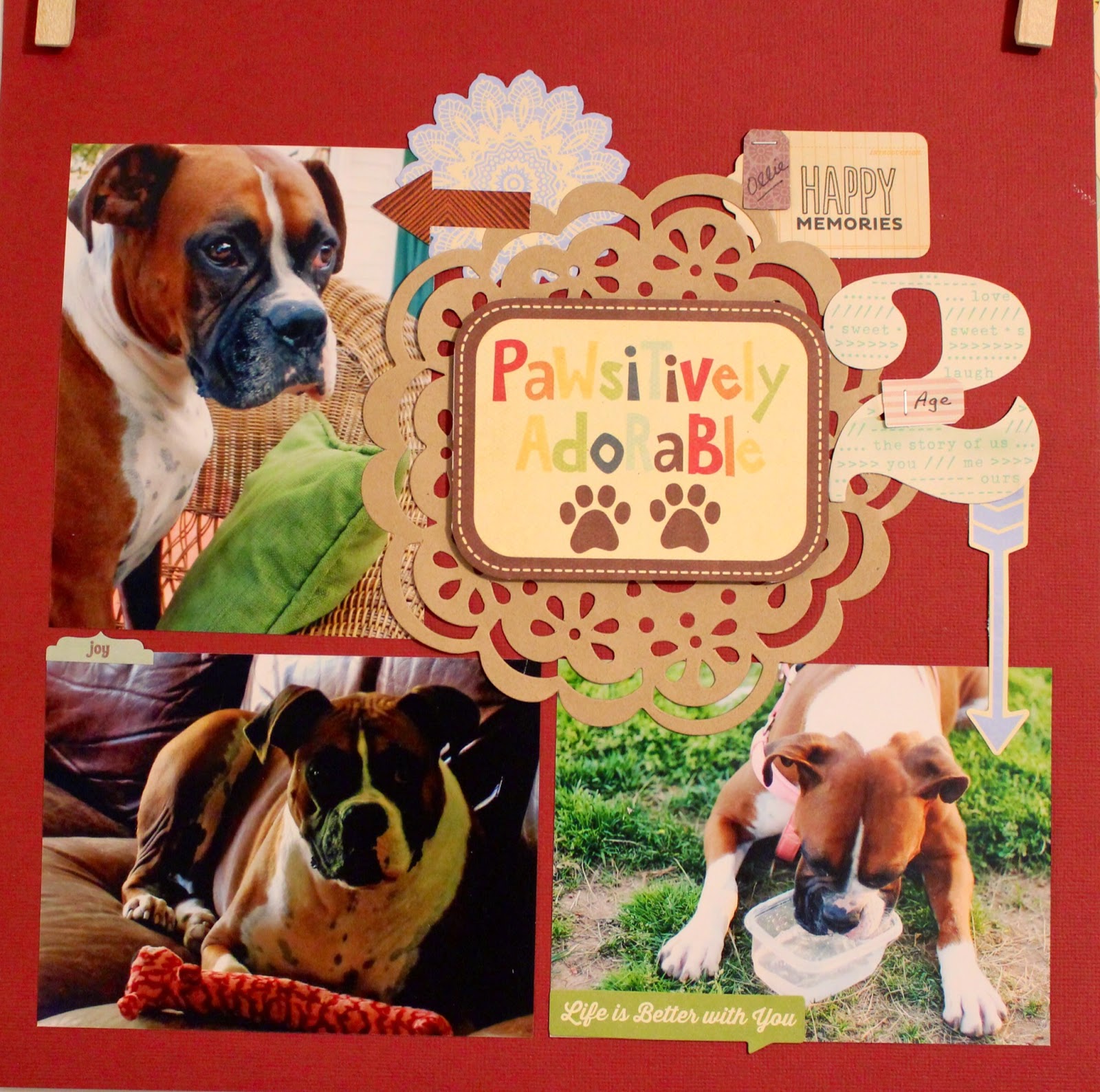 I encourage you to go out and scrapbook some pics that you love, even if you don't have a big story to tell about them. Sometimes it's okay to just scrapbook because the products and pics are pretty. :)
Posted by Tiffany Lowder at 12:30 AM