Rather than make another traditional December Daily project this year, I decided to try something a little bit different. I thought it might be fun to tell a series of stories about Christmases from when I was growing up. I'd never scrapbooked any of these stories before, so having them in a single location seemed like an interesting variation of the DD project that so many people make. I'm calling my project "Decembers to Remember" and plan to tell 31 stories about the holidays leading up to my senior year of high school. Hopefully, these stories will be a great way for me to share my childhood and my family's holiday traditions with my daughter and maybe even her children someday.

One of the things that was always challenging to me about December Daily was working on the project every single day and feeling guilty if I got behind on it. My variation of the project completely removes that sense of time guilt. I've only told seven stories, and it's already December 14. I guess that I'm a week behind schedule technically, but I don't really see it that way at all. I like being able to work on it a couple times a week and seeing real progress without feeling worried that I won't "catch up."

My process was pretty simple. First, I made a list of stories that I might want to tell from the holidays during my childhood. Next, I scanned, edited, and printed the old family photos I was able to locate that seemed to match the season, event, or age of each story I'd listed. Even though the picture quality isn't fabulous, I'm grateful to have located as many of them as I did. I edited them as best I could, but some are still a bit dark and blurry, and others just have wonky colors that couldn't totally be corrected. Of course, I had some missing photo spots; I looked for online photos to fill in the gaps of pictures I couldn't locate. The next step was to print those photos in different sizes. I did this randomly because that's how I roll. I don't really like dealing with photos and printing, but this process wasn't too stressful since I worked on it a few different days rather than all at once.

I thought I had an album already to use for this project, but I was wrong. After picking up a plain kraft 6 X 8 album at Hobby Lobby and some page protectors, I started laying out the order of the pages. I didn't want to have the same kind of page protector right after each other in the album. Then, I started matching the photos I had printed with the page protector formats in the album. It was all pretty random and fluid, but I was enjoying the process. At that point, I separated all of my Christmas supplies into a basket I could keep on my desk and began matching up printed paper with the photos. The paper and photos became place holders in the album and could be moved around if needed.

On Monday of this week, I actually made the pages for the first two stories in my album in just under two hours.  I'm printing out the journaling, and this adds quite a bit of time to the overall time it takes me to make a layout. While I don't prefer this approach, I think it allows me to tell much longer stories than if I were using my handwriting.  I also worked on my album on Wednesday and completed a couple more pages in another couple of hours. Tonight, I told three stories in less than two hours; that means my speed is improving.  Take a look at the pages I made, and perhaps you'll be inspired to tell some of your own childhood stories. 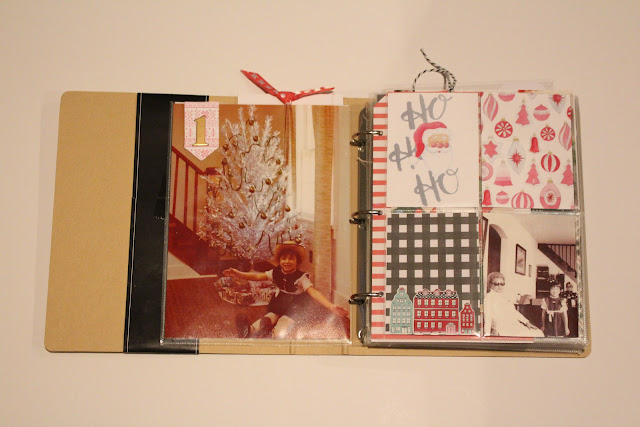 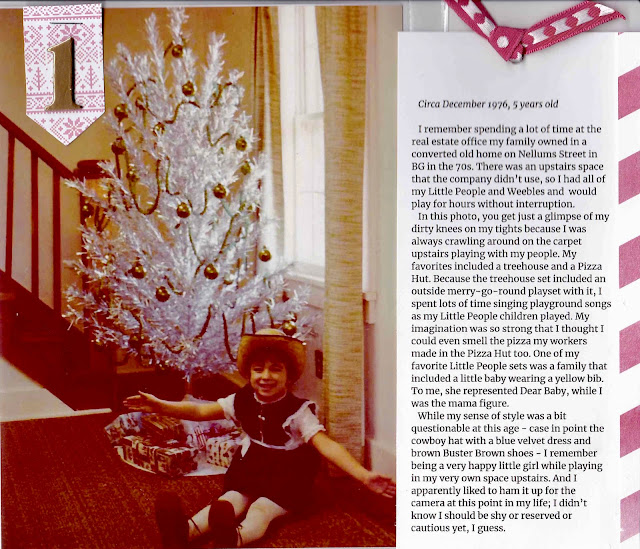 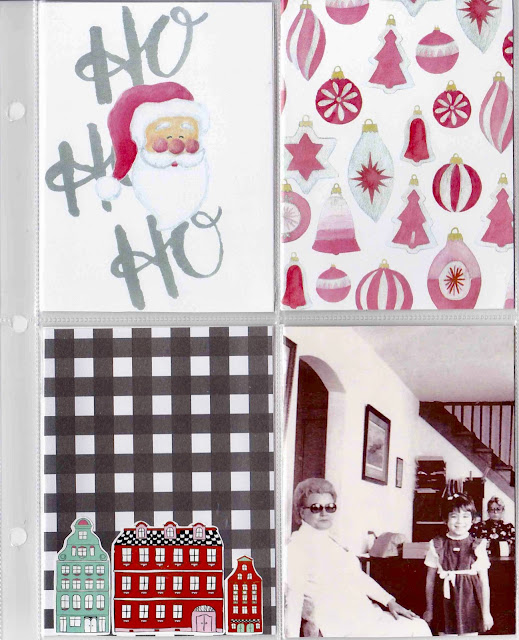 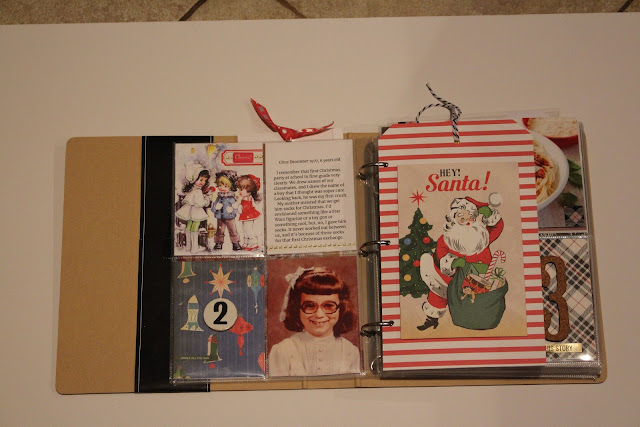 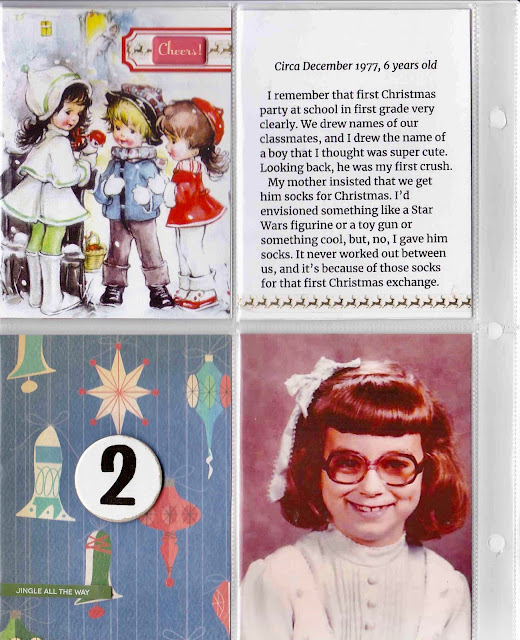 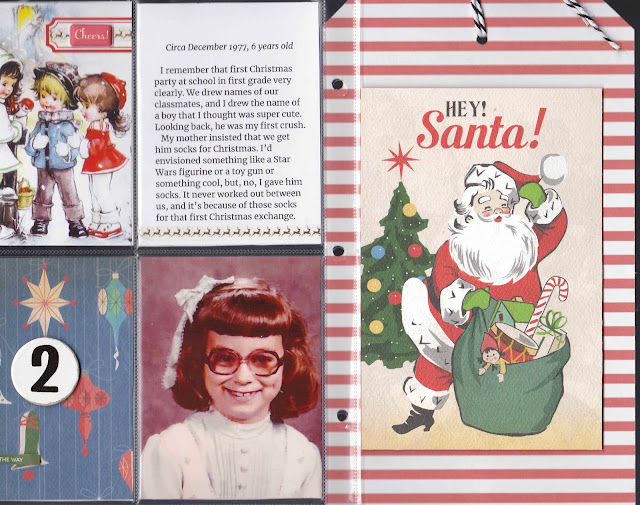 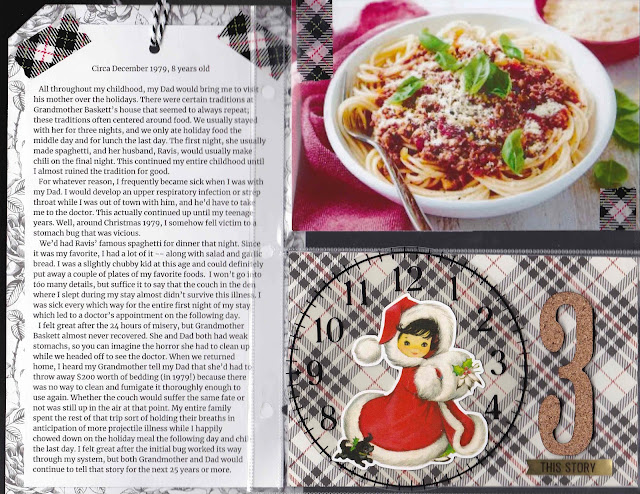 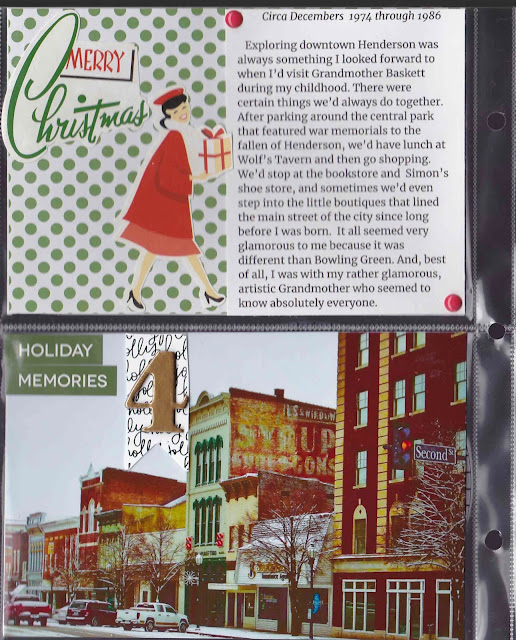 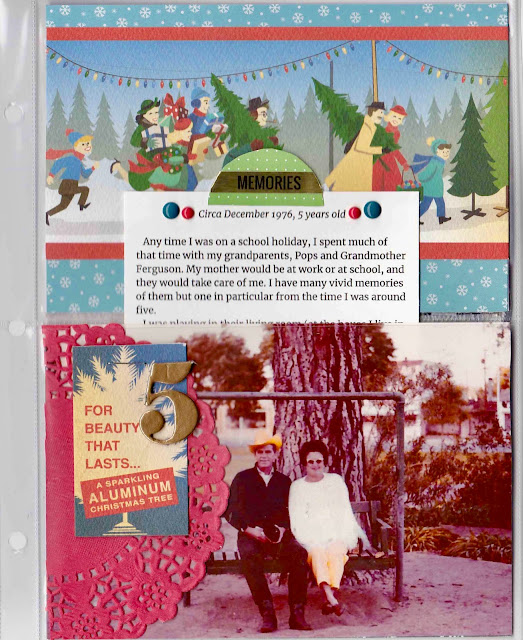 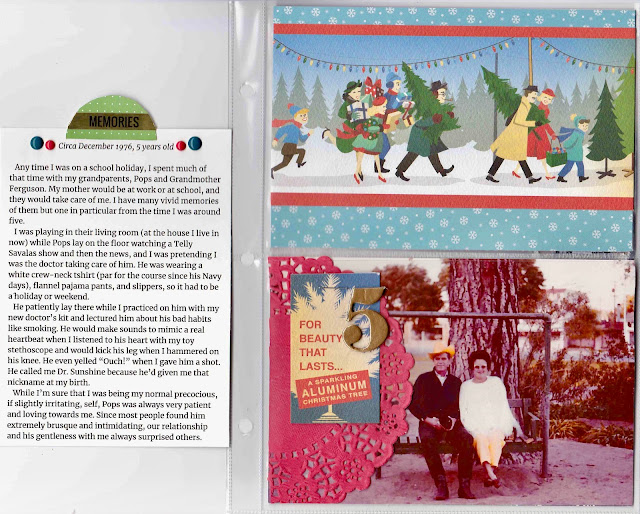 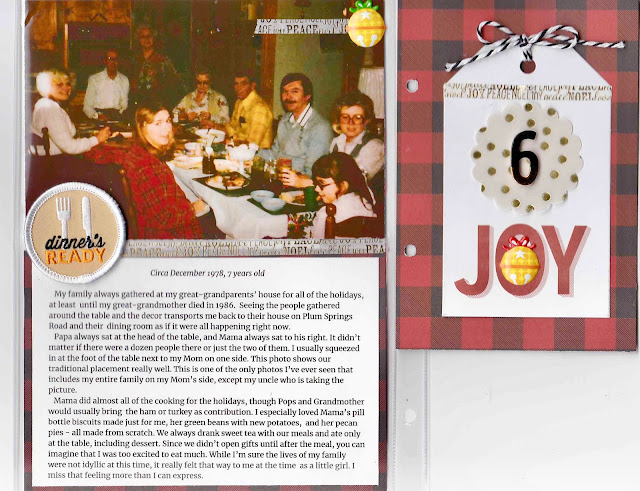 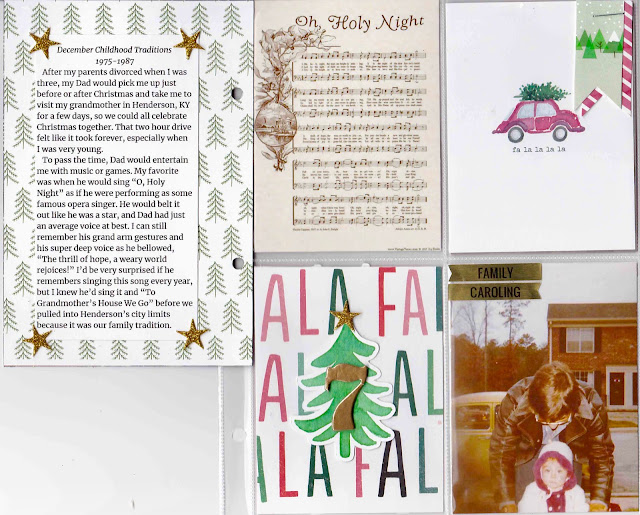 I'm really loving this project and am already looking forward to telling more of the stories.  Now, I'm wondering why I took so long to make such an important album from my childhood.
Posted by Tiffany Lowder at 7:53 PM