About a month and a half ago, I caved to what can only be described as scrappy peer pressure and snagged a Big Happy Memory Planner boxed kit at Michael's. With a coupon and my teacher discount, I think I paid about $17 for it total. I totally blame it on the cute video that Tracie Claiborne made on her YouTube channel and on the fabulous inspiration that Stephanie Howell has been sharing on Instagram. I'm not really a planner girl per se, but I like the idea of using a planner as a kind of Project Life style memory album.I did something similar in 2015 with a Heidi Swapp creative planner but fizzled out after a while. I also did sort of the same kind of memory-keeping in another Heidi Swapp planner album for my 2015 solo trip to Paris, and my monthly TNs from Cocoa Daisy throughout 2016 could arguably fit the same kind of category. When I saw all of the darling planners out there and the inspiration that began to filter into my IG feed, I just couldn't hold back any longer. I resisted buying any of the little sticker books at first, but in the past six weeks, I managed to buy two older ones on clearance and one new one. I also received one of the new sticker packs for my birthday.

Here's the album that I scored a few weeks ago: 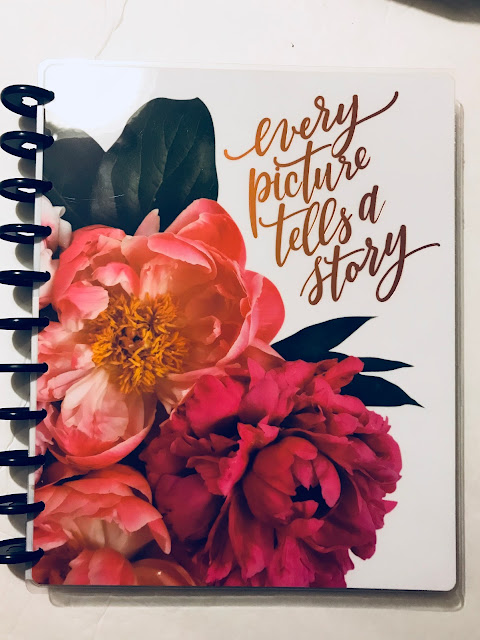 I mean, how fabulous is that giant floral cover? And the hand lettered title? And the quote on the front? It pretty much called to me from its place on the bottom shelf of an endcap at Michael's in my hometown.

Of course, I couldn't wait until January 2018 to start playing with it! Waiting for three months to start this fun project didn't sound like anything I cared to do, so I thought long and hard about how I could justify beginning a memory planner (in an annual format) at any point other than the beginning of the year. Sure enough, I found a way to rationalize it. Since my birthday is the first week of October, I thought it might be perfect to make this planner memory album about the year I am 46. (Just typing the number hurts a little, but this lovely floral memory planner seems to assuage some of the pain...) And there I had my rationale for starting an annual project in October rather than January. That's Lowder Logic right there, my friends.

As a happy coincidence, the fella surprised me with the fabulous HP Sprocket printer for my birthday the first week of October. I had put it on my Amazon wishlist because I thought it looked cool, but I had no idea it printed photos the right size for the memory planner I'd just bought. Plus, I didn't really think anybody would buy me that high-ticket item for my birthday. I'd put it on my Amazon list thinking that I might want to watch the price for after-Thanksgiving sales and treat myself to it then. How perfect that the fella bought it for me, right? Smart man that he is, he also bought a 50 pack of the photo paper so I could play with my new toy to my heart's content.

I took my new planner and my new printer to the ScrapGals retreat in Nashville that first weekend in October thinking that I might have a chance to work in it. Well, I did print out  a handful of pics to use in it while I was at the retreat, but I had zero chance to feel crafty in any way. I was too busy visiting with scrapbookers and teaching my class and helping make sure the event went smoothly. I mostly just thumbed through it a few times and imagined how I might fill up the pages.

It wasn't until this week that I sat down to actually make the first spread in my Happy Memory Planner, and I have to say that I'm smitten. It was so much fun to cut up pieces of paper I loved and adhere them into the planner. Printing tiny pics that turn into stickers is also pretty awesome. And getting to embellish my weekly spread with a few stickers from those books was really fun too. I enjoyed getting to write out a few stories from my week without a bunch of pressure to tell super meaningful stories; the whole tidbit aspect of this project really appeals to me.  Here's my first spread: 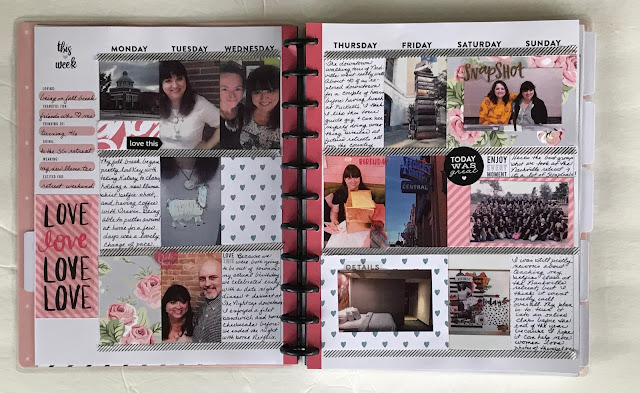 I'm already a few weeks behind since October is now over, but the ease of printing pics from my phone and working on this book a week at a time means that I'm not even feeling stressed about that. I hope to get on a schedule where I'm working just a couple of weeks behind and where I update my planner every weekend. Doesn't that sound like fun? Hopefully, you'll check back on my progress and maybe even feel inspired to try a similar project yourself. Happy memory planning!
Posted by Tiffany Lowder at 5:24 PM