Tough month for the pups 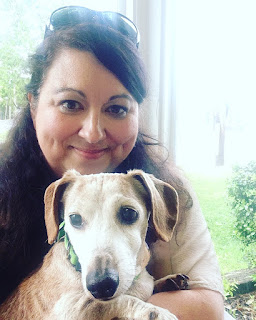 Lowder-dog has had a tough month, and he's still not back in top shape just yet. He spent a night at the vet's office earlier this month because of vomiting, diarrhea, and dehydration. I took that top pic while we were waiting for the vet to decide whether to keep him overnight or not. 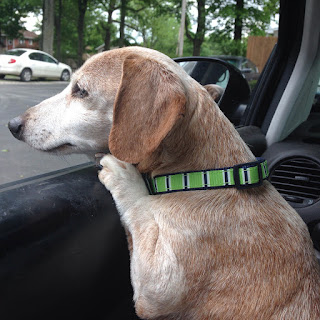 I snapped this photo the next day when I picked him up to take him home. He was definitely glad to go home. 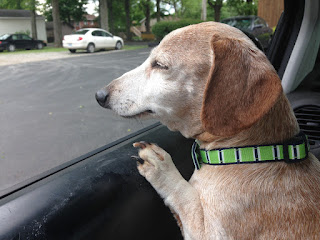 But he was still pretty drugged up. I think he looks a little like Snoop Dogg after a doobie in this photo. Haha! 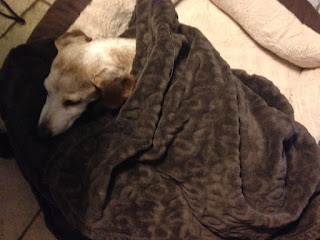 He spent several days pretty much cuddled up in a blanket in  his bed and not eating. These days, he's still not back to his old self just yet, and this mama is pretty worried about my upcoming six week trip and leaving her boy. 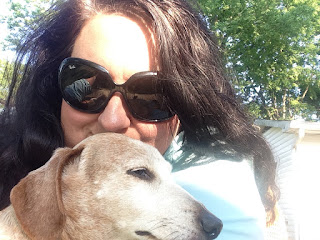 You can tell by Lowder-dog's little eyes that he still isn't feeling great. I take him out onto the deck in the afternoon some, but he doesn't spend much time outside anymore. He still goes outside to the bathroom (mostly), but he doesn't really explore and roam around anymore. I'm not sure if that's because he's not seeing well anymore because of his cataracts or if it's because he doesn't feel well. 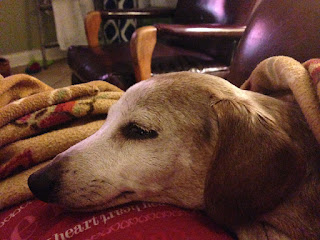 He's basically just sleeping a lot these days. His appetite still hasn't returned, and we've been battling a bit more of the vomiting lately. I'm worried that he's losing too much weight and that he's not enjoying his life. He's happy when I'm holding him or when he's curled up next to me on the couch. He likes being snuggled up in a warm blanket. He still begs for bits of people food, and I have to say I've been giving him more of it because I'm worried he isn't really eating otherwise. 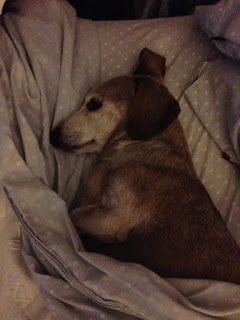 But then I see him curled up in bed with me and think that this is a pretty good life for him. Maybe it's just taking a bit longer for him to bounce back from this illness; he is 14 1/2 after all. 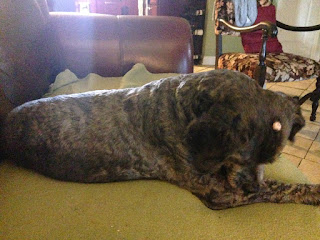 After a major, much-needed grooming appointment, Charlie-dog's little friend on his head was more prominent than ever. He had a giant wart on top of his head and one on the top of his ear that were really bothering him a lot; he'd drag his head down the hallway wall to try to scratch it. I scheduled a dental cleaning and wart removal for him just a week after Lowder had been so sick. (Y'all can just imagine my vet bill, right?!) 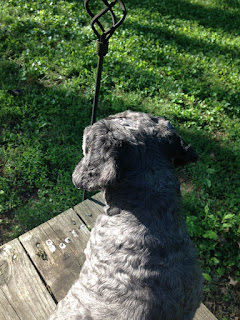 He came through his surgery like a champ and seems to be feeling really good these days. They didn't have to remove any teeth in his dental workup, and the two large warts on his head and ear are history. While he won't get his stitches out for another few days, I think he's back almost 100%. 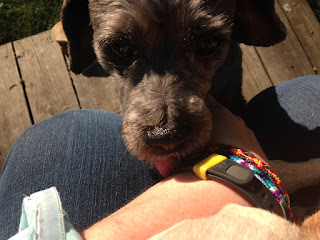 I think Charlie-dog has such a cute little face in this pic. He really is a very sweet dog as long as we can control the incessant licking and itching.

Yeah, it's been a tough month in Lowderland for the pups and their mama. I'm ready for both of them to feel great and be back to normal. I'm super concerned about leaving Lowder while I'm in Europe, but I'm consoling myself with the fact that Kelsey will be there to take care of him and love on him when I'm not.