In honor of Mother's Day this year, I thought I'd share a list of some things I remember that my mother loved. This might make excellent layout fodder for the future, and it's good to remember these details about her. Since she's been gone 15 years now, I'm sure there are memories that are already beginning to fade. Best to get them written down for posterity...

1. Pink lipstick - I can still see the various shades of pink she wore in my mind's eye. As someone who rarely wears pink anything, this is a detail that sticks out in my memory of her.

2. Diet coke with ice, often in a giant sippy cup - she rarely went anywhere without a drink in her hand, and this was her drug of choice. Maybe that's where I get my bad habit...

3.Denim anything - jeans, skirts, shorts, tops, coats. I think my mother had every single item of clothing made in denim. Sometimes it was blue, sometimes white, and sometimes black, but she loved denim fabric. I'm not like her at all in this regard; I kind of hate denim.

4. Sunflowers in particular, but all flowers in general. She was fond of planting whiskey barrels full of impatiens and petunias and tended to like pink and purple flowers if she couldn't have sunflowers.

5. Giant jewelry, preferably gold. Mom was flashy; she loved big jewelry that made a statement. I can't fault her for that too much, I guess. There have been times in my life when I loved a piece of statement jewelry. I just never wore as much of it at one time as my mother did.

6. Chinese food. When I was small, she and my aunt would get Chinese takeout from the ONE place in town that sold it. As I grew up and became a mom myself, she would often take us to lunch at a local Chinese buffet and almost make herself sick on her favorite items. I like Chinese food okay, but it's not my favorite.

7. Disco music.  When she was married to her second husband, they would go clubbing quite frequently and even entered dance contests together. I wish I could have seen them dance together sometime. I'm sure I would have been both terribly impressed and horribly mortified at the same time.

8. Big purses. What else would you expect from someone who also like giant jewelry, right? I'm afraid I've inherited this preference from my mother too. Boy, she loved a big purse that she could stuff all kinds of things into without worry of it not fitting. And yes, she loved the giant, overstuffed with receipts wallet to go with it.

9. Crafts. She made latch hook rugs. And she dabbled in painting sweatshirts. And she knew how to macrame. She could sew pretty well. And she made some jewelry. She was never someone who was "all in" on a hobby because she worked so much, but she did like to dabble in crafty ventures occasionally. I think she would've done much more with crafting if she'd had the time and the disposable income.

10. Gossip magazines. She'd always grab one at the grocery store to enjoy later on when she had some free time. She liked things like The Star and the National Enquirer - real dirt rags in terms of journalism. I think she liked the sensational aspect of it all. I thought she was kind of nuts for reading it, but I think it helped her relax and not take life so seriously sometimes.

Here's a pic of my mom and Kelsey from Christmas 1997. Kelsey was 5 and my mom was 45, just a year older than I am now. Between the list and the pic, this has definitely been a walk down memory lane for me. If you still have your mom, reconnect with her today. If not, then reconnect with some memories if you can. 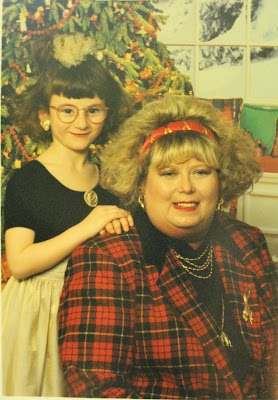 Email ThisBlogThis!Share to TwitterShare to FacebookShare to Pinterest
Labels: All about me, Family life, Lists, Writing