Checking in - My Planner Update 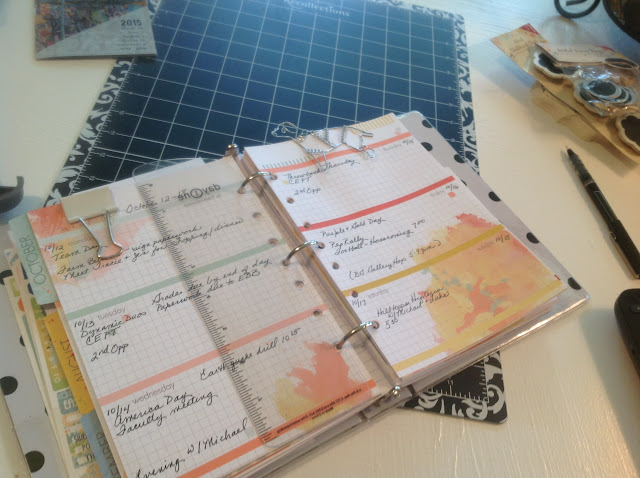 Happy Monday, everyone! (I don't really mean that, but I'm trying to be upbeat and perky as I face a Monday morning that means going back to what will likely be a very stressful work week after a relaxing fall break. Positive thoughts...positive thoughts...it will be good to see my students at least. (Ironically, my job stress is rarely due to my interactions with students; it's much more a reaction to the administrative/testing/state/public parts of my job.) Since I'm headed back to work Monday, I sat down Sunday afternoon and began working on updating my planner for the rest of October and part of November. That sounds easier than it is.

First, I checked my work Google calendar and transferred the dates/activities from it. Then, I checked my personal Google calendar and did the same thing. (For whatever reason, no one at work can show me how to make my professional and personal Google calendars talk to each other, but that's another story.) Next, I went through my email accounts (four in all!) and transferred other dates/activities from them. Once that was completed, I scanned through the notes on my phone and tried to recall vague telephone conversations where I committed to upcoming plans. As you can imagine, this is probably not the best way to keep up with upcoming events. I'm trying to do better, though; after all, I've now written it all down in my handy dandy planner.

I think the idea of a planner is a good one, but I'm not convinced that it's workable for me. I've been subscribed to the Cocoa Daisy planner kit since August, but I haven't been using my planner regularly like I originally planned. Sure, I take it to work with me each day; sometimes I even write in it. I'm just not sure that the planner is really helping me organize my life. The jury is still out, I guess. My membership continues through at least January, so that should give me time to figure out where I stand on the project.

One of the things about the Cocoa Daisy subscription that kind of surprised me was the fact that the pages are already VERY decorated. I mean, I know that there are people who add a lot of decorations to their planners, but I don't think the Cocoa Daisy collections really lend themselves to that. If I added my own decorations, then I'd be covering up parts of the paper that are already very pretty. To me, that would seem a bit redundant. Does that make sense? There were a couple of months that the pages had so much decoration on them that I didn't really even feel like I had enough room to write. I was pretty turned off by that fact, but that hasn't been a trend that has continued thankfully.

My other big quandary has to do with the fact that I think I prefer the Midori-style traveler's notebooks over the traditional planner style. I know that Cocoa Daisy offers a Midori style planner insert instead of the traditional style I've been getting, but I missed out on the chance to shift over to that one. At that point, I just didn't know I'd like it better.  Of course, my professed love for the Midori-style TNs is technically hypothetical at this point. I keep making different Fauxdoris, but I haven't actually used any of them yet. I'm unpredictable like that, you know. Haha!

I do like that my Cocoa Daisy planner subscription seems to be a good value. I've tried adding up the retail cost of the individual items included in my monthly subscription, and I'm pretty sure that my value for the money is a positive one. I also like that there are exclusive products that you just can't purchase anywhere else.

I'll check in with you all again in a few weeks about how I'm using my planner and what I do/don't like. What about you? Are you keeping a print planner that's artsy? I'd like to hear about it. :)

Tiff
Posted by Tiffany Lowder at 12:00 AM