Last week, I started working on my Mexico mini-album. First, I selected my photos and adhered them in the album. It's mostly in chronological order, but I didn't get bent out of shape if a particular photo ended up being slightly out of place. Choose my battles, right?  I also chose some of the PL style cards I wanted to include for titles and journaling, but I didn't adhere those yet.

At that point, my desk was such a mess that I couldn't make myself do anymore work on it for several days. This weekend, I forced myself to clean up my desk area significantly and try to put things to some sort of rights. Here's a look at my improved, albeit not totally organized, desk right now.It's at least a step in the right direction...

(Side note: I really should sand and repaint the top of my desk when I get back from Paris this summer. It's looking extra ratty right now. Also, I need to finish painting the "new" window trim. Home ownership is a never-ending series of projects, isn't it?)

On Saturday, I went through my mini-album and adhered the journaling cards and titles I had chosen for the pages. Most pages don't have titles, but I think that's perfectly okay in a mini-album.

Then, Sunday afternoon, I gathered several embellishments and began adhering those in the album. Since I used glossy accents to adhere some items, I had to step away and let things dry for a while. (That's what's going on in the photo above from my desk.)

Finally, Tuesday (since I was off work for Election Day), I went back into my studio and finished the album up by writing my journaling and adding the finishing touches of ribbon, washi tape, and a title for my front cover of my album.  Here's a look at the cover of the final project: 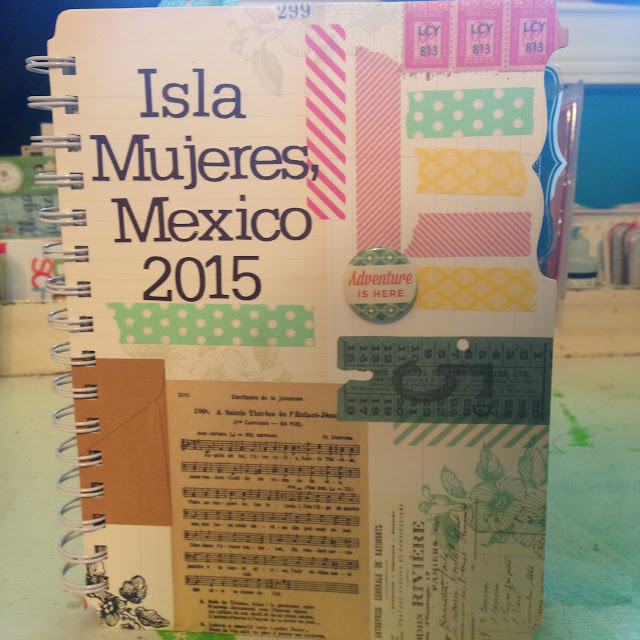 For the first time ever, I'm including a video to show the mini-album I made. Hope you guys like it! Take a look and listen, then let me know what you think.