Birthday Celebrations with the Fella 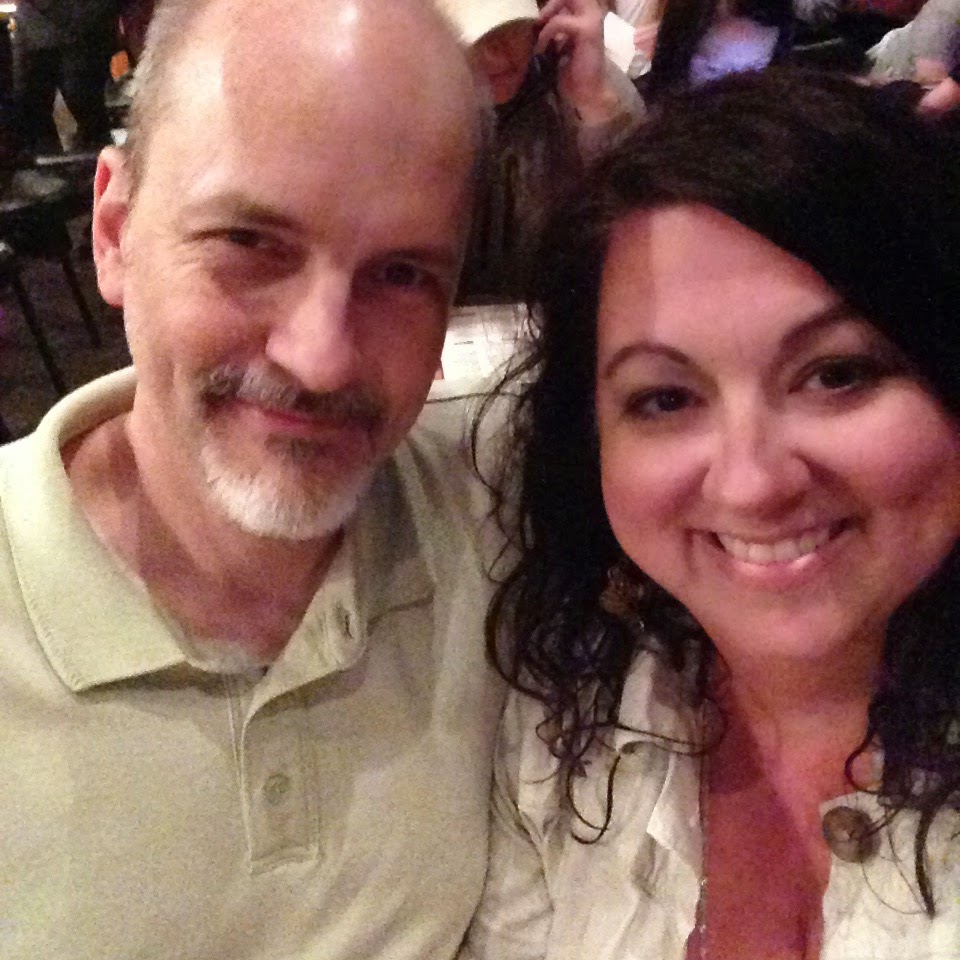 Wednesday was the fella's birthday, so we had to celebrate, of course. I'd gotten us tickets to see one of his current fave comedians at Zanie's on Tuesday night. Even though I still felt pretty puny from the bugs I'd picked up, I managed to get myself together enough for us to go. We had a great time listening to and laughing with Doug Benson. He hosts a couple of rather liberal podcasts and often appears on the Comedy Central show At Midnight. I only got this selfie of us before the show began; once he started his show, I was too engaged to stop and try to take his photo.

The very next night, the fella's actual birthday, we headed back to Nashville for two events. First, we made our annual stop at The Flying Saucer bar for a bite to eat and their annual commemorative glass. Now, I have two of them. I think the fella has half a dozen probably. This is a really fun place to visit; plus they have a huge selection of beers. I don't like beer, so I stuck with my Angry Orchard Apple Cider beer. It has to not taste like beer for me to drink it. Haha! If you try 100 different beers, you get a gold plate on the wall with  your name on it. If you drink more than 100 different beers in different increments of 100, then you qualify for a gold plate with different colored centers. I'll never qualify, and that's just fine with me. 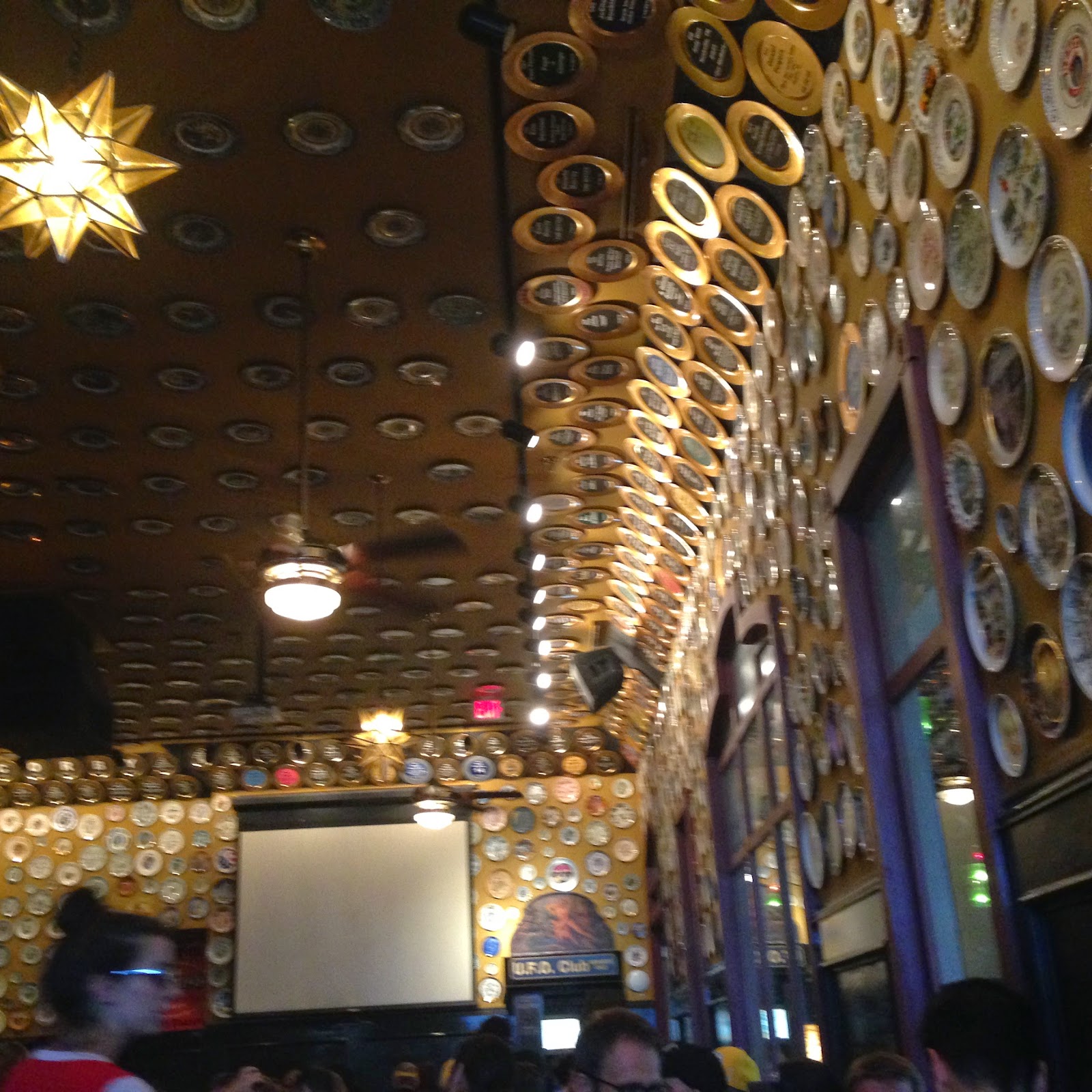 In order to get these, we had to wait until 7 pm and order an extra beverage. 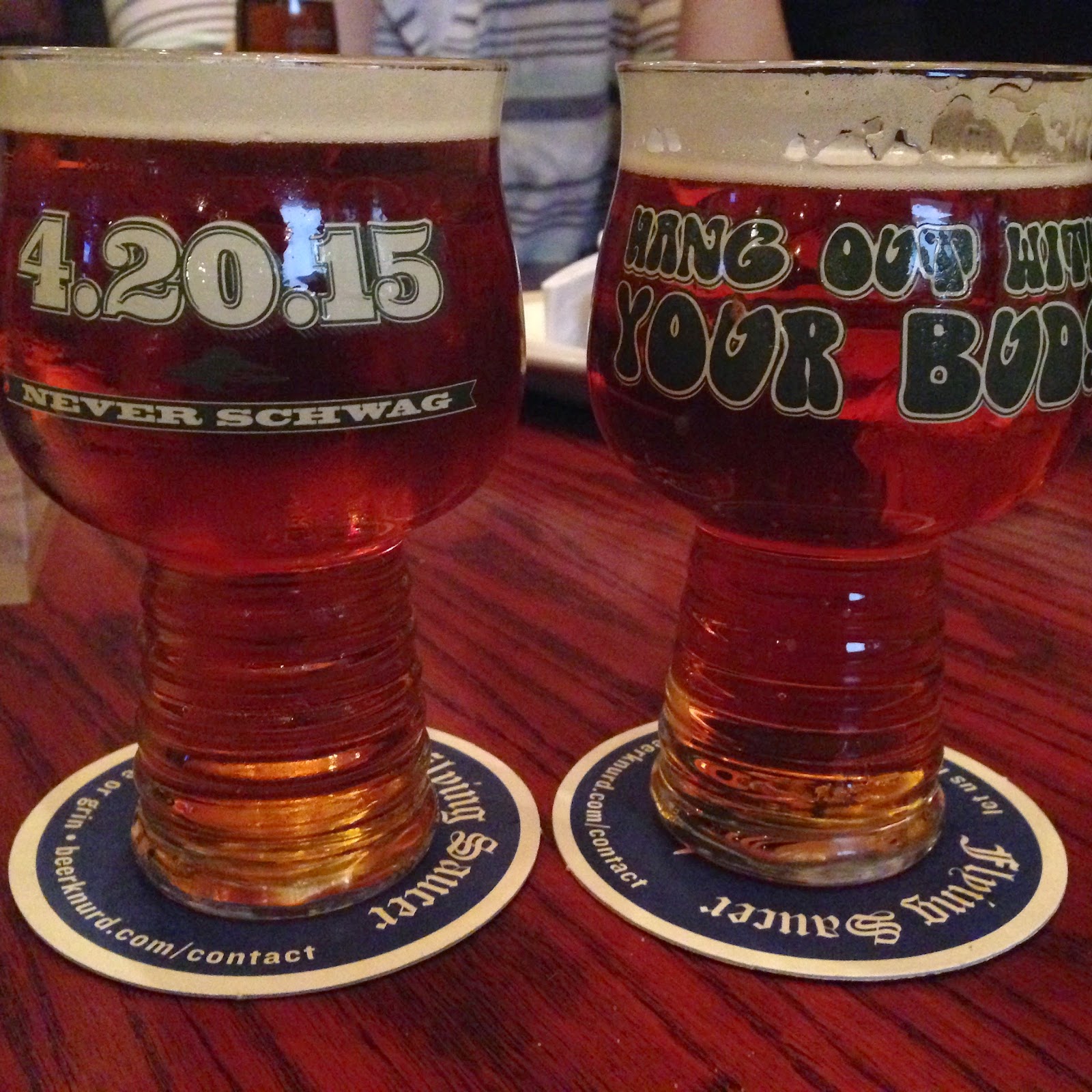 Here was round 1 - my choice is on the left. The beer that the fella drank was almost black and very bitter! 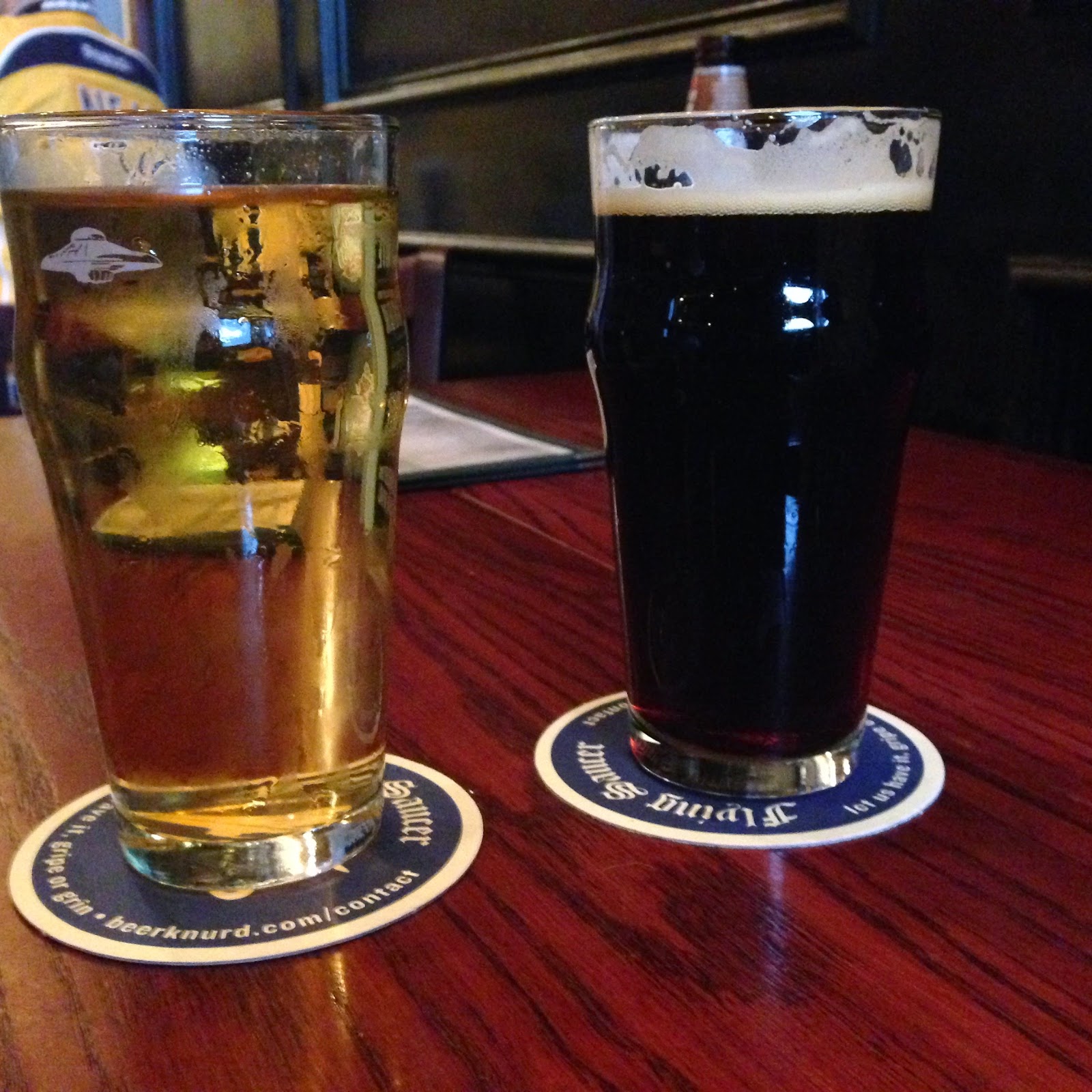 We shared our table with these college kids because the place was so crowded. There was a playoff hockey game scheduled that night, and we had to wait for a seat for almost 20 minutes. When we snagged a large table, we thought it only fair to share with someone else. I also gave the girl in the middle my second beer; I just couldn't hang. 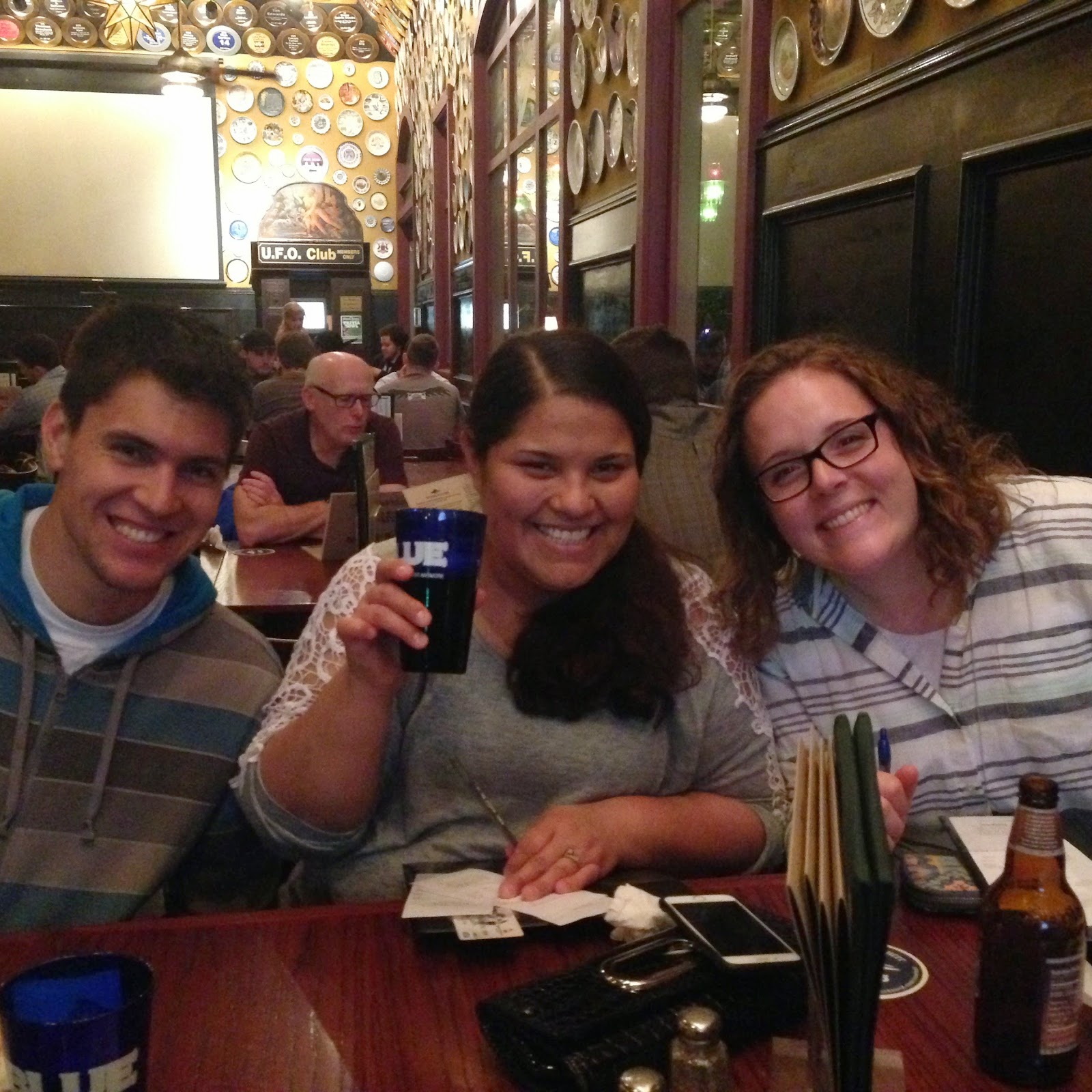 After our adventures at The Flying Saucer, we headed over to the Bellcourt Theater in Nashville and attended a 'movie interruption' hosted by Doug Benson (the comedian from Tuesday night's show) and three of his friends. Basically, they played the original Footloose movie and provided a running comedic dialogue on mics throughout the movie. Most of the people there were college aged, so few of them had already seen the original film. I had a great time laughing at the comedians' antics and reliving that 'classic' from my high school days.  If you've never attended something like that and you like snarky humor, I think you should give it a try. 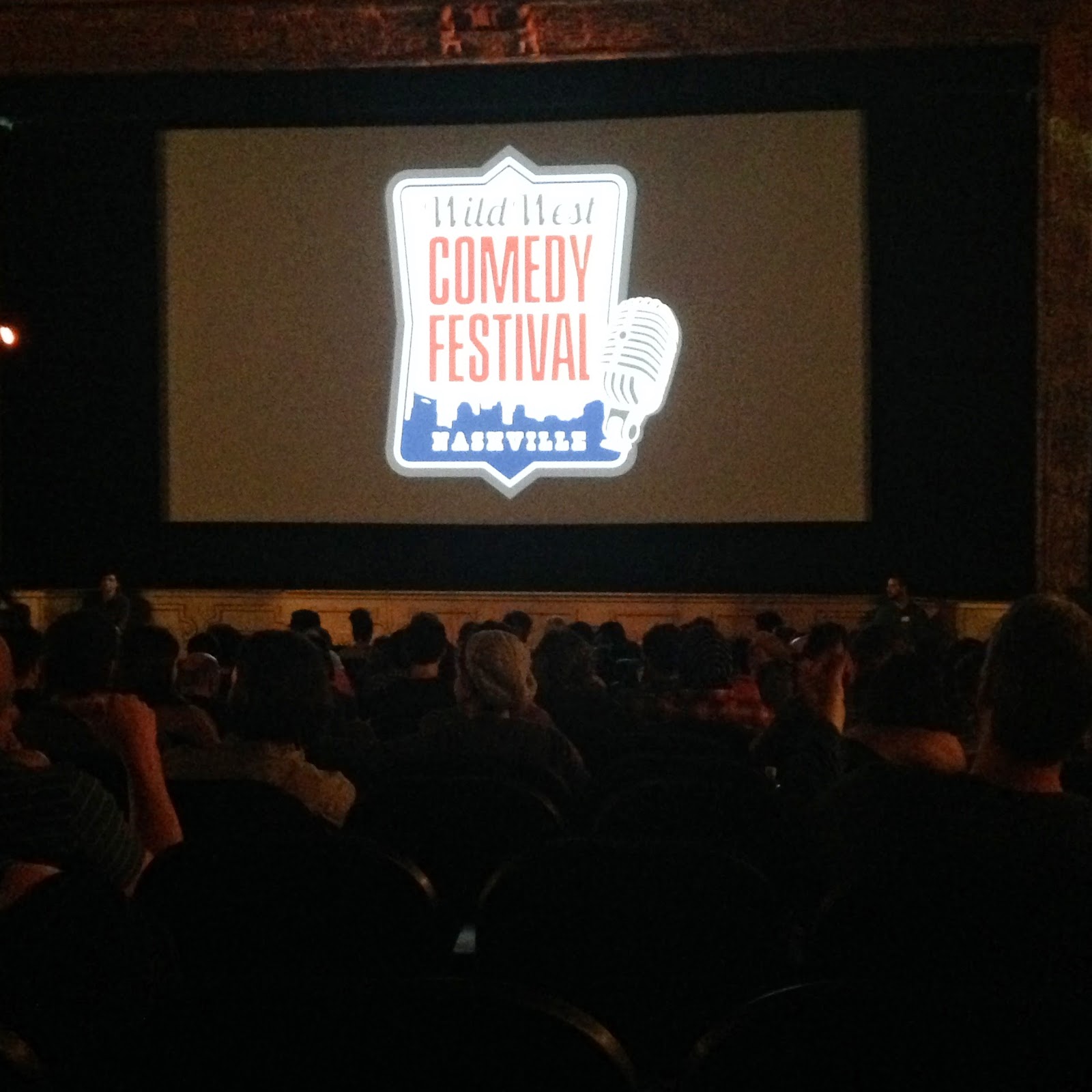 The fella prefers to have experiences rather than gifts, so I'm hoping that he enjoyed our two-day comedy extravaganza. Happy birthday again, babe!

Posted by Tiffany Lowder at 3:00 PM