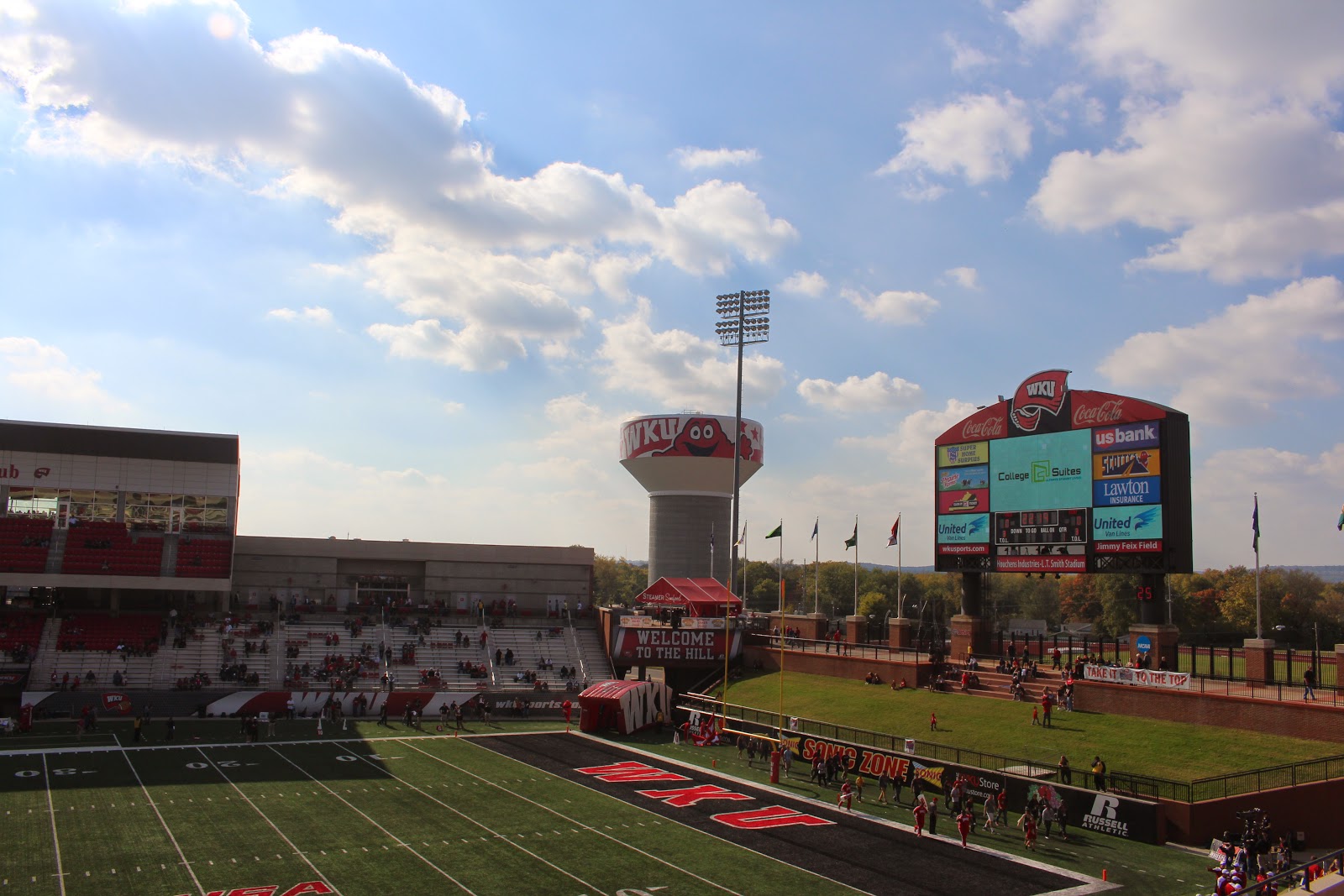 Last Saturday, I went to my first football game this season at Western Kentucky University. I'm an alum X 2; my daughter is a student; my mom and dad both attended WKU; my brother played football and graduated from WKU; I have several students who currently or formerly played for the Hilltoppers. My ties to WKU run deep. 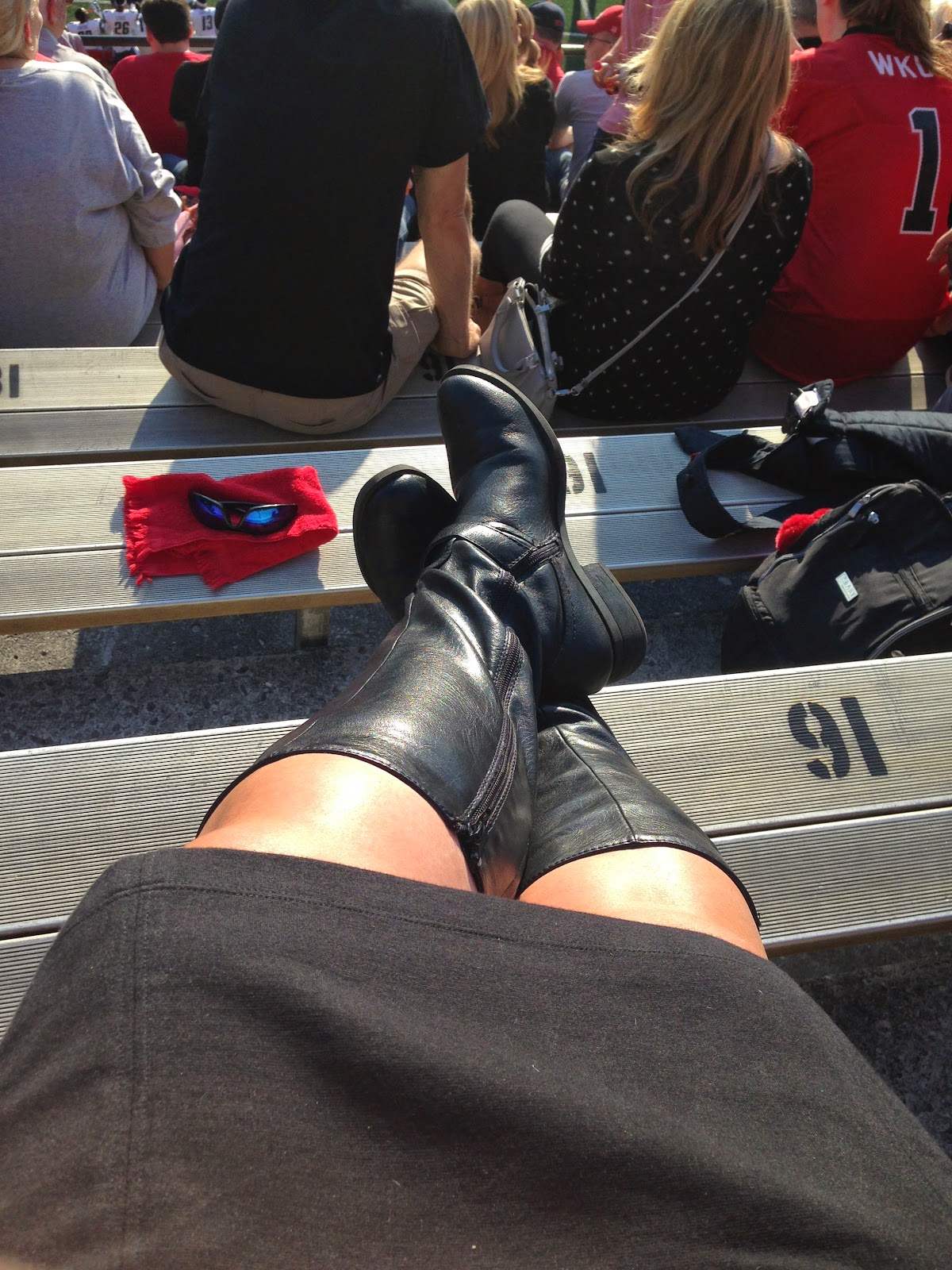 While the colors for WKU are red/white; today's game was supposed to be a blackout. Here's a selfie of my legs as I sat up in the stands. It was hot! Like 80+ degrees last Saturday afternoon. (Today, it's supposed to be a high of 42, but that's the South for ya.) Yes, I'm wearing a dress and boots. In the South, we dress up for football games. 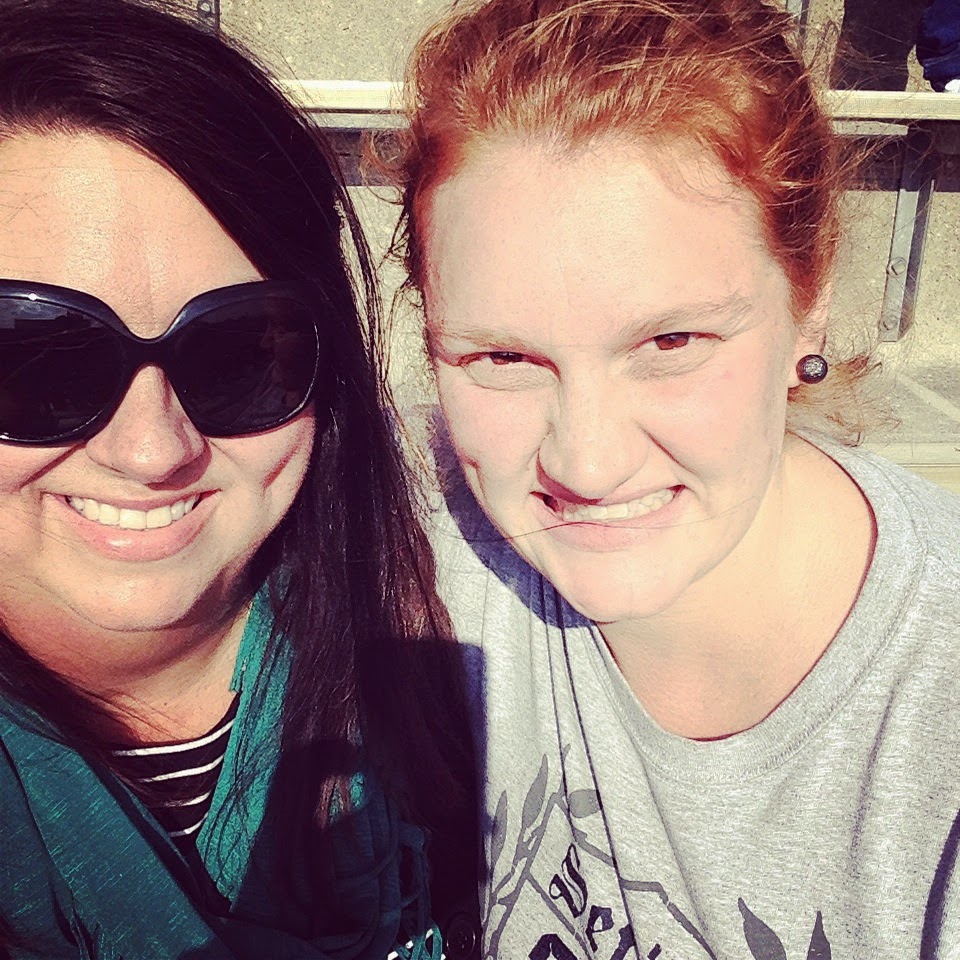 I ran into my niece at the ballgame, so we snapped a quick selfie in celebration. :) 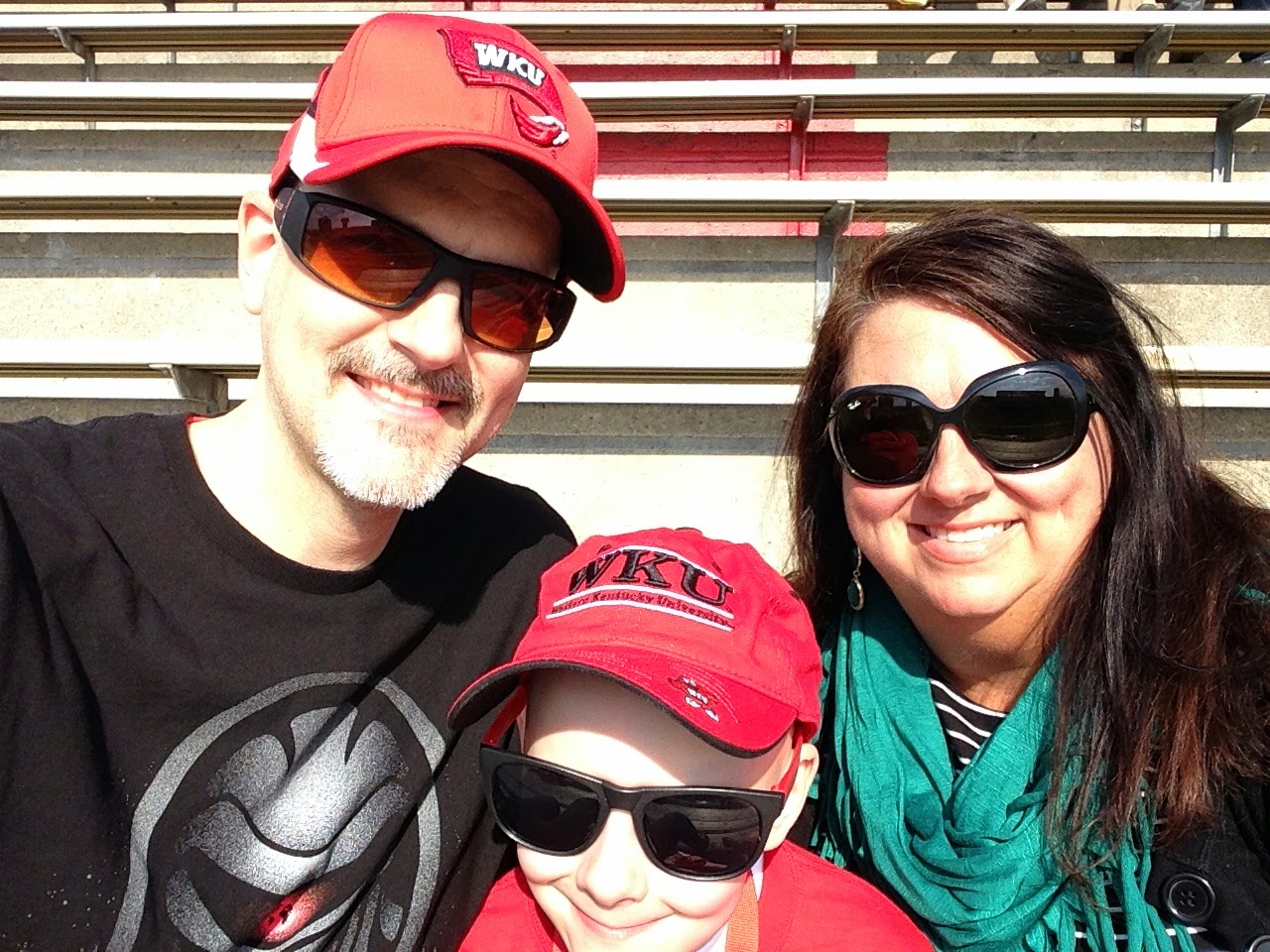 The fella snapped this pic of the three of us at the game. His arms are super long, so he's kinda awesome at selfies. 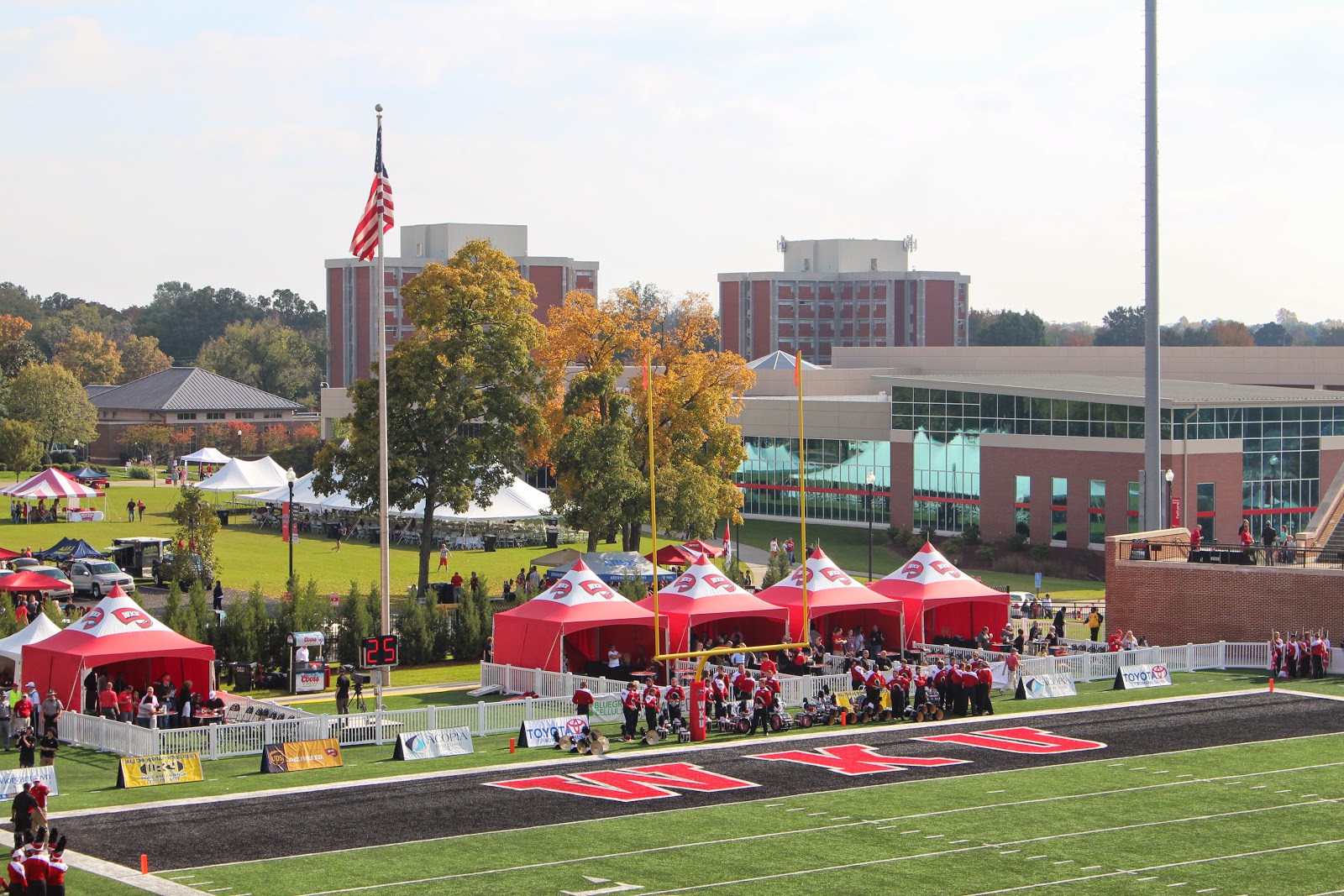 Thought y'all might like to see our view of the endzone looking out at the lower half of campus. 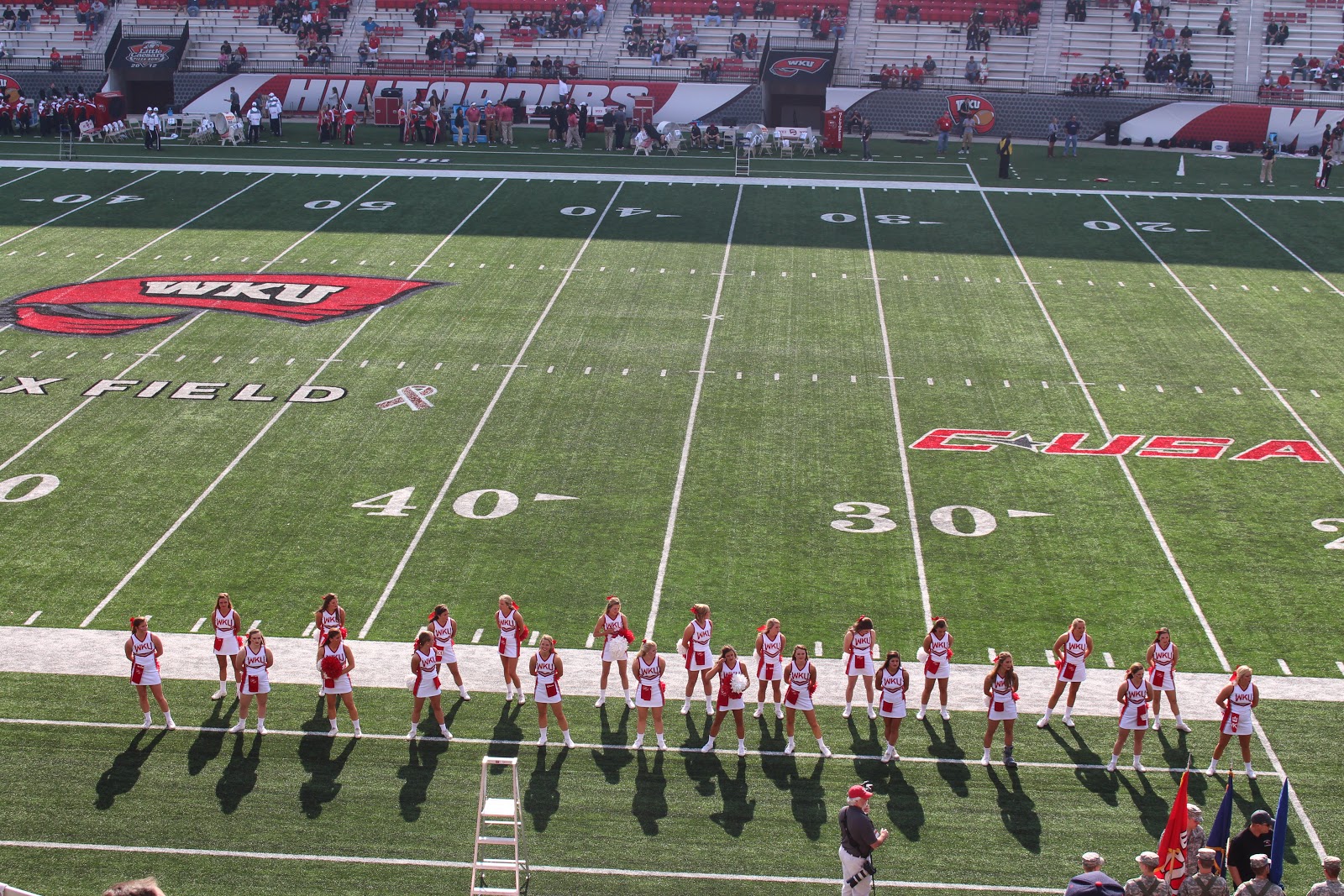 The cheerleaders were very entertaining. 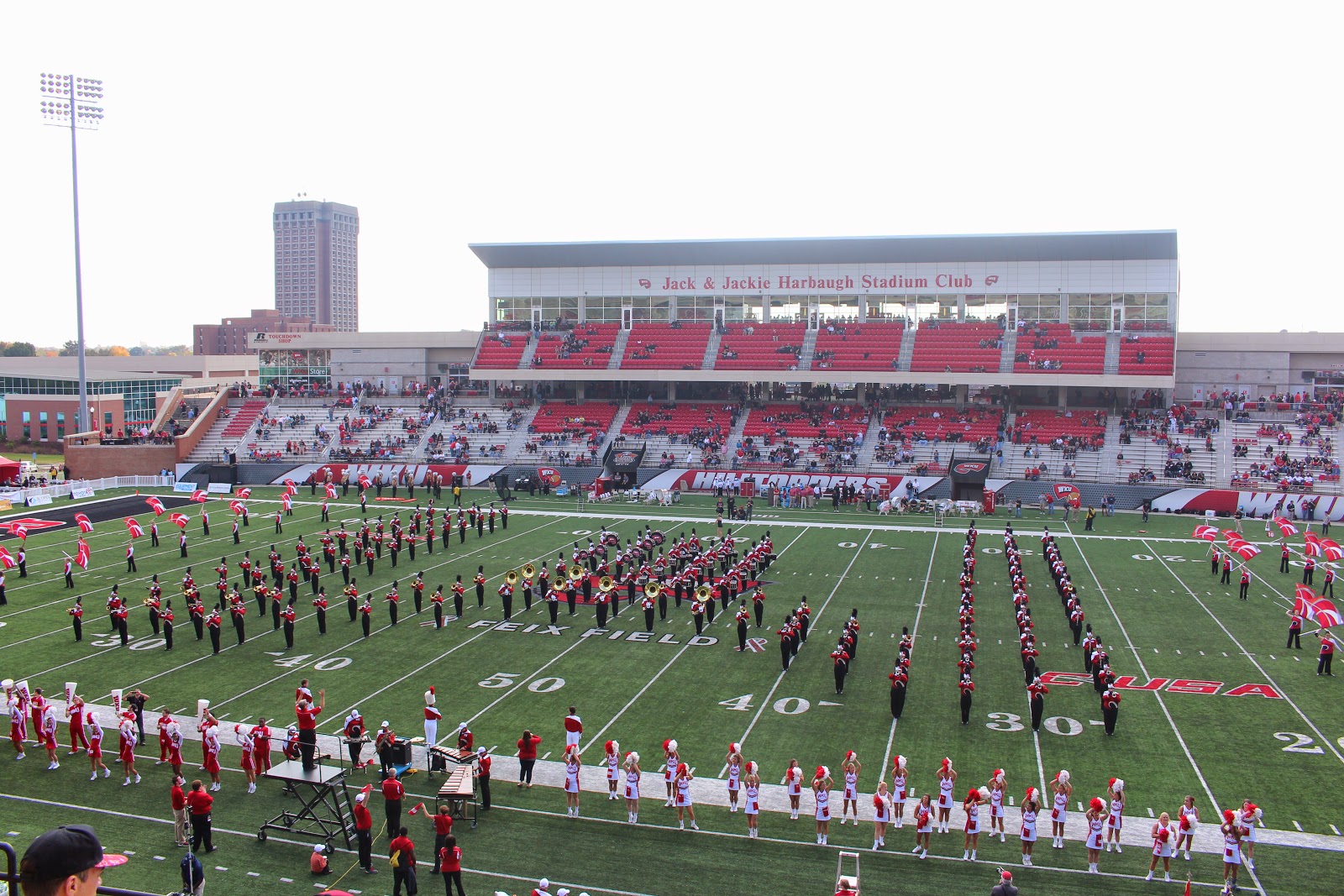 The band was fab! I don't remember the band being this good when I went to school here in the 90s. 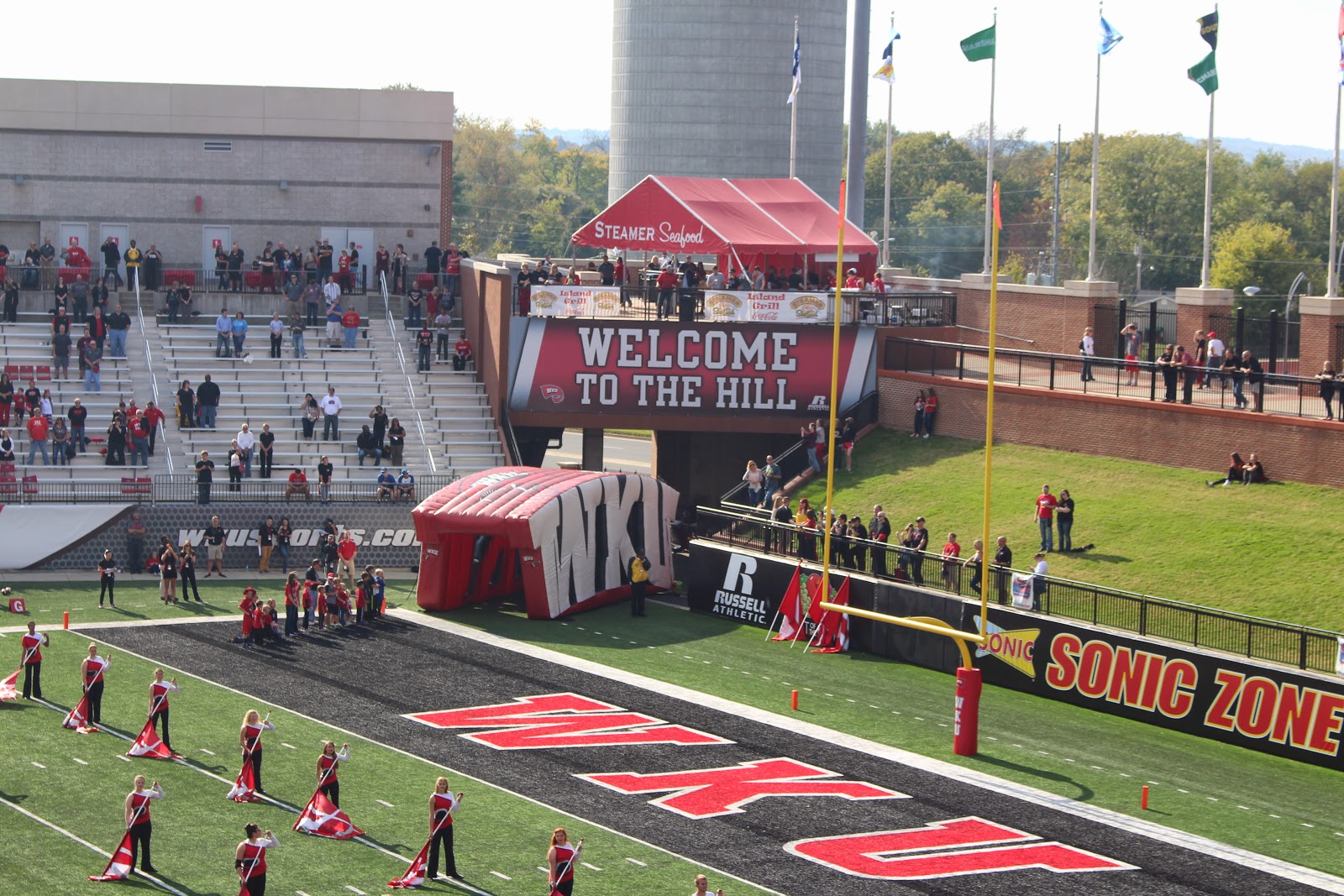 Kids who join the li'l hilltopper program (or something like that) get to line up on the field as the players run out in great fanfare. The fella and his kiddo headed down there about 15 minutes before the game began so they could be part of it. 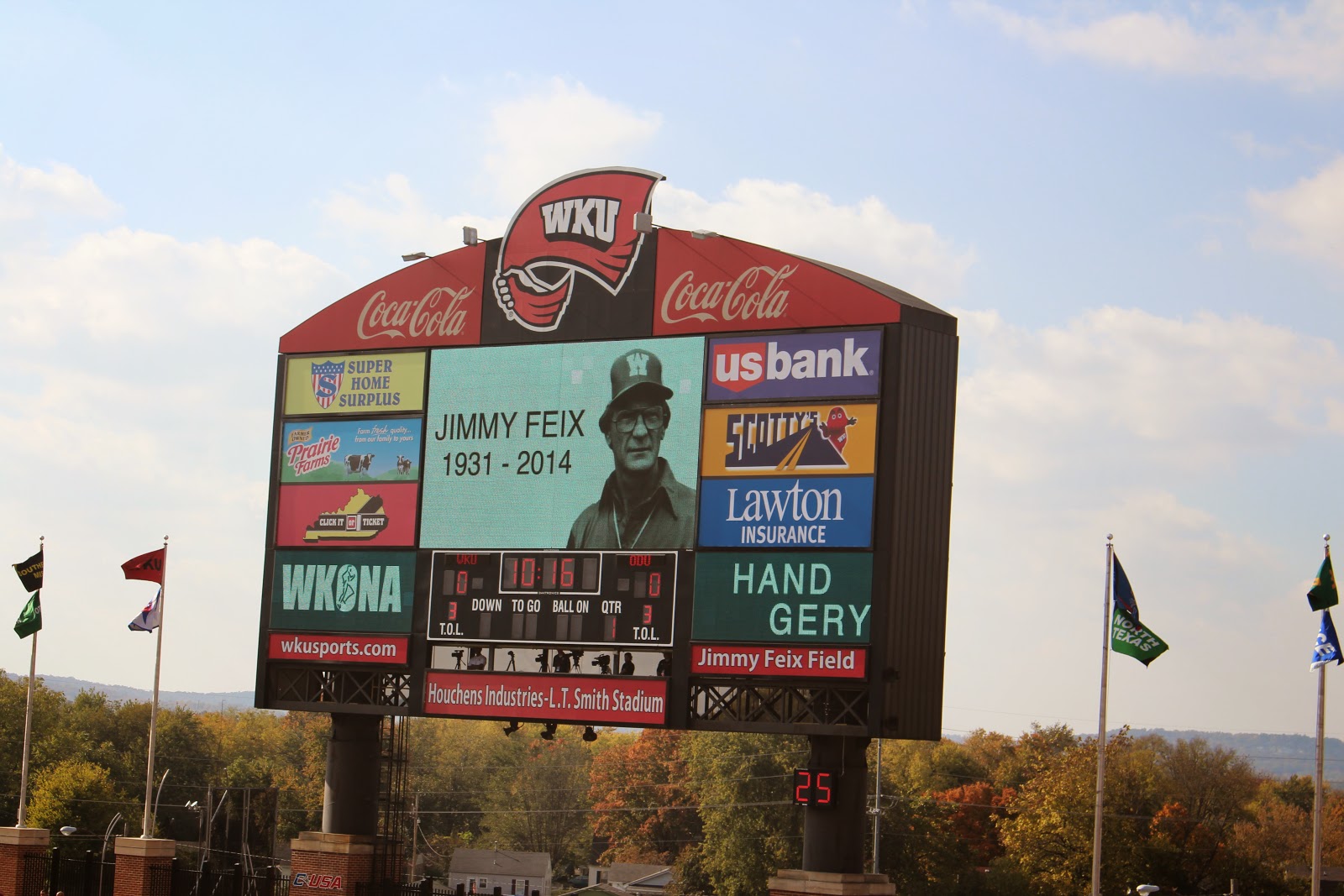 Jimmy Feix, former player and coach and athletic director, died this year and was honored before the game with a brief memorial video shown on the scoreboard screen. The players also wear a sticker on their helmets honoring him. 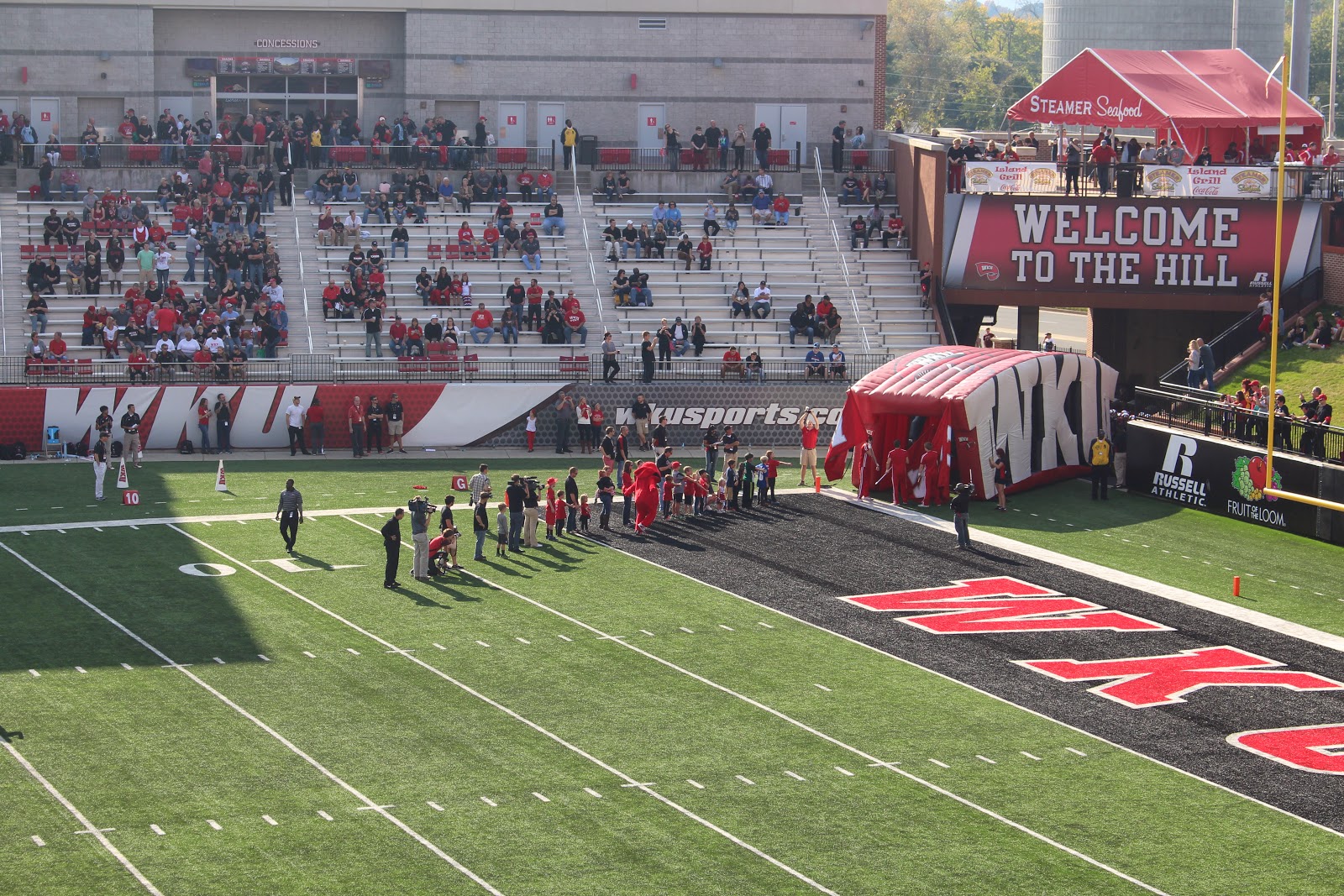 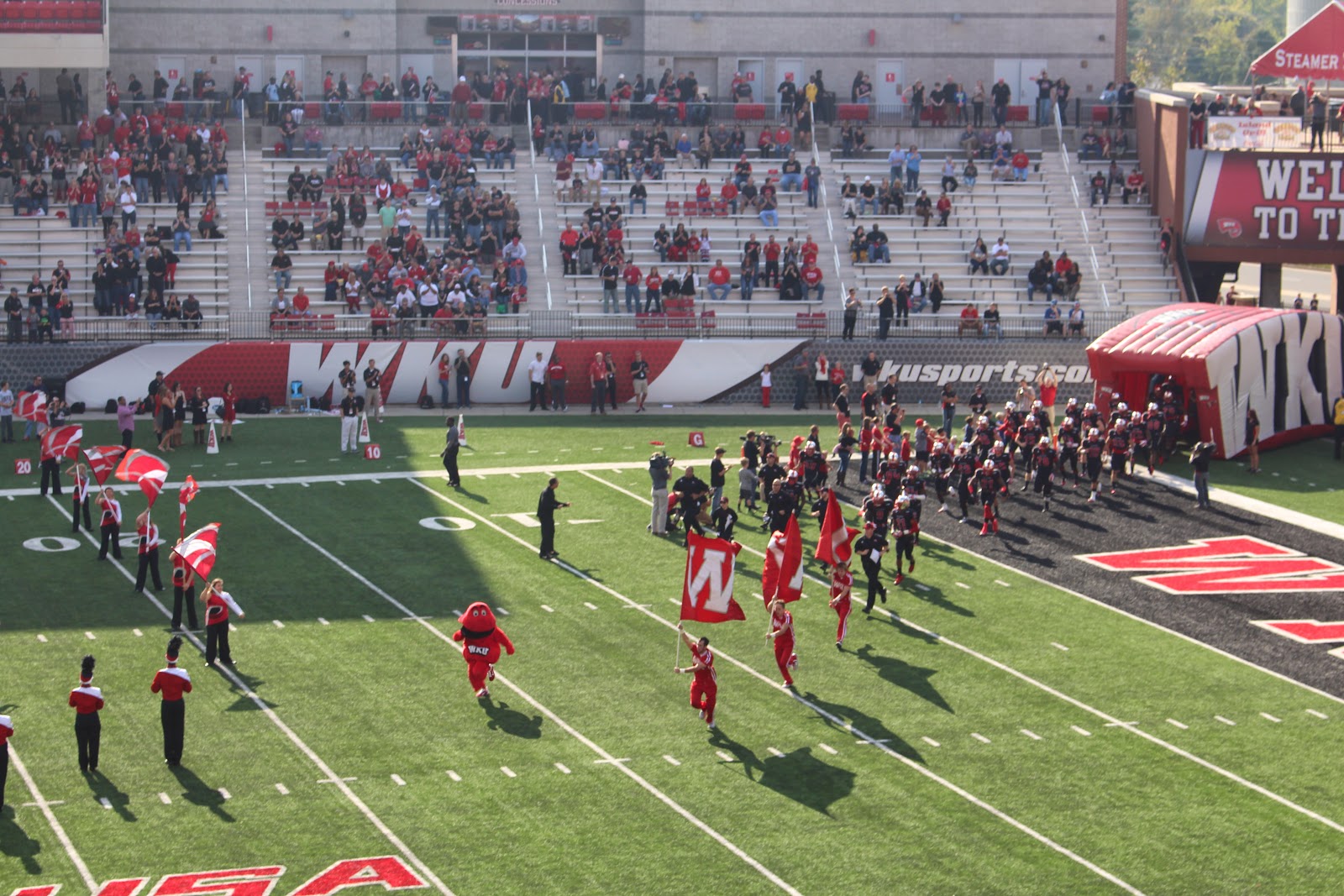 Here are the players rushing onto the field. 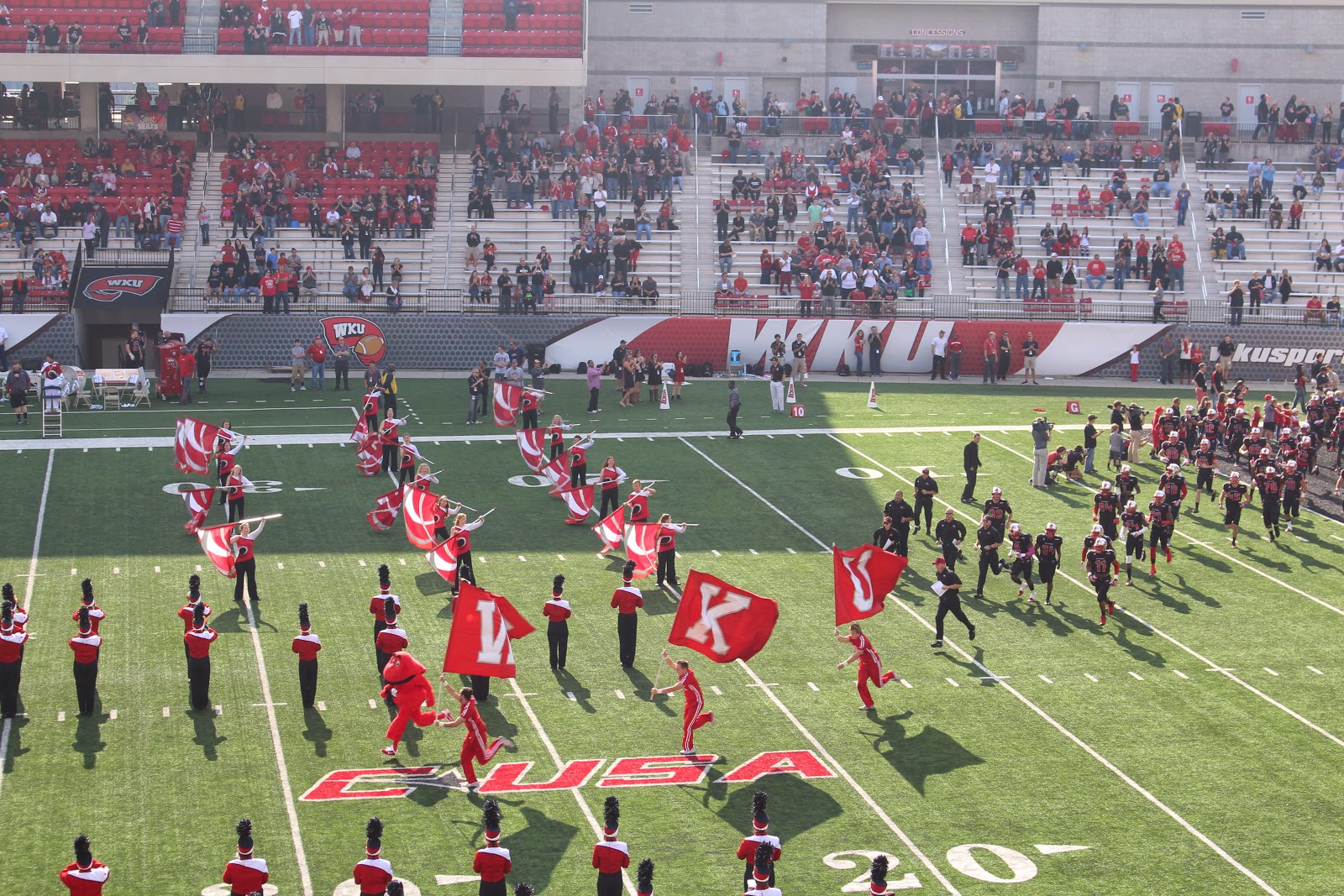 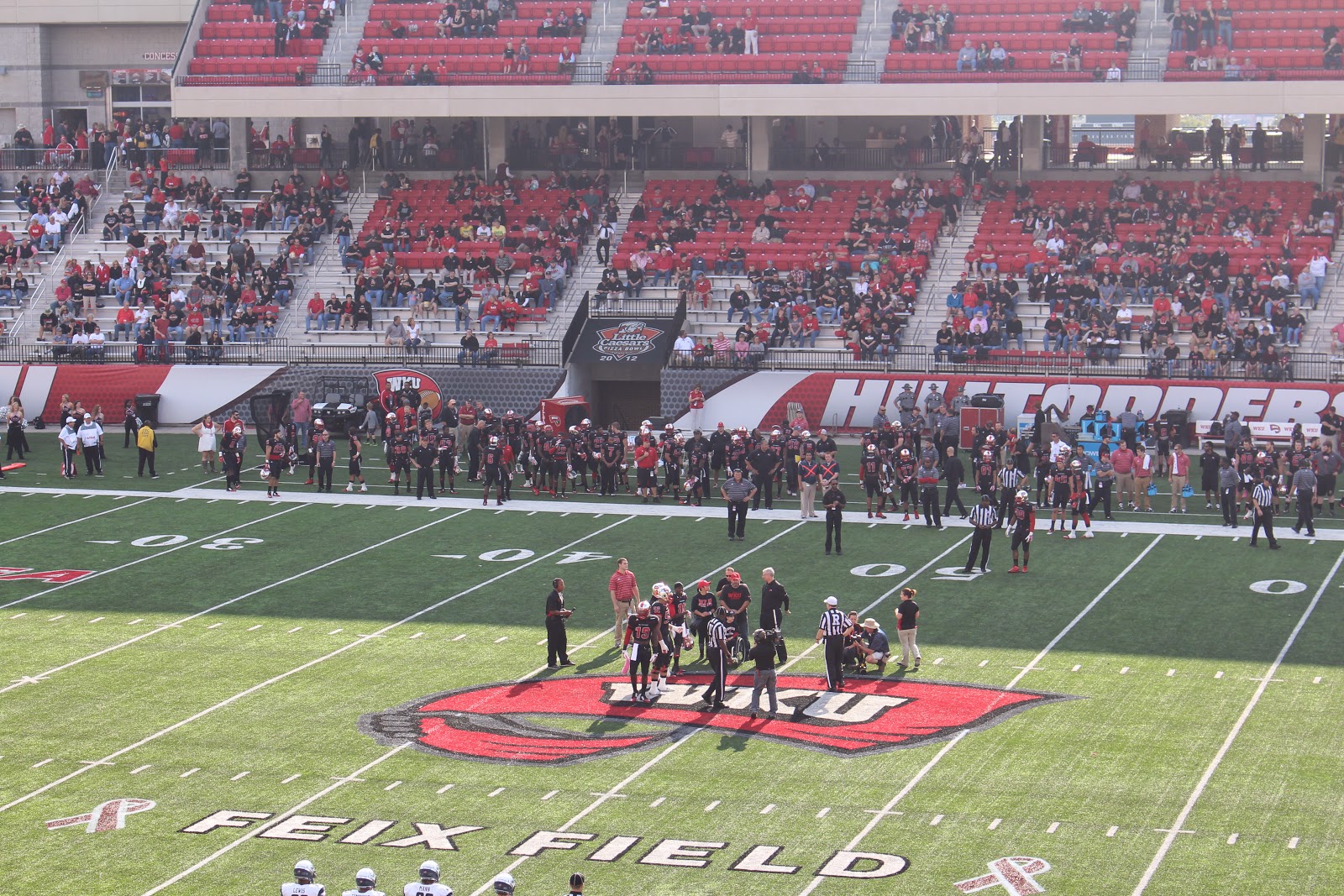 The coin toss was in favor of the Tops. 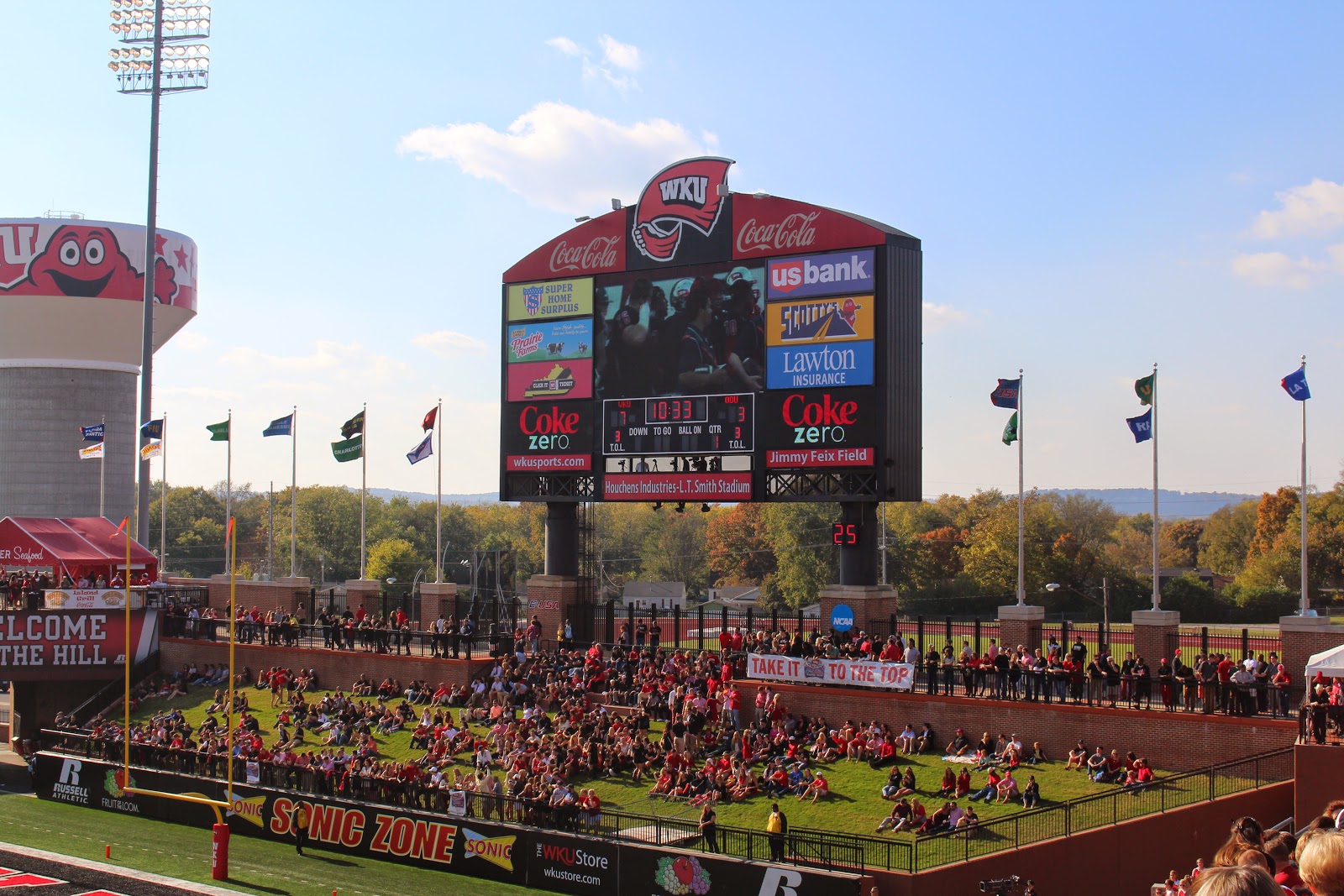 This endzone area is where a lot of families with little kids sit. It lets the kids run around instead of having to stay still up in the stands. Plus, they get an opportunity to catch the football after the extra point attempt following a touchdown. 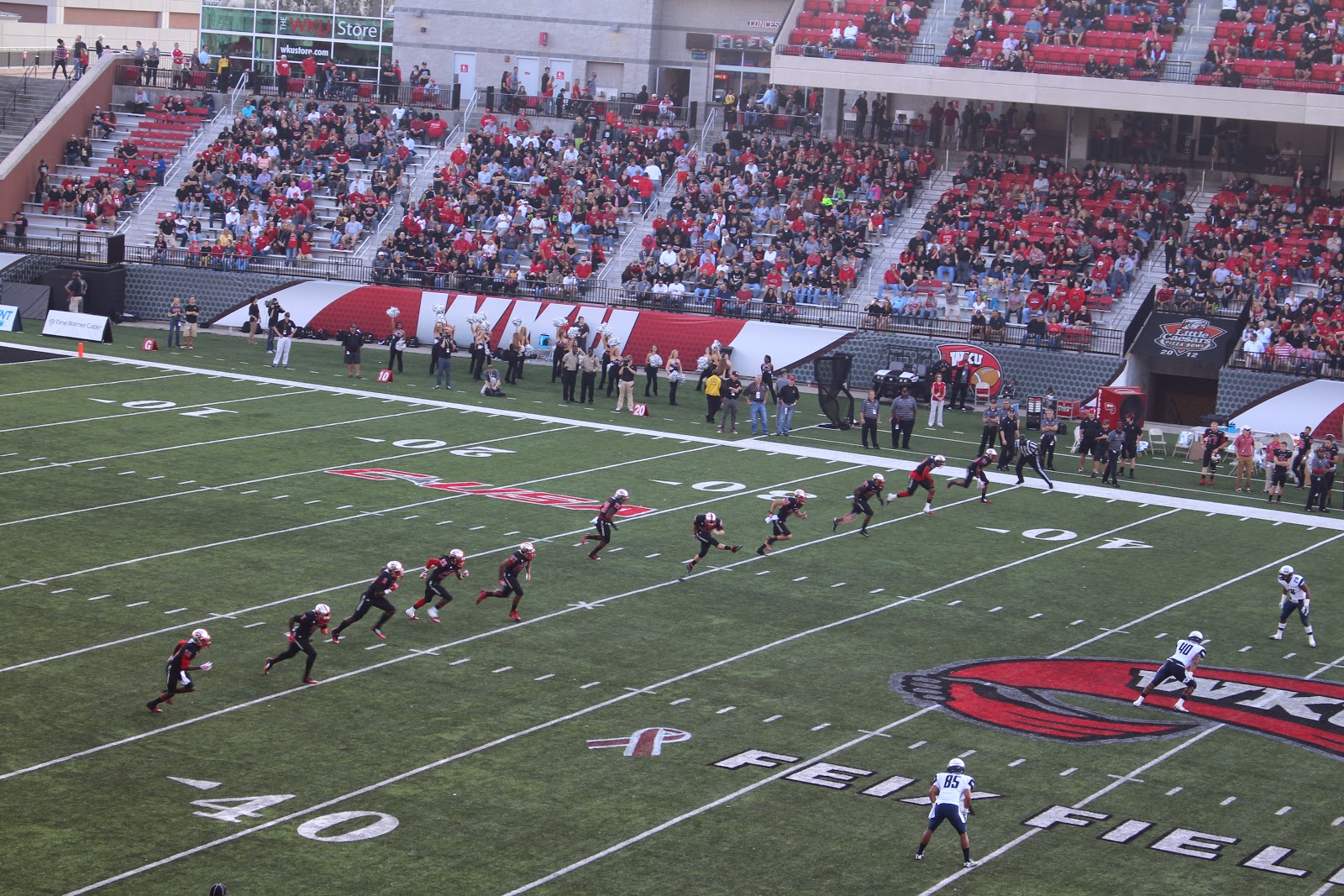 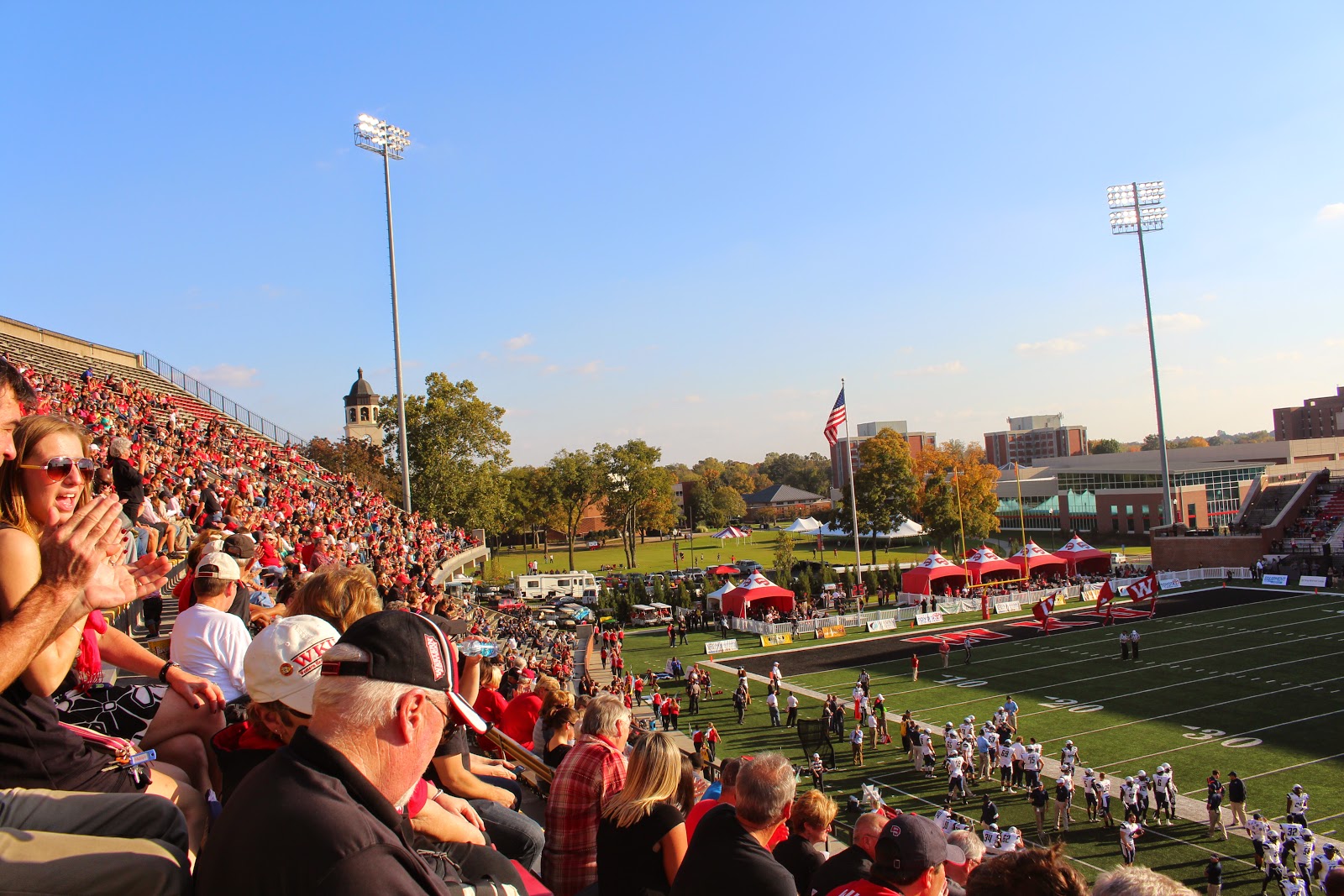 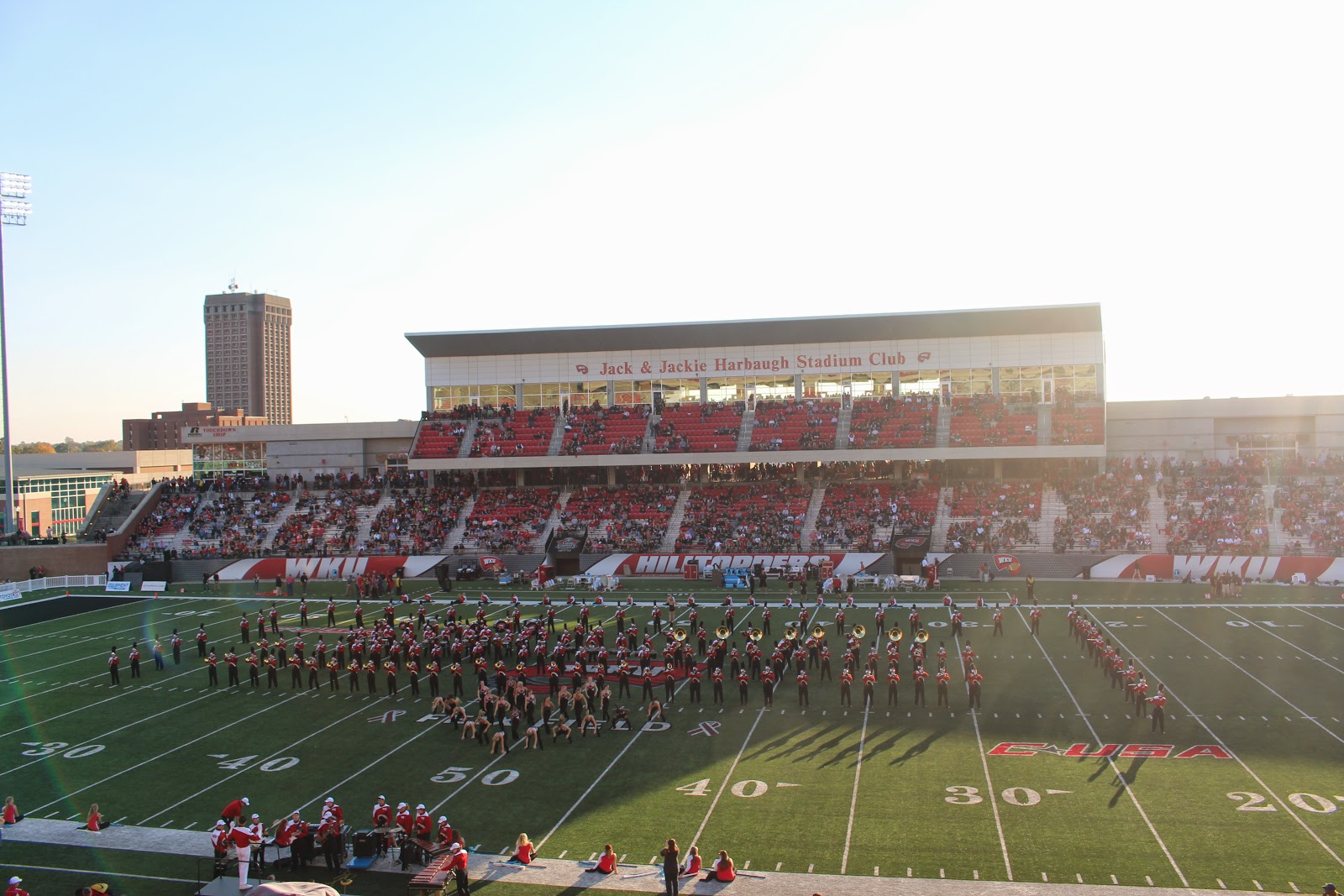 The halftime show with the Topperettes and band and flag choir was pretty impressive too. 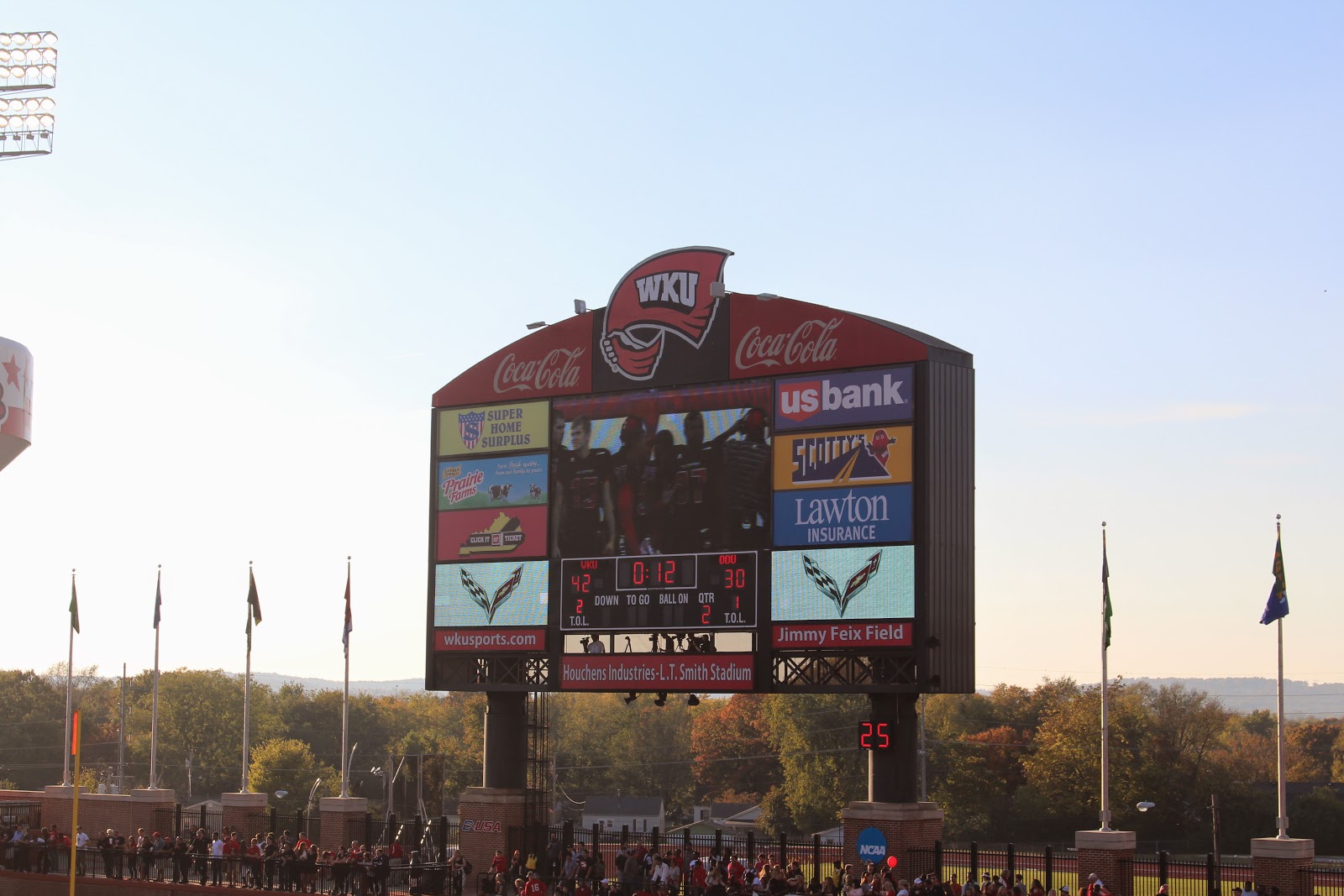 Yeah, that was the score at halftime. By the time the game ended, it looked more like a basketball score than football. The final was 66-51 in favor of the Tops. While the ending was a good one, it's kind of embarrassing that we didn't have any better defense than that. Don't get me started on my football soapbox! 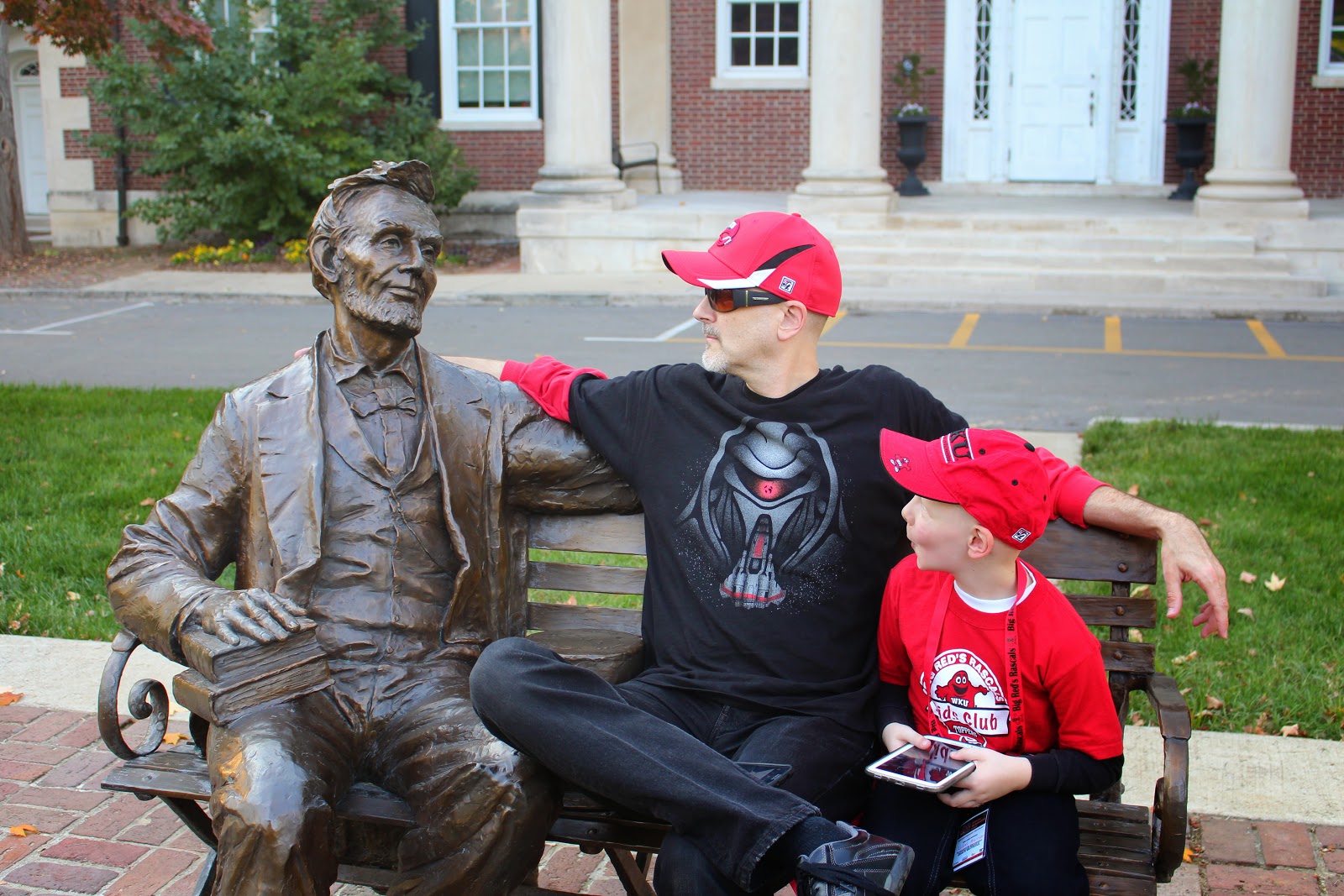 As we trudged back to our car, we stopped for a brief chat with Abe Lincoln. 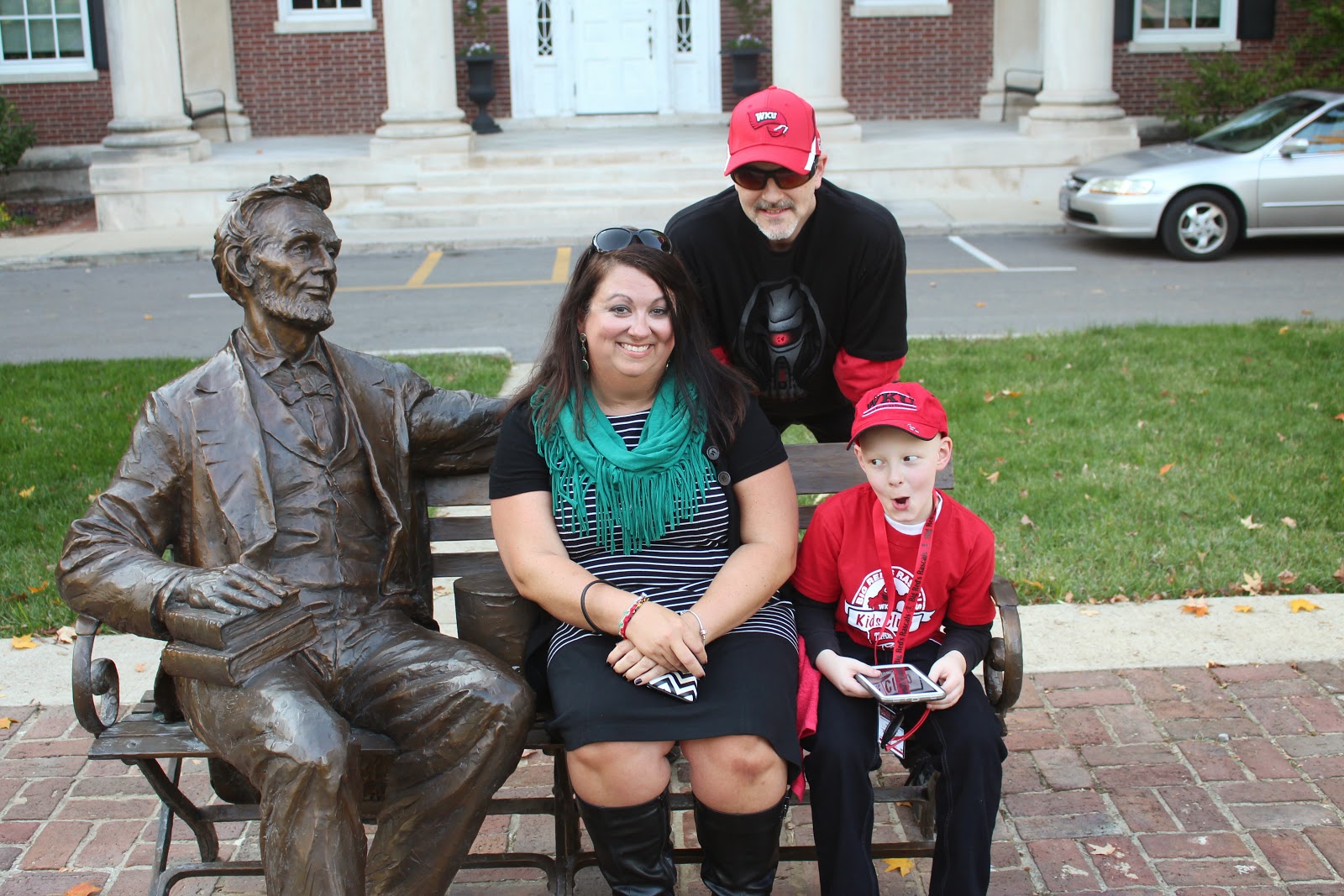 Then some college kids offered to take a picture of the three of us, so we had to take them up on it, of course. Yes, this was the best one. I'd forgotten how difficult it is to get a kid to look at the camera. 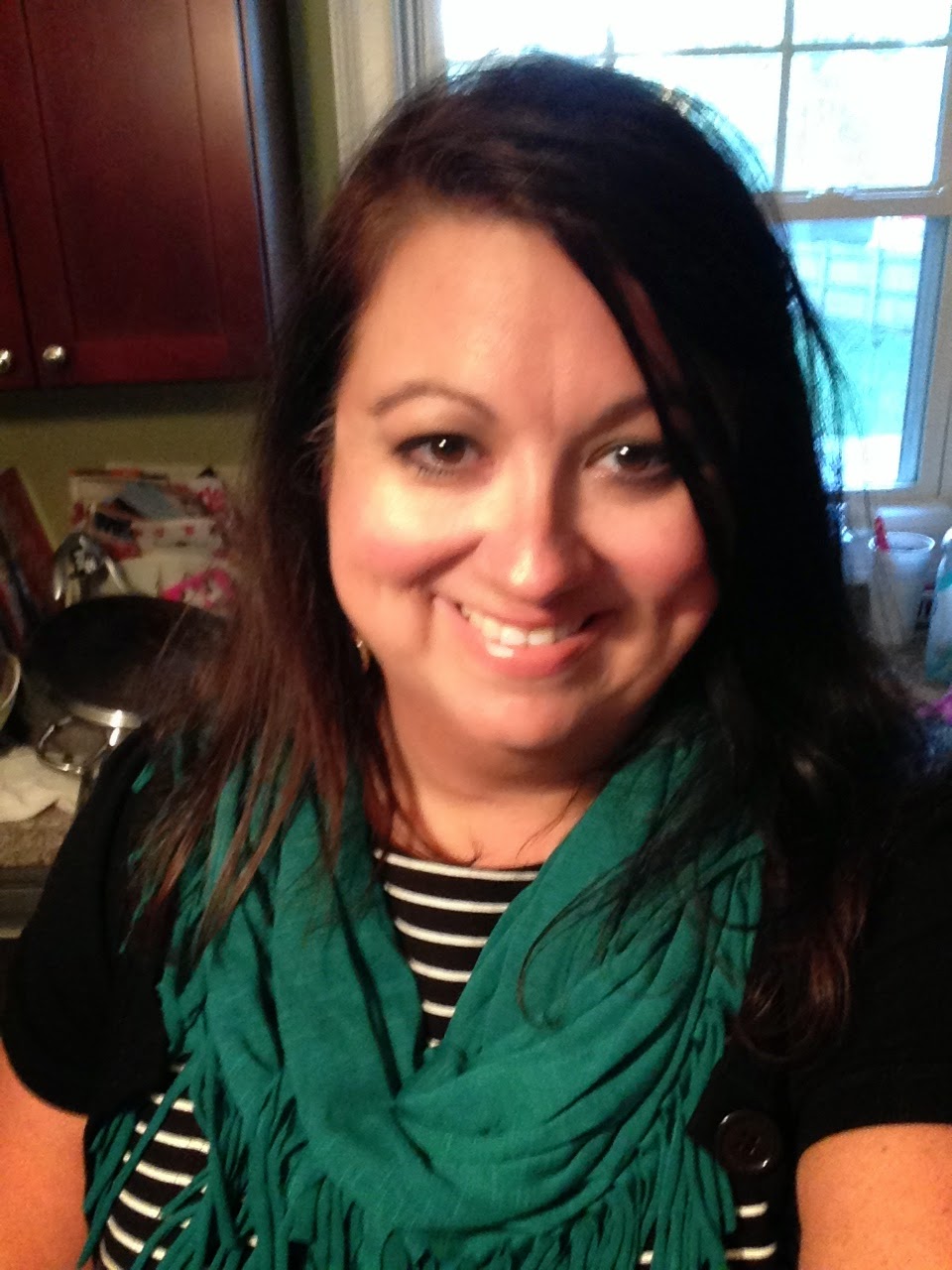 And here I am post-game with a nice glowy tan after sitting out in the sun for three hours straight. That's college football in the South for ya. What'd you do last weekend?