With our 2017 ScrapGals retreat in Nashville quickly approaching, I've been working some on prep for the event. While Tracie handles most of the actual event preparation, I need to prepare my class, my goody bags, and the sightseeing event that I'm hosting prior to the start of the actual retreat.

A couple of weeks ago, I began working on the goody bags for my class. For the Salt Lake City retreat in April, I made little tidbits for people to use in conjunction with my class and just for fun while they're at the retreat. I think I kind of underestimated how much more time and materials that would take for the Nashville retreat because we have 92 attendees versus roughly half that number in the spring. Let's just say this process has not gone as quickly as I had hoped it would. I'm sure I'll get it all done, and I am enjoying what I'm doing as long as I don't stress out about how many more things I need to make. Haha! My plan is to finish making and stuffing the goody bags by Sunday of this week. Fingers crossed! Here's a quick pic of my in-progress goodies... 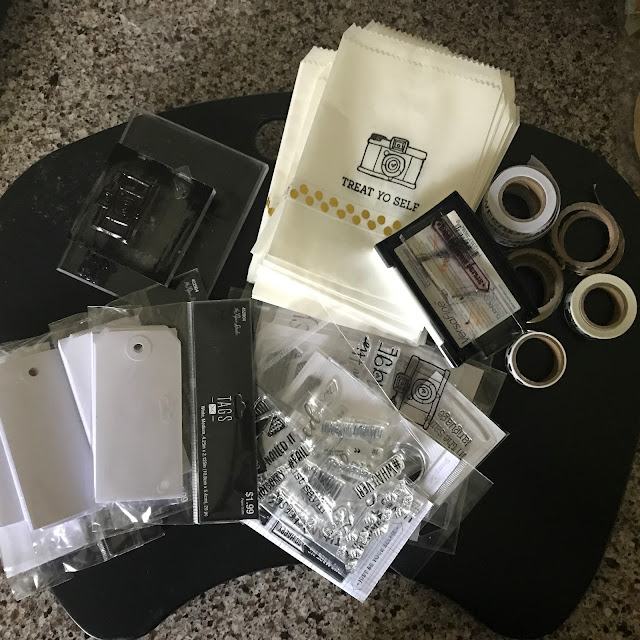 Besides the goody bags, I'm also working on revamping my class a little bit. While it's the same title/topic as the one I taught in Salt Lake City (Selfies 101!), I want to change up the pacing and arrangement a bit as well as include new examples from the last few months. My goal is to also give my students a prompt/sample for a layout they can complete as well. (I really hope I can fit all of this in and make it work because it seems like a lofty goal right now!) I'm giving myself next week to get this done, so I hope I can stay on schedule.

The good news is that I already have the sightseeing events well in hand. I've mapped out our walking tour of downtown Nashville and have already made our lunch reservations for that day. While I love traveling and often take groups of students around Europe, I've never led 40 adults through an American city. The idea is both exhilarating and intimidating! Here's to hoping I can pull off our Friday sightseeing plans without a hitch. :)

I'll check back in after the event with a recap of how everything went, and I sure hope you'll consider attending a ScrapGals retreat next year. In 2018, we plan to host retreats in Grapevine, Texas in April, in Seattle, Washington in July, and in Nashville, Tennessee in October. More information about those will be announced early 2018. I'd love for you to join us in the fun!

Posted by Tiffany Lowder at 9:35 AM