How to Take a Day Trip in Europe

Maybe you're on a trip of a lifetime in Europe and you want to venture to some nearby cities. Maybe you want to go someday. Either way, I think this is a super informative blog post on how to travel by train on your own in Europe.

While you can certainly hire a tour company to handle all the arrangements, it's MUCH less expensive to do it on your own. And I promise it's not that hard. In this blog post, I'll show you step by step how to take your own day trip.

Step 1 - decide where you want to go. I'm a huge fan of TripAdvisor and use their forums frequently. On the right hand side of major city forums, day trips are listed. You can click on those and read about things to see and transportation tips. That's how I've decided where to go on this trip to Madrid. 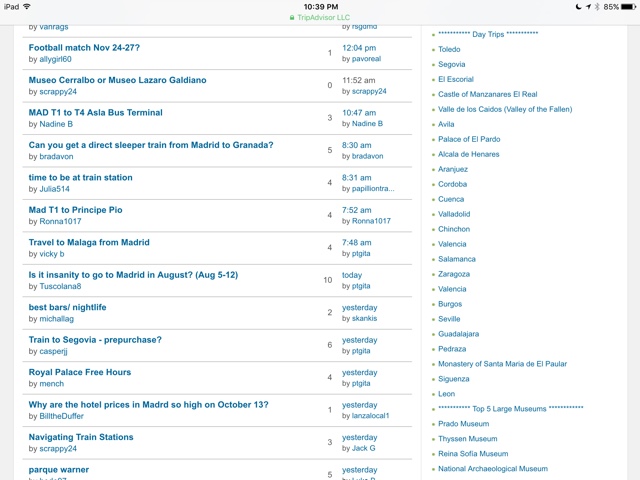 Step 2 - read about the day trip and decide if it's one you're interested in taking. I usually read all of them and then narrow down my choices. At this point, I decide if I want to book through a tour company or not. If it requires multiple buses or renting a car, then I'm likely to go with a tour company instead. Just a couple of weeks ago, I went to El Escorial and the Valley of the Fallen with Viator, a reputable company I've used before. It was roughly $67 for a 5 hour tour that included both transportation and entrance fees as well as a guide - not a bad price but def not cheap either.  Most of the time, I choose to go on my own by train. 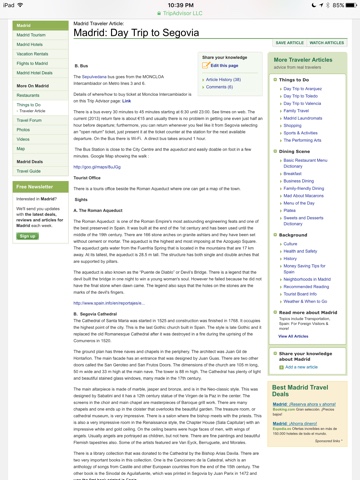 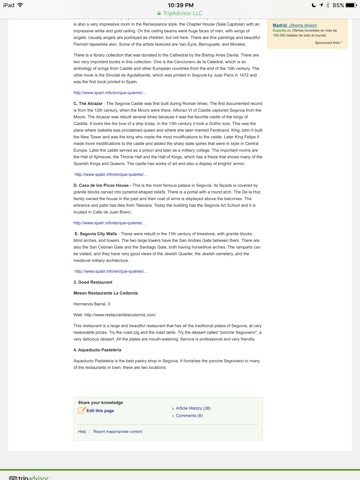 Step 3 - visit the Renfe site. Avoid using third party sites and go directly to www.renfe.com. There, you'll fill in a form about where your departure city is, where your arrival city is, and what day you want to travel. I have not had good luck changing the language of the site on my iPad, but it's no trouble on my laptop. It's pretty intuitive, so don't let that part throw you. Be careful: Europeans use the 24 hour clock, so be sure you understand how much time you're giving yourself for your trip. A 21:18 return trip means you'll leave the excursion locale at 9:18 pm. Also be warned that Europeans write dates differently than we do. July 14, 2016 would show up on your ticket as 14 July 2016 or 14 - 07- 2016. Until I got used to it, that used to freak me out! 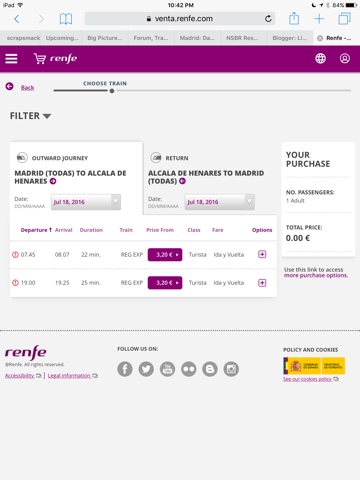 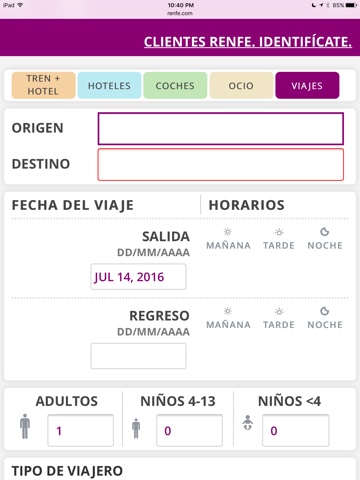 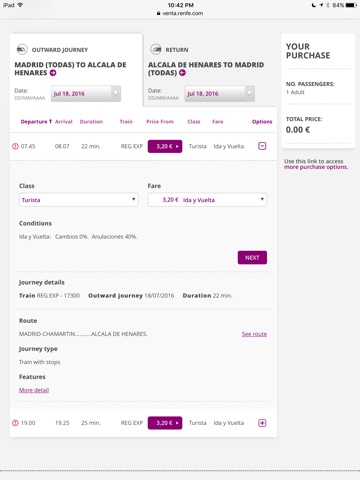 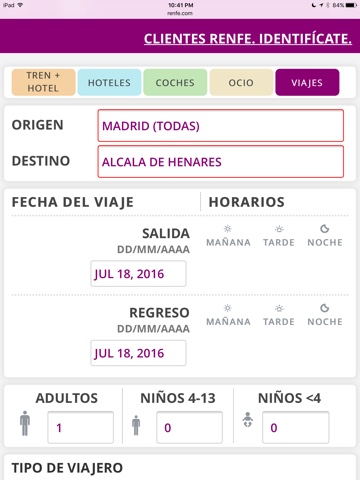 Once you've chosen your departure date and time and return date and time, you'll be asked to enter your personal info and payment info. Note: if you reserve more than 24 hours in advance, you're asked to enter passport info. Otherwise, it's just name and email address. Warning: my credit cards never work for this when I'm in Europe even though my bank knows I'm here. I always have to pay with PayPal for it to work. It didn't used to be this way, so I think this is a new anti-theft measure by Renfe.

You'll get an email showing your price and payment conversion/total information. Keep this for your records! 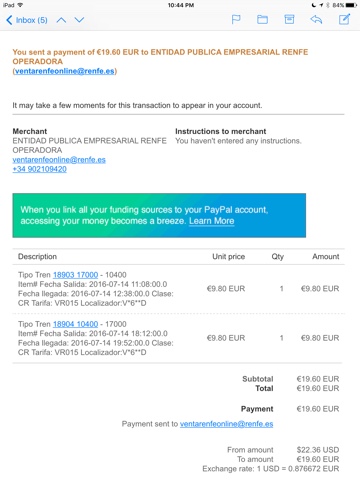 Step 4 - make sure you can access your confirmation email when you get to the train station. If you're worried about data charges, open the email in wifi and take a screen shot of it. That's it for the part you do ahead of time! 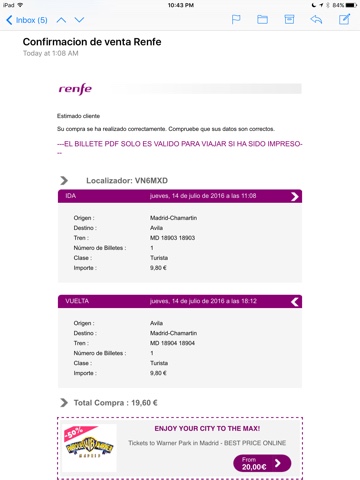 Step 5 - go to the train station. I usually use a metro app to help me get from point a to point b. There are three kinds of train stations essentially - metro lines, cercanias or commuter lines, and Renfe or city to city lines. The same station can have all three kinds of lines! Look for the section labeled Renfe and go to that section. (In general, Renfe lines info and registration are 2-3 levels above ground with departure gates at ground level while metro and commuter lines are 2-6 levels below ground.) If you have trouble, ask either a transportation worker or a security guard/policeman or a sanitation worker for directions - they'll all be in uniform. It's pretty simple, even for me in Spanish to say, "Perdon, donde esta Renfe tren?" It's not grammatically correct per se, but it's understandable. You could look up the sentence in the language of the place you'll be visiting.

Step 6 - look for the Renfe ticket machines. There are different styles/colors depending on where you are, but this is a common setup. Approach a machine, touch the screen to activate it, and select your language. I almost always have the language option, but it's not super hard to do this in another language if you're patient and have a translator app on your phone. (You can also buy tickets here, but you're an overachiever and already did that part at home!) 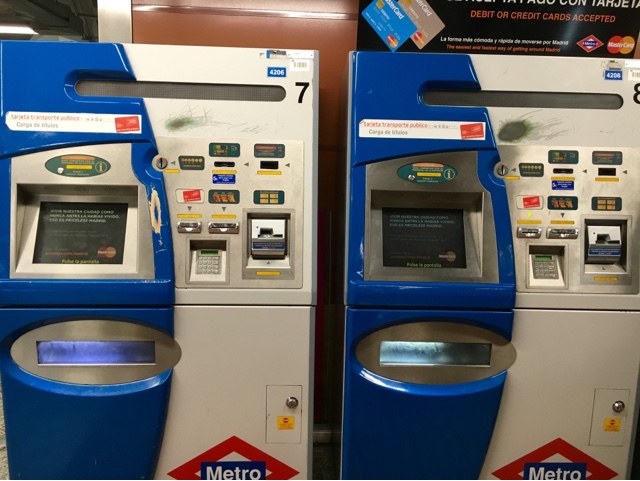 Step 7 - follow the instructions on the screen to print your tickets. Remember the confirmation email from earlier? You'll need to find the reference number on it for your transaction. In my example, it's labeled with something that looks like 'localizidir.' Enter that string of letters and numbers to pull up your transaction, select print, and wait for the machine to spit out your tickets. If you booked a round trip, you should get two tickets per person. Here are my tickets for a recent trip. Notice that each ticket has the date, time, train number, and seat information for my reservation. Keep these safe and handy! 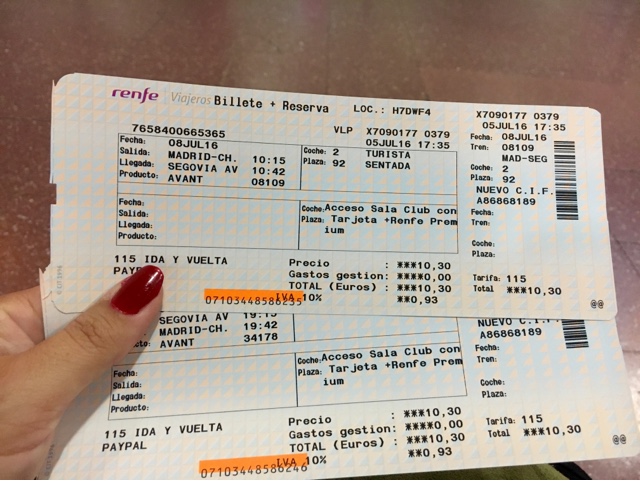 There are Renfe employees who can help if needed; I snapped a pic of them working on a machine. Because you ordered your tickets online and printed them at the station, you don't need to stand in any lines or wait for a worker. 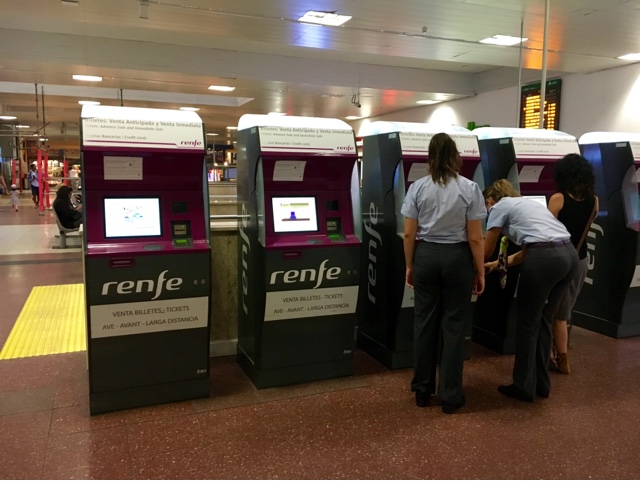 Step 8 - determine your departure lane. Notice how there are numbers at ceiling level indicating different lanes? Now you have to figure out where your particular train will be departing from in the station. 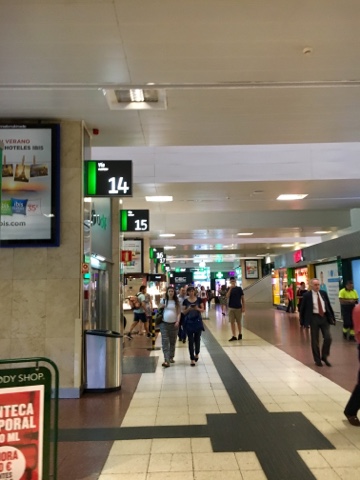 There are electronic boards posted around the station that indicate upcoming trains and departure gates. In these two pictures, the top train is the one I'm taking. See how the top one says Segovia-Guiomar and the bottom one says Valladolid? You have to be careful because most trains are listed by their final destination. In this case, i was going to Segovia, but the last stop on the line is Valladolid. How can you be sure? Check three things - the departure time should match exactly (10:15 here), the type of train (Avant in this case) should match, and so should the train number (08109 in this case). Because those match my ticket, I know I'm looking at the right train. About 30 minutes before departure, the gate number will also be revealed. At that point, find the escalators for that number gate and head downstairs to ground level. 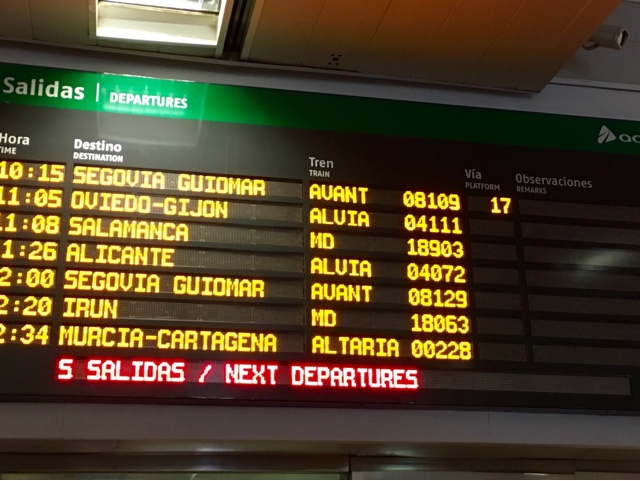 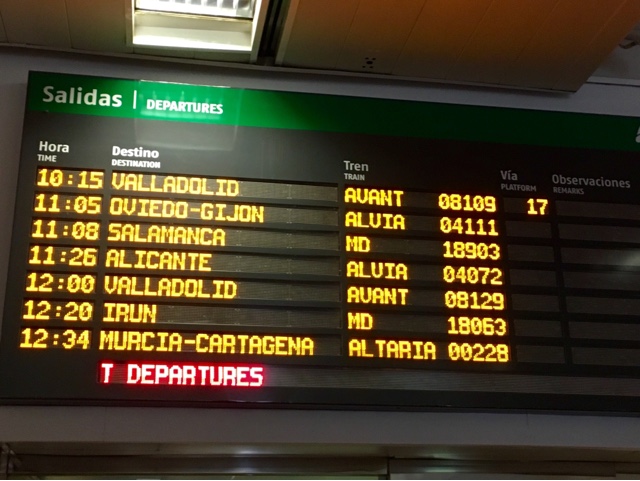 Once you're at your gate, follow the numbered signs to be sure you get on he right train. 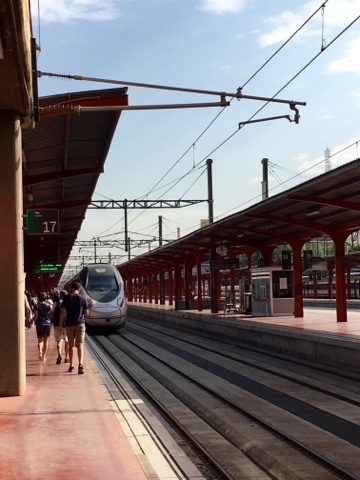 Here's where it can get confusing. Sometimes, there's security that scans your ticket and screens your luggage but usually not. (Kind of scary that they don't do this more, actually...) Other times, there are ticket reader machines that will read and/or punch your ticket prior to boarding. This is super common in France and not doing it can result in a 100 euro fine if the conductor catches you. Occasionally, you'll get right on the train and a conductor will come by to physically inspect and mark/punch your ticket. That's how it has been in Spain thus far. Just watch other people and do what they do. I think businessmen are good to watch bc they travel this way so frequently. 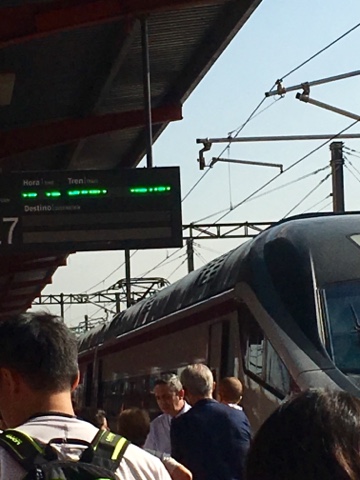 Step 9 - board the train and locate your seat. Look at your ticket again. First, find the coach designation and look for that on the train exterior. Sometimes it's painted on, and sometimes it's electronic. I knew I was in car #2, so I got on board there. 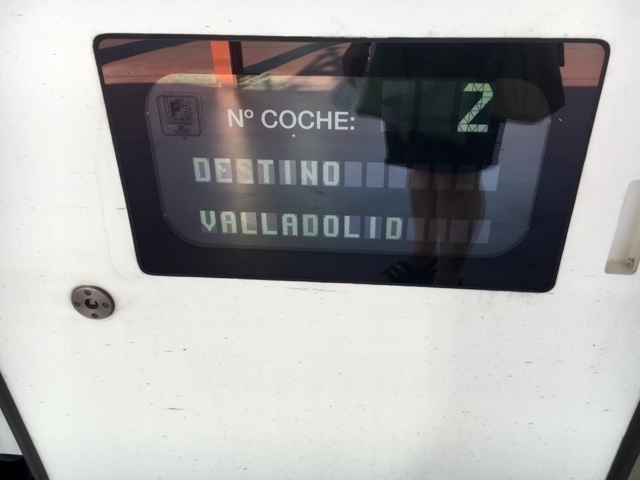 Seat numbers are indicated as you enter the car to the left or the right and also at each row, kind of like an airplane. It does help to know the word for aisle or window in the language of the country where you are. In Spanish, I knew ventana was window and passir was aisle, so 98p on my trip to Avila was the aisle seat in my row.

If you have rolling luggage, there is shelving at the car entrance for that. Carry on sizes can be stowed on the rack above your head. Seats are plush and roomy with nice leg room. Some seats even have tables. Do be warned that not all seats face the same direction. The train leaves right on time and edits for no one; leave yourself plenty of time for boarding. 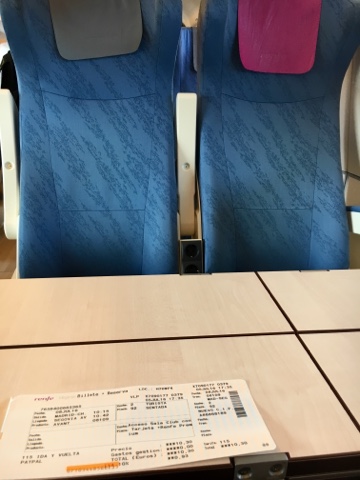 Trains have air conditioning and many have individual light controls and even electrical plugs for charging your devices. I haven't been on any that offer wifi though the stations in big cities usually have free wifi. All trains have restrooms and many have either a cafe car or snack machines. 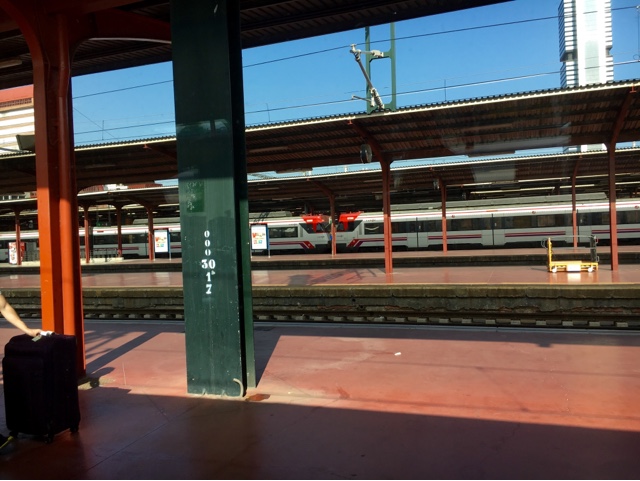 Trains also have screens that share info about upcoming stations, time, temp, maps, etc. Verbal announcements are made at each station in the language of the country where you're traveling. Big cities often also repeat announcements in English but not always. (High speed trains are the best! This one to Segovia reached a max traveling speed of 285 kmph!) 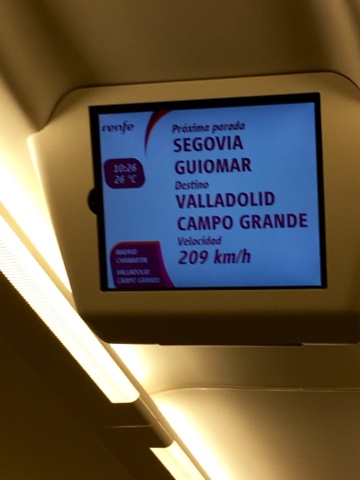 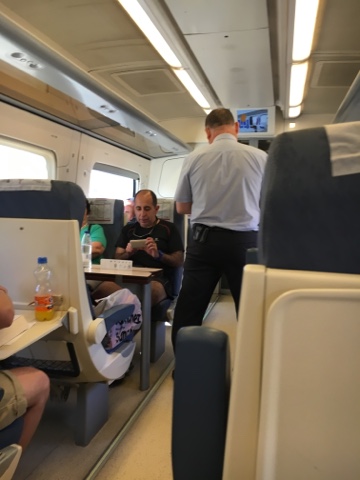 Step 10 - have a plan for getting back to the station. Some stations are right in the middle of town, but others are pretty far outside the city. Knowing this in advance is a good idea. 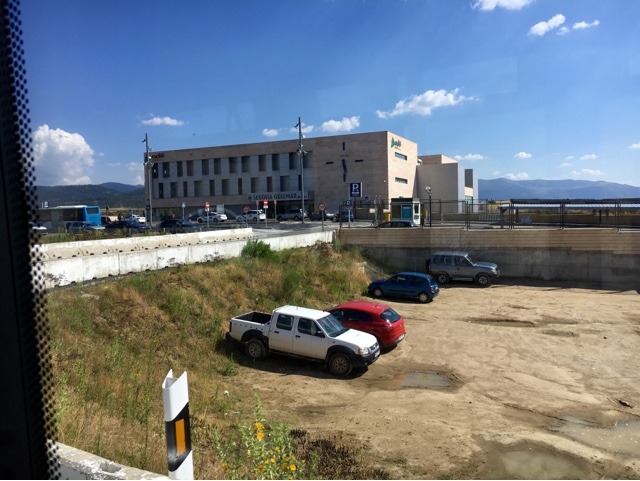 As you exit the station, you'll prob encounter taxis, buses, and potentially trams. Unless you're a group of 4-5, a taxi is generally pretty costly. My recent taxi trip from this station to the alcazar in Segovia cost me 9 euros! A bus is a much better option. I took the bus back to the train station for 2 euros! Just ask the bus driver as you get on if it's going to centro or the specific site you want to see first. Look this question up ahead of time bc most bus drivers do not speak English in my experience. Worst case scenario is you take the scenic route, right? 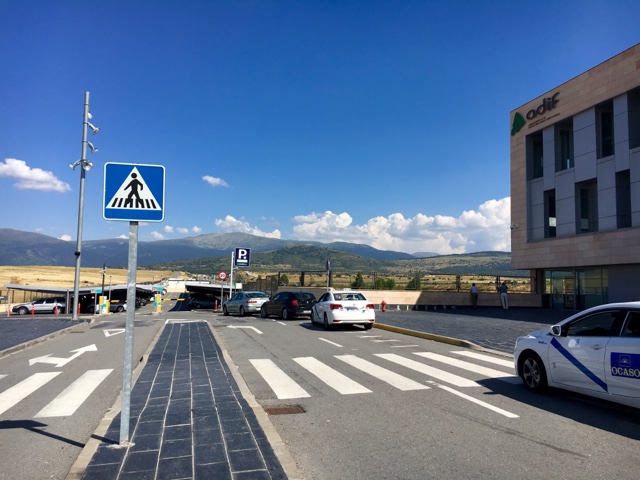 Some small towns have tiny stations, but they're set up the same way as the ones in the big cities are. 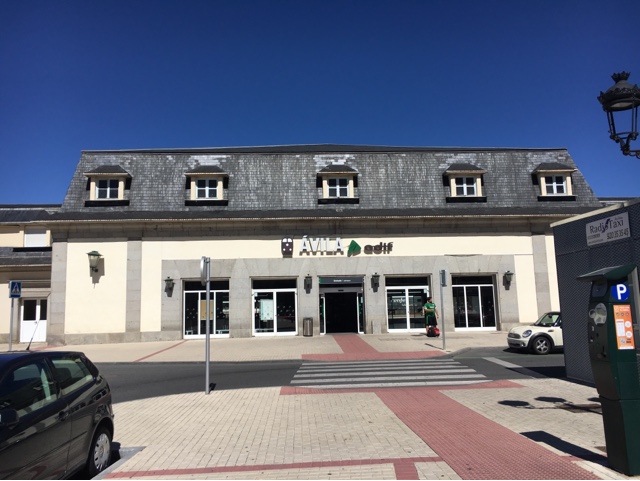 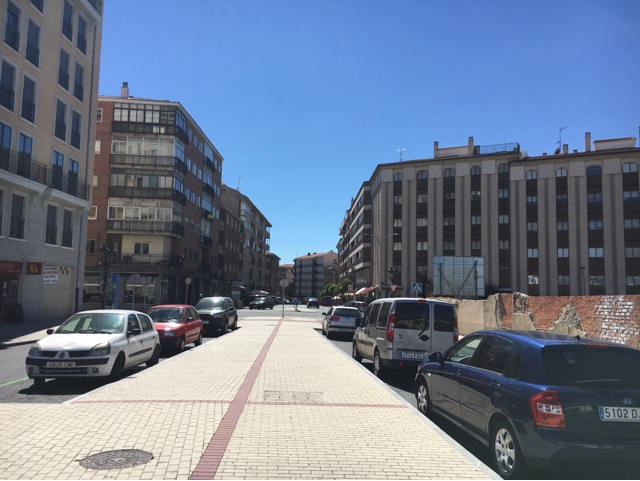 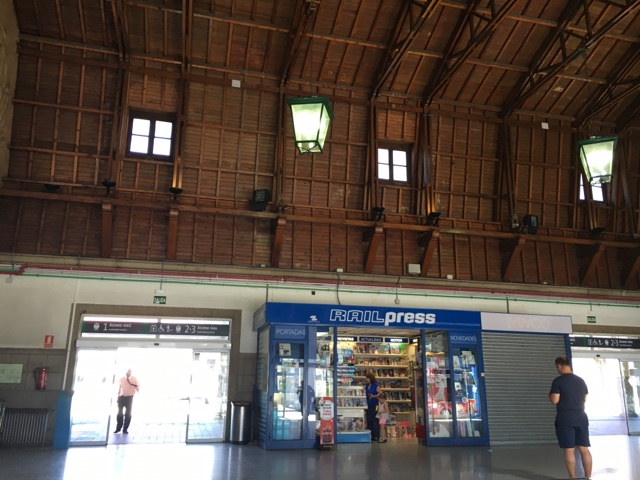 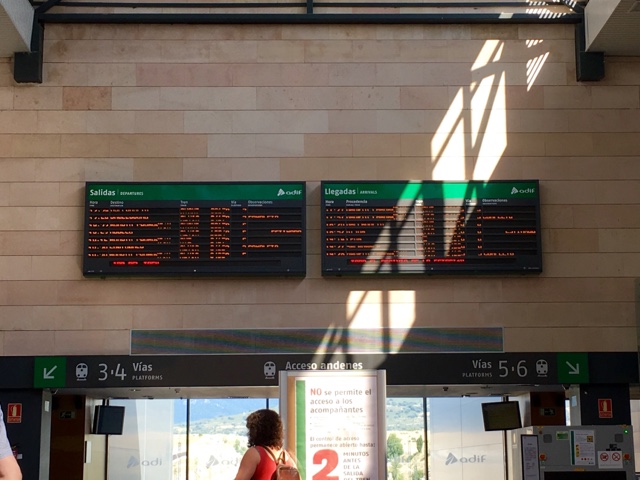 That's it - 10 steps to taking your own European day trip by train! I love traveling this way and encourage everyone to try it the next time you travel abroad.