If you follow me on facebook or have been in our facebook community recently, you probably already know that I've been a bit under the weather this week. As a result, I've been craving comfort food, specifically soup. While I'm sure to survive this sinus infection and nasty cough, a good, hot, soup seems to do wonders for me while I'm trying to mend.

Here's the recipe to the corn chowder with shrimp that I made yesterday after I got home from work. It's a pretty economical dinner option, especially since it will feed me several times. I've never tried freezing it, but that might be worth trying at some point. I do have a tendency to get sick of leftovers before they're all gone. Lol! I didn't come up with the original recipe, but I've tweaked it over the years and have made it my own. I couldn't tell you where I originally saw the recipe - sorry. This soup was easy and delish, so I definitely recommend that you give it a try. :)

In a large stock pot, melt butter on medium heat.
Put bacon in a single layer of a jelly roll pan in the oven at 350 for 20 minutes or so.
Add seasoning mix and saute until tender, scraping up bits with a spatula/spoon as you cook.
Add bags of hash browns and corn. (If you're including frozen mushrooms or diced carrots, do that now.I love the mushrooms in it, but I'm not really a fan of carrots unless they're uber tiny.)
Cover mixture with chicken broth and cook on medium until no longer frozen.
Once veggies are no longer frozen, add spices. (I don't really measure for this dish anymore, but I'd start with 1/8 tsp salt, 1/2 tsp black pepper, 1/4 tsp red pepper, a sprinkling of parsley, and a dash of thyme. You can always add more later, but that will give you a good start. Some people really like a bay leaf for the depth of flavor, so add it at this point if you're a fan.)
Bring to a rolling boil, then turn heat down to low/medium (a 4 on my stove)
Add pint of heavy cream and stir until it is well combined.
Rough chop the bacon and add to the soup pot. (Sometimes I add a touch of bacon grease for flavor; I know that's soooo bad.)
If you don't think the soup is thick enough at this point, mix melted butter with flour to create a roux and add it to the pot. Personally, I don't do this, but I know some people really like thick soup.
Add frozen shrimp to the pot and cook on medium until no longer pink. 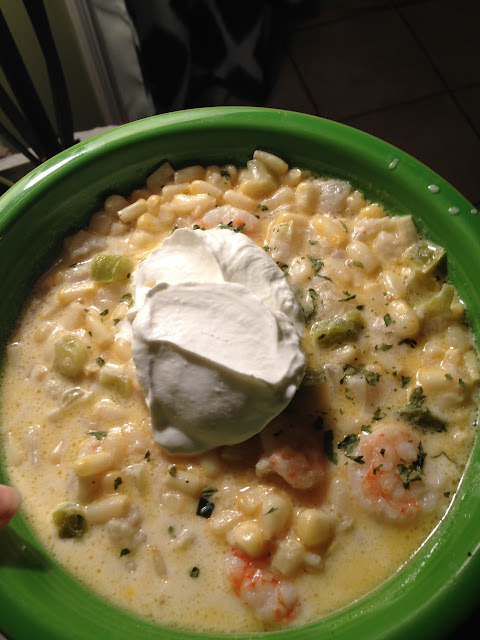