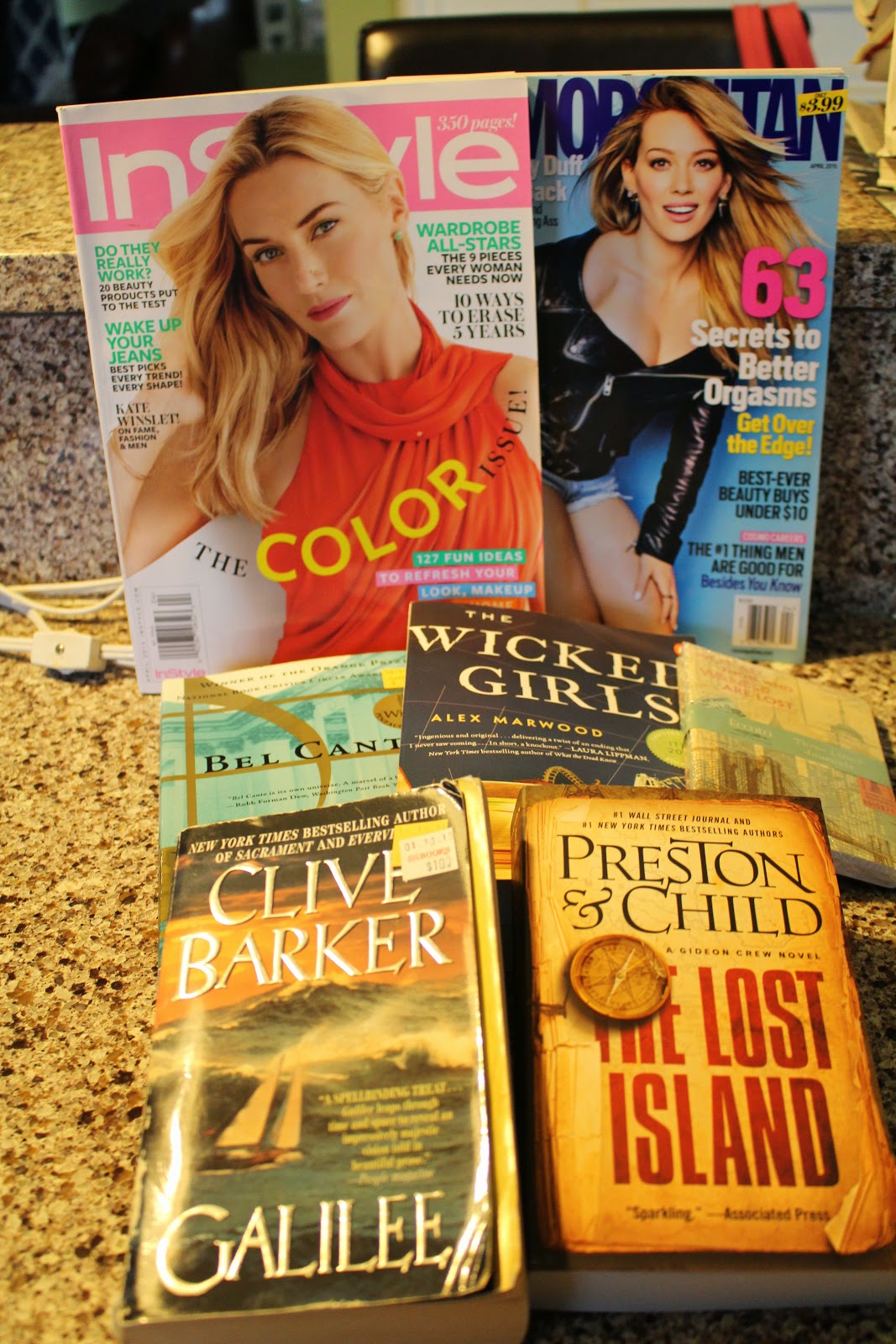 This is the collection of reading I took with me to Mexico a couple of weeks ago. Yes, I overestimated how much reading I'd do in a week, but I always like to have options.

I read the magazines at the beach and enjoyed them even if I realize I'm much more InStyle's demographic than I am Cosmopolitan's. Oh well... I had already resigned myself to the Glamour ship having sailed a few years ago.

Galilee is an old favorite that I hadn't seen in print in at least a decade. While I'm not a fan of Clive Barker per se, too violently graphic oftentimes, this book is just wonderful. If you've never read it, you might want to give it a try.

I picked up Wicked Girls and The Lost Island on a last-minute trip to Barnes and Noble right before we left for the trip. Wicked Girls is about a terrible event that two 11 year old girls were involved in and how they've attempted to rebuild their lives since that time. It was a rather dark book, probably not something I'd choose for vacation in the future but definitely worth taking the time to read. It was rather English in terms of language and setting, so do be aware of that. I frequently enjoy Preston & Child books, and this one was no exception. Since it was set on a Caribbean island, and I happened to be on one while reading it, I think that added to my enjoyment of it. While the plot line was a bit predictable, it was still entertaining; basically, it's the book version of going to see one of your fave action movies.

I didn't get around to reading Bel Canto, but I also read Mara and Dann by Doris Lessing. She won the Nobel prize for literature for it apparently, so I felt rather literary while perusing it on the beach. Again, it's probably not a book that I'd read on the beach again - it was much too deep for that, but I did enjoy the story. It's essentially a futuristic post-apocalyptic book about a brother and sister making the trek out of a drought stricken sub-Saharan Africa that reads much like The Clan of the Cave Bear but set roughly 10,000 years in the future. A fascinating story, certainly, but not the light reading I usually prefer on vacation.

At the moment, I'm not really actively reading anything, but I plan to remedy that this week. I think I'll step back into my Paris reading list asap. What are you reading right now?