Snow in the South? Um, nope, thanks though 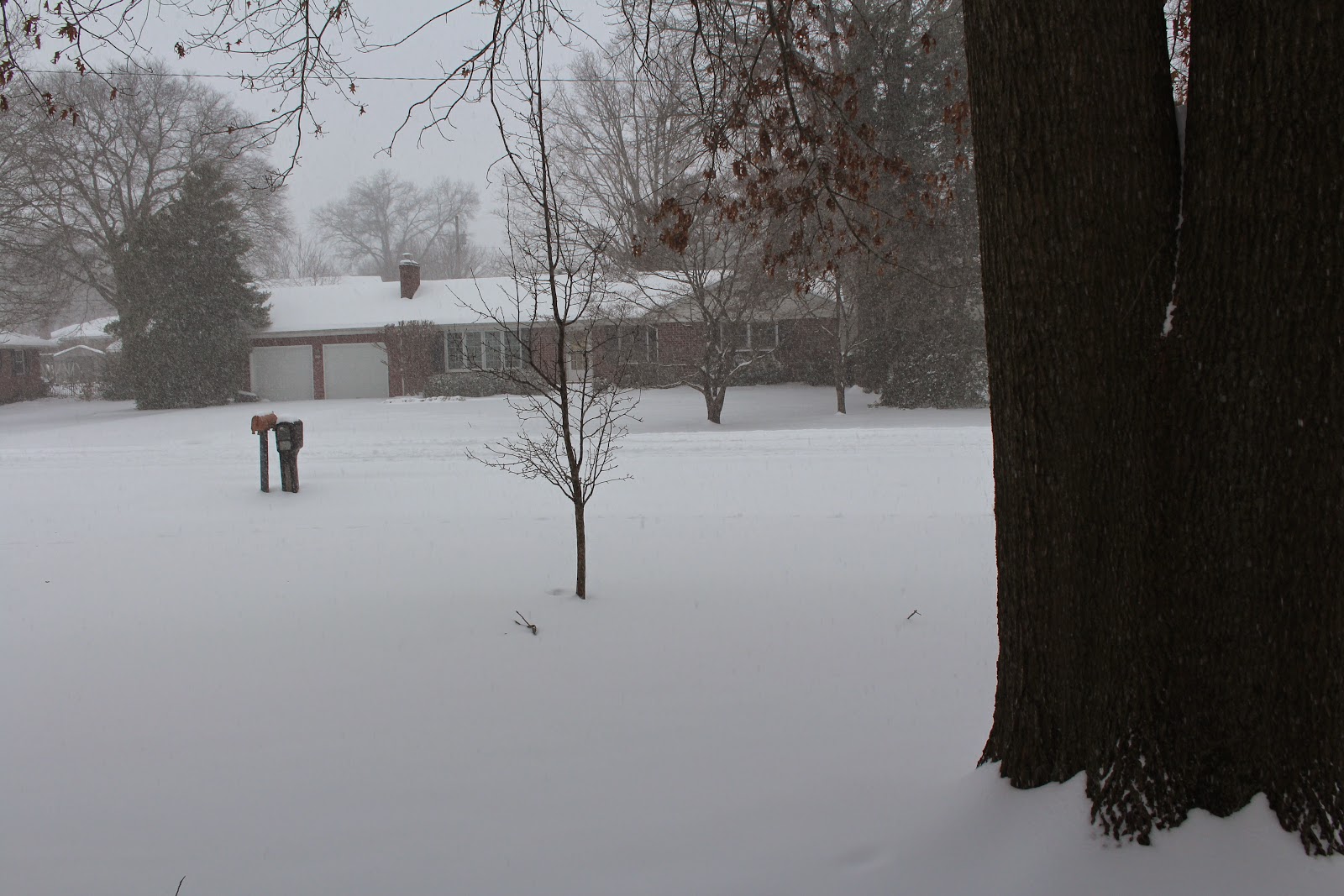 We do not get much snow in Kentucky; this snowstorm, in fact, has beaten all the records held here since 1968. The official snow depth at the airport (about a mile away) was over a foot of snow.  Yeah. Here's the view from my front door as of Monday afternoon. I thought y'all might like seeing a little bit about our storm and how I've managed during that time with the pups.

Here's a view of my patio set from the back door. Isn't the happy umbrella incongruous with the weather happening here? It kind of makes me laugh. 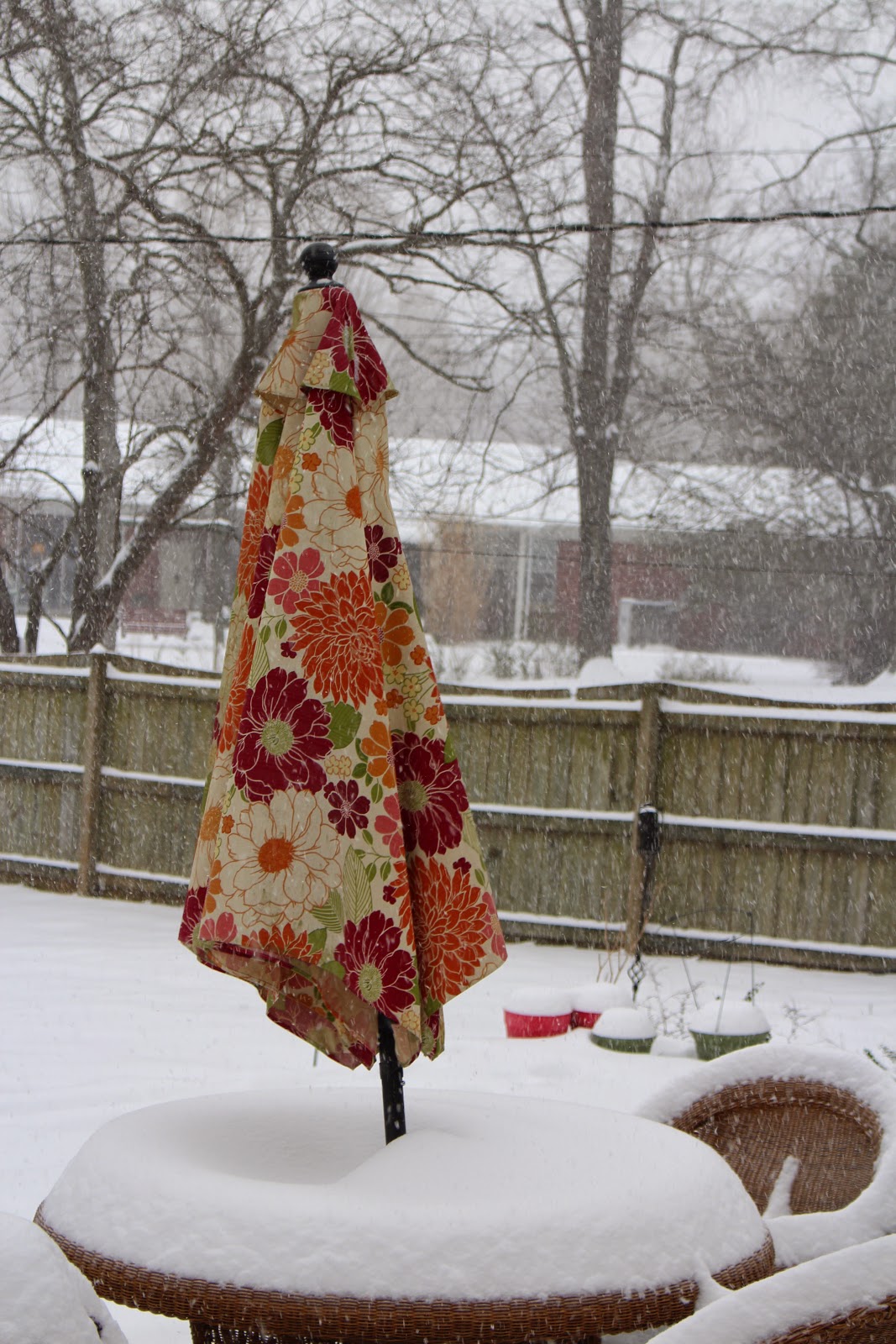 Another view from the front door looking down my street to the left... 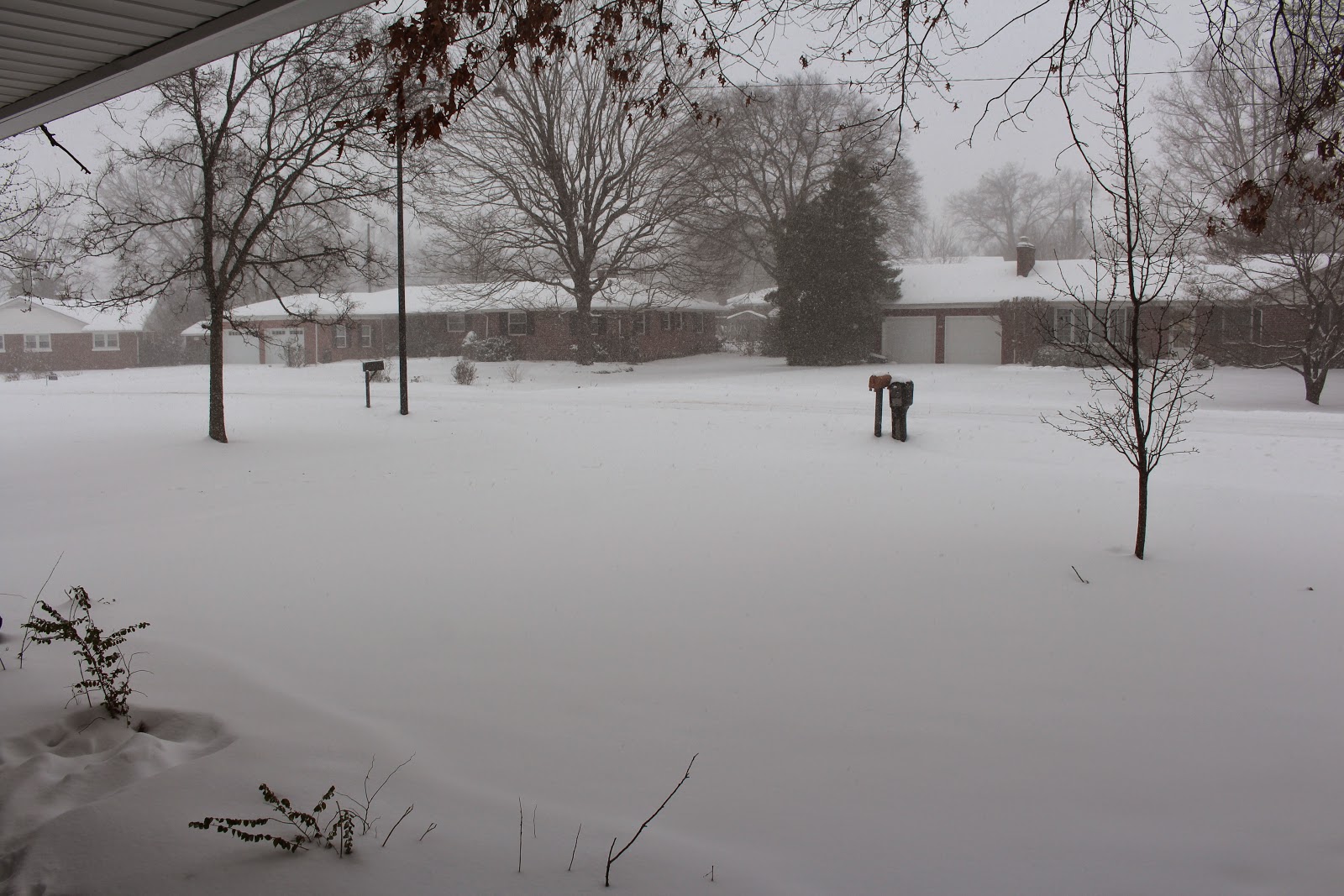 And here's a view toward the slight right - it snowed for about 15 hours straight Monday. 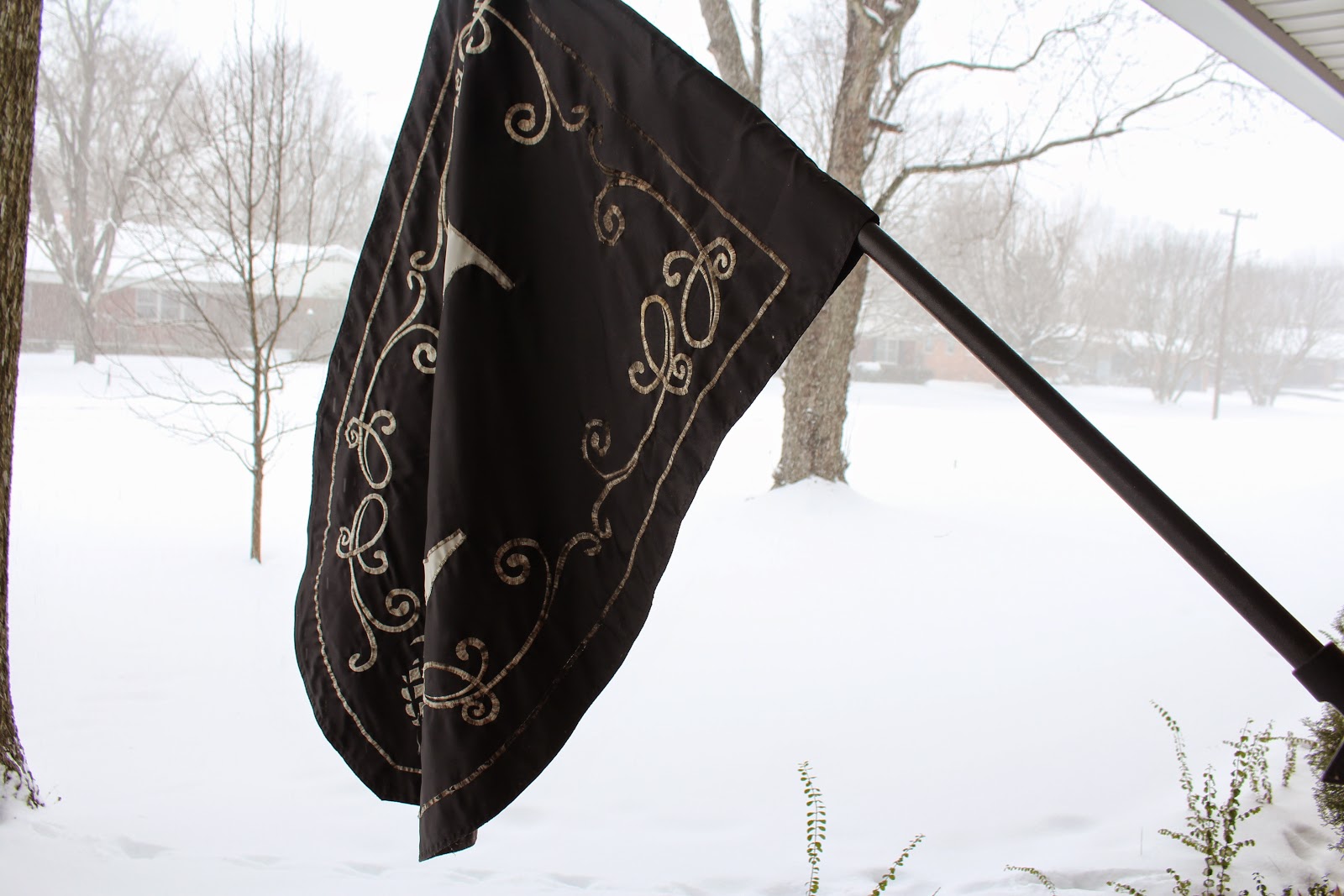 Charlie-dog didn't want to get his feet wet in the snow, even though he kept coming out of the doggie door in the back. 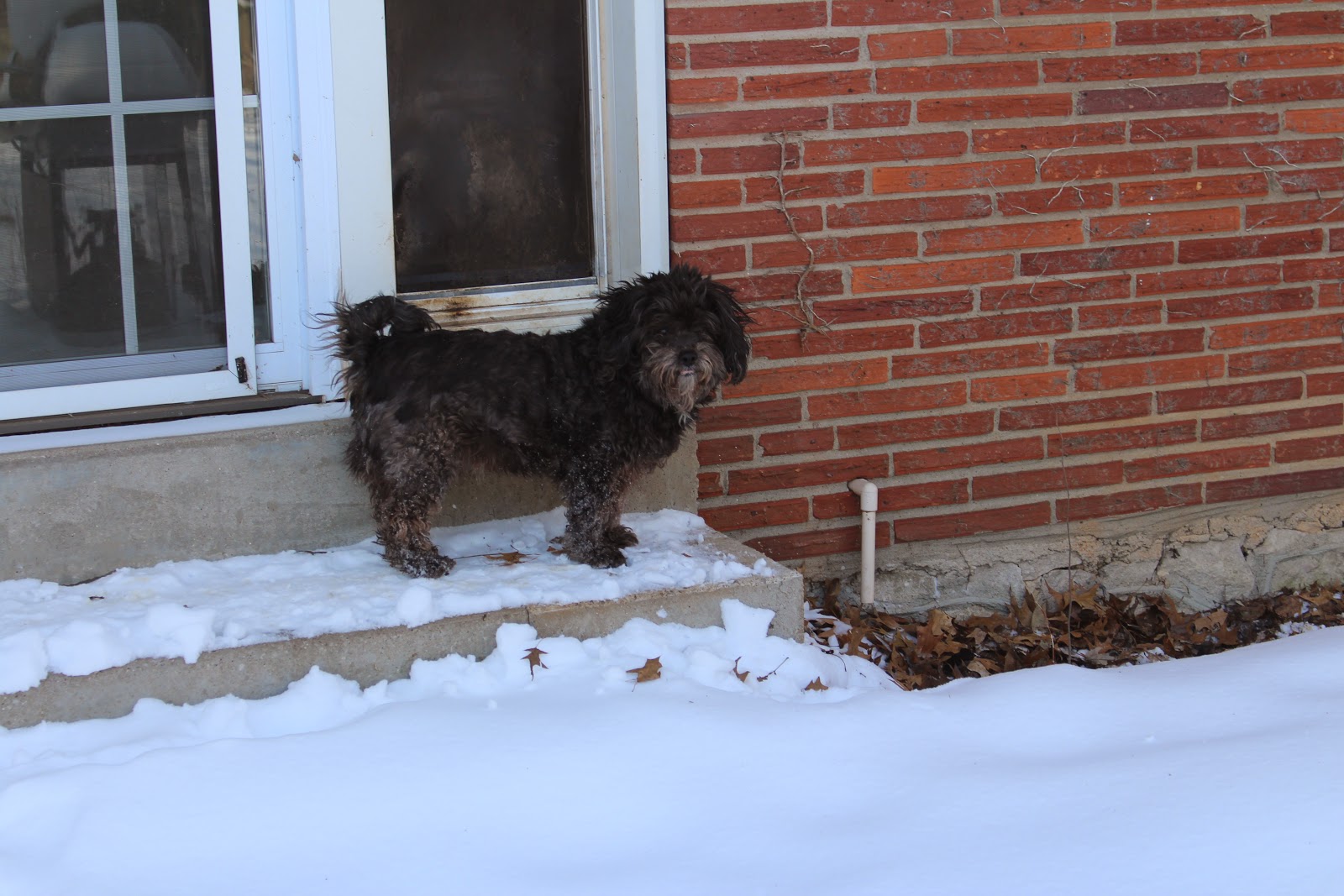 There was a tiny path where the overhang of the gutters protected the dirt. Charlie-dog trekked that path to use the restroom and avoided wet feet in the process. 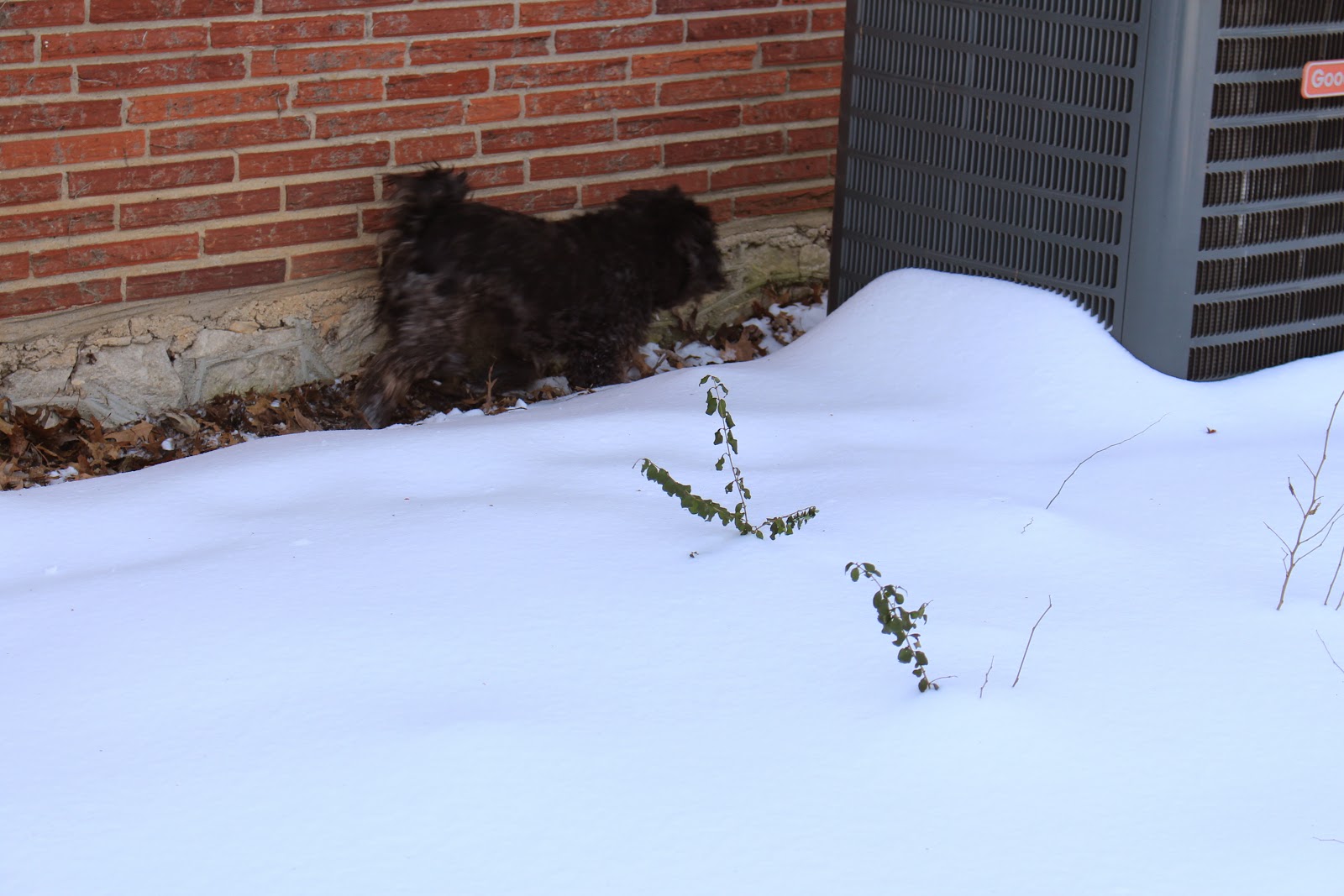 Apparently, one of my flowerpots fell off the patio during the weekend; it's the extra large size from WM or Target - notice the snow is deep enough to almost bury it completely. 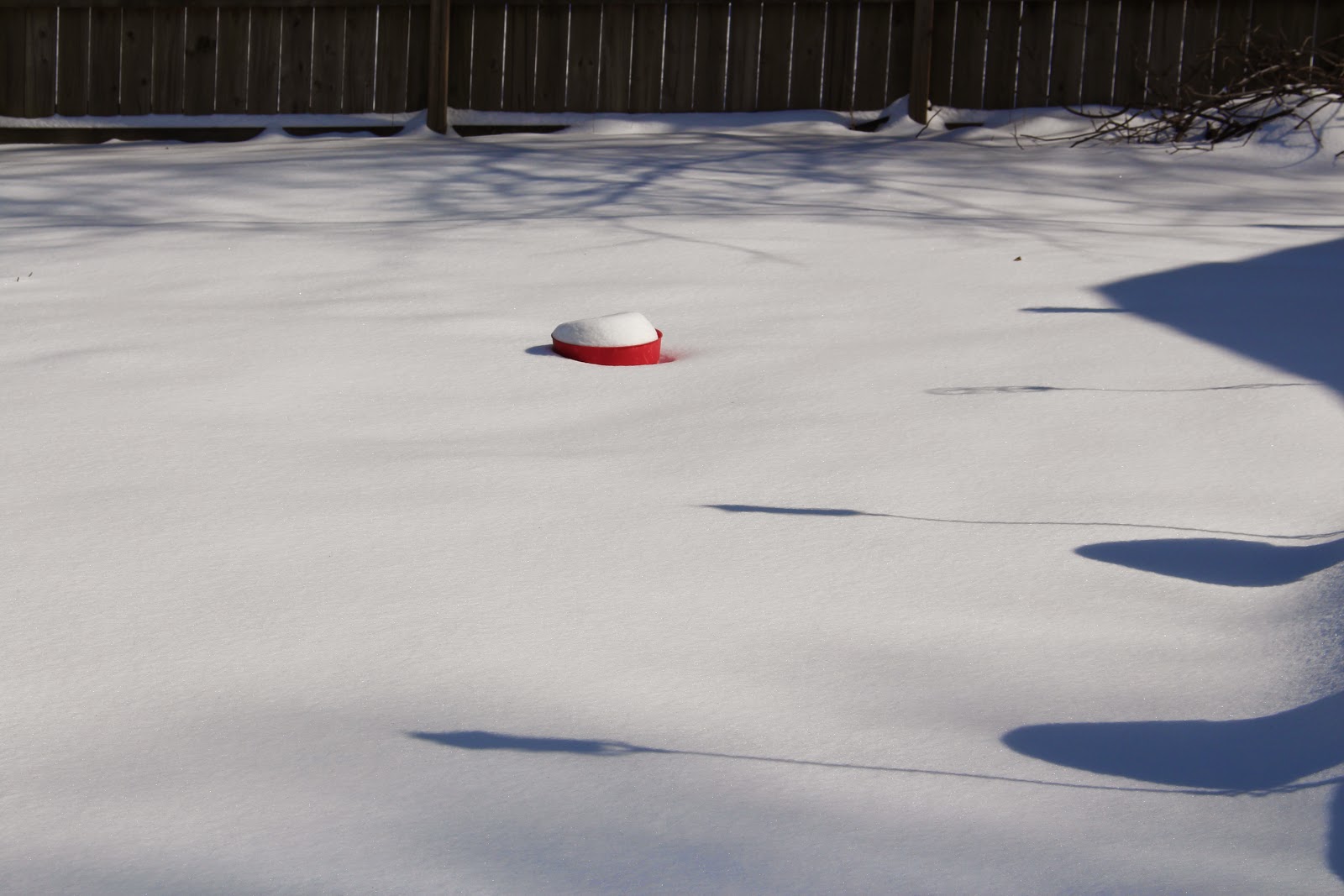 Here's a side view of the patio. I tried throwing the ball to entice Charlie-dog to come play in the snow with me (mainly so I could take pics), but he wouldn't comply. He looked at me like I was crazy... 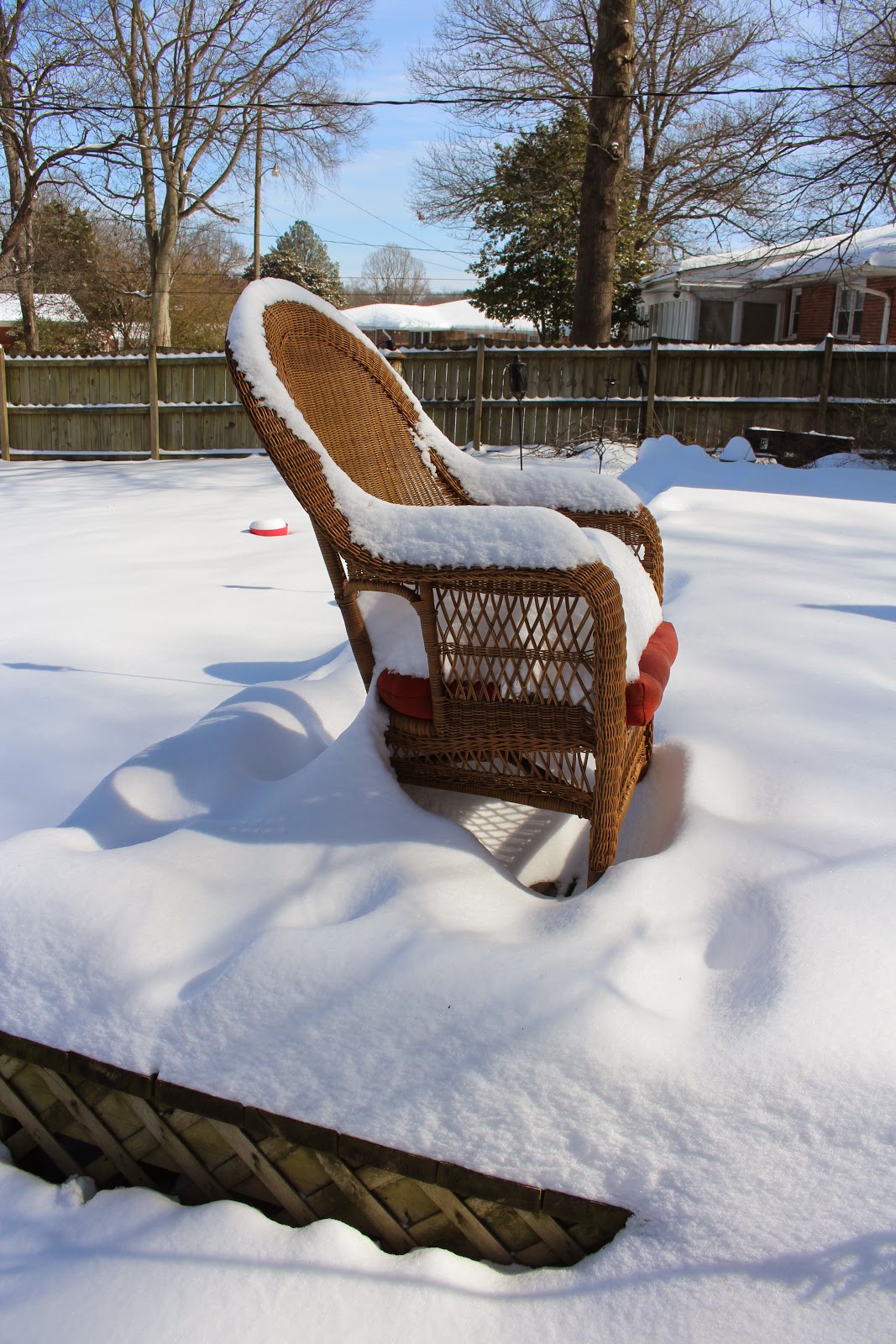 Yeah, he was ignoring me basically. Lovely side view of the grill here with snow mounded atop of it. 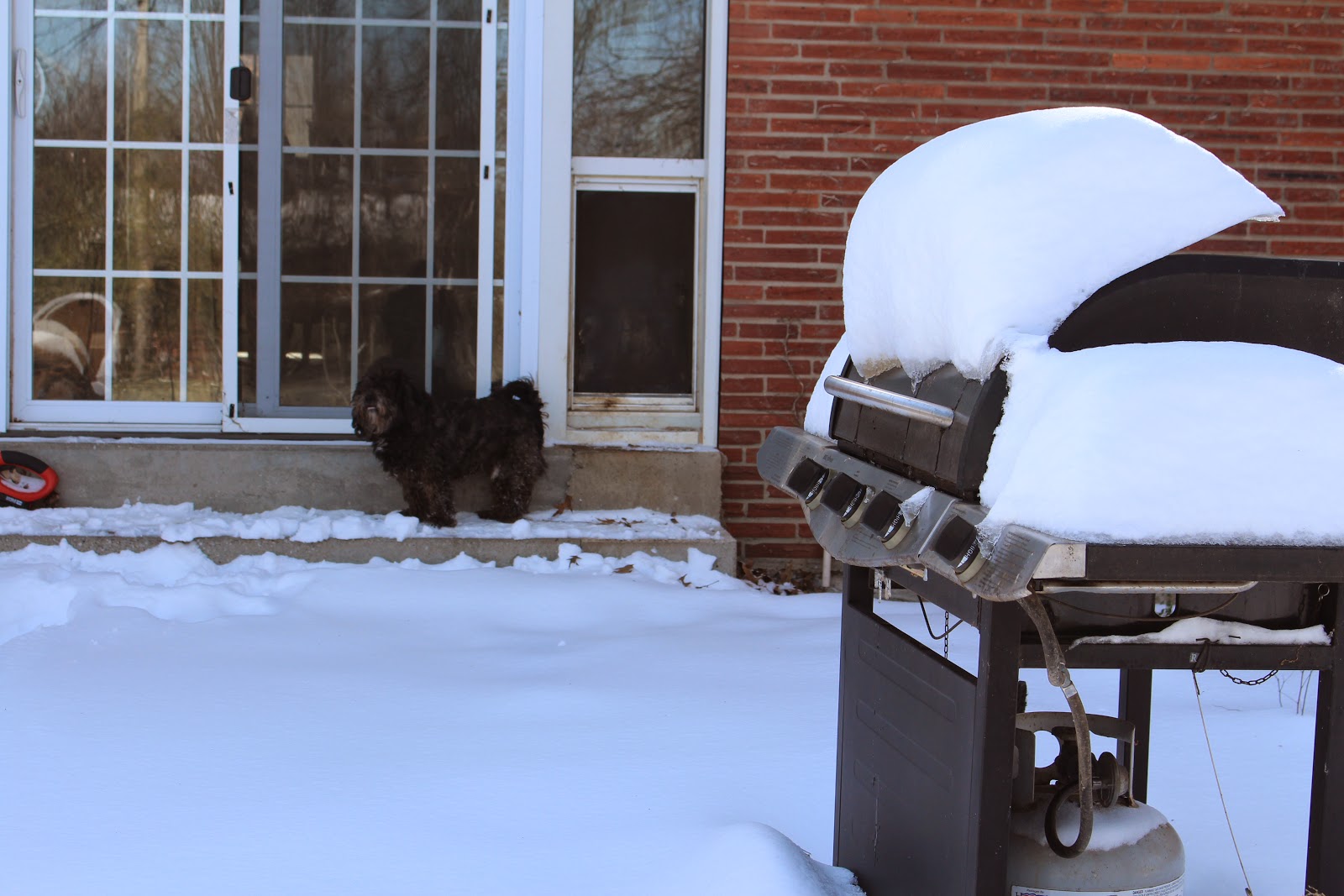 Notice that you cannot see the road at all. Not even a hint of blacktop. Idk what made those footprints since I hadn't been out yet. Maybe a giant squirrel? I shudder to think of it. 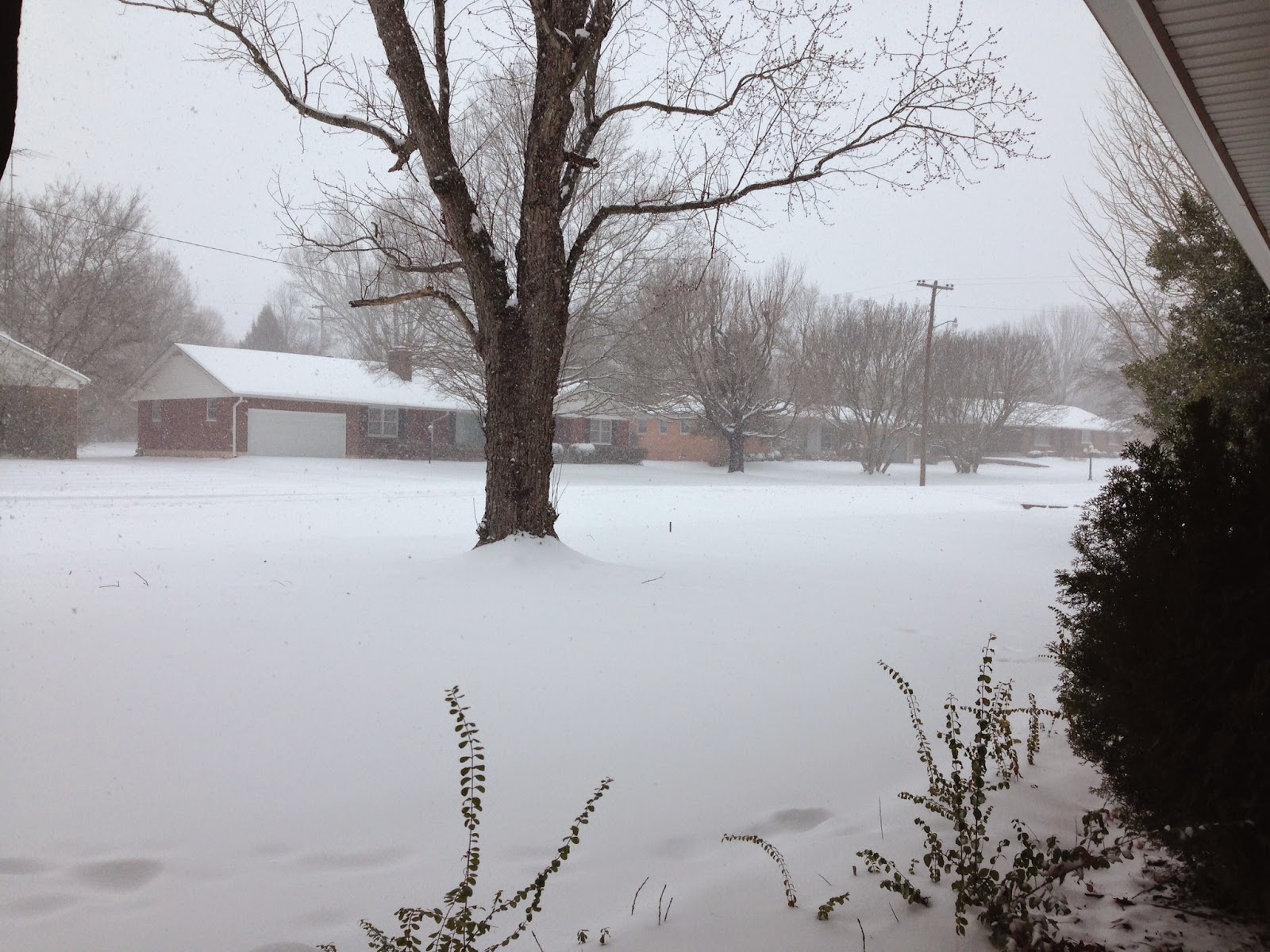 I quickly realized that Lowder-dog would not be going outside willingly unless I let him go out the front door. Adapting to the situation like a champ, he found a bit of a plant as a place to do his business. Notice he does not look happy. This was actually early in the day Monday; as the day progressed, he couldn't go to that spot anymore because it was over his head! 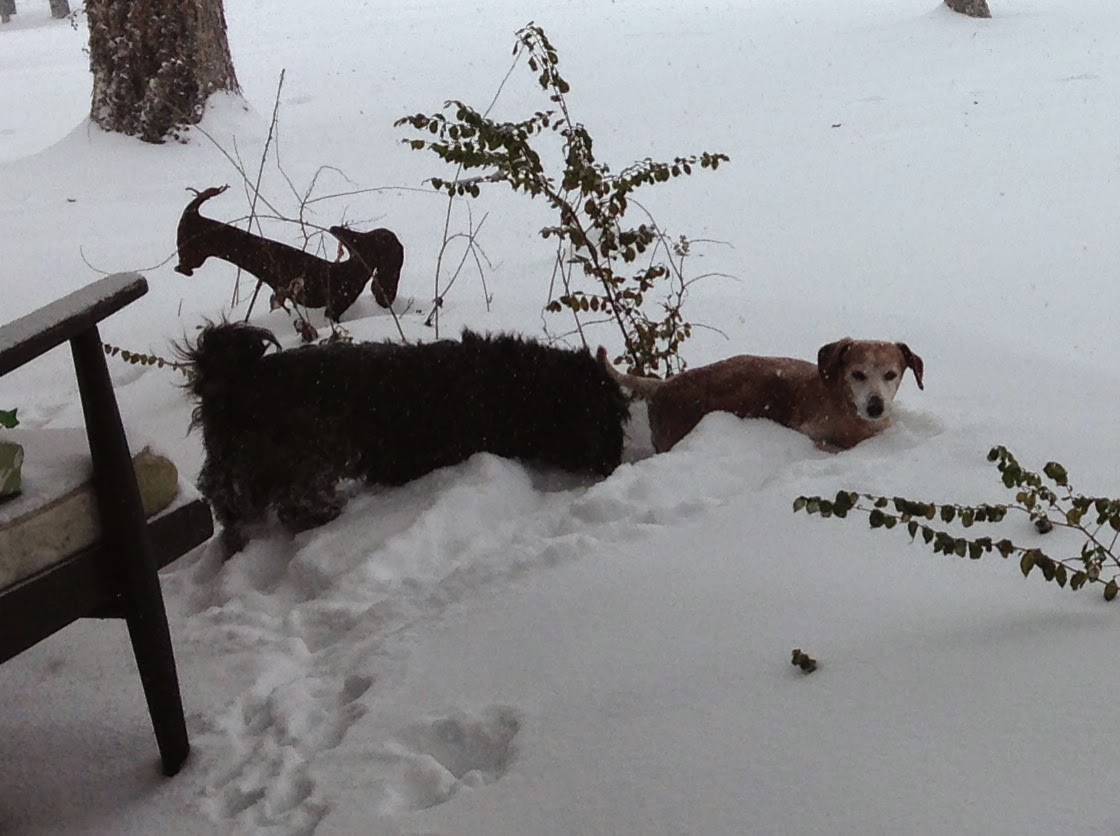 Ignore the snowflakes and wet nose prints on my glass and look how cute they are! I had shut the front door to keep the house from getting too cold, and they panicked at the thought of being left outside. As if! 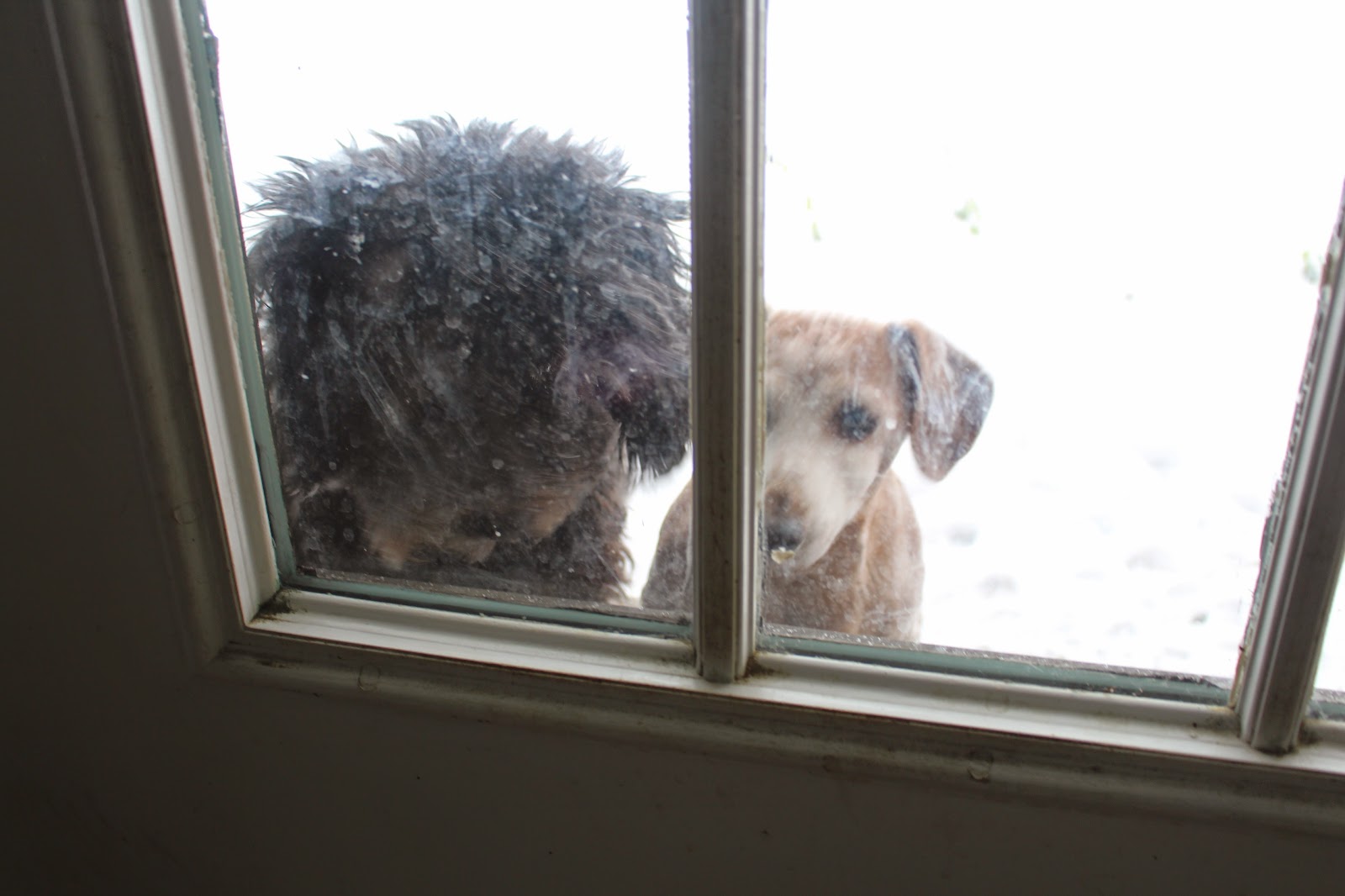 Here's a shot of the backyard on Tuesday morning. Notice the drifting of snow as the wind had been blowing rather hard. 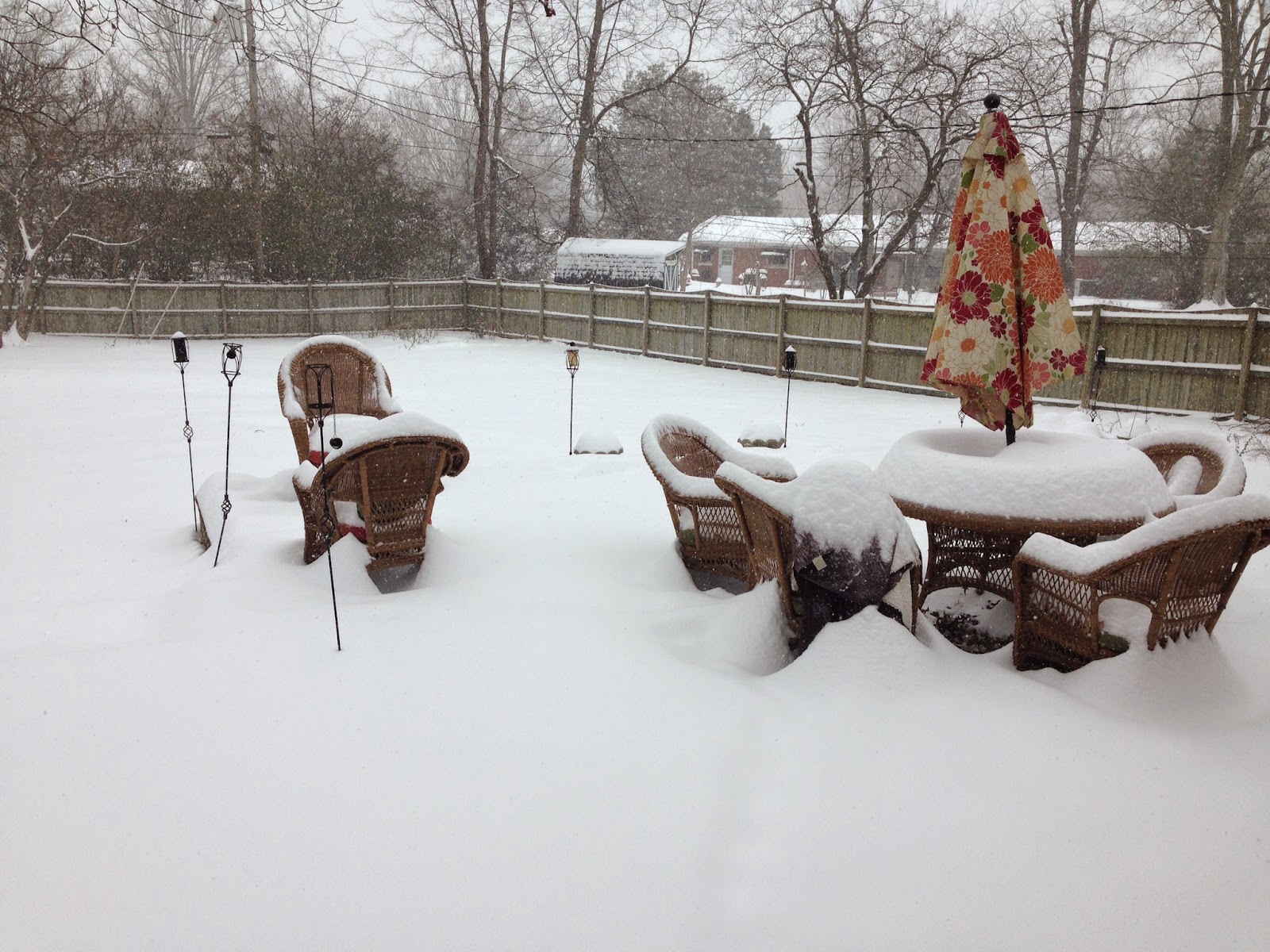 Tuesday morning shot of my road. Again, I don't see any asphalt; do you? 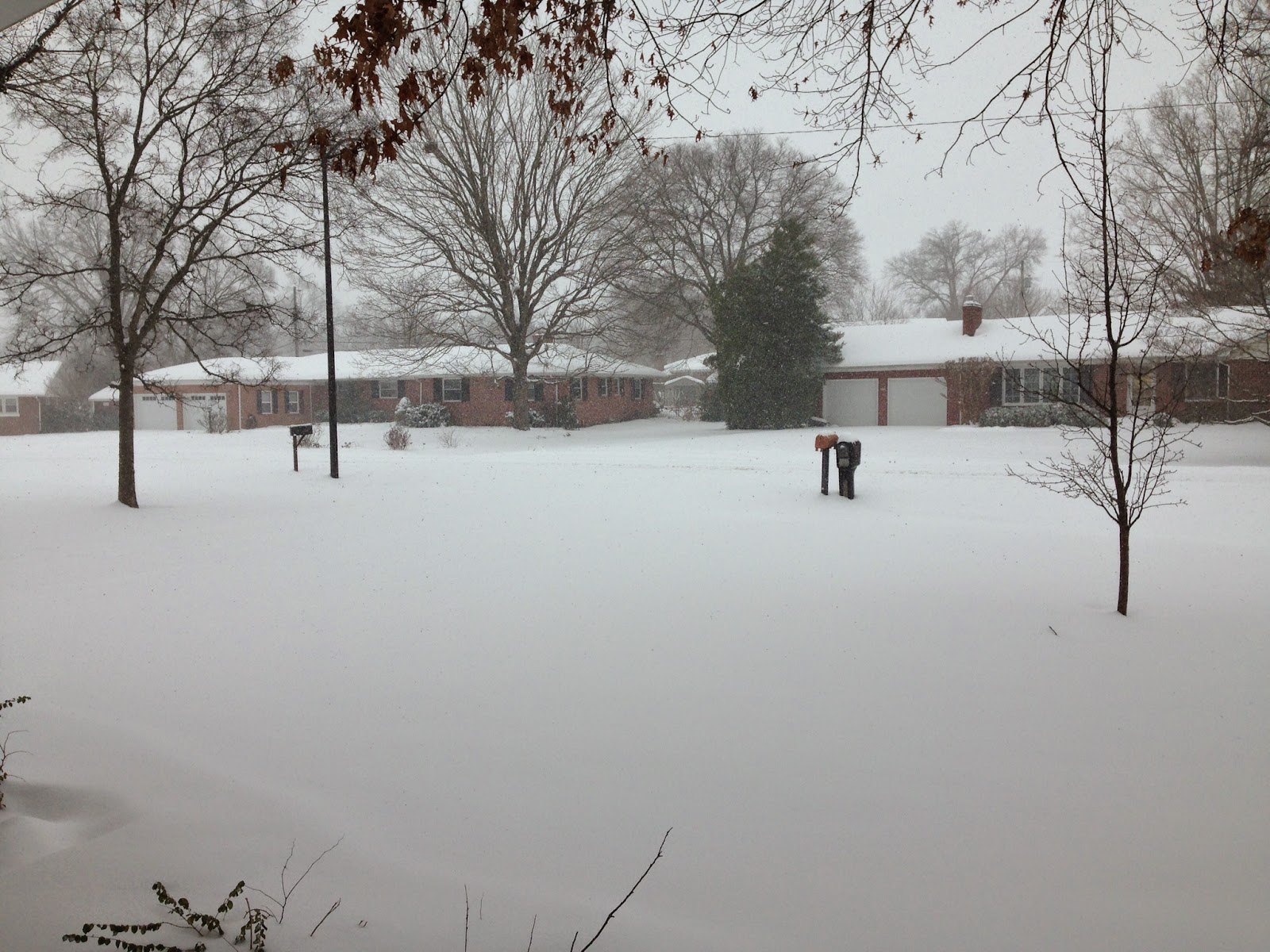 Here's a glance out of my studio window on Tuesday afternoon. I can see a little bit of my road since the sun has been shining. Fewer than 5 vehicles passed by today, and I live on a main thoroughfare of our neighborhood. There are lots of little squirrel and doggie footprints in the yard in this pic. 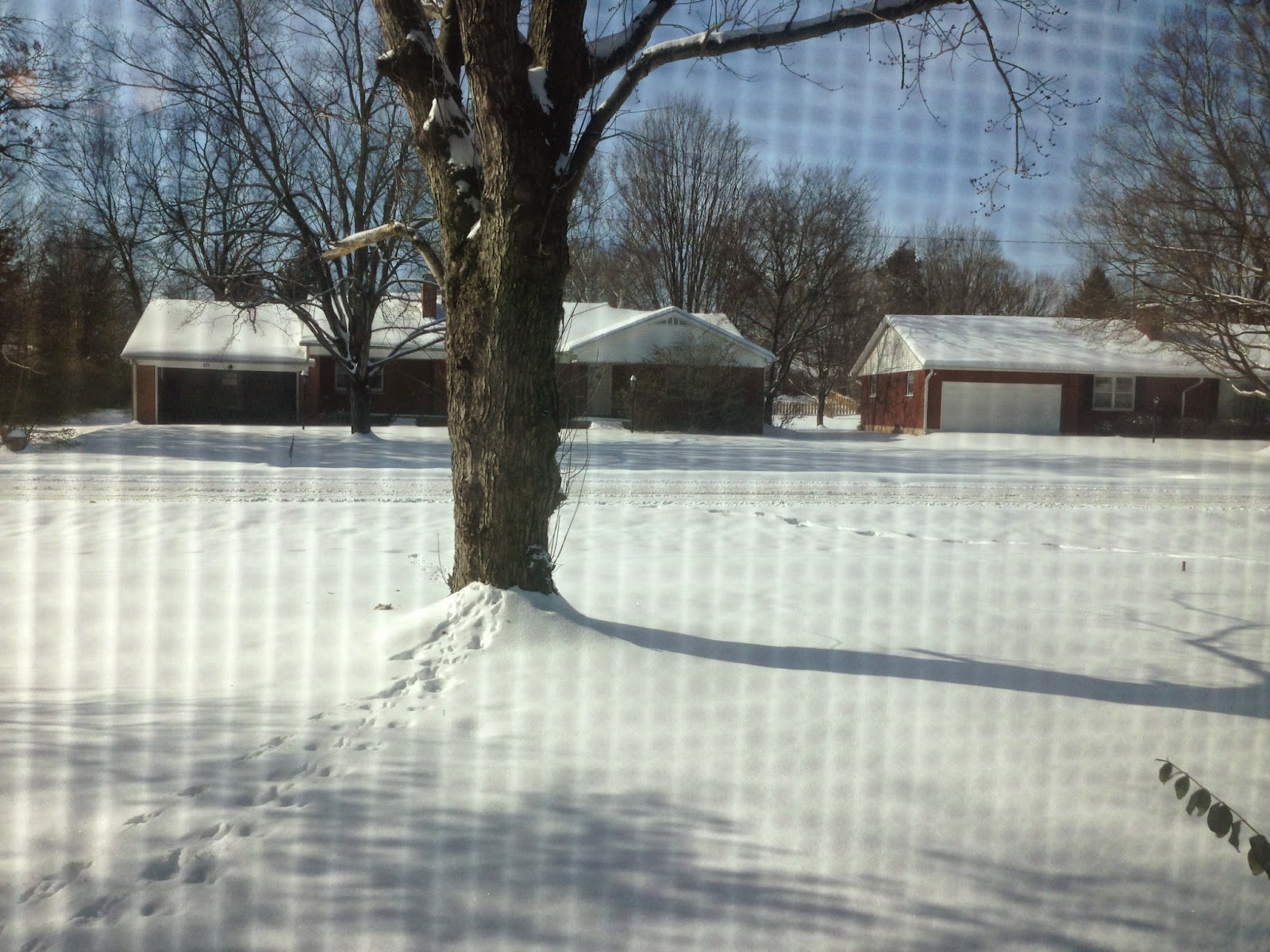 Here are some of my footprints on the patio in the snow. I was shocked at how deep the snow was, even after seeing all the pics and comments on social media. This is more snow than I've ever personally experienced in my life. I didn't take a pic of it, but the fella stopped by on Tuesday afternoon to see me after having to attend a funeral. He backed his car into my driveway and stayed pretty close to the road, but he still got stuck. It took 3 grown men pushing and me driving for 20+ minutes to get him out of my driveway. Then, on his way home to his house, he got stuck twice more and spent more than 2 hours digging his car out before he finally made it home. Can you imagine? Granted, he drives a little car, but that's still just crazy stuff. Needless to say, we did not have a date night that night as planned. We've only been able to talk on the phone since Sunday night; I'm missing him. 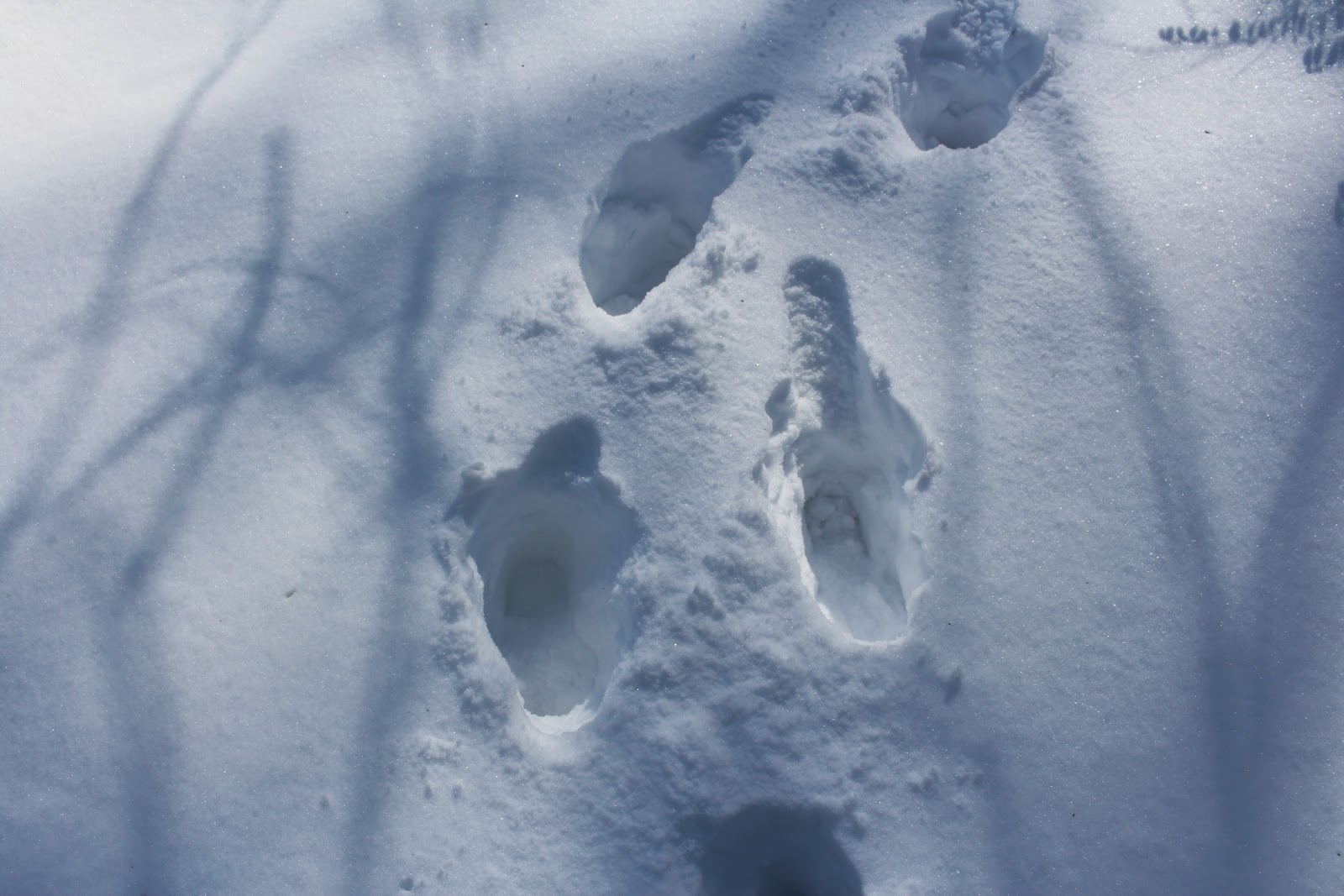 Thanks to our neighborhood facebook group, I arranged for some teenagers to come shovel my driveway on Wednesday morning. They were junior high age, so I didn't know them personally, but I did know their older siblings. For $24, they shoveled my driveway and a path from my front door to the driveway as well. 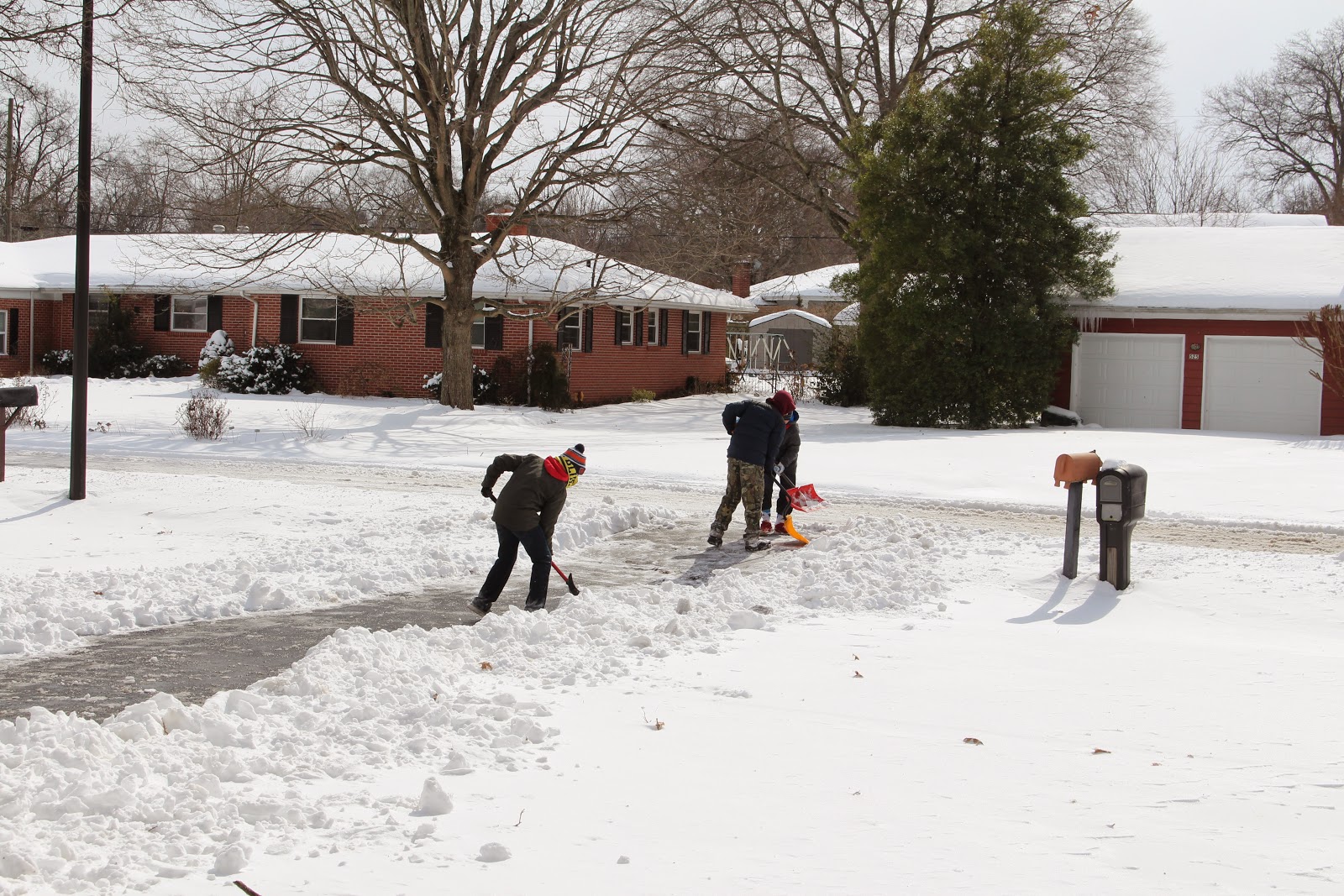 After they'd worked. I had them take their shoes off and come in to get warm before they headed off to their next job. It was a balmy 18 degrees at this point, but the low forecast for tonight is -11. (That's not the wind chill; that's the actual air temperature. Keep in mind that I live in the South.) Anyway, we chatted about weather and BGHS and world travel as they drank mocha coffee from my Keurig. Hey, I don't have hot chocolate since I don't have little kids. They were super polite and respectful and just impressive kids all around. I'm so glad I have a contact person in case I need yard work or help with other things around the house. I sent them over to my 90-something neighbor's house, Miss Daisy, across the street so they could work for her as well. As I suspected, she had them shoveling in no time. :) I bet they made a killing in our neighborhood this week since many of the residents are elderly. (I'm not elderly, but this girl does not shovel.) 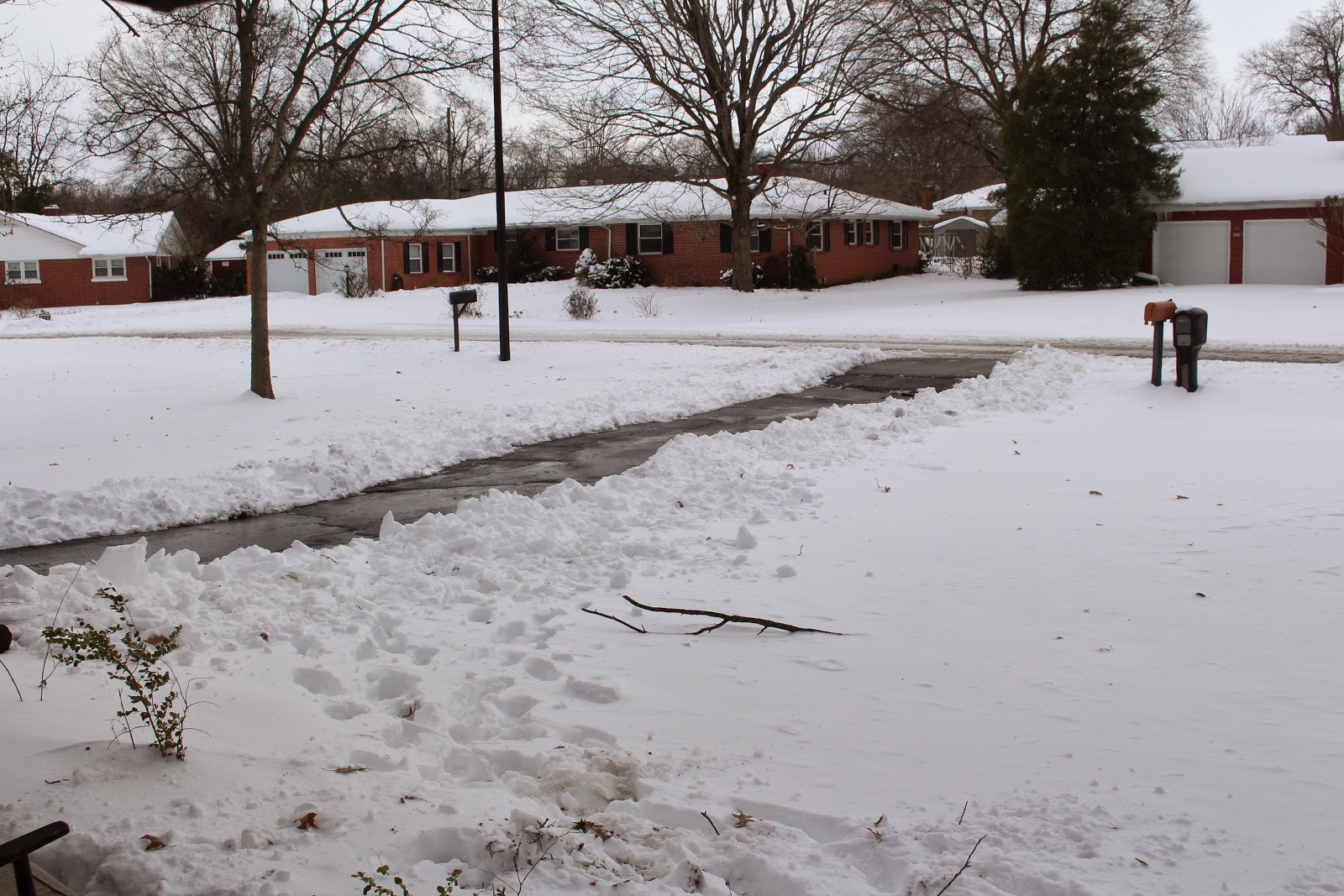 After they left, Charlie-dog decided to go on a bit of a walkabout. He was so excited by the prospect of being able to travel further than 5 feet from the front door. He paraded down the driveway and then down the street and then into several different neighbors' driveways while I called his name and cajoled him the entire time. My right and left hand neighbors happened to be out with their dogs at the same time, and they joined the chorus for Charlie-dog to come home. 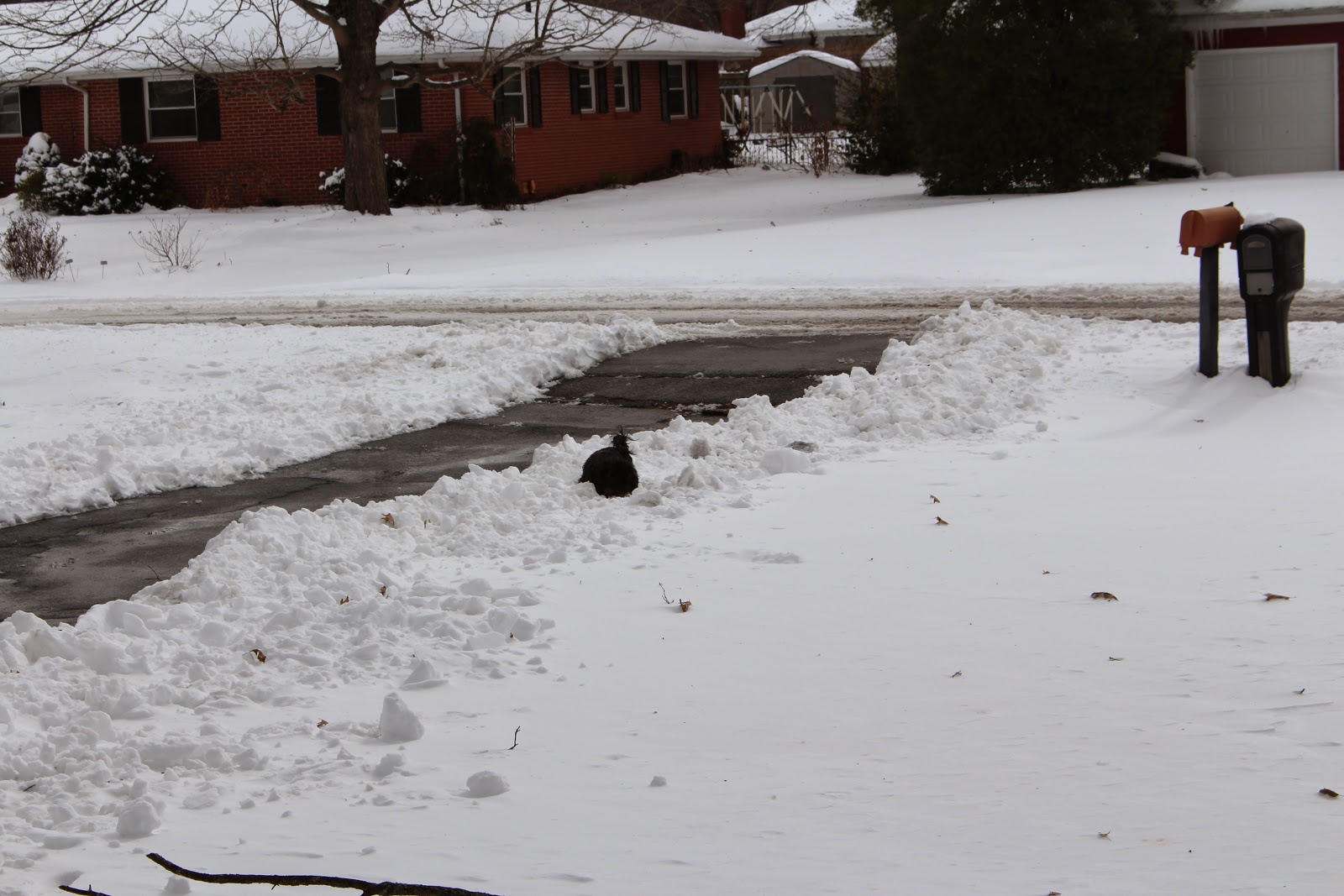 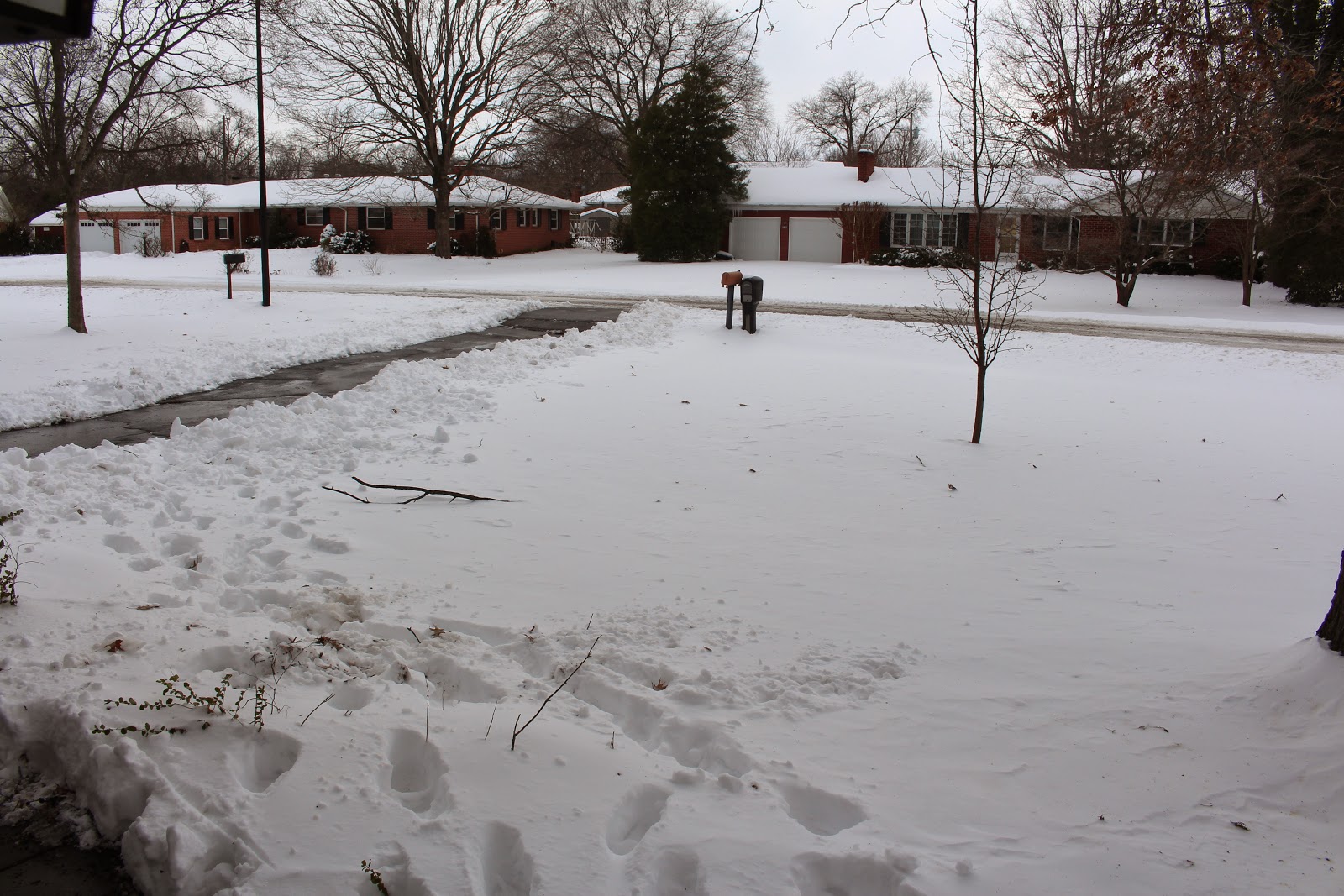 After his walkabout adventure, he finally returned home. Charlie-dog is no fool; he knows exactly where his toys and food and warm bed are located. 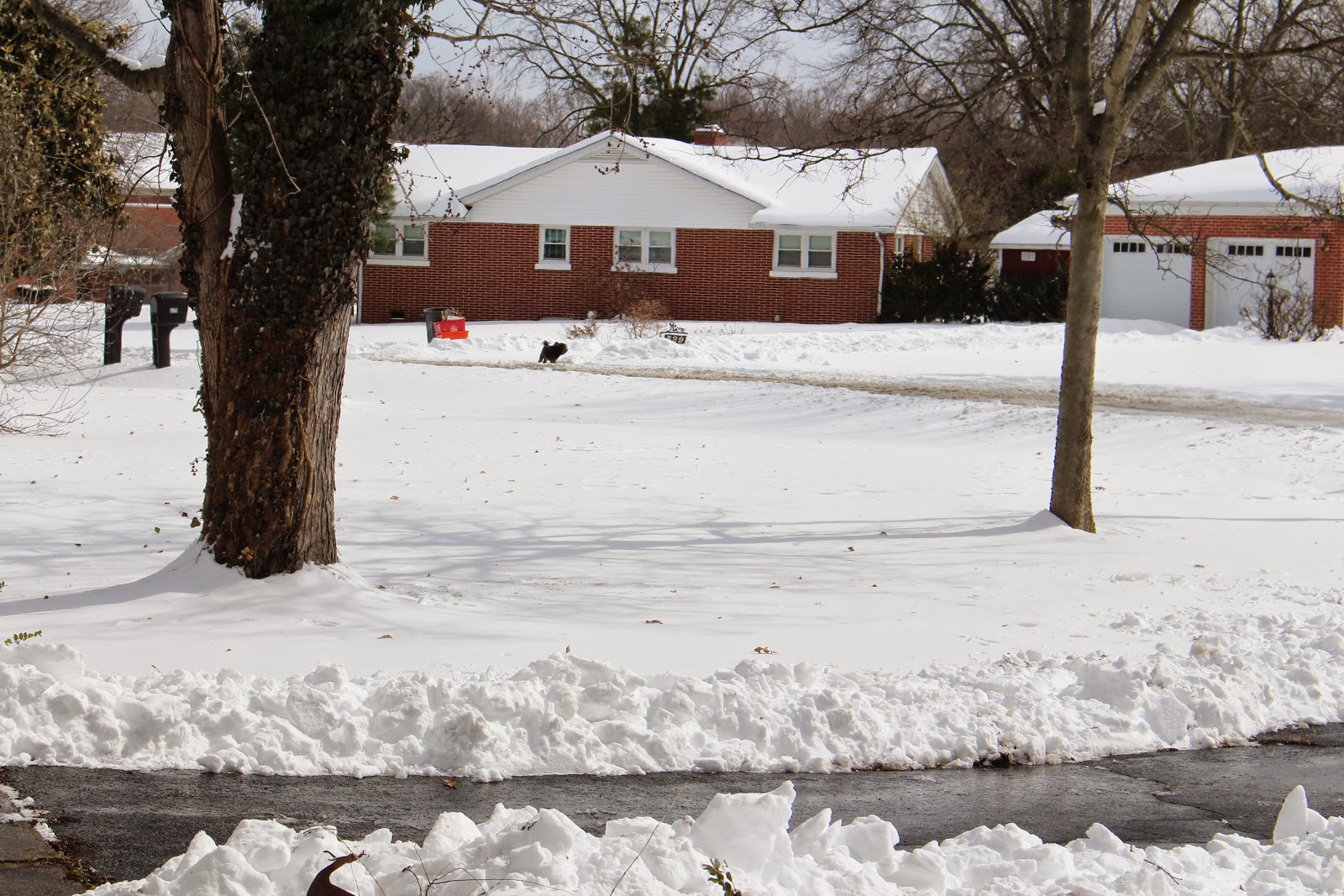 After the taxing few minutes they each spent outside, it was time for some snuggles on the chaise lounge and another long nap for each of them. I've spent the last few days taking naps and watching tv and getting crafty, and I've enjoyed every minute of it thus far. If it weren't so cold and miserable, these would be the perfect snow days. Hahaha! 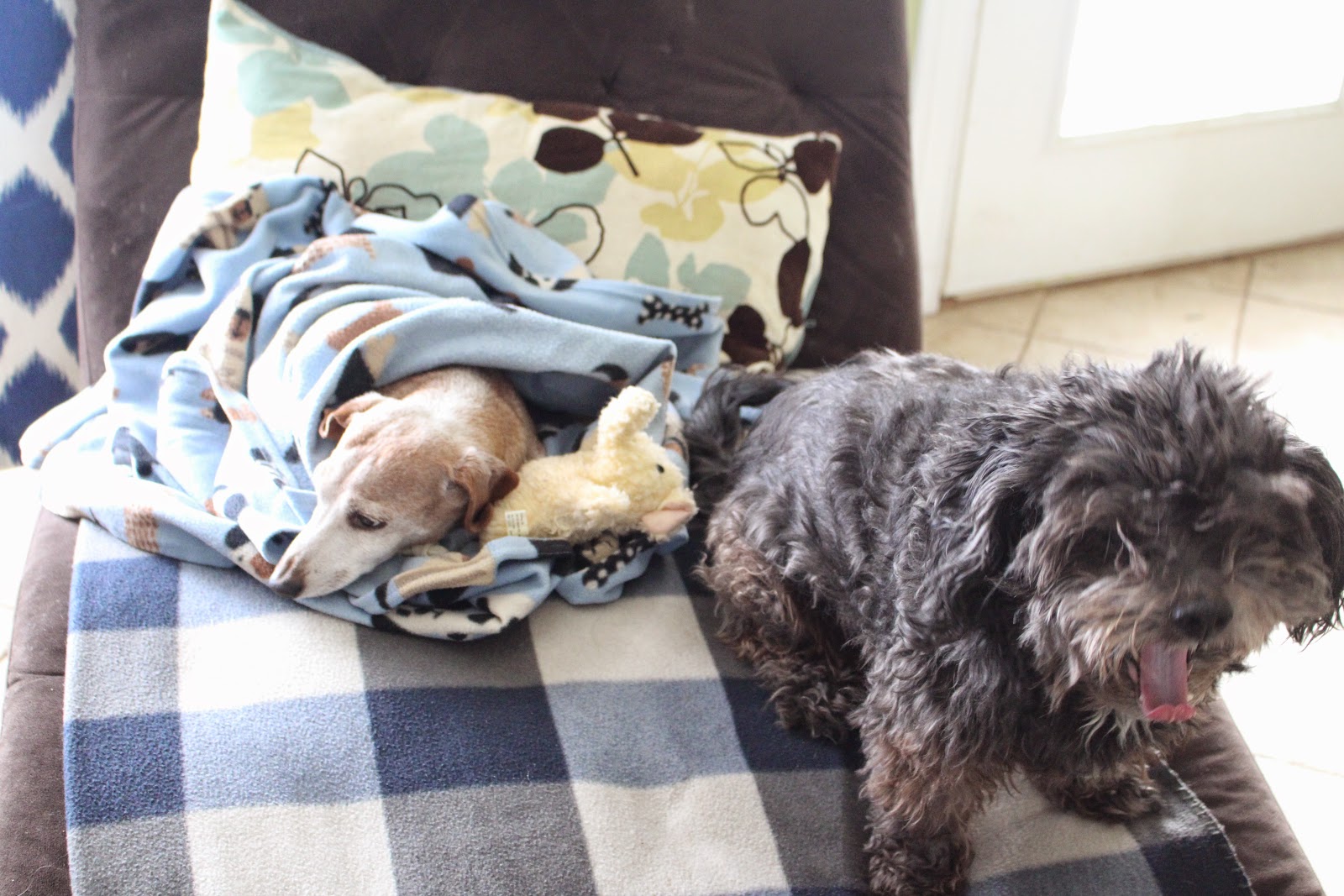 I hope you are safe and warm wherever you are. Winter will come to an end eventually, right? That's the thing that gives me the most hope right now. :)

Email ThisBlogThis!Share to TwitterShare to FacebookShare to Pinterest
Labels: Home and yard, Seasons