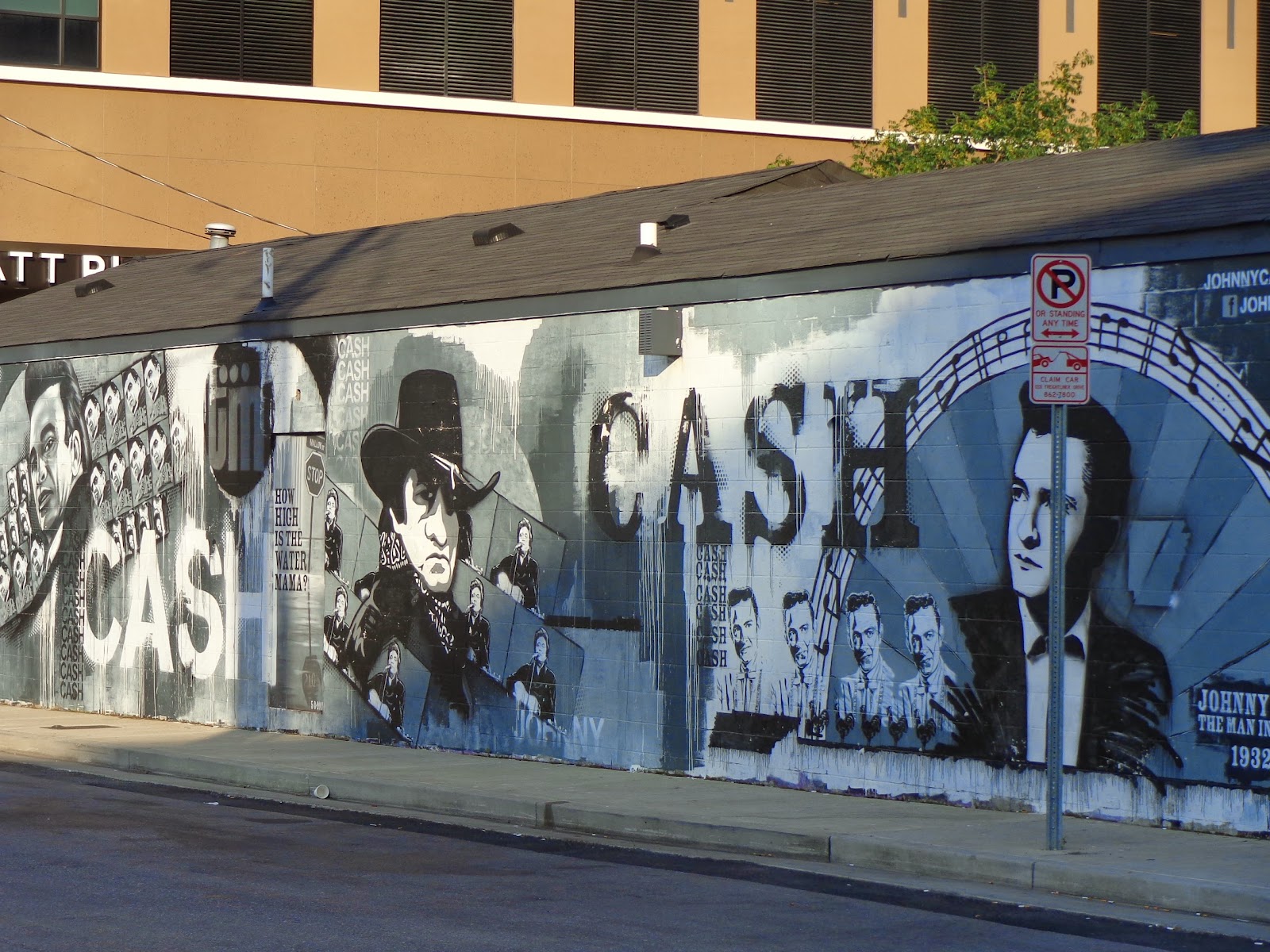 When the fella suggested we go to Nashville for dinner and fun times, I was ready to go in a heartbeat. He actually lived there for most of his adult life after going to graduate school at Vanderbilt, so these were his stomping grounds so to speak.

We started by parking and taking a stroll around the SoBro area of downtown - South of Broadway, a real spinoff of the SoHo area of NYC I think. Because he knows me well, he willingly helped me snap a selfie and then took a pic of me in front of this cool Johnny Cash mural. 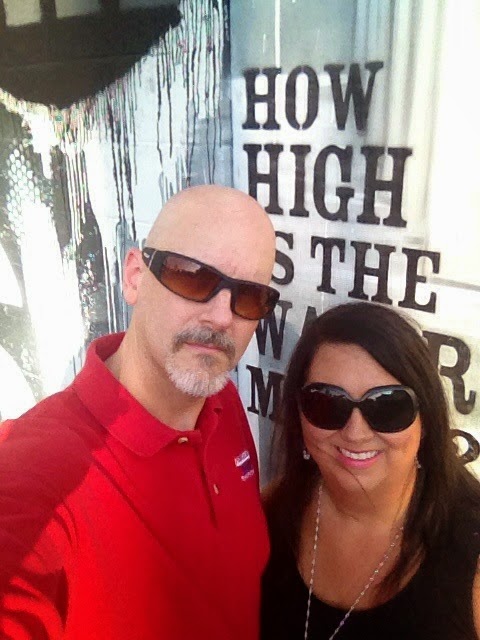 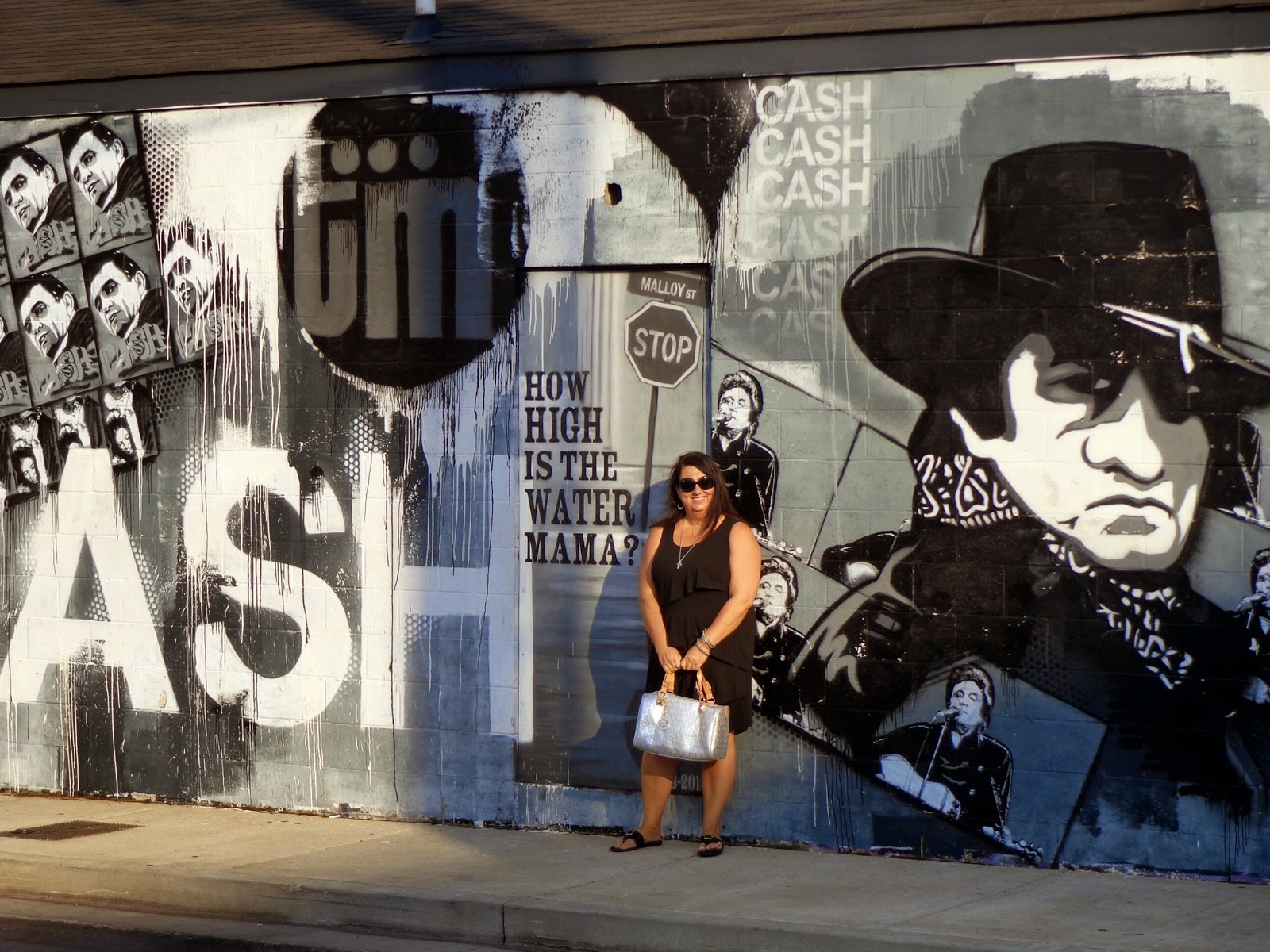 I could seriously hold a photoshoot just against this mural. Wouldn't it be cool with a pop of red in it? Of course, I didn't know that when I got ready for the evening. Lol! (Btw, I'm channeling my middle-aged, voluptuous version of Kelly Purkey in this shot, and I totally crack myself up!) 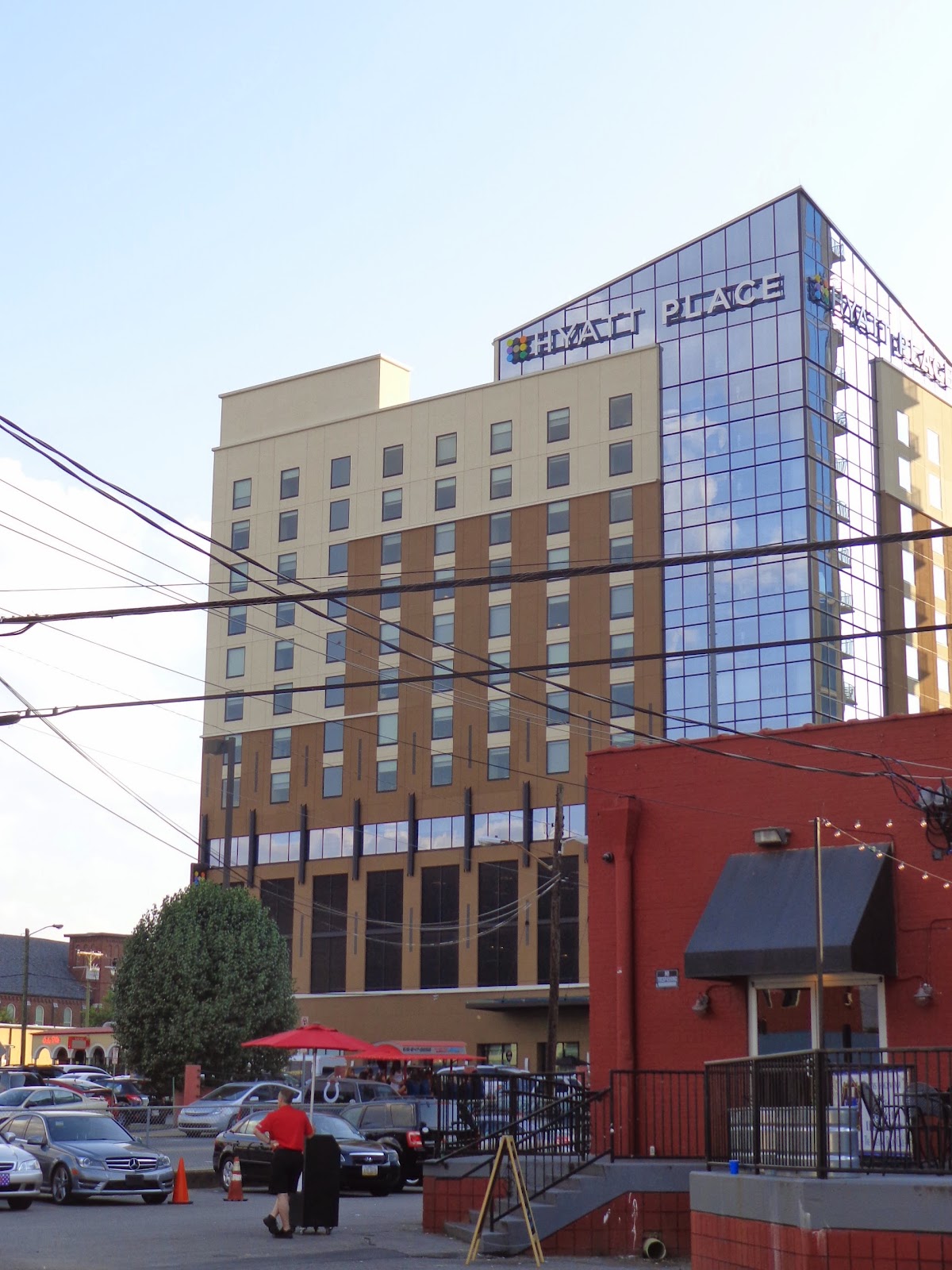 The fella made reservations for us at a swanky little Italian place adjacent to Hyatt Place. I thought I'd snap a pic of the building to remember it for future reference. 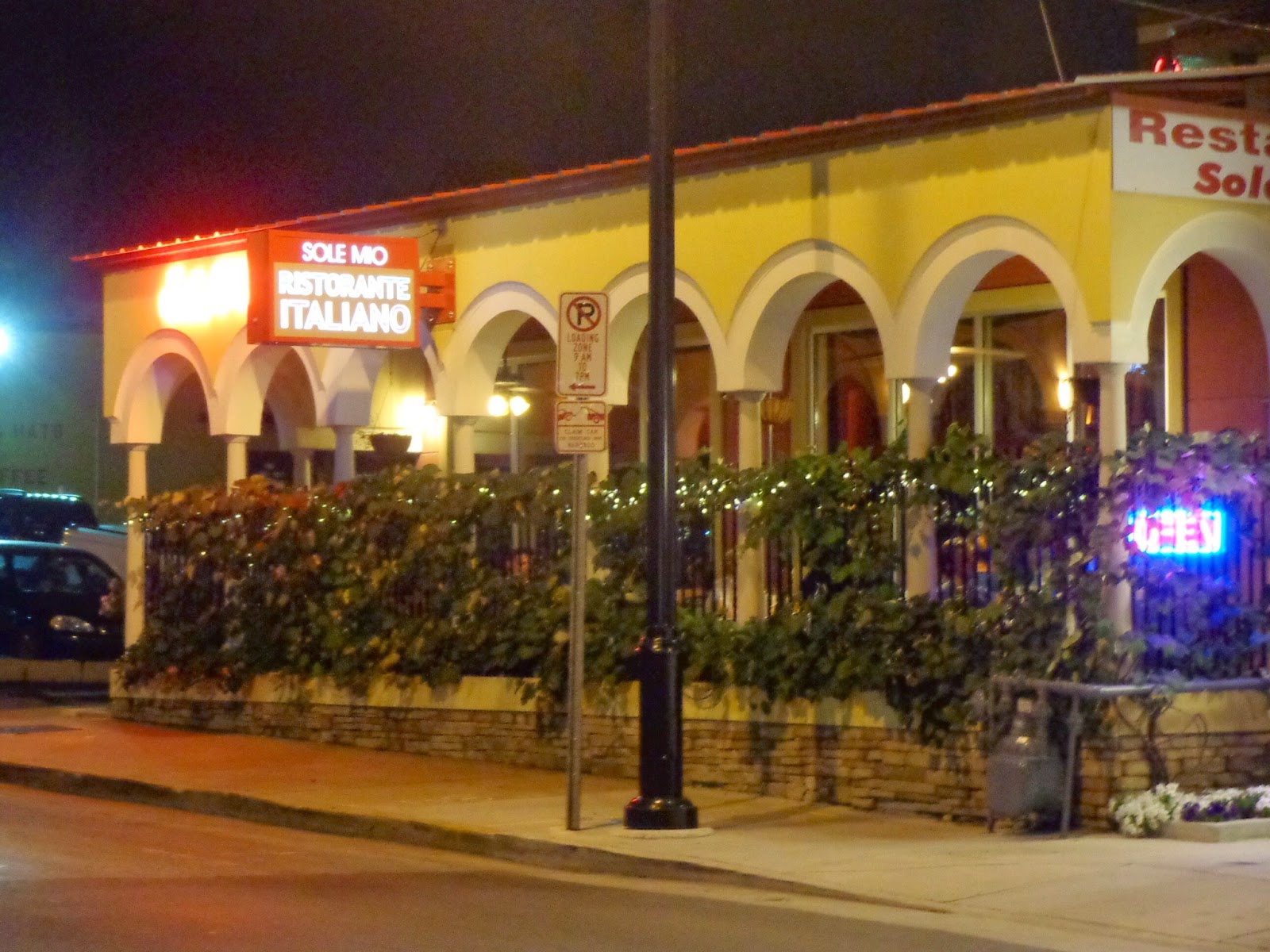 Here's the outside of the restaurant. I really wanted to take a pic of the food and the interior, but I kind of chickened out. It was just too swanky and intimate of a setting to whip out my camera. Lol! I told the fella this later on and he totally thought I should've taken pics anyway. Lesson learned, I guess.

He went with the lasagna while I chose the Mamma Rossa sauce with chicken over linguini. Their bread was amazing too! I kind of wish I'd tried the salad, but at least we didn't have to wait long for our meal. I also indulged in a sweet, sparkling moscato that was just fabulous. 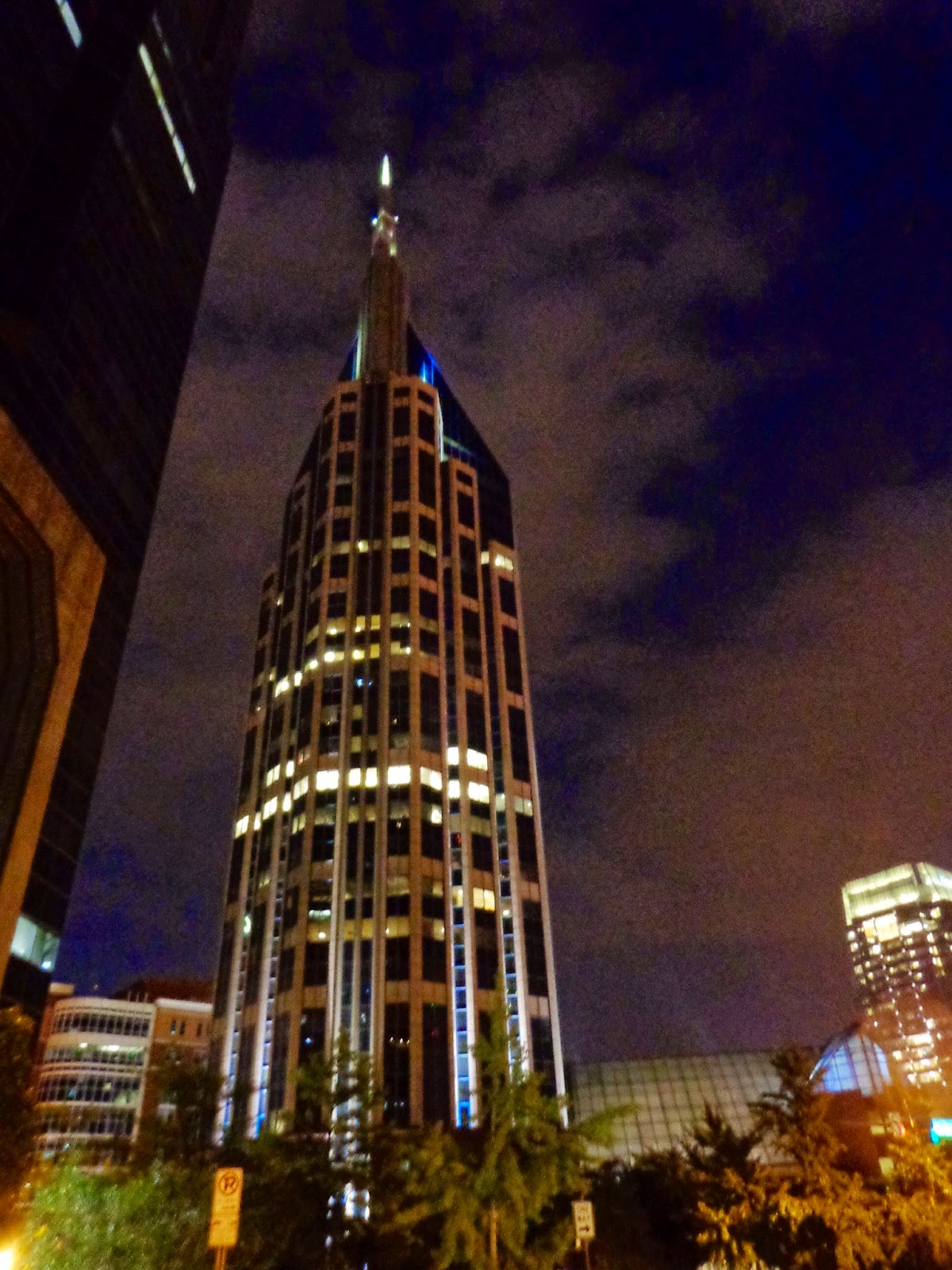 Here's a pretty cool shot of the 'Bat Tower' (AT&T building) that is probably the hallmark of Nashville's skyline. 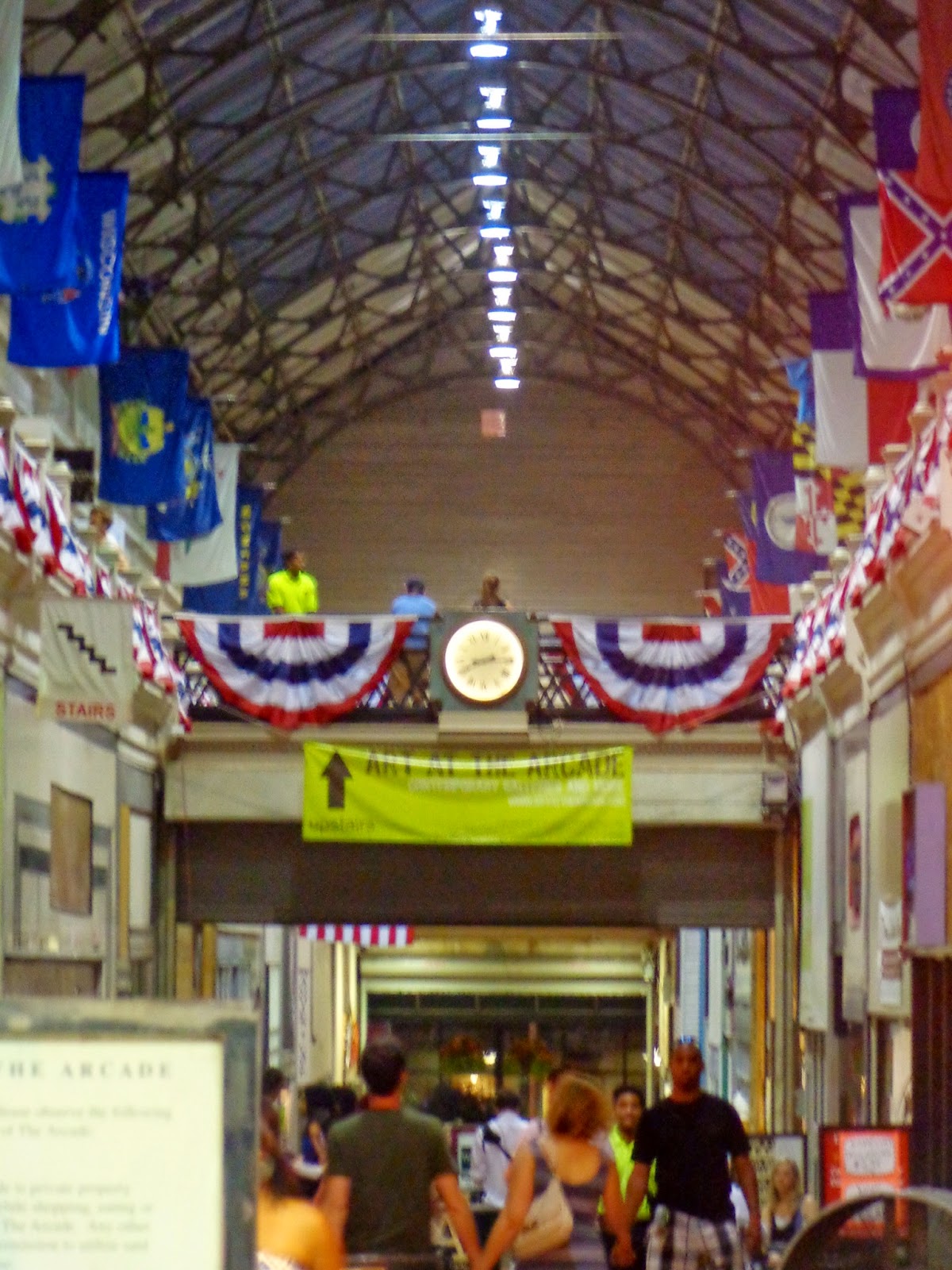 After dinner, we walked over to the Arcade, Nashville's first shopping mall from the 20s. The first Saturday of each month, they have a lively art crawl with about 15-20 galleries open to the public for free. I'd never been to anything like this before and was super excited about visiting it. 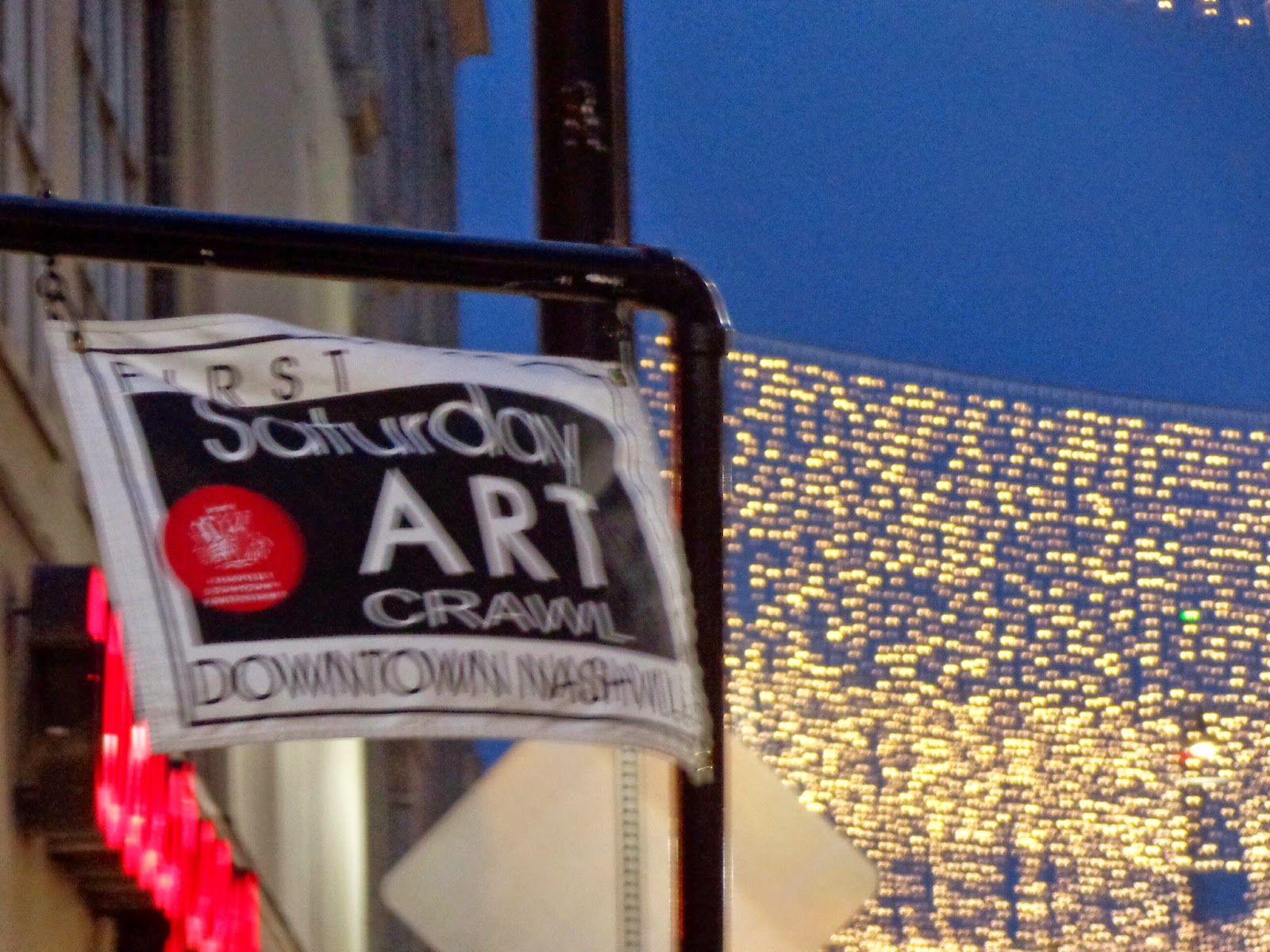 Unfortunately, it was pretty windy which made getting a good shot of the street sign almost impossible. Note to self: I need to find a crisp pic online and grab it for my use. (Just keeping it real, people.) While it wasn't a very hot evening for early August in the South, I managed to work myself into quite a boiling state. In fact, I ended up not just being hot from the hike around downtown, but I also had a major hot flash. For ladies of a certain age, you know exactly what I mean. It was so bad that I actually had to leave the galleries before I was ready and just stand in the street to try to cool off some. The fella tried to wipe the sweat from my face at one point! Um, no, don't touch me! Lol! He prob thought I was a nut. All I know is that I felt like I couldn't even breathe because I was so overheated. 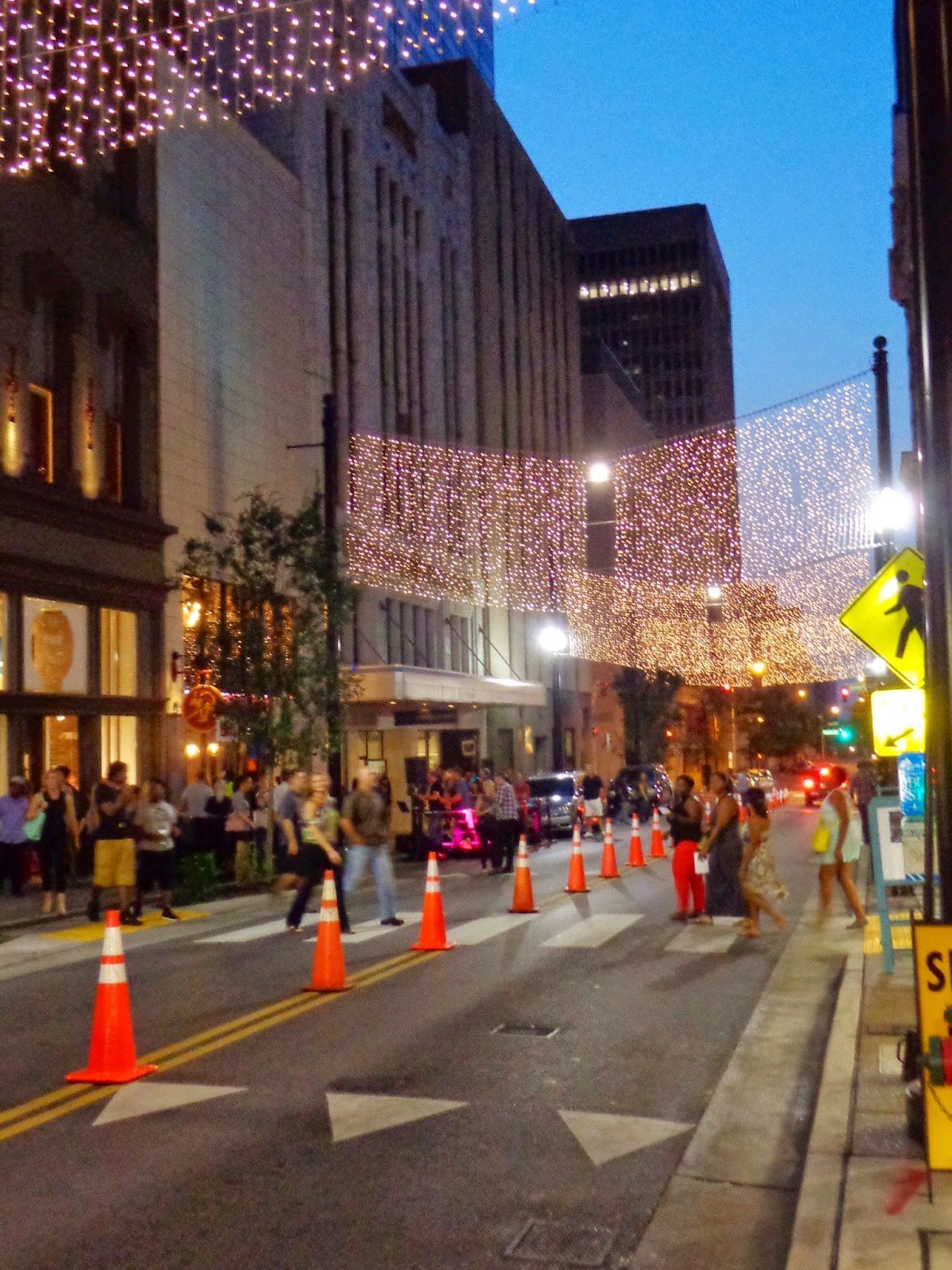 Here's a view of the street where most of the galleries were located. I loved the lights strung up for decoration and that the street was blocked off from thru traffic. There were food trucks set up to sell to the crowds and live music in the street. Many of the galleries served wine/beer, but I ended up so hot that I couldn't even stop to enjoy any.

The fella was a good sport and didn't make me feel guilty about wussing out as a result of my hot flash. We sat in the courtyard of a large hotel and chatted a few minutes before heading back to our car, but the evening wasn't over yet. 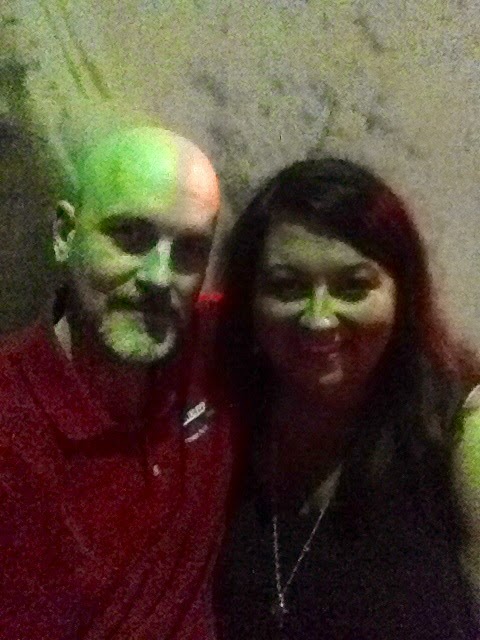 Our last stop was the planetarium at the Adventure Science Center where we watched a laser light show to accompany several Led Zeppelin tunes. This grainy iphone selfiewas all we could manage in the dim light of the center, but I'm still glad that we took it. The laser show was different than anything I'd ever seen before, but I'm not sure I'll repeat it. At one point, I was pretty sure they'd send me reeling into a seizure or at least into a migraine. Thankfully, neither thing occurred.

We had a great time, but I was so worn out that I sort of fell asleep on the hour long ride home. It's a pretty good thing that the fella didn't seem to mind too much.  I can't wait to go back to Nashville and explore a bit more; I hate that it's so close, and all I seem to know about it is the shopping. :)
Posted by Tiffany Lowder at 12:00 AM